Encolpion Triptych Akimov 104.020 «The Saviour Not Made by Hands» 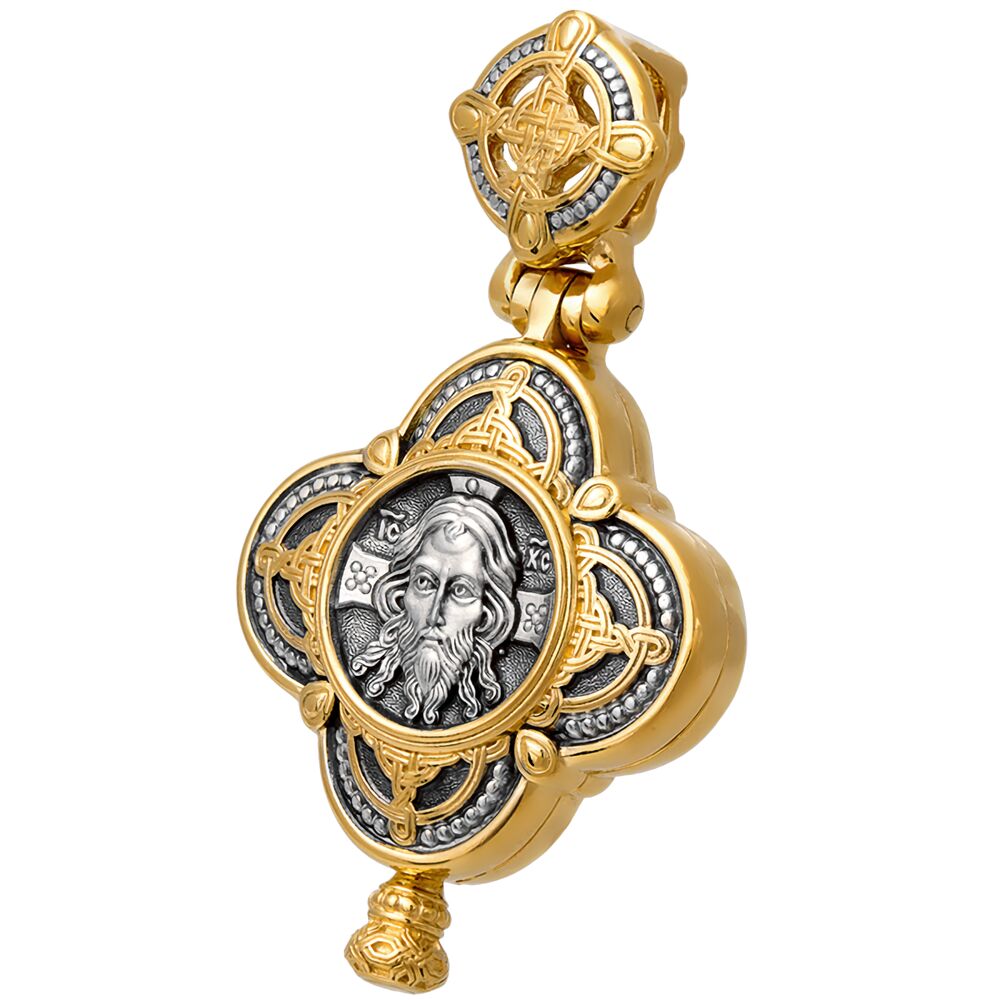 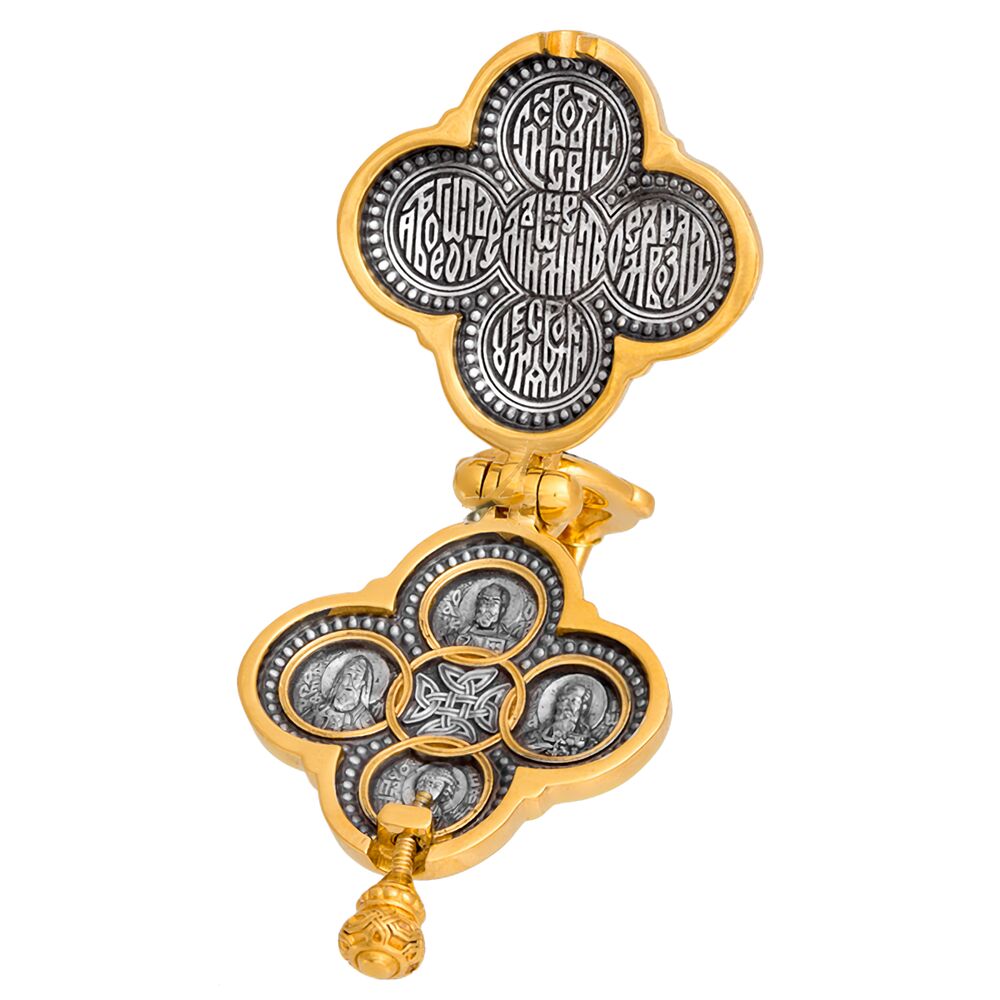 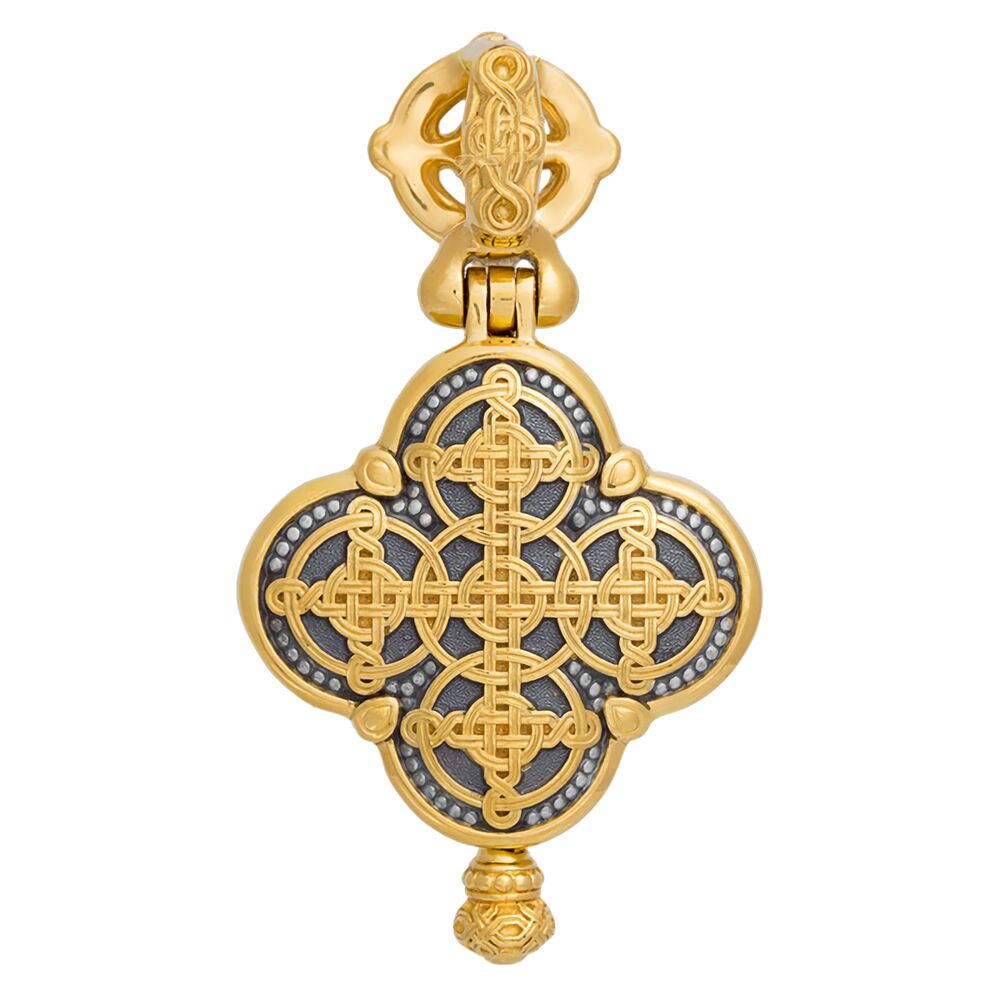 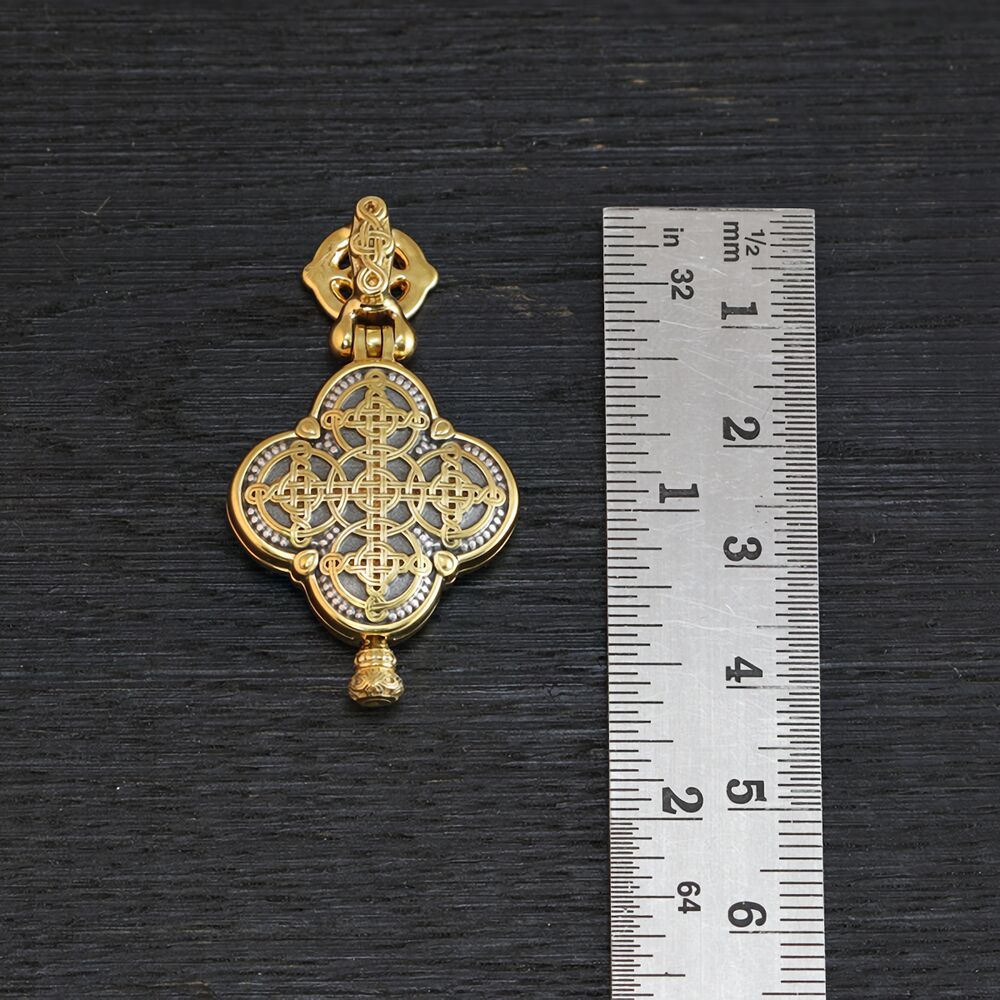 "Shrine cross, or encolpion (in Greek.) came to Russia from Byzantium and were designed for keeping parts of relics and other sacred things. The most wide-spread were cross-shaped and icons decorated as they combined the power of several sacramental things to be worn on ones breast. Shrine cross protected the person and at the same time sanctified and healed him by miraculous Divine power provided jointly by the cross, icons and relics.

This cross with the Vernicle Image of the Savior on its obverse and the icons of the saint wonder-makers on the inside of the fold is designed according to old traditions of Christian Church. The cross consists of five circles. The circle is a symbol of eternity, of heaven and of Christ Himself Who, according to Clement of Alexandria, is an “endless circle wherein all forces meet”.  The total number of icons – five – corresponds with the number of fingers to form a sign of the cross: three of them symbolizing the Holy Trinity and two ones meaning Christ image, and God-manhood. By the Holy Fathers’ definition equilateral cross formed by a circle symbolizes Christ and His victory as well as Heaven and four ends of the world being unified in Christ.

The symbolism of the cross shape is supported by Christian traditional wattled ornament. Its intricate tracery composed of crosses and circles shows interrelationship of the Divine and created to coexist “unconjoint and undivided“ in the world transfigured by God. It is not the Church art way to show the real world striving against evil; its way is to display the eternal life, the Kingdom of Glory embodied by Christ.

The Vernicle image of the Savior on the cross obverse is the greatest Christian sacred thing (lost in1204 during plunder of Constantinople by crusaders). By legend, after ablution the Savior has wiped His face with a piece of canvas whereupon it imprinted miraculously. Christ has given His image to a servant of Abgarus, the leprous King of Edessa. The image has healed the King and converted him to Christianity. This miraculous healing was the first to be worked not by the Lord Himself but by His image. It became the sign of Church images sanctity and of its icons wonder-making.

The Lord endowed the people who became like Him in sanctity with similar wonder-making power. He conferred on them the grace of the dead to be resurrected, of the blind to be recovered, and of invalids to be raised by His name.

St. Nicholas († 342), the Archbishop of Myra in Asia Minor, is worshipped in Russia more than other holy God-pleasers. His icon is placed inside the cross in the upper circle. When living the saint subdued storms, healed invalids, prophesied future and time and again relieved the destitutes miles away. He cared diligently of the spiritual development of congregation that God entrusted to him. He supported people with his prayers, helped, saved and bestowed great charities. Among the first and the greatest wonders was that made on the way to Jerusalem when he resurrected a sailor who fell down from a mast. The saint is commemorated on May 22 and December 19.

The icons of other wonder-makers are connected to St. Nicholas with wattled cross and circles symbolizing eternity and unity in Christ. Downstairs there is St. St. Pantaleon (Panteleimon), the Great Martyr who has become famous for being an unmercenary healer. He anointed the sick persons with oil and healed them through appealing to Christ. His first wonder was to resurrect a boy deceased of snake bite. In 305 St. Panteleimon was decapitated for preaching Christianity The saint is commemorated on August 9.

On the left and on the right there are images of Russian wonder-makers.

St. John of Kronstadt († 1908) is pictured in clerical garment with the Eucharist chalice in his hands. The prayer of him was so powerful that he was able to heal a sick person miles and miles away or even by telegram; and once he resurrected a dead in the sight of medical board. The saint is commemorated on January 2.

St. Seraphim of Vyritsa († 1949) stands beside in schema. His prayer Christianized even belligerent atheists and official of Cheka at the time of Church being persecuted, as well as fascist invaders during the Great Patriotic War, thus protecting Vyritsa inhabitants against prosecution. He as well revitalized a deceased child and made many other miraculous healings. The saint is commemorated on April 3.

“O Lord, we shall go illuminated by the light of the Your Holy face, and shall rejoice on Your Holy name unto ages of ages” – with these words of the Celebration of the Vernicle Image of the Savior that are scripted beside their icons the saints are as if praying. “Oh, Christ Cross, you illumed splendidly all in the world!” Another great saint Theodore Studites († 826) exclaims: “Oh, the Cross of Christ, you illuminate the entire world in the most resplendent way! Lavish grace is offered to everybody; a source is shown wherefrom consecration flows, and wherefrom everyone zealous for bounteous blessing may drink”."