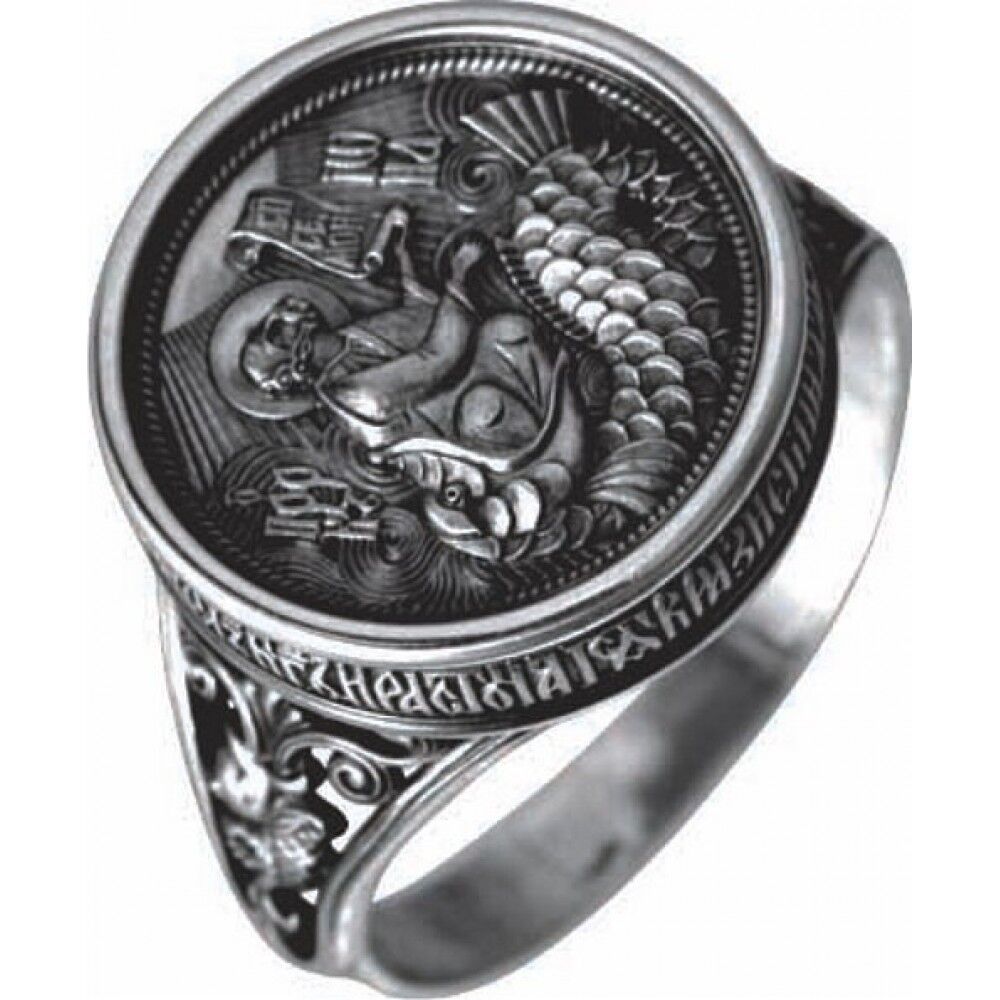 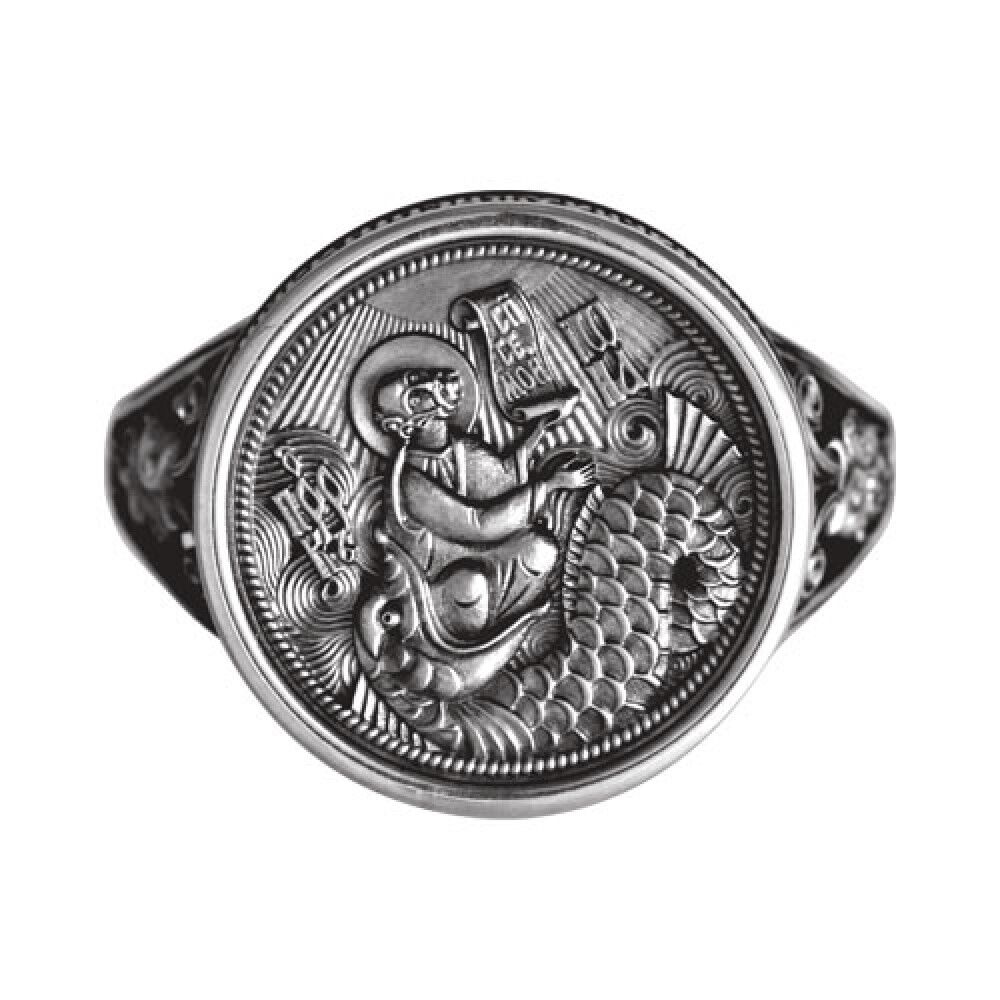 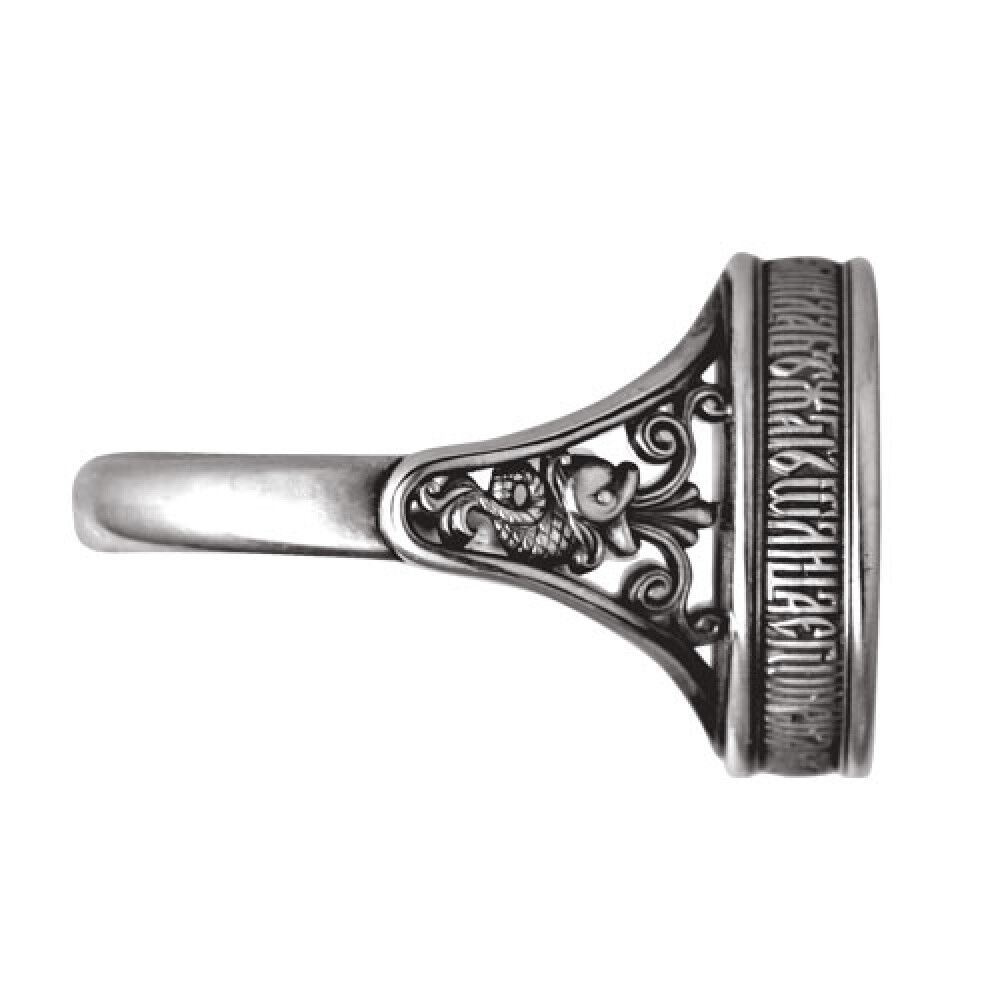 "Guard ring with the image of St. Jonas, Prophet is made in old traditional shape having been known since antiquity time. These rings had the widest distribution in Middle Ages, especially in Orthodox Byzantium. The saints were depicted there, as well as the prayers and various dedications and entreaties for protection and patronage were written. Such a ring was undoubtedly not only an adornment, but also a sacred thing, thus permanent wearing of it was not the rule: the ring should be taken off when doing any dirty work.

Christ image is almost never met on the guard rings. It is replaced by symbolic prototypes, Prophet Jonas being one of them. It was he to whom the Lord compares Himself when talking to scribes and Pharisees who demanded a sign from Him. “For as Jonas was in the whale's belly three days and three nights: so shall the Son of man be in the heart of the earth three days and three nights” (Matt. 12, 40),  - He answered them, foretelling His Crucifixion, descending to Hell and Resurrection.

Holy Prophet Jonas lived in 8th century B.C. His Book is included in the Old Testament and contains prophecies on destiny of Israelites, the Saviour sufferings, Jerusalem desolation and the end of the world. The book also narrates of the Prophet being sent by God to Nineveh, capital of Assyria (Jonah 3, 3-10) for preaching penance.

God sent Jonas to herald His intention to annihilate Nineveh, if the men of it did not do penance, as ungodliness and unrighteousness of them grew to excess, iniquities surpassed the limit of Divine forbearance; and invoke for vengeance.

It is known from the ancient history that Assyrians at that time indulged in all conceivable vices, plundered neighbor lands, killing the inhabitants and devastating entire countries. They were extremely savage and haughty. Therefore, this is no surprise that Jonas tried to evade the Divine mission, and to sail away to Tarshish. But a horrible gale burst out at sea, and the prophet realized that it was he who provoked God’s wrath. He repented and supplicated the seamen to throw him into water. And at Divine command he was there swallowed by a whale. Getting free from the whale's belly Jonas set off to Nineveh and with inspired preaches managed to convert the inhabitants to profound penance. Then he sat down by the town walls and started waiting for Divine retribution. However the God revealed to him that He never punished those who were repentant, since He loved all the nations equally and cared for everyone salvation.

The story of St. Jonas became one of the favorite subjects in Christian art as it exemplified the Divine mercy to repentant sinners, and the antitype of Christ Resurrection.

On the ring the image of St. Jonas is combined with the words of psalm 67, that became the beginning of the prayer being said at various fears, evil forces aggression, and at any danger: “«Have the Lord resurrect, and His enemies dissipate, and those who abhor Him flee away from His face!” The guard prayer words are braided around the images of Jonas and whale. They form an ornamental girdle that is organically included in artistic image of the piece and emphasizing the protective function thereof.