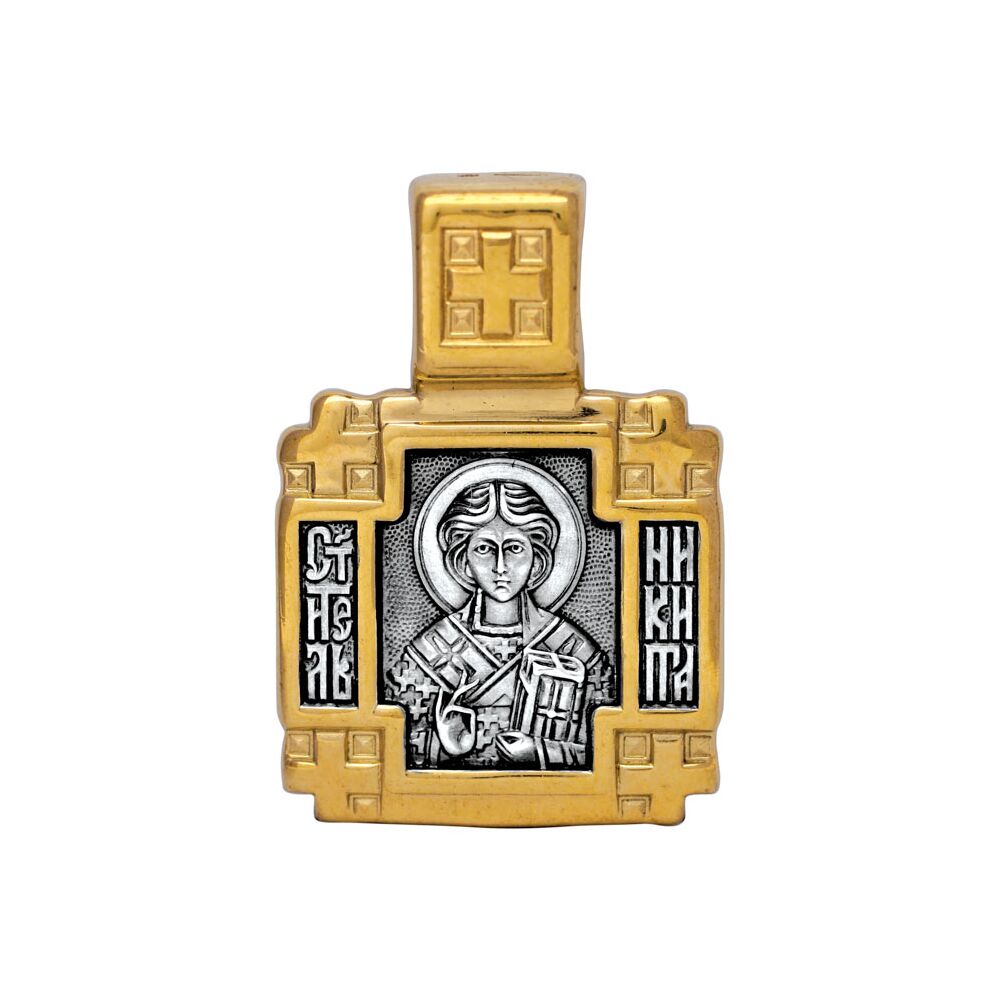 "On the obverse of the locket there is the image of the Holy Hierarch Nicetas, the Bishop of Novgorod, that of Guardian Angel being on the reverse. The square shape has an ancient symbolism and means ground where Holy Hierarchs and are placed into the image of Christ, as human shepherds and preceptors in Love and Truth. Many of them were God gifted with wonder making. St. Nicetas, being the Bishop of Novgorod from 1096 till demise, was such a wonder maker healing soul and bodily diseases both in his lifetime, and after death.

Nicetas started his spiritual way as a monk of the ancient Russian monastery — Kiev-Pecherskaya Laura (the Kiev Lavra of the Caves). Russian monasticism was then at the first set-out, therefore many did not know how dangerous practicing great austerity and mortifications might be if it was conducted without proper spiritual guidance. Firstly Nicetas as well made a mistake that in clerical tradition is called “a temptation”, and that resulted for him in a dangerous illness.

Without permission he withdrew into seclusion in a cave, slept on a stone and stinted himself in food. Soon he started to hear voices and smell unusual fragrance. And once as if the voice of God resounded: “I shall send an Angel for you to perform his will in everything”. But in the guise of  the God's Angel a demon came to him saying: “Nicetas, my boy, you should not pray any more. Now I shall pray instead of you” – and ordered him to read the Old Testament and to listen to his conversation”. Since then Nicetas had always seen the praying angel, and quite stopped to pray. He memorized the Old Testament, and began to prophesy through the demon. Crowds of pilgrims poured fourth to the cave of the newly “elder”. Nicetas was rapidly becoming a celebrity.

But all this put the experienced monks on their guard, and they started praying for Nicetas by all the clergy. By their prayers the demon was driven out. The cave was broken into, and Nicetas found smiling inanely and gazing around: he forgot everything and even how to read; they had to teach him all over again like a baby.

St. Nicetas mourned his sin over, and started going up the spiritual ladder from bottom up but this time with humility of mind and with obeyance. After long period of ascetic monastic life he was elevated to the Novgorod archiepiscopal chair, and was God endowed with the veritable gift of wonder making. In 1558 the relics of the Holy Hierarch were found incorruptible, and he was canonized. St. Nicetas has been beardless, and is so depicted on icons.