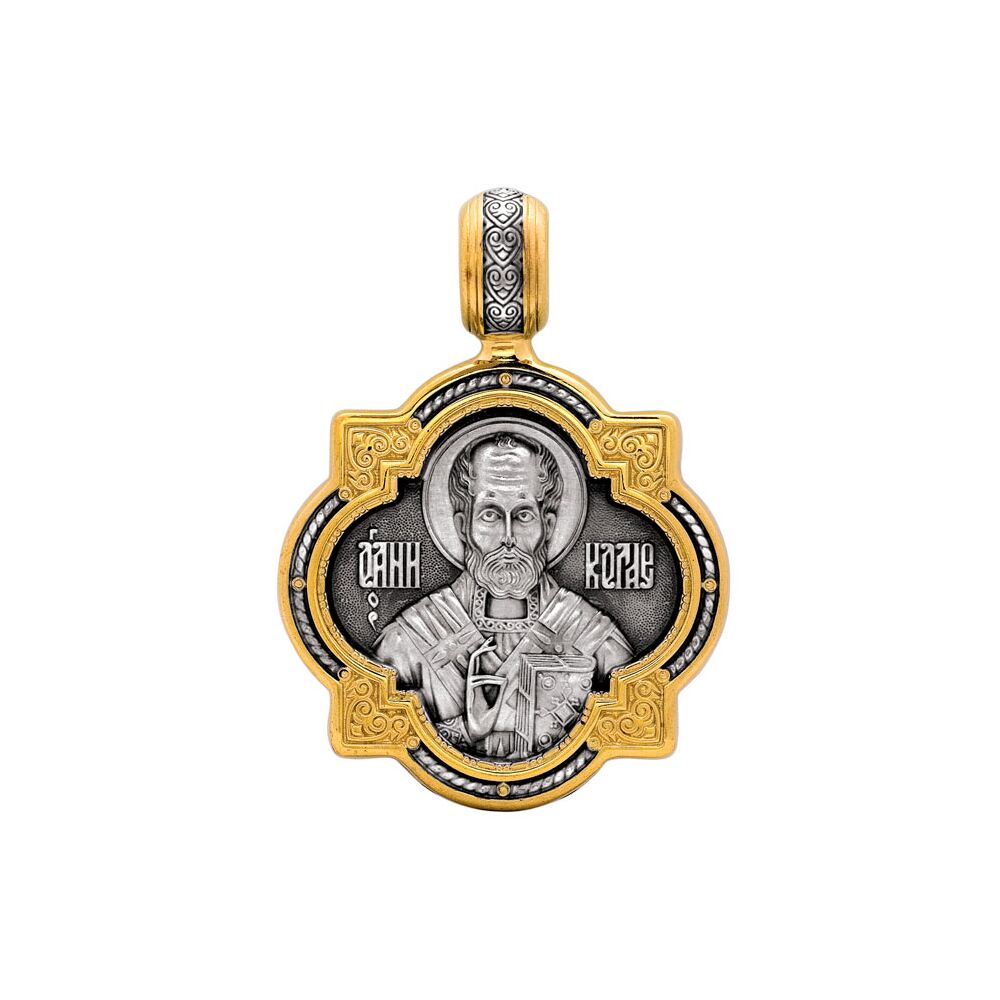 "St. Nicholas is the most revered saint in Orthodoxy. He is particularly loved in Russia. He is often called Nicholas the God’s Pleaser, or simply Nicola, and considered the main helper in any business, and the main defender in any misfortune. Enormous number of variously shaped large, small and folding icons, lockets, and sculptures with the image of this saint, made of various materials reached us from antiquity.

This  icon is not a copy of any old piece, but carry on tradition of worshipping the great saint. Silver cast it has the quatrefoil shape that symbolizes the unity created and eternal things. On its reverse НИКА is written around the equilateral cross, which means “I overcome”.  That is the symbol of St. Nicholas himself whose name means “he who overcomes people” in Greek. The Holy Hierarch overcomes human sins through his wonders worked by the power of the Cross of the Lord; purifies human souls in devotion to God; and saves them for futurity. The reverse is edged with first words of the troparion to St. Nicholas: “As being the truth of things, show the rule of faith, and the example of meekness, and abstemiousness of the teacher to your flock”.

St. Nicholas was born in Patara of Lycia in Asia Minor about the middle of the 3d century. He was born with extraordinary gifts. A legend exists that being baptized he has been standing unsupported in the bowl for three hours. From a boy St. Nicholas refrained from futile amusements, loved praying, was the best pupil, and read the Scriptures during his spare time.

Holy Hierarch is honoured as healer, as travelers’ patron, and as defender of offended, persecuted and destitiutes. He is asked for help in commerce and studies, for resolution of disputes and for making rulers wise.

When he arrived at manhood Patara inhabitants elected him the presbyter. Several years later St. Nicholas became the Bishop of Myra, the capital of Lycia.

During the years of pastoral ministry the holy Hierarch became famous for many wonders and deeds of mercy. He is honoured as healer, as travelers’ patron, and as defender of offended, persecuted and destitute. He is asked for help in commerce and studies, for resolution of disputes and for making rulers wise.

Here are some the most well-known material from Holy Hierarch Nicholas life. Once the Holy Bishop got to know of a father who decided to offer his daughters for sale since he suffered abject privations. Thrice at nights he went to the poor man shack and put stealthily sacks with gold. Each daughter got her dowry and married happily. In Western Europe this story developed into the legend of Father Christmas (St. Nichlaus, Santa Claus) who at Christmas Eve night throws gifts for nice and obedient children into chimneys.

When voyaging St. Nicholas more than once pacified gales, healed, and even resurrected the sailors and passengers mutilated by the raging elements. Therefore many travelers overtaken with calamity started praying to him already in his lifetime.

In 325 St. Nicholas participated the Ist Ecumenical Council at Nicea. The legend tells that being indignant at the heretic Arian who blasphemed against our Lord Jesus Christ, the Holy Hierarch the slapped the unrighteous in his face. St. Nicholas was defrocked therefor, and imprisoned. In prison Jesus Christ and the Holy Mother of God appeared before the saint and gave him the Gospel and the homofor – Episcopal dignity insignia.

The “Nicea miracle” became the evidence of St. Nicholas being chosen by God. He is up to date worshipped as the greatest wonder worker in the entire Christendom. Even the Moslemin Turks take good care of the tower and the dungeon where he has sat. Images of Christ and the Mother of God with Gospel and homofor in Their hands present on almost every icon of St. Nicholas.

When famine burst out in Lycia, the Holy Hierarch made another wonder. He came to the dream of a grain merchant who was going to sail with cargo, and ordered to take it to Lycia. The saint left for him three golden coins in advance. In the morning the merchant found the coins gripped in his hand. He took grain to Lycia, sold it advantageously, and saved starving people. Since then St. Nicholas had been also worshipped both as the defender of the needy, and the helper in commerce.

The God’s Pleaser is also revered as the protector of guiltlessly convicts, and as the deliverer from wrongful death. Once in absence of St. Nicholas the Governor of Myra condemned three citizens wrongfully to death. The Holy Hierarch returned to Myra right in the execution moment and had time to stop the executioner hand. Next time the Byzantine Emperor condemned three military commanders by a slander. The convicts started wrestling with God, invoking St. Nicholas for protection. The same night the God’s Pleaser came to the Emperor’s dream and demanded to free the prisoners, otherwise threatening to dethrone him. “Who are you to dare demanding and threatening? – The Emperor asked. “ I am Nicholas, the Archbishop of Myra in Lycia!” The Emperor ordered to review the case of the commanders, and being convinced of their guiltlessness, set them free.

The saint has always helped and keeps on helping all sufferers regardless of their religion, and aroused repentance, love and mercy in them. His wonders are being worked up to date.

St.Nicholas reached a great age and joined his Maker peacefully on December 19, 342. His imperishable relics were in 1087 removed to Bari, Italy.

St. Nicholas is commemorated on December 6 (19), the day of his eternal rest, and on May 9 (22), the day of relics transportation."