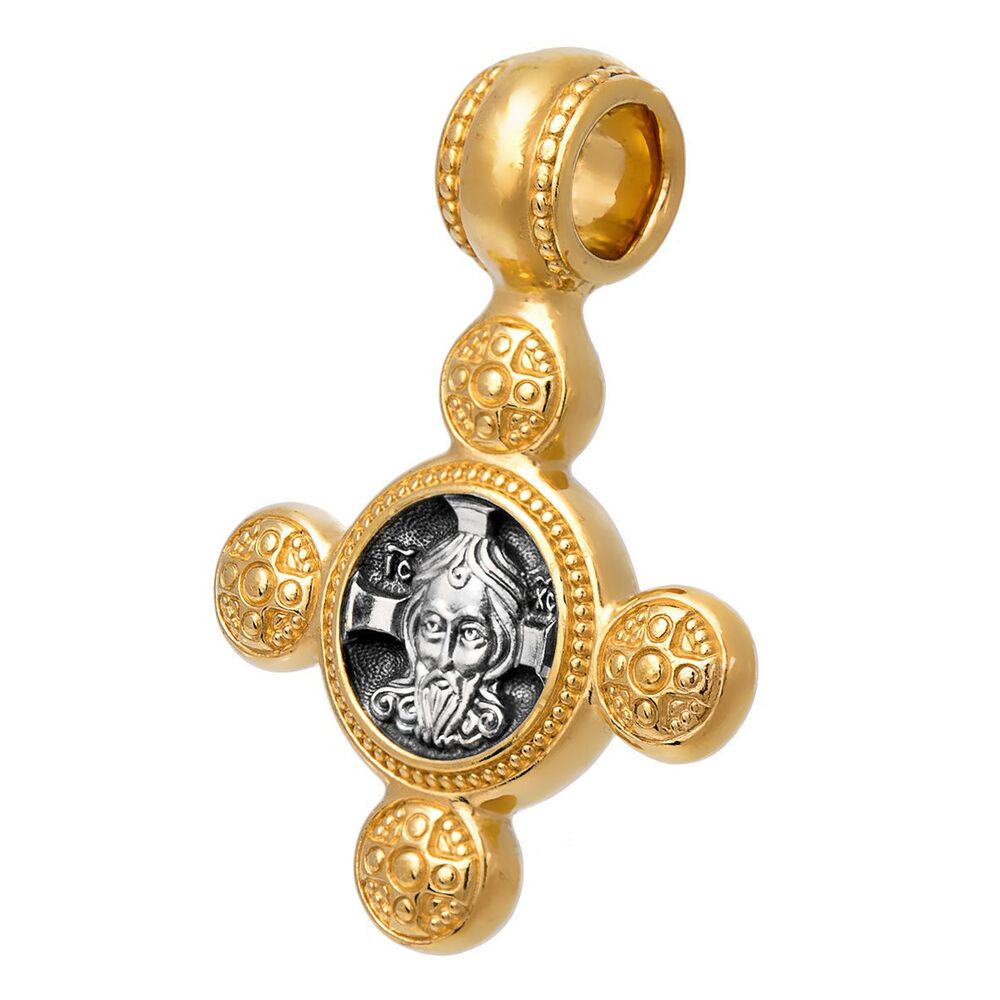 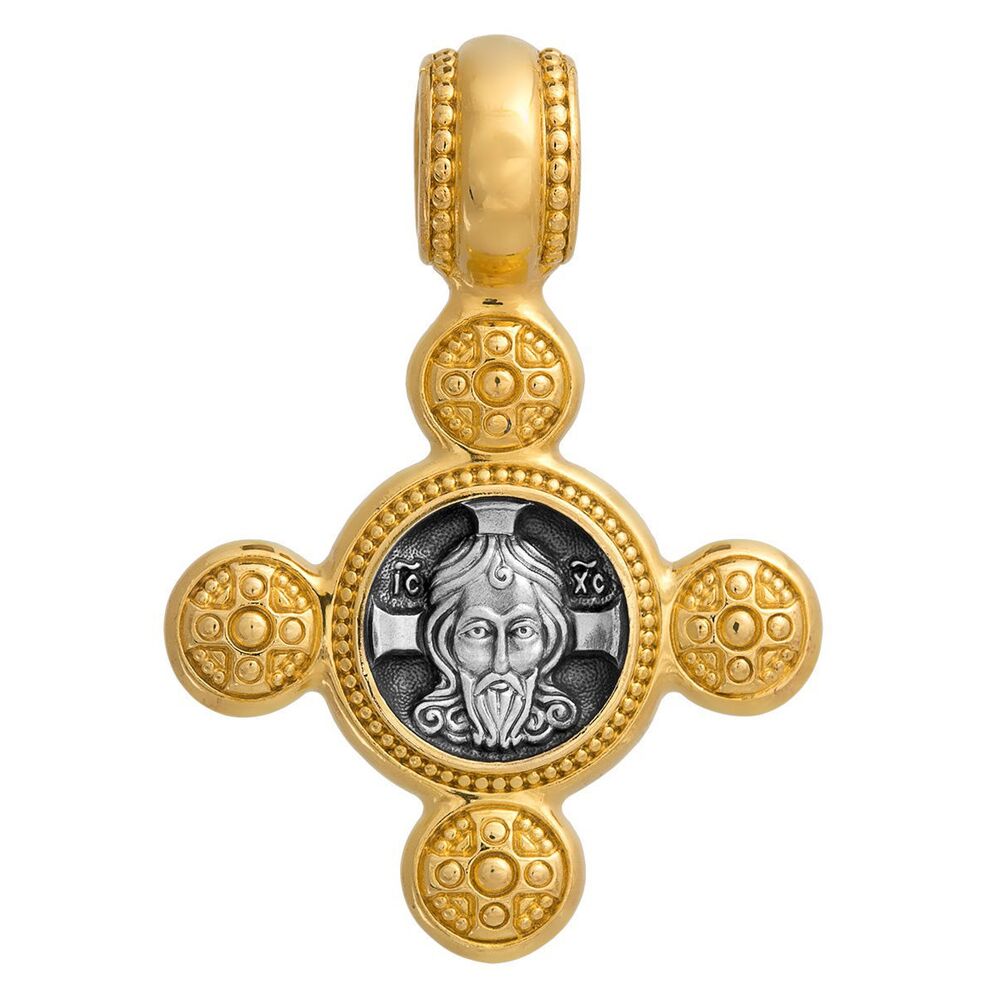 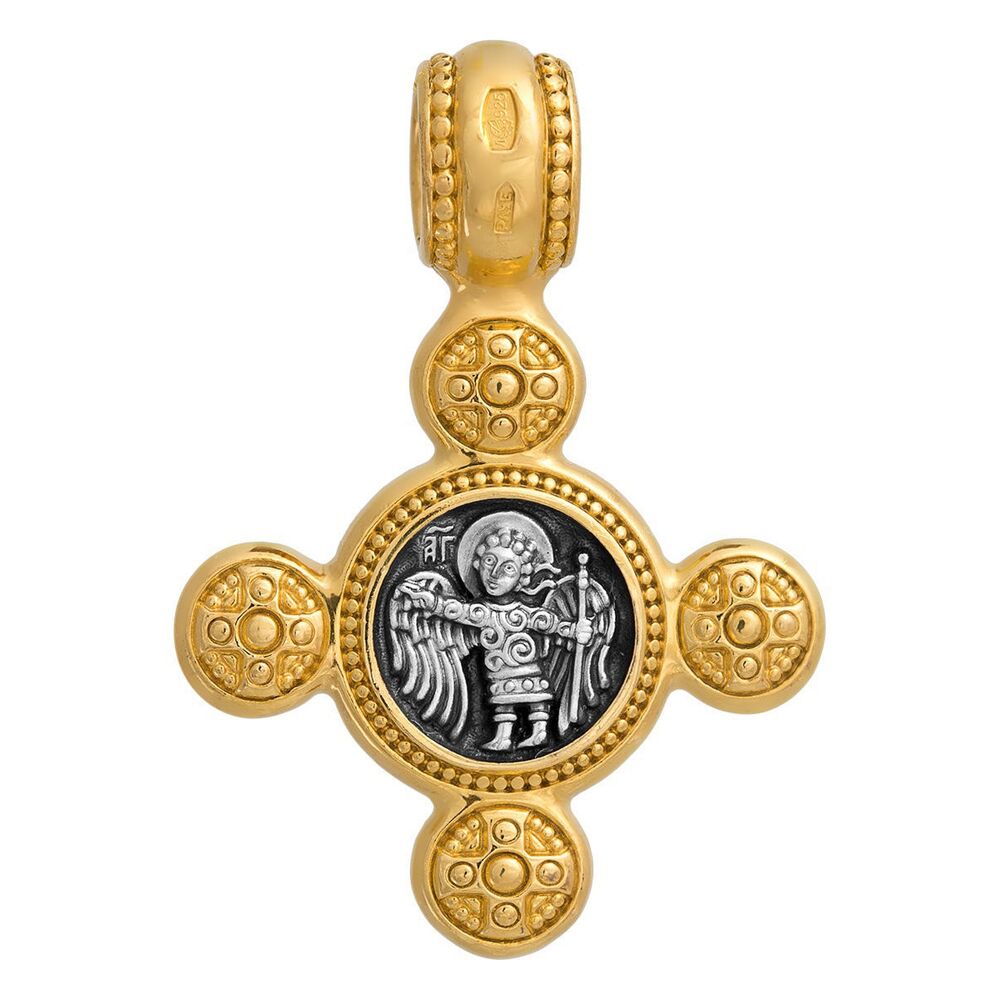 "Next-to-the-skin cross is a personal sacral sign of Sacrament of Baptism, wherewith one obtains the second, spiritual incarnation. Christian is adopted by God, is a member of His Church, and lives with a hope of salvation and futurity, for the Lord said: “Except a man be born of water and of the Spirit, he cannot enter into the kingdom of God” (John. 3, 5).

A small next to the skin cross having image of the Saviour Not-Made-by-Hands on the obverse and a Guardian Angel icon on the reverse is created in Orthodoxy traditions, using ancient Christian symbolism.

In artistic appointments of churches one can often see a cross arranged of circles. It symbolizes the Divine completeness a harmony of the Universe. Circle is a sign of eternity, heaven and God Who Himself, according to Clement of Alexandria, is “endless circle whereto all the forces converge”. By definition of holy fathers the equilateral cross is the image of Christ and the sign of His victory. Each cross symbolizes the world to stretch out to four parts and to extend both in breadth and upwards. The basic transverse cross bar that spreads in breadth signifies the earthy, the vertical one marking the nether and heaven worlds as well as the earth aspiration for Heavens. “Just as the cross four edges are being held and united by its centre, so by the power of God held are the height and the depth, the longitude and the latitude, that is, all visible and invisible creation”, St. John Damascene (8th century) wrote. The cross combined with a circle creates the image of the Universe unifying in God and eternity communion: of heaven and all ends of the world. In the given cross this symbolism is supplemented with the image of the Saviour Not-Made-by-Hands. Circle with inscribed straight cross is as well the ancient sign of Christ. At pre-Christian Russia Sun was depicted in such a way. Russia having got baptized, the well known shape imbued with new meaning. After all, in Christendom the Lord is glorified as Light of Truth and the Sun of the Righteousness that enlightens all around with His rays. Here in every circle granules are located in twelve around the cross, larger four being by the center. In this symbolical way depicted are twelve Apostles and four Evangelists.

The cross allowing the person to draw nearer to God guards him against invisible enemies. Image of the Saviour Not-Made-by-Hands is one of the most redoubtable for dark forces.

The Saviour Not-Made-by-Hands Image, or the Holy Towel, has always been the greatest sacred thing in the Christendom. By Legend the Lord’s face miraculously imprinted on a towel after ablution. In 944 the Holy Towel was taken to Constantinople and kept in a special shrine in cathedral of Pharos. Unfortunately, it vanished in 1204 when Constantinople was plundered by crusaders.

In Russia copies of this icon have been known since 11th century. The images were located over fortress and cathedral entrances, cast in bronze as guard-images and as an apex for next to the skin crosses. Warriors wore it on their armor, helmets and battle banners.

Since 17th century a personal defender – Guardian Angel – has been as well portrayed on Russian icons and next-to-skin crosses.

Angels are created beings, though more powerful than people. That is why they are depicted in different ways: now as a splendid warrior, and now as almost immaterial essence (e.g. on icons of the Crucifixion) and sometimes in quite childish way (particularly in stone carving and in small artworks). In this cross used is an image in former times created by old craftsmen of the city of Yurjev-Polskoi.

Guardian Angel is God given to every person, to care of his (her) soul saving. Angel sheds tears when his ward commits a sin, and rejoices at his purification through repentance. In the course of one’s life Guardian Angel defends the person against malicious spirits, after his death becoming the guide in the other world. Guardian Angel image is put on the next to skin cross for the person to remember of, to love and to pray to him all the time.

Next-to-skin cross is not only a person strong protection, but a sign of his being loyal to a vow given to God when getting baptized: to avoid all kinds of evil, and to live by Christ’s law of love to one’s neighbor and devotion to God. “If any man will come after me, let him deny himself, and take up his cross, and follow me” (Matt. 16, 24), the Lord says."