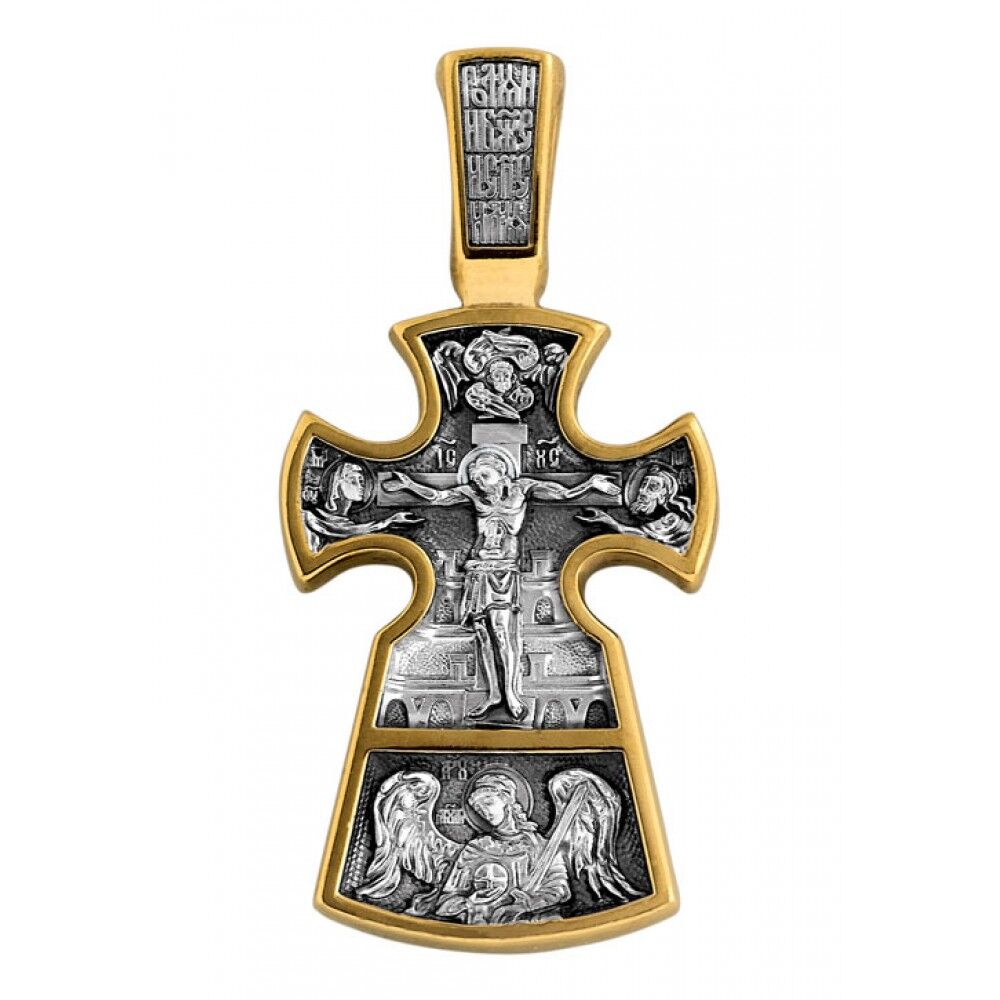 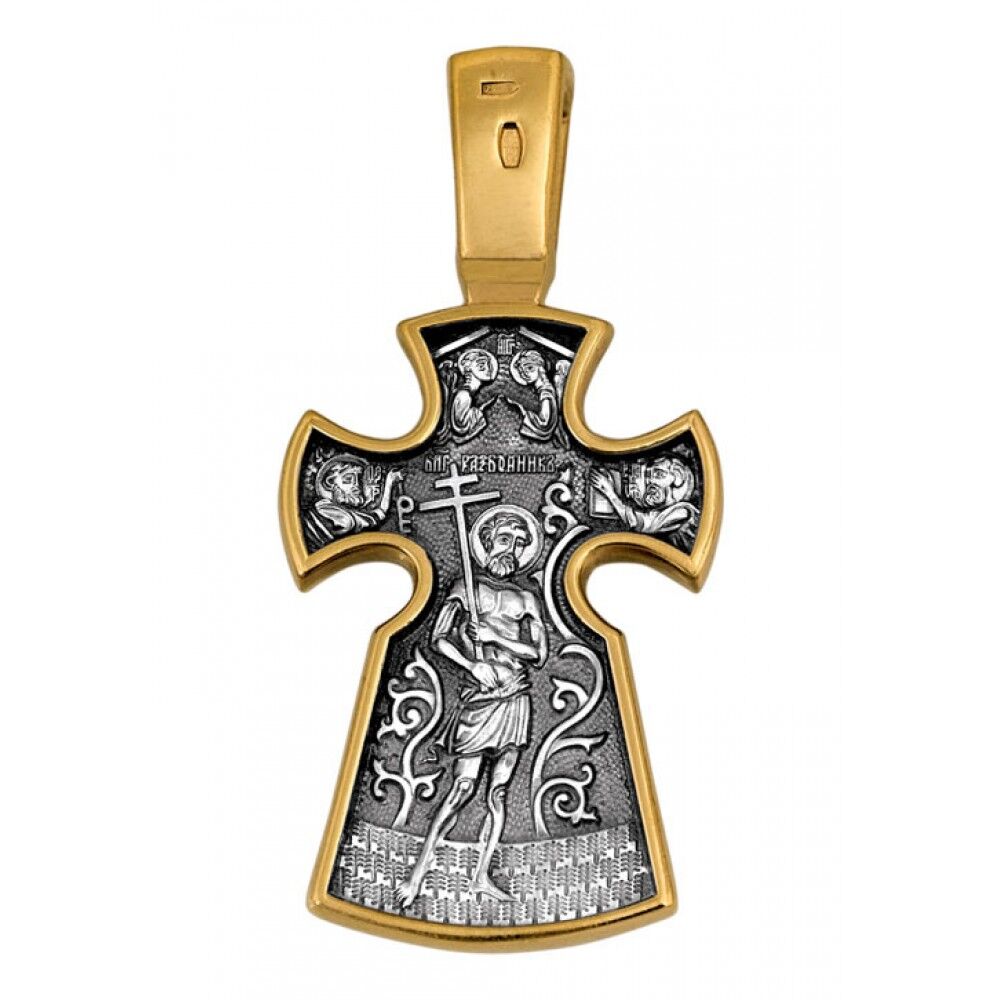 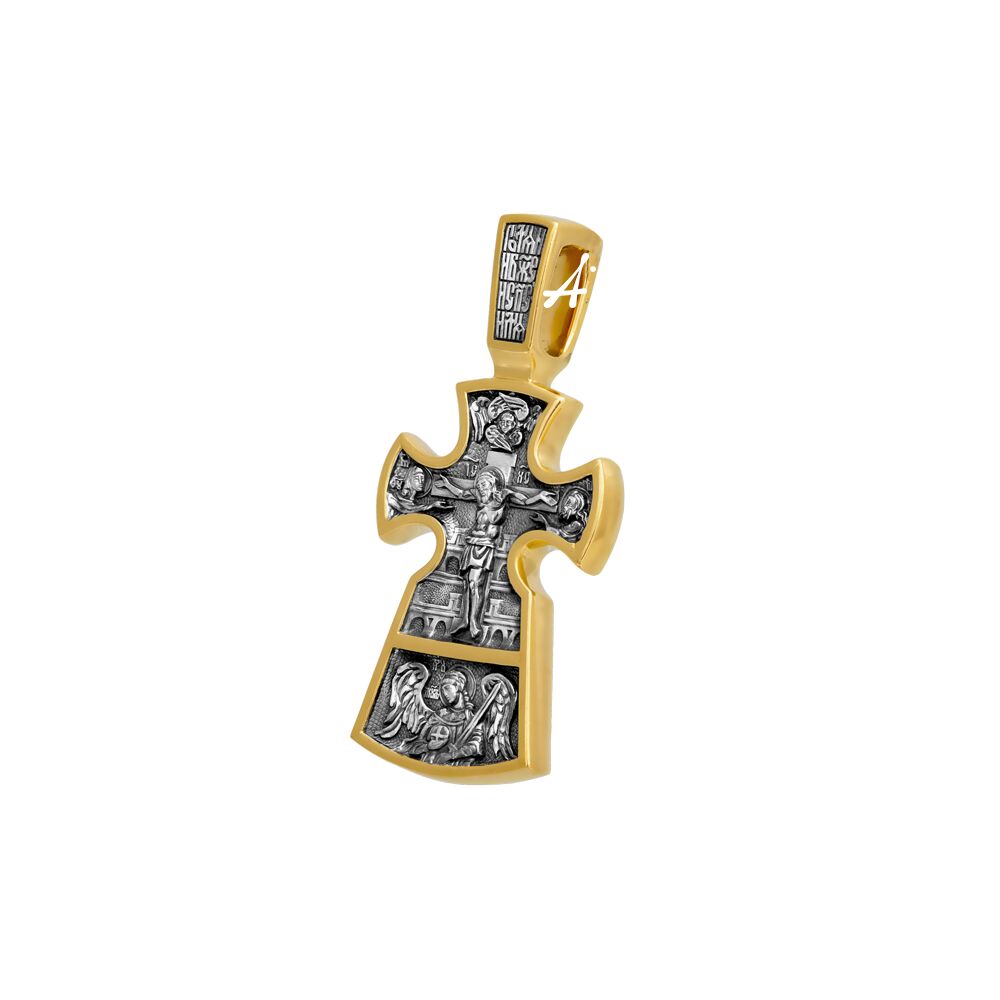 "A large next-to-skin cross of a traditional strict shape discloses Orthodox salvationism. The conception of “salvation” has two aspects: divine and human ones. Everything done by God for our salvation – the divine aspect – is a gift, since we could not have done that by ourselves.  Human aspect means the efforts that we are to make for availing ourselves of the gift. Therefore the cross obverse is devoted to divine things, the reverse being occupied by the human ones.

As a result of the Fall the mankind had to be paying the penalties in the form of death during many centuries. Death was an insurmountable barrier that segregated God and the mankind. Human beings were unable to destroy it by themselves. Being sinless our Lord Jesus Christ of His own accord made a redeeming sacrifice of Himself, and took death on cross for exempting people from death. Christ descended into Hell together with His angels. Archangel Michael, the captain of the heavenly host bound Satan hand and foot putting an end to his complete domination over the world. The image of powerful Archangel is put at the foot of the Crucifix.

But the mankind salvation is impossible if people themselves do not participate it, do not have spiritual struggle against sin. Salvation presupposes that a person should change his (her) life. But such changes will be unfeasible if they are a forced choice; the choice should be free. Righteousness is of no moral value for God if it is not deliberate and not free.

Therefore aspiring to righteousness to the best of our ability, desire for overcoming man's sinful nature are our main tasks. The Most Holy Mother of God and John the Forerunner are helpers, preceptors, and advocates of people before God.  They are pictured in a pose of prayerful intercession before crucified Christ.

It is impossible for an ordinary person to spend the life without sin. As we know from Gospel even the Apostle Peter thrice repudiated Christ. Consequences of sinful deviations are improvable by repentance. The Lord is always ready to forgive a sinner sincerely repentant for his (her) sins. We see the examples in Gospel. These are the stories about the Penitent Robber, and the Apostles Peter and Paul.

Gospel tells about two robbers crucified together with Christ (Lk. 23:39-43). One of them blasphemed the Lord in his exasperation. The other despite of his fellow admitted that “we indeed justly: for we receive the due reward of our deeds”.  And he said to Jesus: “Lord, remember me when thou shalt come into thy kingdom!”  In other words: “Lord, remember me when you will reign”. He does not ask for glory or bliss, but invokes for the least. The words of the penitent robber became the example of real deep repentance that are worthy of the highest reward. And the Lord said to him: “Amen I say to thee: This day thou shalt be with me in paradise”.

On the upper part of the cross we see the New Jerusalem door opened by angels for penitent sinners. On the ear written is a shorter prayer of the Robber that became a part of liturgy: «O Lord commemorate and save me».

Sts. Peter and Paul, prime Apostles are portrayed on either side of the robber. Peter was a common fisherman named Simon before being called. A new name meaning “stone” he got due to his deep faith. But even such select person, whom the Lord entrusted key to Paradise, repudiated Him thrice. However he repented and confirmed his repentance by his further life and death.

Another great Apostle had a birth name Saul, and was a cruel persecutor of Christians. The Lord appeared before him oh his way to Damascus, and blinded him. After getting baptized he recovered his sight and God christened Paul. That miracle overturned everything in Paul’s soul. He started preaching Christ's Resurrection with even greater religious fervor. The whole Church, the entire Christendom were filled with the Apostle’s preaching. He is survived by multitude of disciples. The Church theology is to a large extent based on Epistles of the Apostle Paul that are extant in the Holy Scripture."