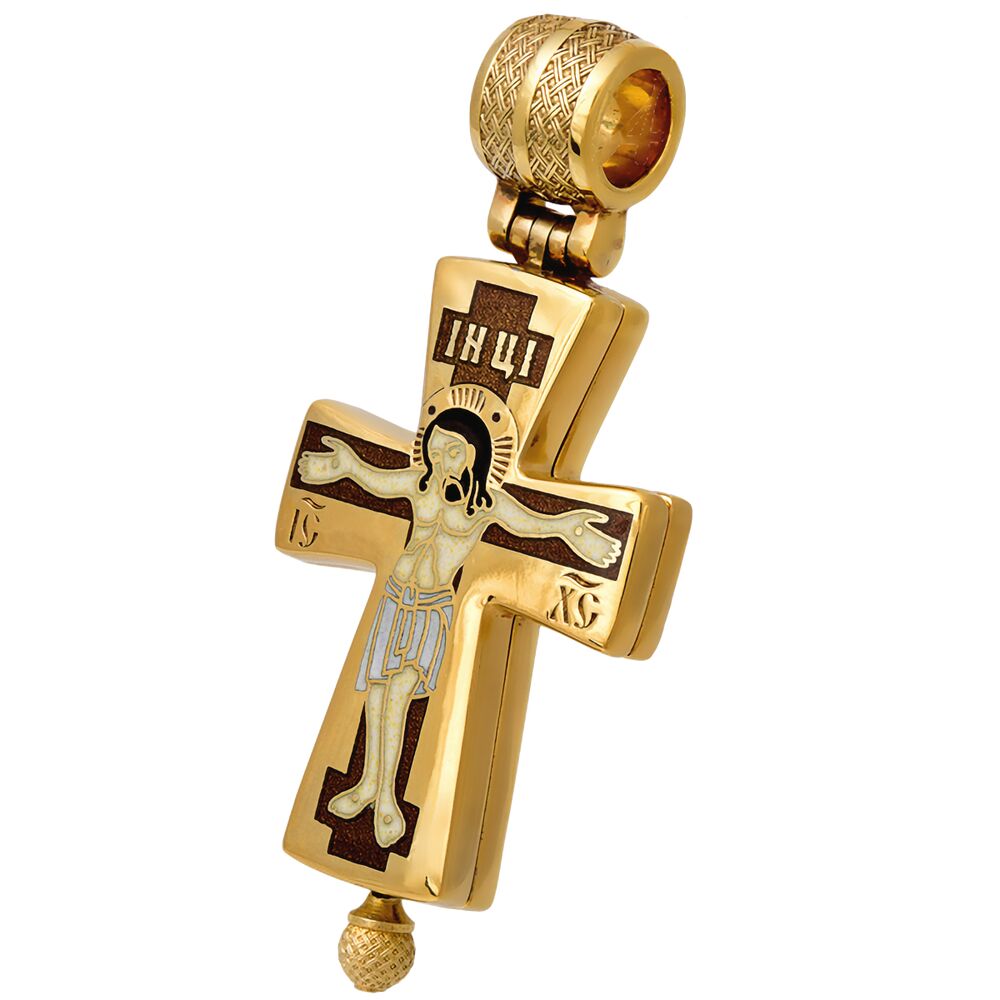 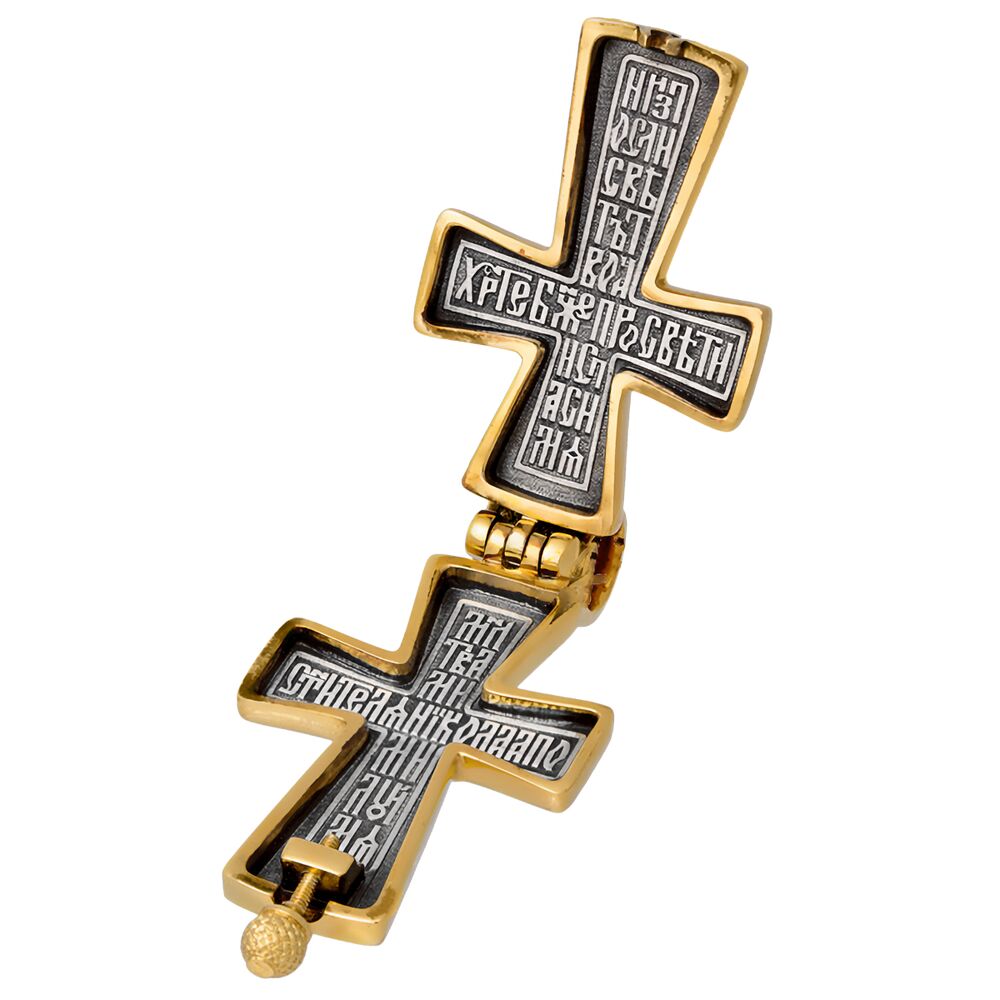 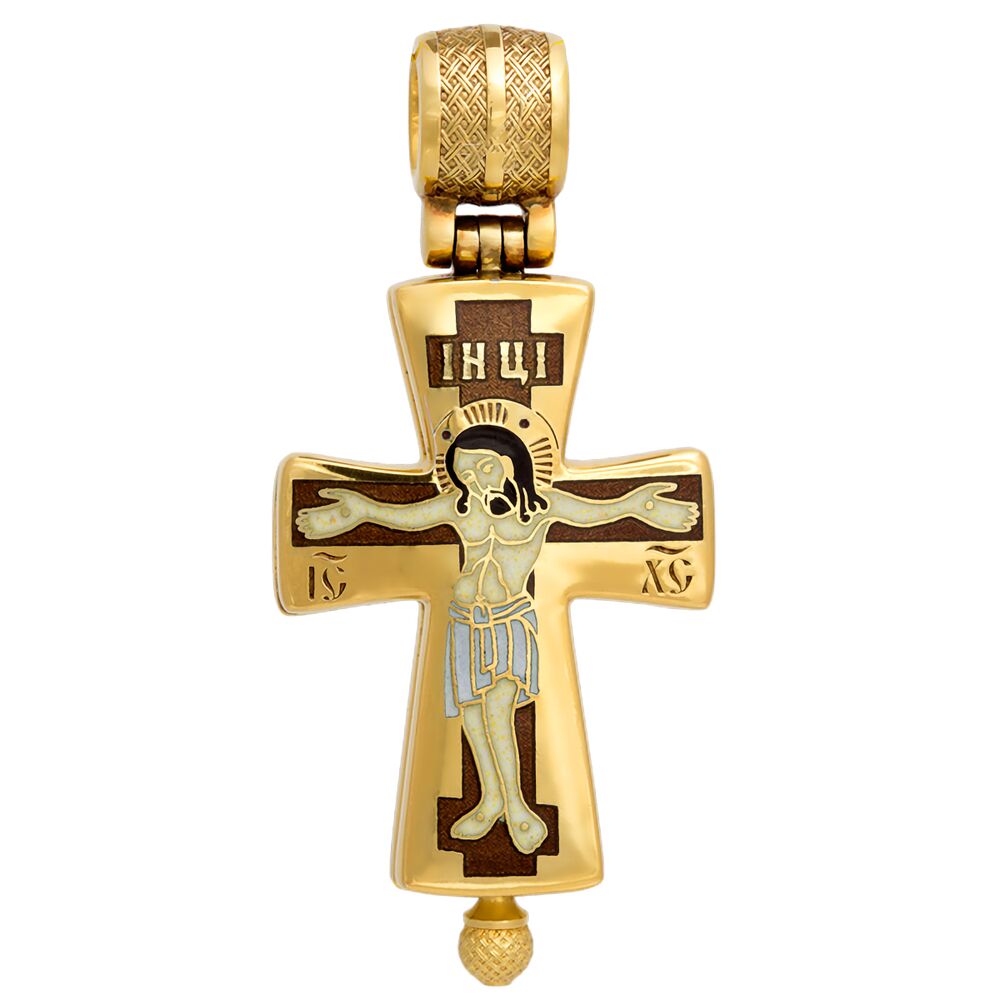 "Shrine cross with images of the Crucifixion and St, Nicholas, the Wonderworker is made in extremely symbolical old traditions. Images of the saints created with plique-a-jour technique as if come out from the Kingdom of Divine Glory shining with gold into the earthly world that stretches out to four parts of the world in a crosslike way.

Shrine cross, or encolpion (in Greek) came to Russia from Byzantium and were designed for keeping parts of relics and other sacred things. The most wide-spread were cross-shaped and icons decorated as they combined the power of several sacramental things to be worn on ones breast. Shrine cross protected the person and at the same time sanctified and healed him by miraculous Divine power provided jointly by the cross, icons and relics.

Variously shaped crosses are revered in the Orthodox Church, each turning us to the true Cross of the Lord. Four ends of the cross indicate interrelation of the every living thing and Heavenly Divine world. St. John Damascene, Doctor of the Church and great ascetic has written (7th century): “As four ends of the cross are held and joined by its centre, so by the Divine strength hold are height and depth, length and width, i.e. visible and invisible creatures”.

Here the eight-ended cross whereon the Crucified Lord is always portrayed supplements the four-ended symbolism. The cross upper part symbolizing the sphere of Divine being is as if separated by a short upper bar, where “the King of Glory” is written. This bar represents the nameplate “JNRJ (Jesus Nazarene Rex Judaic)” that was nailed to the cross after the Crucifixion according to Gospel. Under Christ’s feet in the earthly part of the cross there is an inclined bar symbolizing the yardstick of human deeds, the scales where good and evil works will be put at the Doomsday. One of the thieves crucified together with Christ blasphemed against God, and the scales sank as if bring him down to hell. The other repented and invoked to God’s mercy. For him those scales indicated the Kingdom of Heaven.

The reverse of the cross is wholly occupies with the icon of St. Nicholas of Zaraisk. The icon was taken to Russia from Korsun (present Chersonese) in1224 by the order of St. Nicholas the Wonderworker himself.

The Holy Hierarch Nicholas (second half of 3d century) is the greatest and the most worshipped saint in Russia. He has been the Bishop of Myra in Lycia, Roman Province. He has become famous for great wonders and acts of charity that he keeps on making after death as well. St. Nicholas is prayed for intercession by persons in need, in distress, innocently convicted and so on. He helps students, travelers, sailors and tradespeople; he heals sick persons, conciliates animosity, finds those who are missing and even resurrects the dead. But he helps only those who repents sincerely and trusts in God.

The Holy Hierarch Nicholas has taken care of the spiritual upbringing of his flock all his life, and after death remains a spiritual enlightener and guide – strict, wise and merciful – for everyone who offers a prayer to him (commemorated is on May 22 and December 19).

On the inner side of the cross there is written a prayer for Christ: “Send down Your light, O Lord Jesus Christ our God, enlighten and same me”. The prayer is continued with confidence in the intercession of St. Nicholas the Wonderworker: “Have mercy on me through the prayers of the Holy Hierarch Nicholas” ."