Home/Categories/Encolpions Triptych/Encolpion Triptych Akimov 107.037 «The Lord Pantocrftor». The Mother of God Orant»
7 of 8
Write a review
107.037
Save
5% 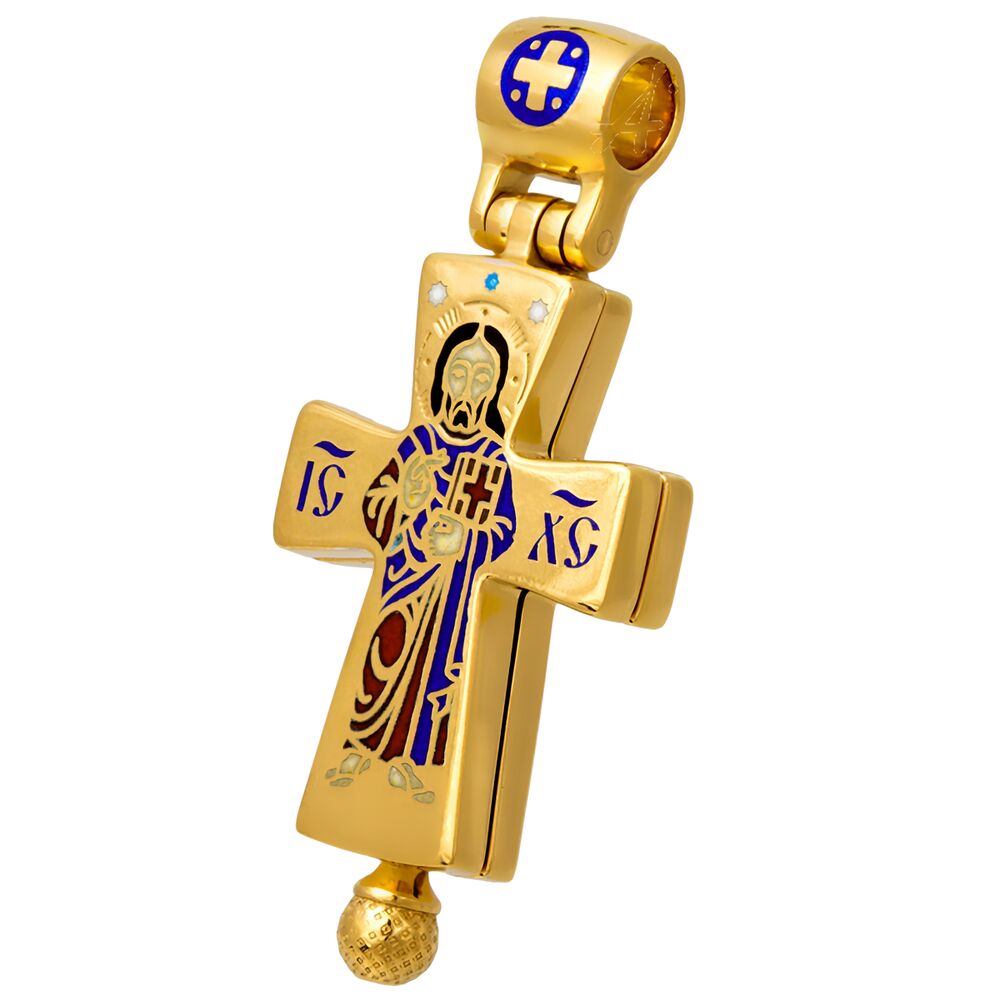 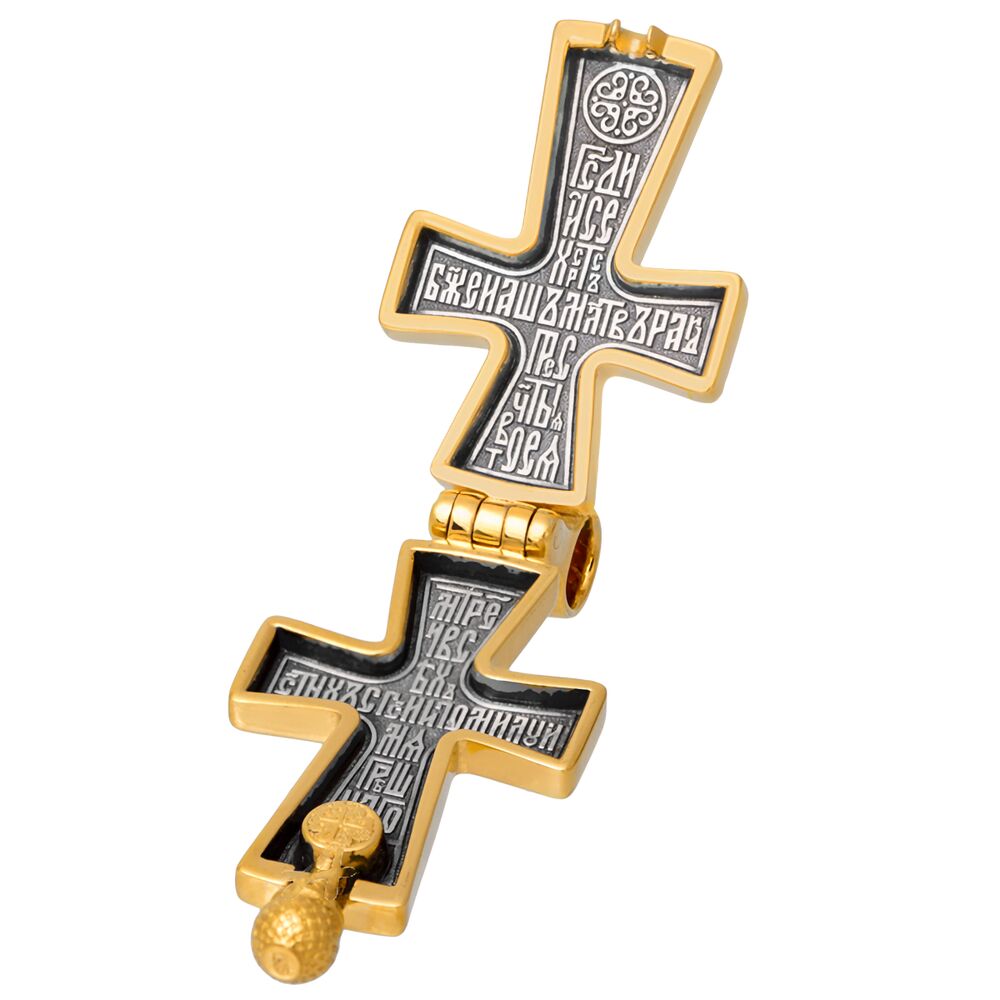 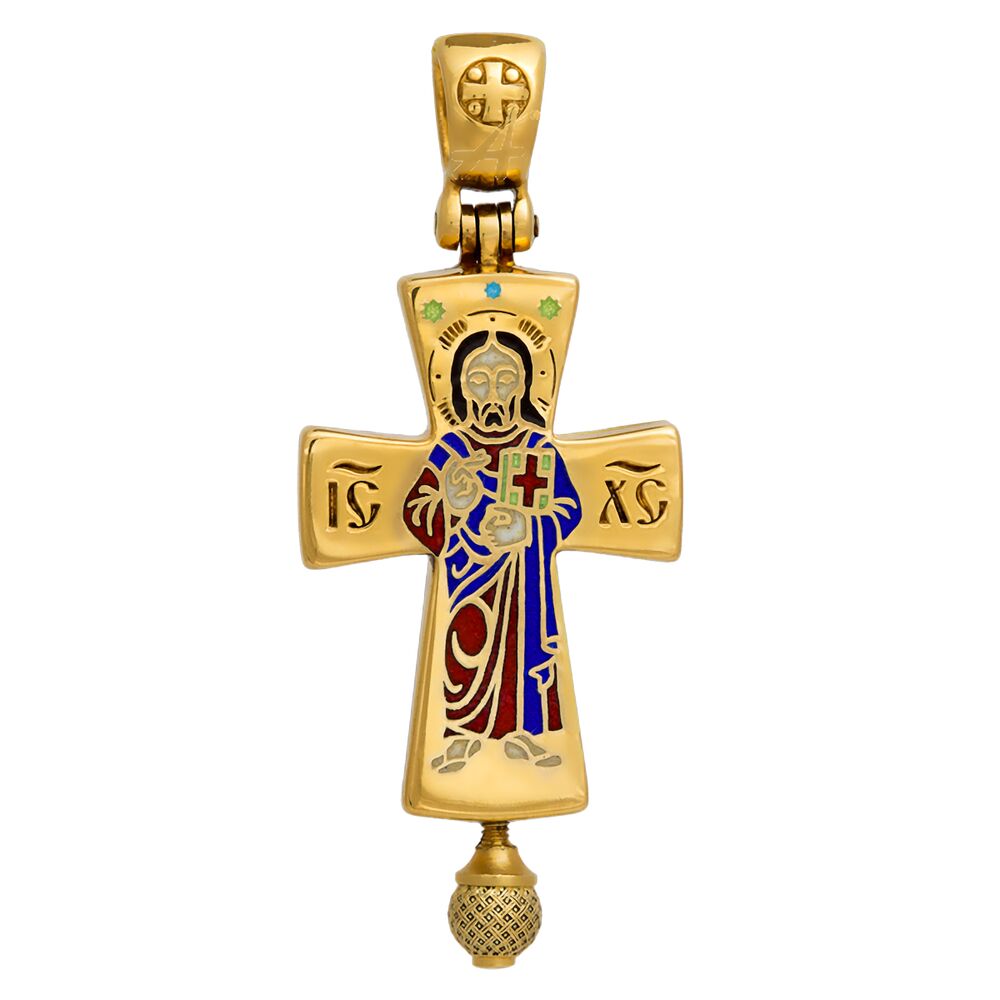 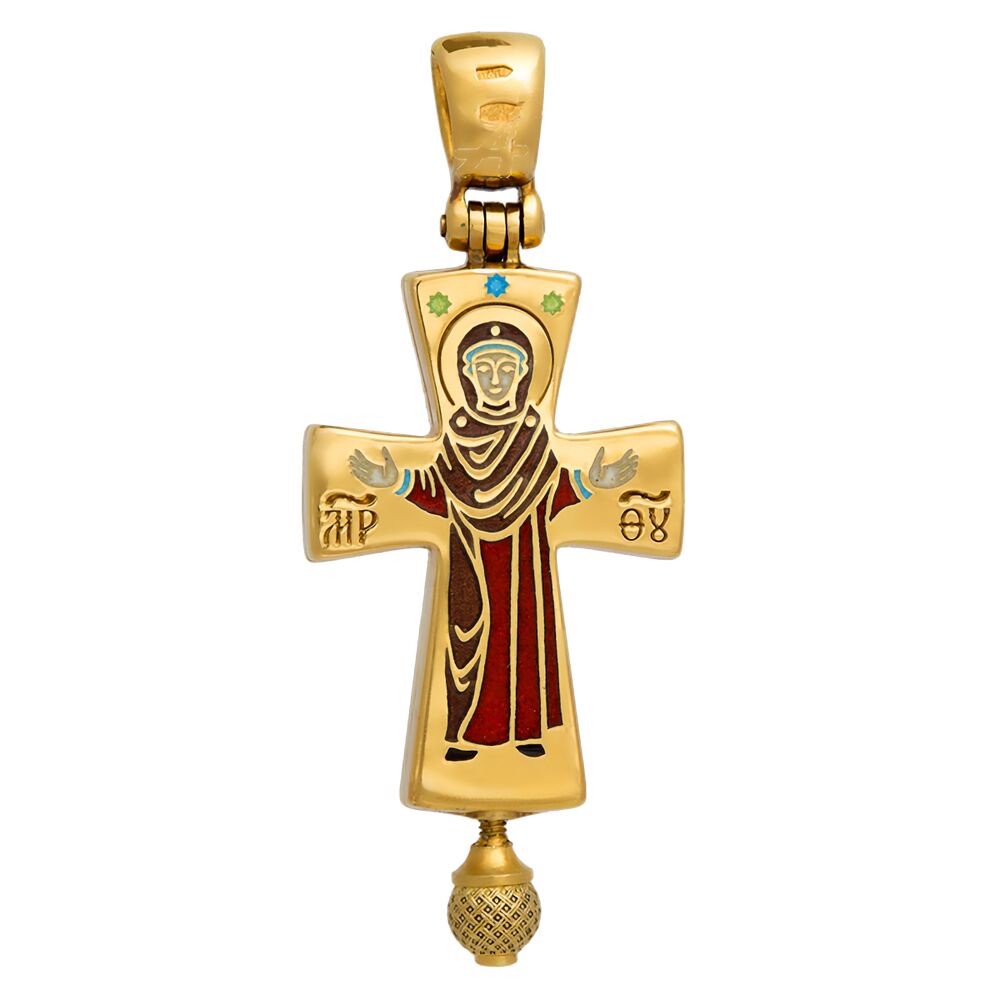 "The classical shape and design of the shrine cross (encolpion) with the image of the Lord Almighty on the obverse, and the icon of the Virgin Mary Orant turn us to Ancient Byzantium. Both the technique and the iconographic decision are Byzantine.

The image of the Lord Almighty is the most ancient among the icons of Jesus Christ. The Lord is pictured full-length with His right hand in the act of benediction; in His left hand He is holding a book with a cross on its cover. The book symbolism is of multiple senses, but the two are principal: it is the Book of Life, i.e. the image of the entire God-created world; and law (commandment) book for the world to live thereby.

Theo philanthropy is the basic Lord’s commandment. “That you love one another, as I have loved you, that you also love one another” – Christ has said to His disciples. And the extent of His Divine love revealed after the crucifixion, after His redeeming sacrifice.

An icon is considered unworthy of worshipping if it is not inscribed. Letters on the icon are symbols of mystical presence of God in it. Therefore the initials of Christ and of the Mother of God are written there on the cross beside Them. Above the initials there are short titles indicating the sacral sense thereof.

The image of the Virgin Mary Orant on the cross reverse is the eldest among known ones. A female figure with hands lifted up has symbolized a pose of prayerful intercession since pre-Christian times. But in Christianity the Orant (supplication) gesture was imbued with new meaning because a person with his arms stretched is likened to the Crucified.                           That is why Orant has become a symbol of not an individual prayer, but of supplication for the world. It is an image of a devotional feat where through the mercy on and absolution of the whole mankind are solicited for.

The Most Holy Mother of God is revered as the main Woman of Prayer of God for people. It is She – “the Kindly Mediatrix” and “Good Consoler” – to Whom we appeal in our troubles. And it is She Who will be our intercessor on Doomsday.  Therefore inside the encolpion there is written: “Lord Jesus Christ, Son of God, have mercy on me the sinner through the prayers of Your Pure Mother and all the saints!”

The images of Christ and of Most Holy Mother of God are made in Champlevé (French, from champ ‘field’ + levé ‘raised’) technique. That is an enamelwork in which hollows made in a metal surface are filled with pigmented triturated glass. Then the glass is melt and sintered in a special furnace. The processing complexity is that differently pigmented glass has a different melting temperature. Therefore each pigment is melted separately. The enamellist should at that watch over the ready pigments not being burnt during replicated baking.

The first enameled jewelry is extant since the epoch of Ancient Egypt, Assyria and Babylon. At those times complex faceting of gems has been unknown, and gems have been simply polished. Pigmented glass set in gold has been of uncanny likeness to precious stones, and has been widely used substitutionally. It is Byzantine jewelers who have discovered real artistic features of enamel. Using gold wire bridges and glass paste they have created the most involved anecdotes. Nowadays in the Saint Mark's Cathedral in Venice one can see the iconostasis of gold and enamel that was removed from Byzantium by crusaders

The art of enameling came to Russia from Byzantium together with Orthodoxy. Russian masters were of high opinion of the enameled goods expressiveness, as well as of their durability; and created enduring masterpieces of their own. Those masterpieces appeared to be even more durable than metal cast. For example yoke-necklets by Russian masters of 12th century remain bright, beauty and magnificence as if they were made yesterday.

This encolpion is made by modern jewelers in compliance with all minutest details of ancient art of enameling."