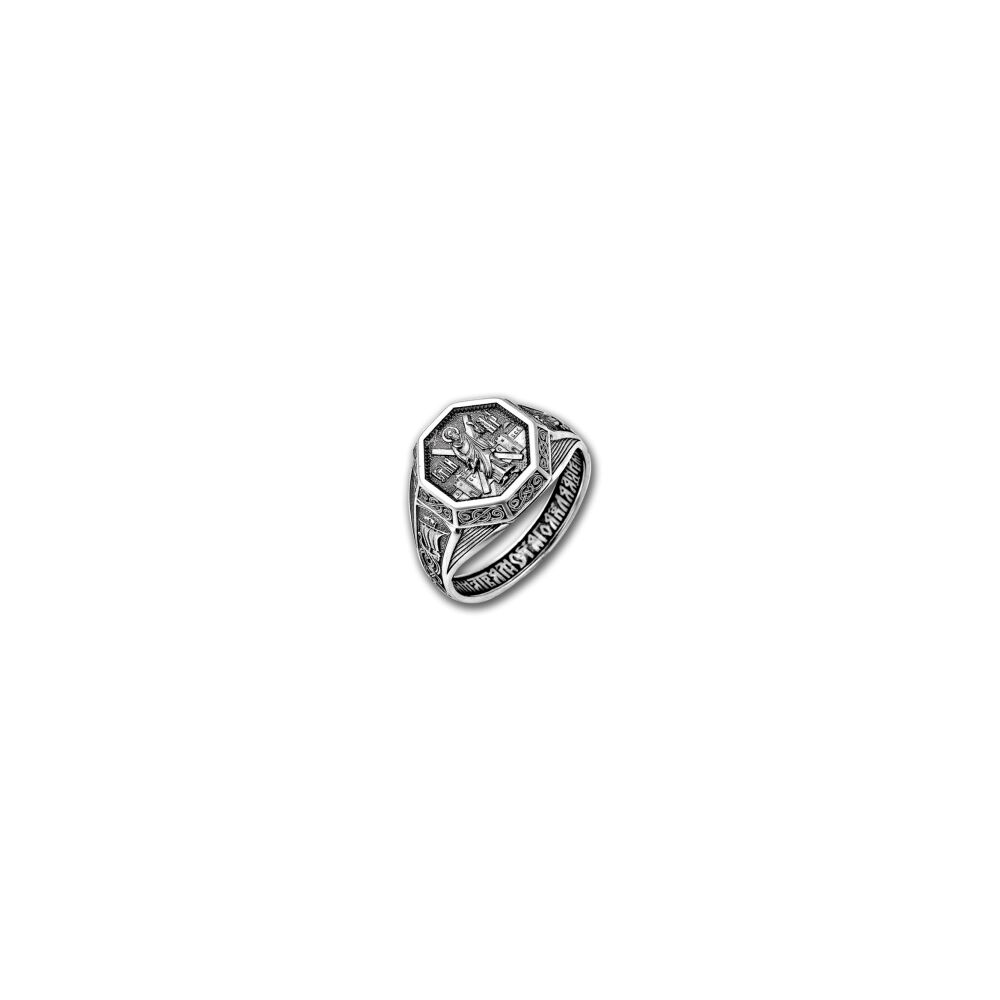 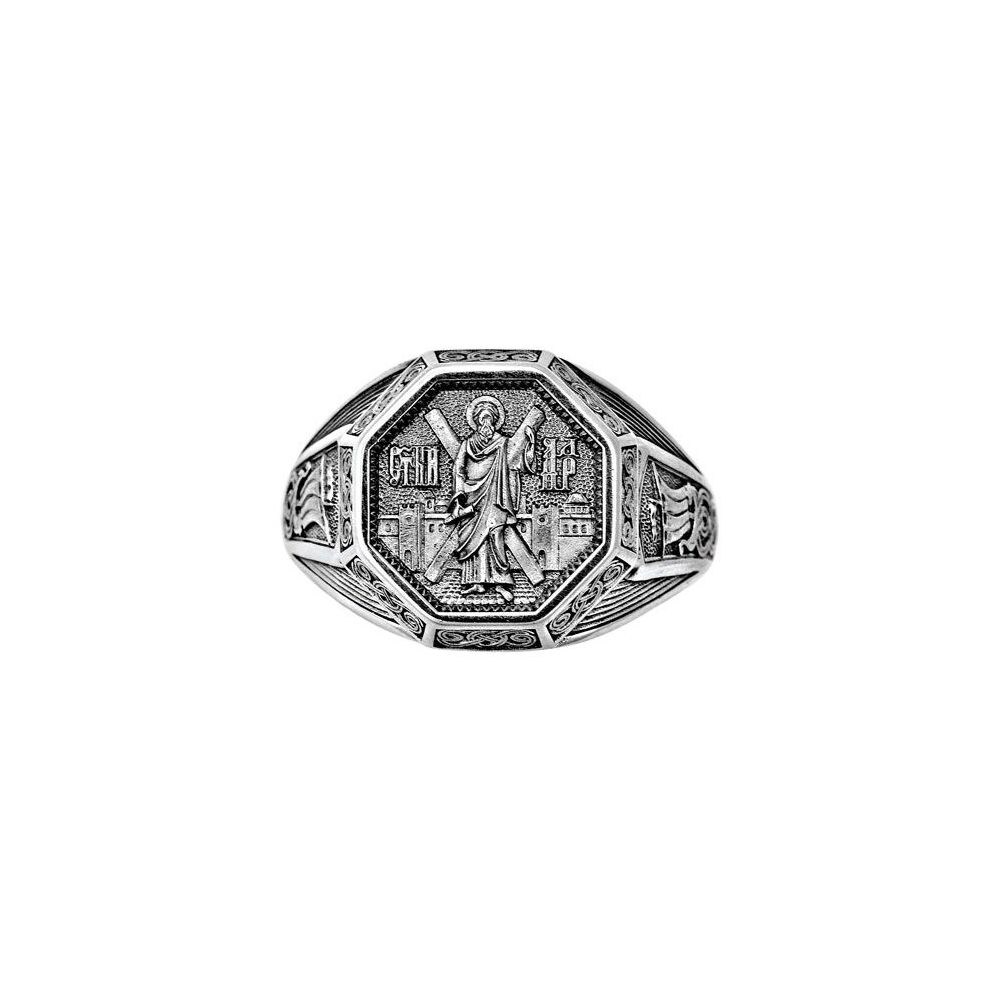 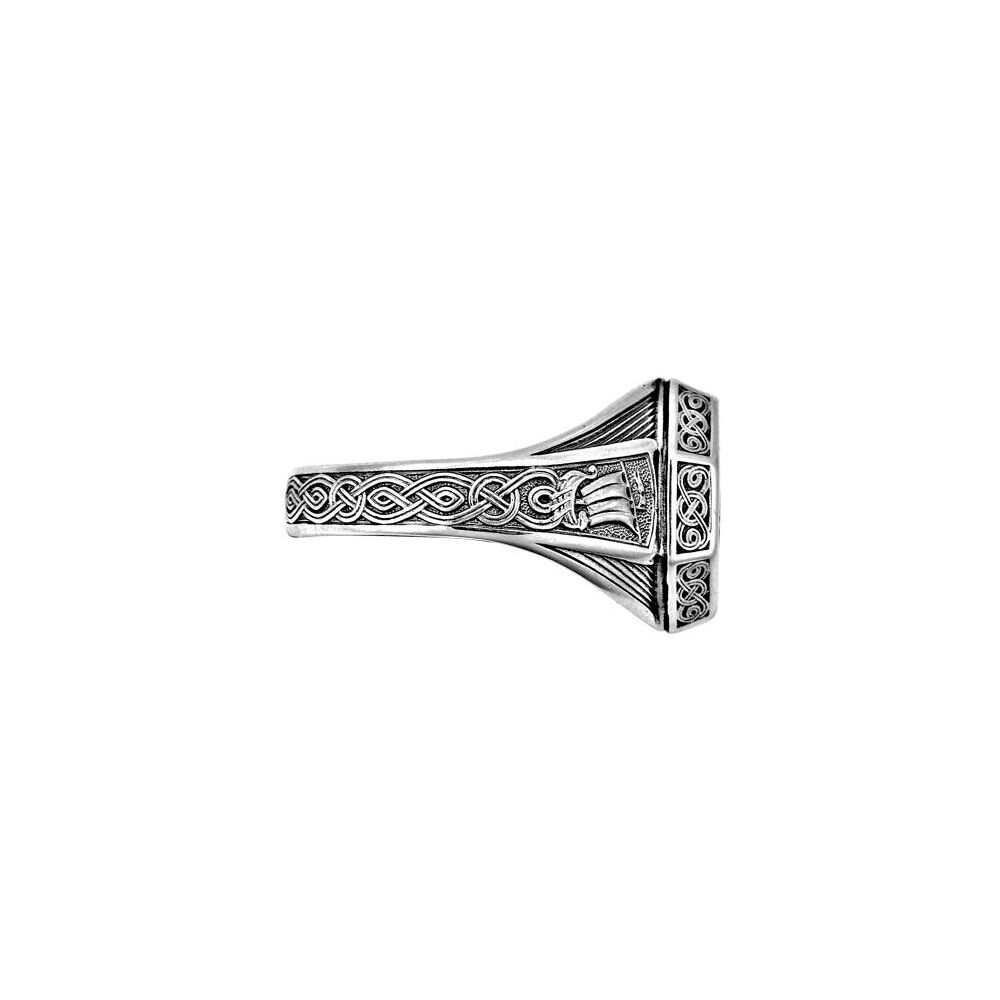 "Guard ring with the icon of St. Andrew сcontinues the traditions of Russian guard signet-rings that were applied for personal protection against dark malicious essences and for sealing the most valuable things and papers.

St. Andrew, the Apostle was born in Galilean town Bethsaide in the north of the Holy Land. “Andrew” is a Greek name and means “man, masculine”.

When John the Baptist started to preach at Jordan banks Andrew followed him together with John, the son of Zebedee. At that time Our Lord Jesus Christ came to John the Baptist to the Jordan for being baptized, and John said pointing to the Lord: “Behold, the Lamb of God, which takes away the sin of the world”. Hearing him say that, Andrew and John followed Jesus, That very day Andrew, the Apostle went to his brother Simon Peter and told him: “We found Messiah”. This way Peter joined the Disciples of Christ.

However, it took a while for the Apostles to devote their lives to apostolic service. From the Gospel we know that brothers Andrew and Simon Peter as well as brothers John and James had for some time to return to families and go in for their common work – fishery. Several months later the Lord passing by Sea of Galilee shore saw them and said: “Come you after me, and I will make you to become fishers of men”. Only then they left boats and nets and since then had become ever present Disciples of Christ.

Andrew who followed the Lord before the rest Apostles was surnamed “the First-called” (Protókletos). He remained with Christ all His earthly life. After the Saviour Resurrection Andrew, the Apostle together with the other disciples was honoured with meetings with Him and was present at the mount Olivet when the Lord ascended into heaven after giving His blessing to them.

After the Descent of the Holy Spirit the Apostles cast lots to what country each should go for evangelizing. St. Andrew received countries along the Black Sea shore, Northern part of Balkans, and Scythia, i.e. the land where later Russia appeared. According to legend Apostle Andrew preached in Crimea, then proceeded northwardly up the river Dnieper and got as far as the place where Kiev subsequently arose. “Believe me, - the Apostle told to his followers, - that the grace of God will shine over these hills: a great city will arise here, the Lord will enlighten this land by His Holy Christening and rear multiple of churches here”. The Apostle blessed the Kiev Hills and erected a cross on one of them. Then he went further up Dnieper and reached the Slavs` settlements, where Novgorod had already been. From here through the Varangian lands he passed to Rome and returned to Thrace where founded Christian Church in a small settlement named Byzantium, future mighty Constantinople. By the name of Andrew, the Apostle the Constantinople Church is tied with it daughter – the Russian Orthodox Church.

At the return to Greece Andrew, the Apostle stopped at Patras (Patrae) located near the Gulf of Corinth (Lepanto). Here by laying on the hands he healed many people, including noble Maximilla who put her faith in Christ whole-heartedly and became the Apostle’s follower. As soon as many of Patrae people placed their faith in Christ, Proconsul Aegeates was smitten with hatred for Andrew, the Apostle and sentenced him to crucifixion. The Apostle not in the least feared with the sentence, in an inspirational sermon disclosed to the audience the spiritual power and meaning of Christ's passion.\

Proconsul Aegeates did not believe to the Apostle words and called his doctrine phrenetic. Then he ordered not to nail, but to tie the Apostle to an X-shaped cross so that he would live longer and suffer more. Besides the body of the Apostle was tied upside down so that he saw neither the earth nor his executioners, but only the sky which he glorified as the heaven in which he would meet his Lord. Aegeates`s unfair sentence Егеата aroused indignation among people but still remained in force.

Hanging on the cross Andrew, the Apostle kept to pray. Before the soul and body separated a heavenly light suddenly illumined him, and in its shining Andrew passed away to the eternal kingdom of God. The death of a martyr of Andrew, “the First-called” Apostle took place about 62 A.D.

The Orthodoxy came to Russia from the Byzantine Empire, the bishops of which succeeded to Andrew, the Apostle. That is why the Russian Church considers itself his successor as well, and the memory of St. Andrew, “the First-called” Apostle in pre-revolutionary Russia was worshipped in so stately manner. In the honor of Andrew, “the First-called” Apostle the Emperor Peter I instituted the first and the highest order, and only state high officials were decorated with it. Since Peter’s time the Russian marine banner has been St. Andrew's flag: blue X-shaped cross on the white background. Under its protection the Russians won many glorious victories.