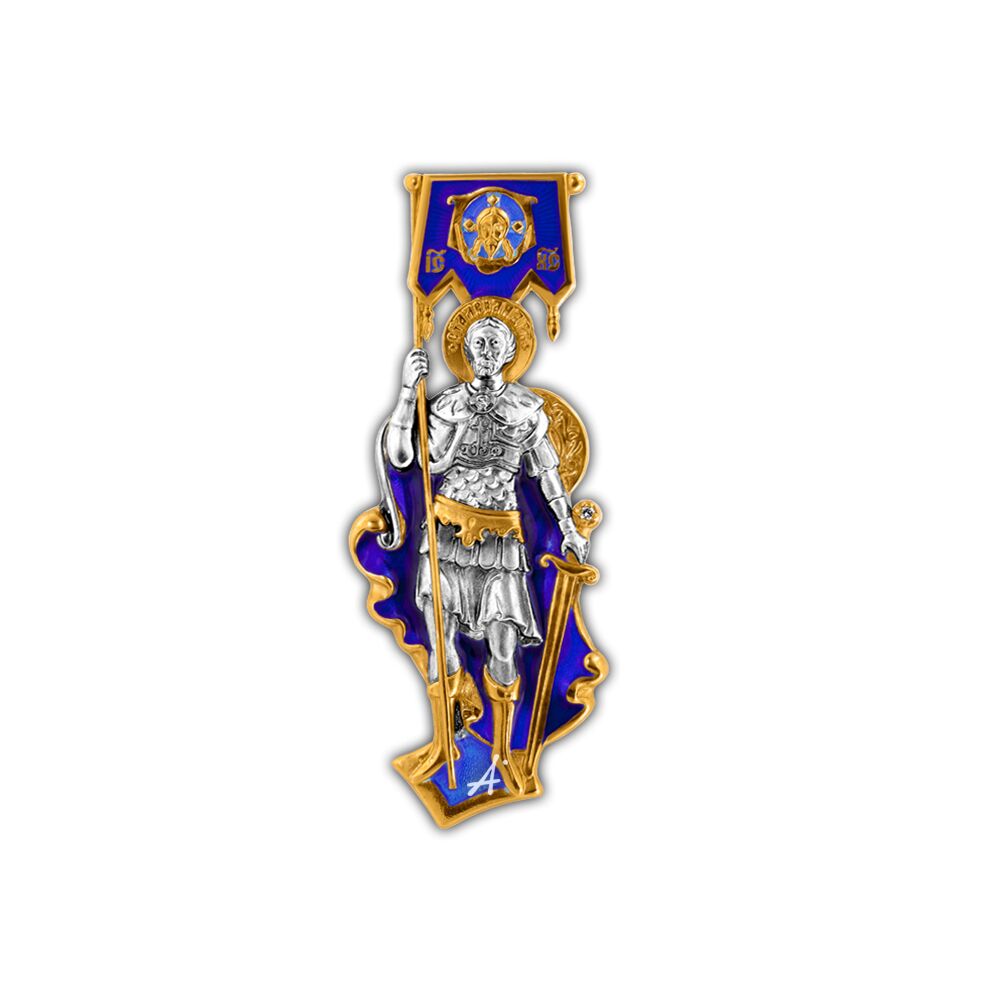 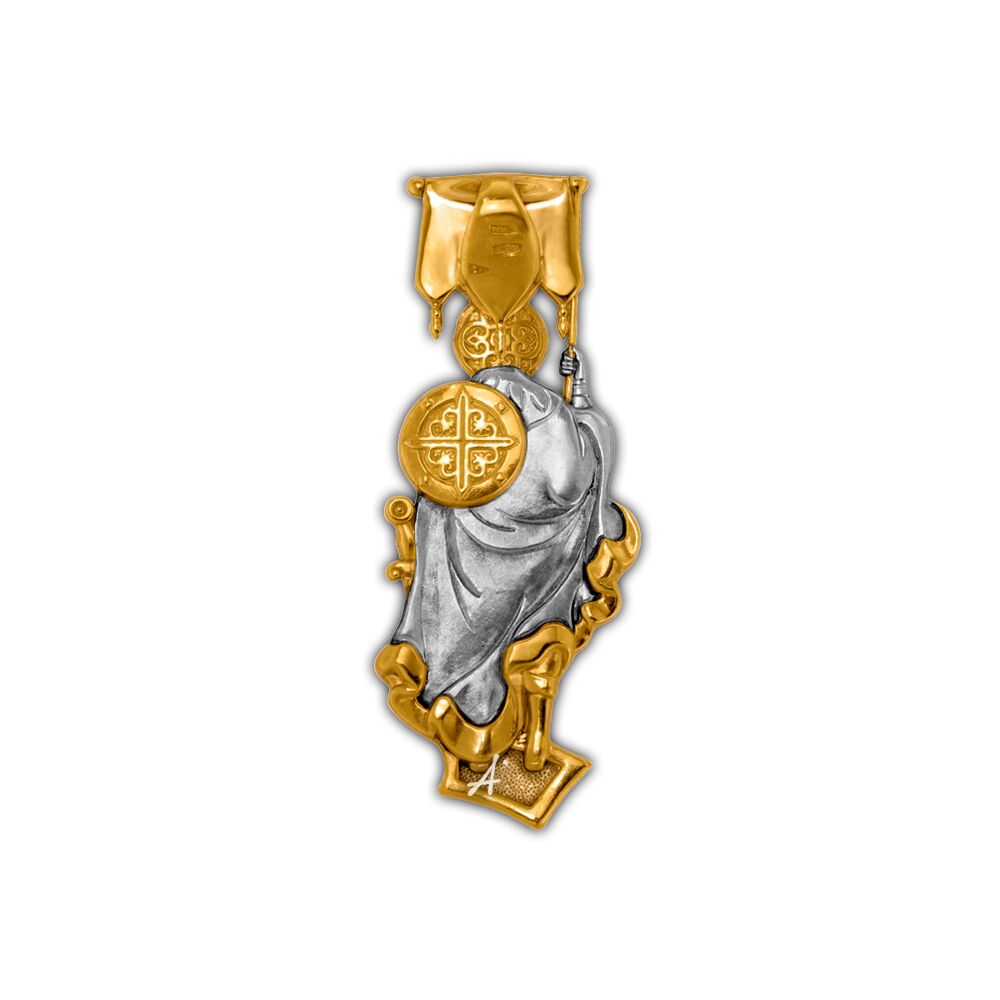 "We see a small cutwork icon, the artistic image of which – the figure of the Faithful Saint Prince Alexander Nevsky – is taken from the large icon located above the shrine of the saint in the Alexander Nevsky Monastery. Alexander is dressed both in armor as a great warrior, and into a rich cloak as the prince. Being the leader of Russian army in many battles he holds aloft a holy banner with the image of the Saviour – the Colours of ancient Rus‘.

The Faithful Saint Prince Alexander Nevsky was born on May 30, 1220 in the city of Pereslavl-Zalessky. His father, Jaroslav (baptized as Theodore) was the younger son of Vsevolod III of the Big Nest, his mother Theodosia being the daughter of Igor, Prince of Ryazan. In 1227 at the request of Novgorodians Prince Yaroslav started reigning in Novgorod the Great, having taken the sons Theodore and Alexander with him. There began the most difficult time in Russian history: the Mongol hordes were at hand from the east, from the West coming whole troops of knights. In this hour of danger Providence of God raised up St. Prince Alexander for the salvation of the Motherland; a great warrior and man of prayer; man of faith and the builder of the Russian land.

Using opportunity of Batu-khan invasion, the Pope declared a crusade against the Orthodox Church. The Swedes were the first to start striking at. Many ships commanded by Birger Jarl entered the Neva River. St. Alexander, who was then in his teens, prayed for long in Hagia Sophia of Novgorod; and Archbishop Spyridon blessed him for warfare. Coming out of the church, Alexander edified his men at arms with the words full of faith: ""God is not in might but in right. Some are armed, the others being ahorse, but we shall grasp the name of our Lord God!"" With a small squad, Prince rushed against the enemy. But there was a miraculous ostent: at July 15 dawn a patrolman saw a seaborne boat, and St. Martyrs Boris and Gleb in scarlet standing in it. Encouraged Alexander prayerfully and fearlessly led his army against the Swedes. ""And there was a great battle with the Latins, and we slew innumerable number of them and with a sharp spear imposed a hallmark on the face of their leader himself."" For this victory on the Neva River on a July 15, 1240 St. Alexander was called Nevsky.

On the same occasion German knights crusaded against Rus’. In 1241 in a tip-and-run raid Alexander returned the ancient Russian fortress Koporje, expelling the knights therefrom. In the winter of 1242 he released Pskov; on April 5 having given a pitched battle to Teutonic Knights on the ice of Lake Peipus (Chudskoye). The Crusaders were utterly annihilated. St. Alexander’s name became famous throughout Holy Rus’.

The western borders of Russian lands were securely protected; time came to secure Russia from the east. The country was unable to fight against two adversaries. The enemies from the West cut the Orthodox faith by fire and sword, enforcing Catholicism. The enemies from the East demanded gold only. Therefore, in 1242 St. Alexander Nevsky and his father Yaroslav went to the Horde, determining upon diplomatic negotiations. God willing, the sacred mission of Russian land defenders was crowned with the success, but it took years of labor and considerable sacrifice. Prince Yaroslav gave his life for that. It was St. Alexander Nevsky who continued to cement father bequeathed alliance with the Golden Horde, necessary then for avoiding a new defeat of Rus’. In 1253, he beat off new attack to Pskov; in 1254 he signed an agreement for peaceful borders with Norway; in 1256 he set out on a campaign against the Finnish land but supported Batu Khan in his struggle with Mongolia. In 1256 Batu Khan died. St. Prince for the third time went to Sarai for confirming Russia and the Horde amity with the new Khan, Berke. In 1261 due to the efforts of St. Alexander and Metropolitan Cyril the Diocese of the Russian Orthodox Church was established at Sarai, the capital of the Golden Horde.

The age of the great Christianization of pagan East arrived, participation that being historical calling of Rus’ prophetically guessed by St. Alexander Nevsky. Returning from the fourth trip to Sarai St. Alexander fell ill. Short of Vladimir in Gorodets monastery on November 14, 1263 Prince-ascetic gave up his soul to the Lord. Church-wide celebration of St. Alexander Nevsky was done under Metropolitan Macarius at the Moscow Council in 1547.

On September 12 (August 30 O.S.), 1721, after an extended and exhausting war with the Swedes Peter I concluded Treaty of Nystad. This day was decided to sanctify by translation of the relics of Alexander Nevsky from Vladimir to St. Petersburg – the new northern capital. On September 12, 1724 the relics were put in the Trinity Cathedral of the Alexander Nevsky Monastery, where they repose until now.

The saint Prince is commemorated on September 12 (August 30) and on December 6 (November 23).

The image was assiduously created by Anna Aksenova, the artist, and team members of the “Akimov” Company."