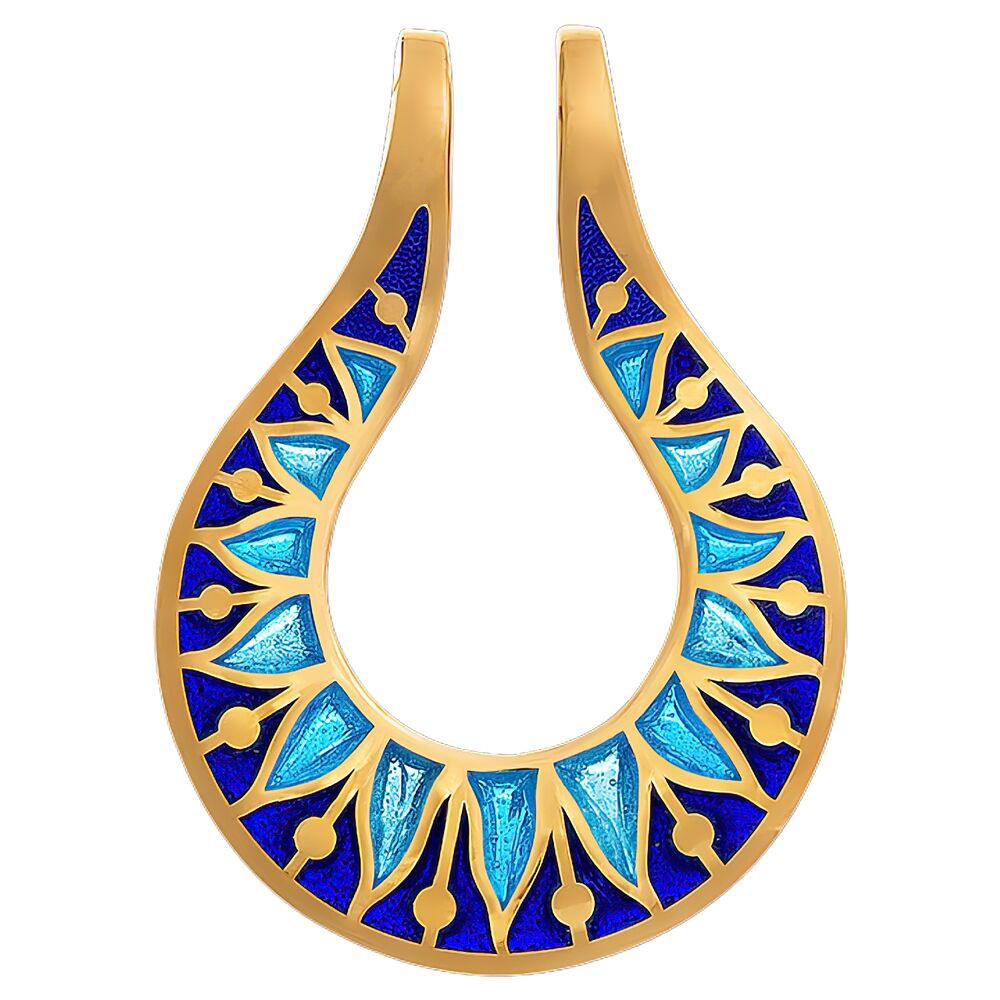 A semicircular pendant with stained glass enamel flickering in the rays of light is a very beautiful decoration, the shape of which is traditional for Ancient Rus. Among the Slavic peoples, tsata (another name is the neck grivna) was a symbol of power: an ornament, in the form of an open circle, was worn on the chest by princes and their high-ranking entourage. For the first time, the tsata was donated to the church image by the Suzdal thousandth George, the son of Simon, in the 11th century. This event is associated with miracles from the relics of St. Theodosius of the Caves and recorded in detail in the Kiev-Pechersk Patericon of St. Nestor the Chronicler.

The Suzdal Tysyatskiy, that is, the commander of the army of the city of Suzdal, was miraculously healed by the abbot of the Kiev-Pechersk Monastery, Venerable. Theodosius from eye disease and blindness. When St. Theodosius rested in God, he decided to decorate the tomb of the saint and sent his boyar Vasily to Kiev with vessels filled with gold and silver. It so happened that on the way Vasily's horses and food supplies were stolen, and he decided to compensate for the damage from the money he was carrying as a gift. God punished the boyar for theft: in Chernigov, Vasily fell and hurt himself so badly that he could not walk. He was taken on a stretcher to the Kiev-Pechersk Monastery. At confession, he repented of his wrongdoing and his weakness immediately began to recede. But the main miracle happened later. When the monks opened the vessels with gold and silver, it turned out that there was not less money, but more, and exactly for the amount of coins that Vasily took. News of this reached Suzdal. “Upon learning of what had happened, Georgiy Simonovich, tysyatsky, venerated his soul even more to the Holy Mother of God and Saint Theodosius, and to his abundant alms he added the hryvnia, which he carried, weighing one hundred hryvnias of gold”. Struck by a miracle, the pious tysyatsky sent to the relics of St. Theodosius his tsatu (hryvnia) as a sign that earthly human greatness is negligible before the power of the saints who pleased God.

Since then, precious tsats, together with gold and silver crowns in Russia, have become a traditional adornment of miraculous icons and temple crucifixes. Most often they were placed on the images of the Most Holy Theotokos, Nicholas the Wonderworker and Jesus Christ. Over the centuries, the shape of the tsat has become more complex, and the decoration has become more sophisticated. Tsats were covered with chased ornaments, precious stones, enamel. And, of course, they could be of various sizes, depending on the size of the image.

Our tsats are designed to decorate miniature images of saints from the collection "Holy Wives". Although, of course, they can be worn as an independent piece of jewelry, since they look very beautiful as a pendant. The quotes are made of stained glass enamel of different colors. Stained glass enamel is one of the most sophisticated and sophisticated techniques of artistic enameling, which appeared in Russia at the end of the 19th century. It differs from ordinary cloisonné enamel by the absence of a substrate, due to which it acquires transparency and the ability to transmit light, beautifully refracting it.