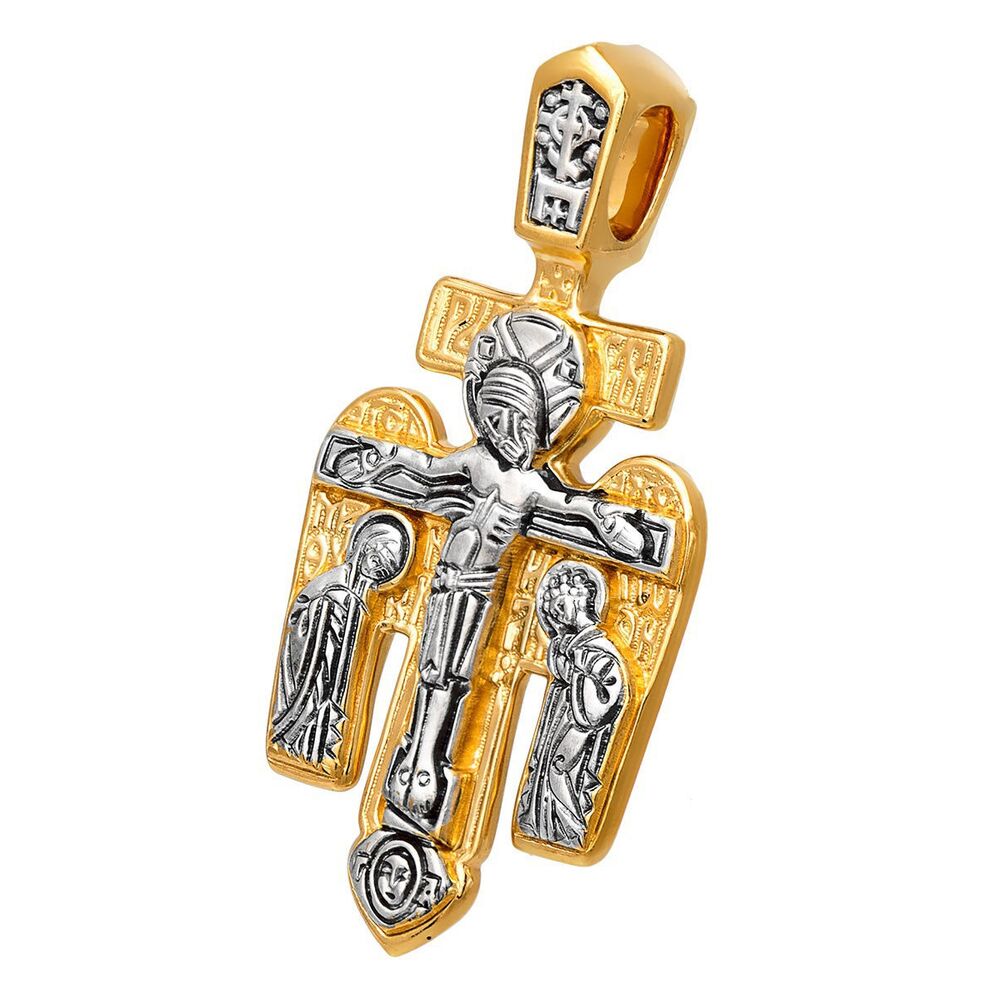 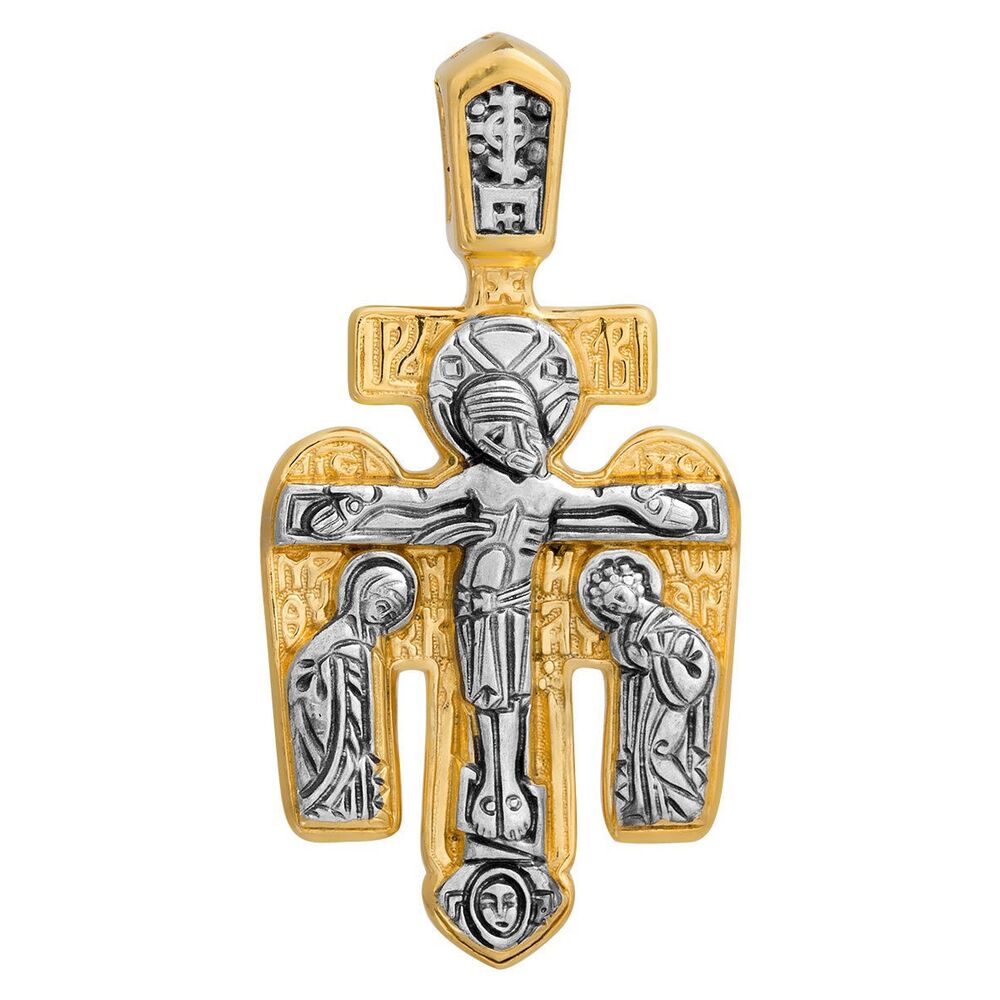 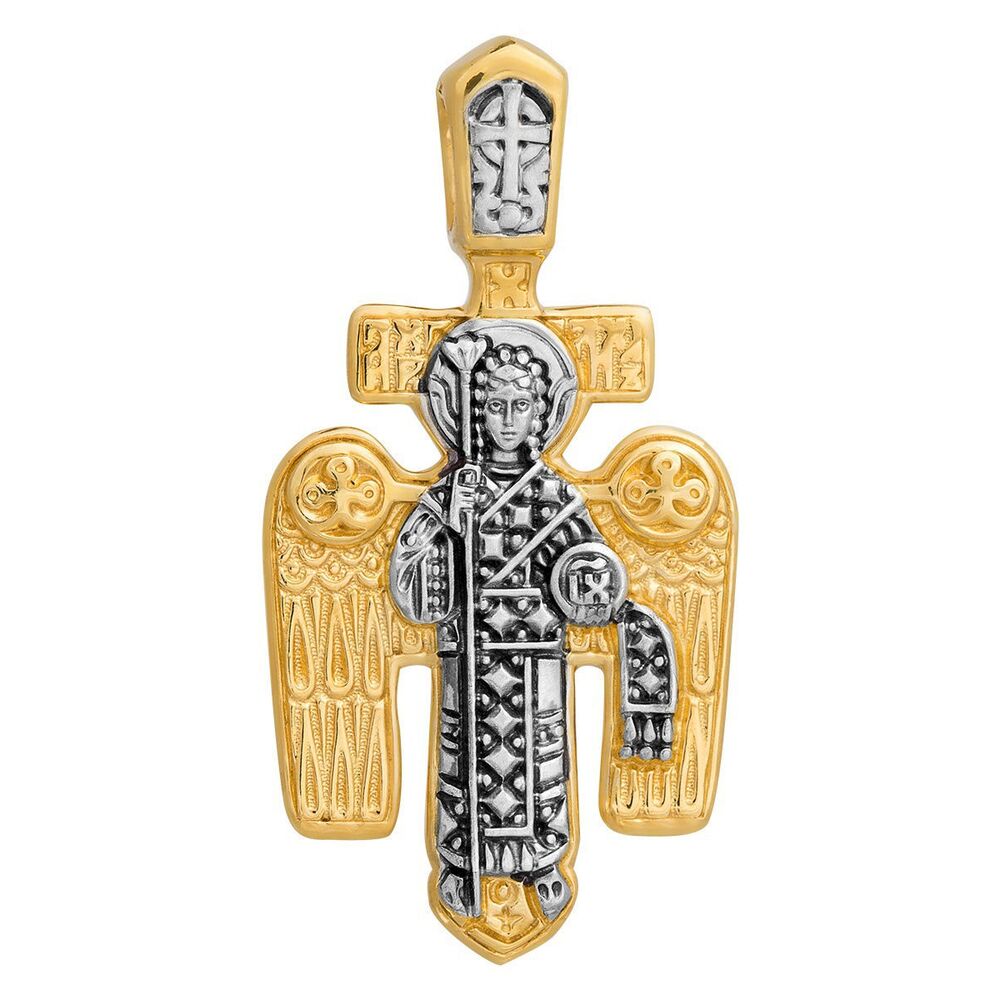 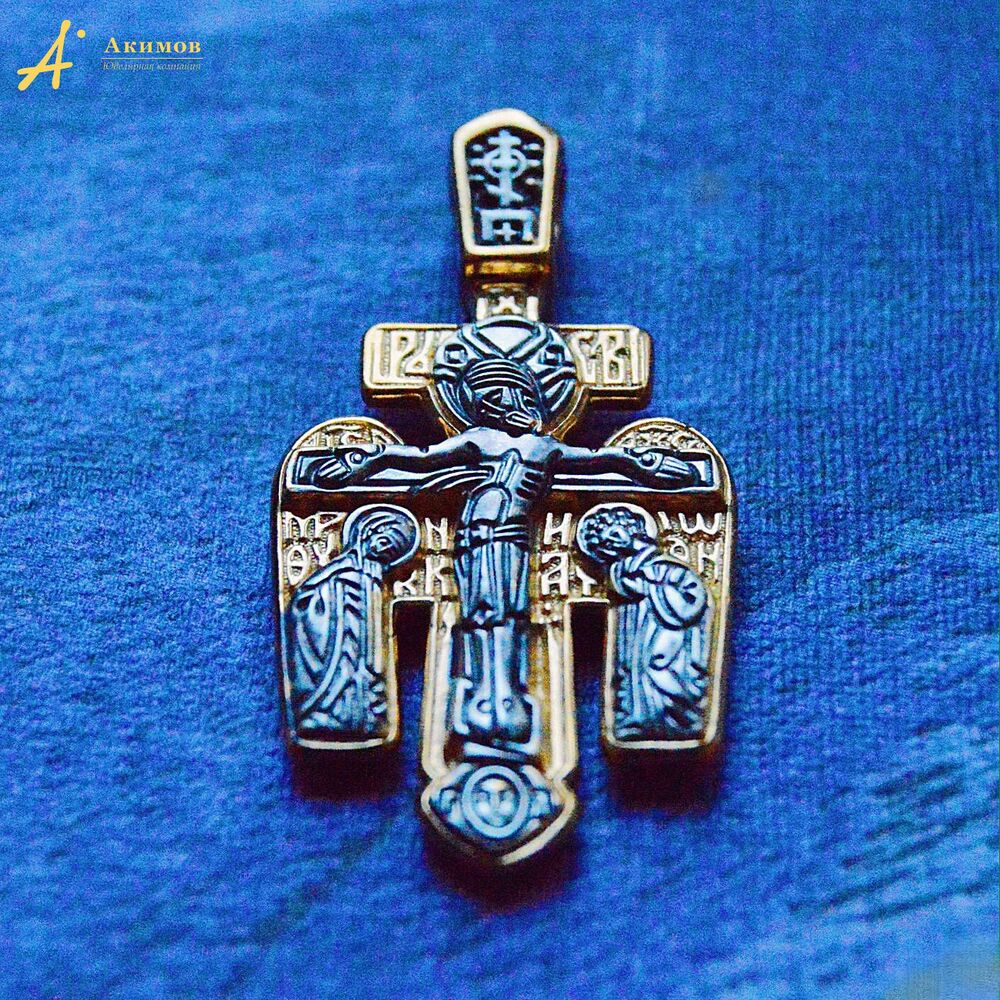 "This small cross having Calvary on the obverse and Archangel Michael on the reverse reminds the famous cross made by Russian craftsmen in 17th century, that is kept now in the History Museum collection. The Mother of God and St. John the Theologian, Apostle and Evangelist interceding with crucified Christ become the wings for the mightiest of all the angels – of the Archistratigus Michael. It is a symbol of spiritual grandeur of the Most-Pure Mother and of St. John the Theologian, Apostle and Evangelist, Christ favorite disciple.

The Lord was crucified near Jerusalem on the Golgotha (skull, forehead, in Aramaic) between two thieves. By the Legend His Cross was erected at the very burial place of Adam – the earliest sinner in the world. Therefore Adam’s skull and his crossed arm bones are pictured at the cross foot, Golgotha being called the Execution Place.

«Crucifix. Archangel Michael»At Orthodox crosses the Lord is shown reposing freely on the cross, extending his hands as if embracing entire the Universe. He is the Saviour whose death was a propitiatory sacrifice to the Father for the sins of the world, who “has trampled down death by death”, is invocatory for “all ends of the world” (Isaiah 45, 22). “The King of Glory” is written over His head.

After cruel execution of Christ most of Apostles was frightened at being persecuted, and hidden. Only the Mother of God and John the Theologian remained near the Cross. The Gospel tells that on seeing his mother and the most beloved disciple of Him, standing beside, Jesus said: “Woman, behold thy son”, and entrusted his Mother to the care of John, the Apostle.

Apostle John, the youngest and the most beloved disciple of Christ, is the author of the fourth –the latest – Gospel that is called “spiritual”. By the Legend he wrote his text in addition to the Gospels of Matthew, Mark and Luke wherein narrated of Christ as of the only-begotten Son of God, as of light of the world, Divine word.  Apostle John also wrote three letters and the Revelation that was sent down upon him at the island of Patmos.

He regarded the love commandment to be the main one in Christ doctrine, and taught that merely its implementation is able to clear the way to salvation. By the Legend in his old age Apostle John has been taken alive up to Heavens whereat together with the Mother of God he prays God diligently for mercy towards people. He is commemorated on May 21 and October 9.

The Most Holy Mother of God is spoken of very little in Gospel. The story of Her life remained in the Legend, in apocrypha, and in testimonies of the saints who has known Her in Her life. The Mother of God lived a little over seventy years, and hasn't once committed a sin even inwardly dedicating Herself to God. She has been the only of all people to resurrect like Jesus Christ on the third day after death, and became the great woman of prayer and the Heavenly Mediatress for mankind at His throne.

The Archangel Michael portrayed on the cross reverse is also the unconquerable human protector. He is high commander of Heavenly host (commemorated is on November 21) wherein Guardian Angels serve as well. The name of him means “Who is like God?”, since he is the mightiest and most redoubtable enemy of evil. He was the first to assail Lucifer who revolted against God, to subvert him down from Heaven and never to cease fighting against evil hosts thereof. Therefore he is often pictured as an armored warrior with fiery sword. But being both the Heavenly Lord servant, and Angels and Archangels Head, on many icons he is often showed in rich garments of Byzantine courtier. On this cross he is exactly portrayed as a courtier: in a long dalmatic tied up with wide ribbon jewels decorated, he holds a mirror in one hand and scales – in the other. Large wings are behind his back, ribbons twining around the Archangel head, to symbolize his keen ear and eye to God.

The Archangel Michael is venerated as ferocious fighter against evil who guards human souls from devil attacks. That is why he has been often pictured on next-to-skin crosses. In medieval Russia princes and warriors aspired to the Heavenly Voevode auspices, and decorated their helmets with his winged figure. Cemetery churches were often dedicated to the Archangel Michael, and the cathedral in Kremlin was consecrated in his honor that was built as burial-vault for Moscow Princes and afterwards for Russian tsars.

Together with the other fleshless Heavenly Forces and with the Archangels Gabriel, Raphael, Uriel, Salafiel, Jehudiel and Varahiel, the Archangel Michael is commemorated on November 21 and September 19.

According to St. John of Kronstadt, for believers the cross is “the great force delivering us from all kinds of evil, especially from villainies of hated enemies” that protects not only the soul, but the body as well."