Neck Cross Akimov 101.025 «The Lord Almighty (Pantocrator). Eulogy on the Mother of God» 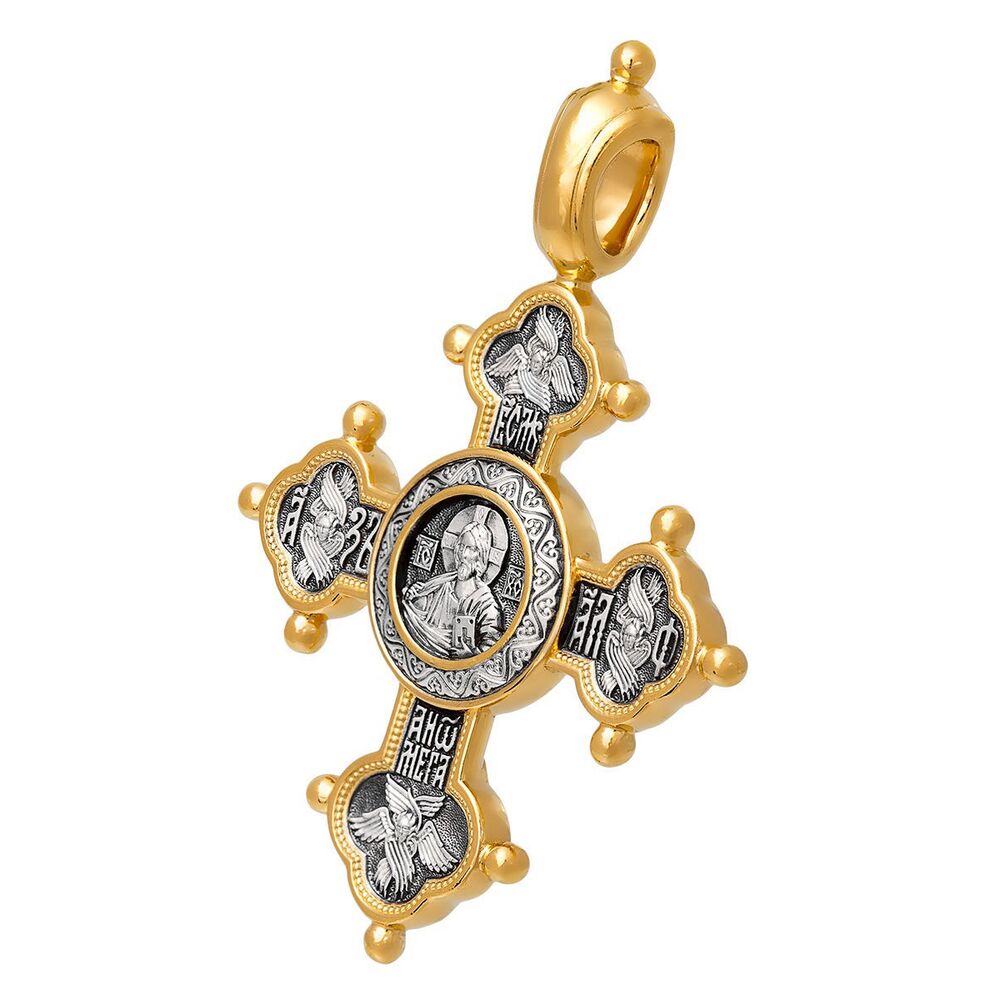 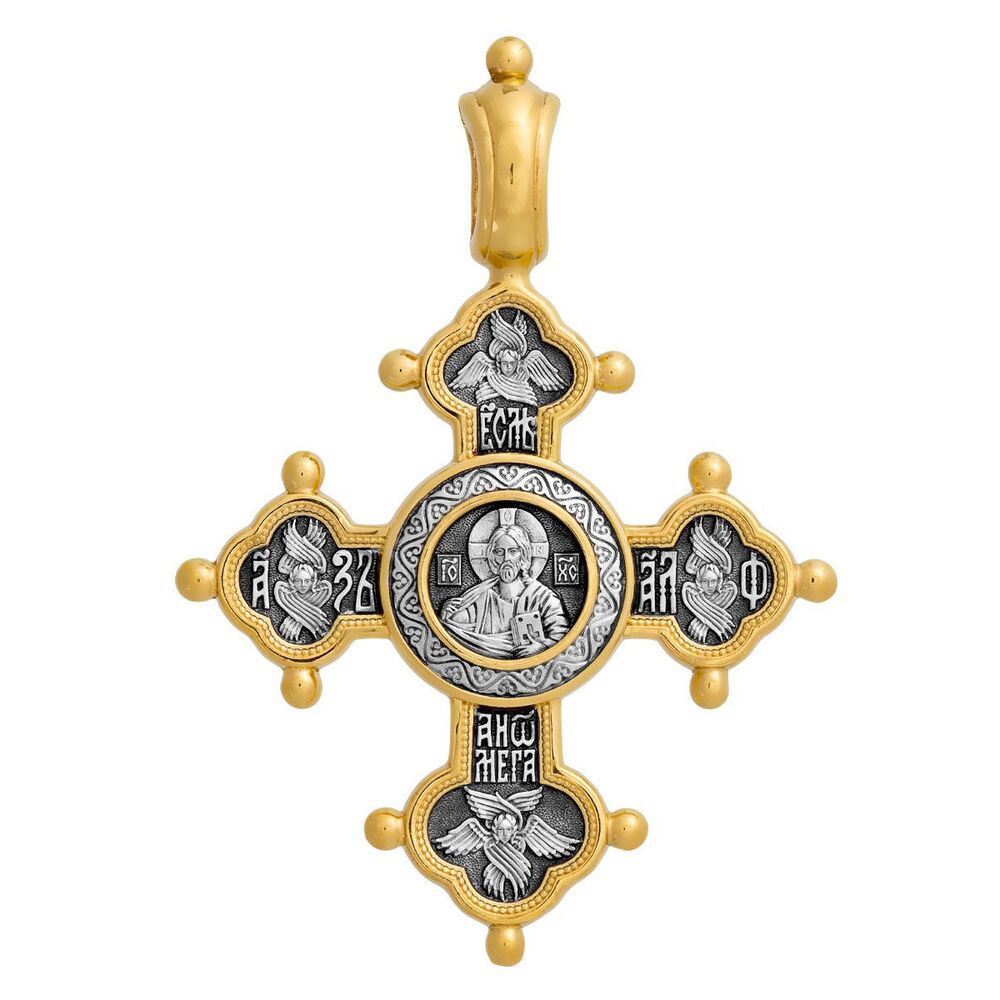 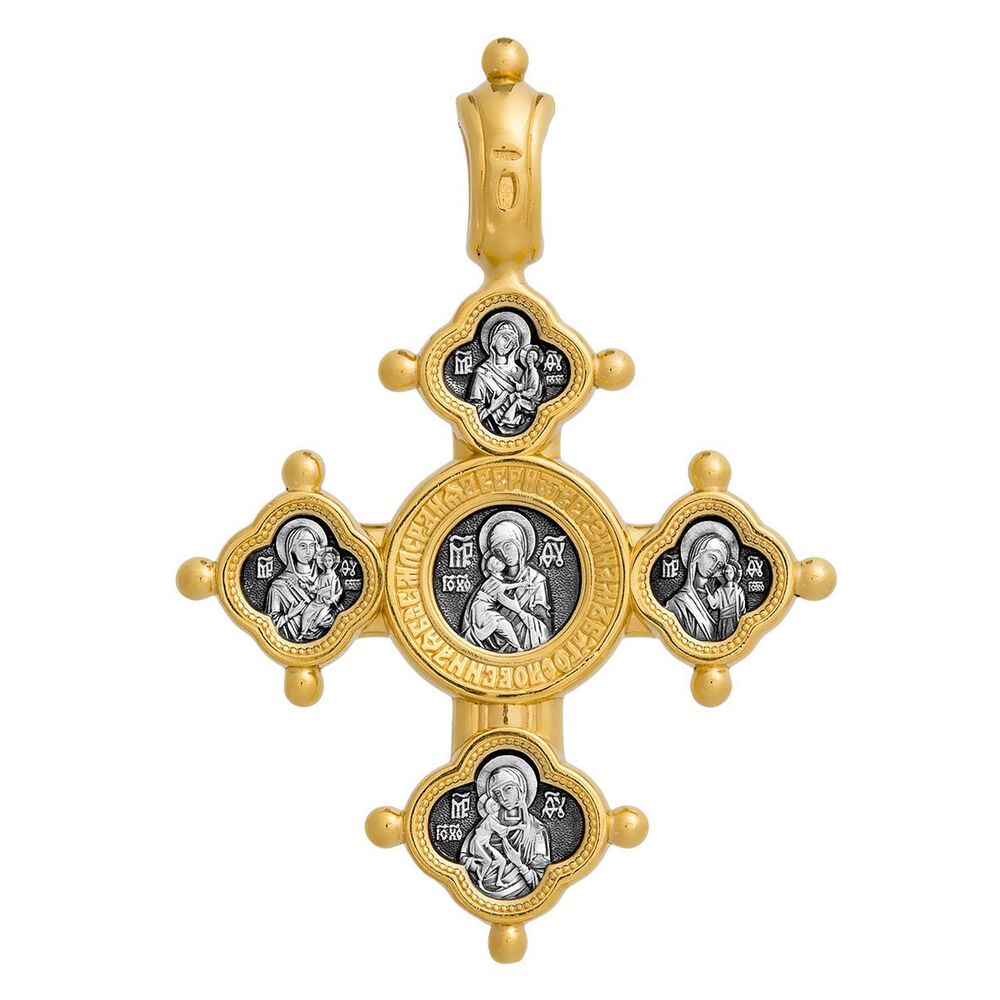 On the obverse Christ appears as the Lord Almighty, the universe Creator and Stern Judge reigning in the Heavens. Heaven is symbolized by gold circle wherefrom the crossbars radiate. On three-ended crossbars – in reminding of the Holy Trinity – pictured are higher angels standing in the front of the Divine Throne: seraphs (six-winged) and cherubs (four-winged). The Apocalypses words are scripted around: “I am Alpha and Omega“. It is the Lord revelation, that He is the beginning and the end: the first cause and last end of all beings.

The cross shape symbolizes four parts of the world to be unified, and is a symbol of joining the earthly (horizontal crossbar) with the Heavenly (transversal crossbar). The obverse symbolically shows the Heaven Kingdom, the Russian one being represented on the reverse. This is an orthodox image of our motherland as of Sacred Russia, the Mother of God home, of the Divine Throne pedestal.

Being the main sacred thing of Russia the Vladimir icon of the Blessed Mother of God abides in Russia heart where tsar's and patriarchal thrones are. By Orthodox legend it was the first icon of “Eleusa” (“Tenderness”) type to be painted by Apostle Luke on the table top whereat the Holy Family refected. This wonder-making icon was sent to Russia in 1131 by Luke Chrysoberges, Patriarch of Constantinople as a present for the Grand Prince Yuri Dolgoruki. For centuries the Vladimir icon has been a personification of Motherland for Russians. It was entrusted with blessing Russian tsars being crowned and patriarchs being elected. It was “to the Vladimir image of the Mother of God” that the warriors vowed fidelity to Motherland and died at the battlefield. Multitude of stories is bound up with the Vladimir icon narrating of the Mother of God particular patronage and auspices for Russia. Since then the icon has been residing in Moscow (today – in the functioning Church of St. Nicholas in Tolmatchi of Tretyakov Gallery). Commemorated is on June 3, July 6 июля, September 8.

Since 1383 the Northern borders of Russia have been guarded by the Tichvin icon of the Mother of God. By legend it came by itself from Byzantium stalking along the sky in the glare shine, visible miles and miles around. It stopped near the river Tichvina, and a church was carpentered there, and in 16th century the monastery of Tichvin was built by John the Terrible order. Since then the icon has been worshipped as an enlightener and a guardian of the North-West of Russia, maker of innumerable wonders. In the Second World War time the icon was get out to USA but in 2004 returned to the monastery of Tichvin with great ceremonials. Commemorated is on July 9.

At the foot of the cross there is the Feodorovsky icon of the Mother of God. By legend in 11th century it has already been in a small chapel near city of Gorodets at Volga. During the Russian Distemper Times (1604–1613) it was that icon that Michael Romanov was blessed by for reigning. Nowadays the Feodorov icon of the Mother of God is in cathedral church of Kostroma. Commemorated is on March 27 марта, and on August 29.

In the West the Smolensk icon of the Mother of God (commemorated is on August 10) has blocked way of enemies to Russia since 11th century. By legend it was this icon that Byzantium Emperor Constantine Monomachos blessed his daughter Anna by for marrying Vsevolod, son of Yaroslav, the Prince of Chernigov in 1046. The son of them, Vladimir Monomachos has placed the icon in Smolensk where it resides till now.

Since Kazan khanate having been annexed, the East of Russia is guarded by the Kazan icon of the Mother of God that appeared miraculously. Wonders worked by it are innumerable: it has helped and goes on to help in battles, in diseases, in family troubles...  In dreadful Time of Distemper in Russia (1604—1613) it was a shield and blessing for squads of Koz`ma Minin and the Prince Demetrius Pozharsky (commemorated on July 21 and November 4) who liberated Moscow of foreign invaders. In 1904 the sacred thing was destroyed by two sacrilegious persons but its wonder-making copies remained intact in Moscow, and Petersburg, and other cities.

The cross with Our Lady icons took its shape in 19th century. Cathedral icons then were also started being painted whereto the painters tried to place as many of celebrated the Mother of God images as possible. Such collections of icons brought together were named in honor of holy day of Eulogy on the Mother of God."