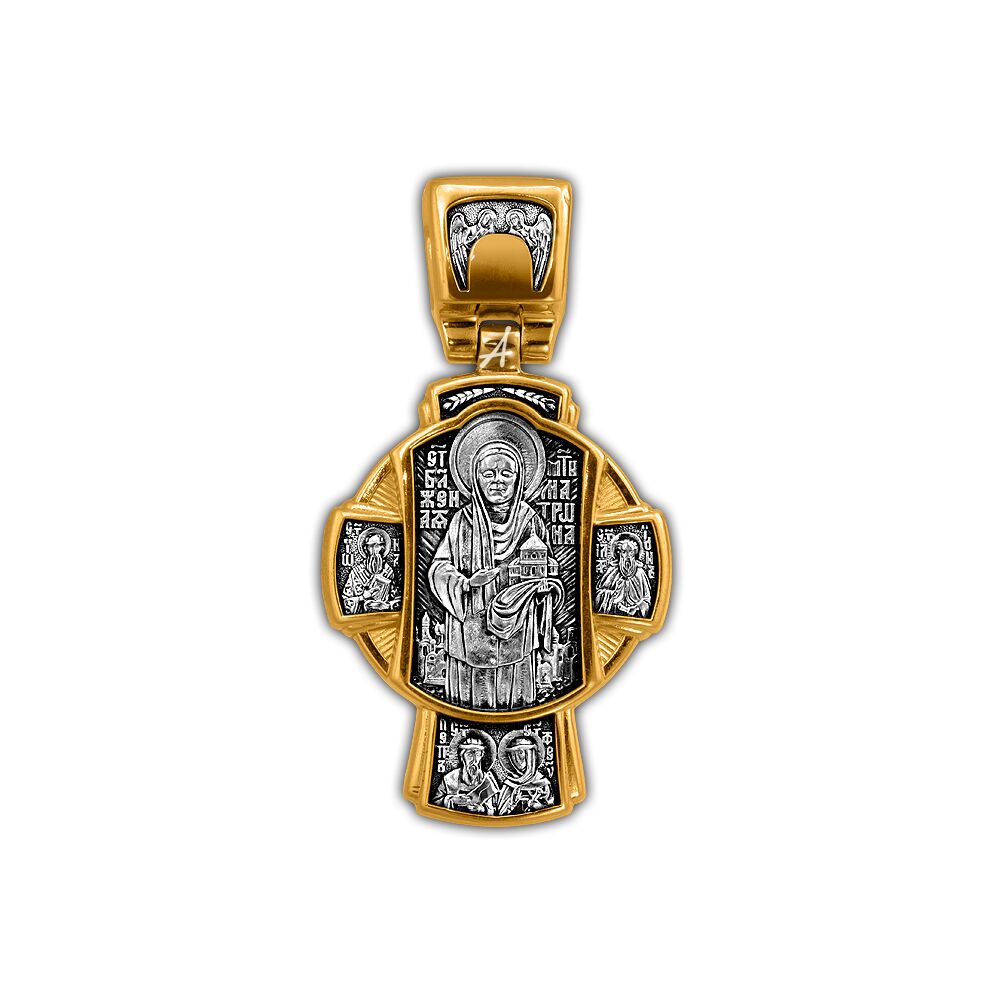 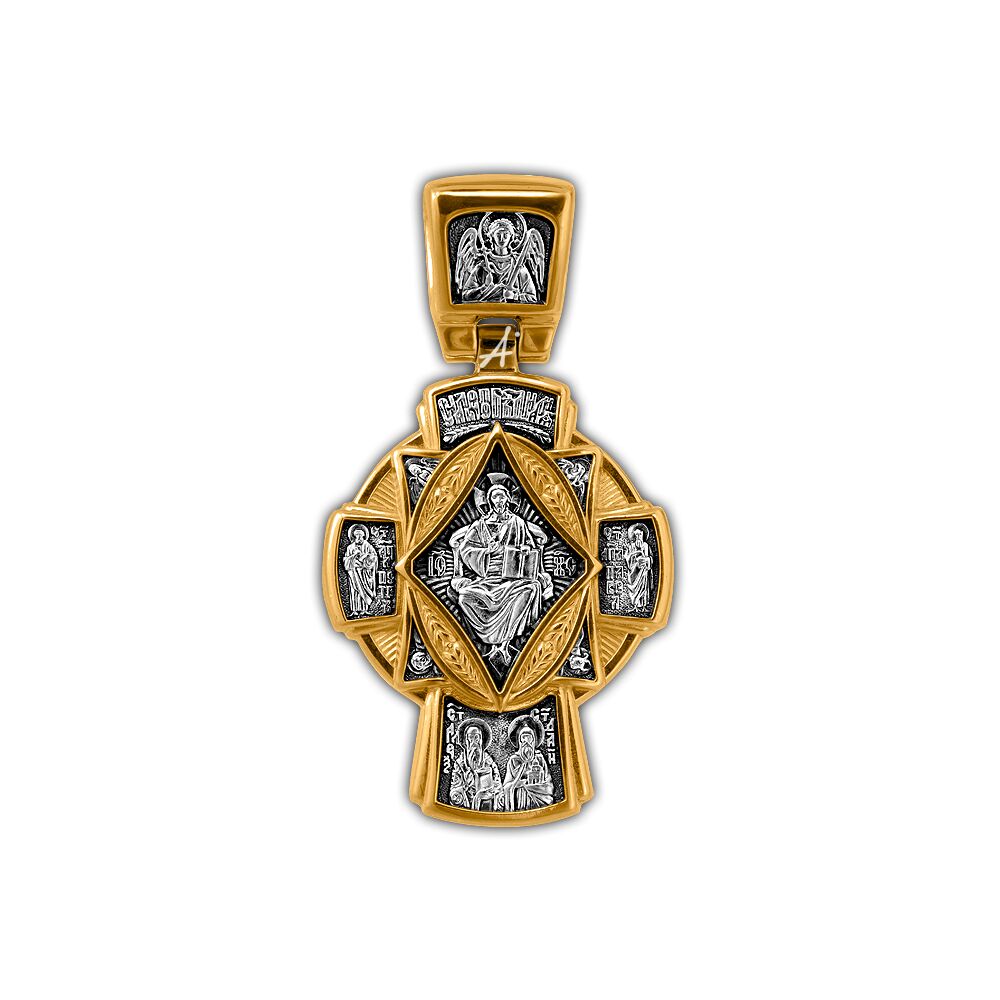 "Large multipart cross of traditional Russian shape, in which the cross is combined with the circle, is dedicated to the Convent of the Protection Veil of the Mother of God (Pokrovsky) in Moscow. On May 1, 1998 the relics of St. Matrona of Moscow were transferred to this Convent.

In the center of the cross obverse there is a large icon of Jesus Christ enthroned surrounded by seraphim, cherubim, and the symbols of the four Evangelists. Such iconography is called Christ in Majesty. Usually, it is placed in the center of the iconostasis. Rhombus with the figure of Christ in it is a symbol of New Jerusalem, the quadrilateral with evangelists in the corners being a symbol of the earth. The image meaning lies in connection of Heaven and earth in Jesus Christ, which should happen in the end of the age. Over the image of Christ the words are placed on the cross: ""Jesus is the invincible might.""

To the right and to the left of the Savior image there are icons of Peter and Paul, the Apostles; they are dedicated to the side-chapels of the basic temple of the Convent – of the Church of Intercession of the Virgin where the relics of St. Matrona. Below we see the most revered Moscow saints, by whose efforts and prayers the city has been built and risen for centuries. These are St. Alexis, the Metropolitan of Moscow, who lived in the 14th century, and St. Daniel, Ven. Prince of Moscow (13th century), the son of Alexander Nevsky and the father of Ivan Kalita, known for his non-possessiveness and love of peace. He has been a good, pious and brave ruler, and is revered as the founder of the princely dynasty of Moscow. St. Alexis headed the Moscow cathedra under St. Prince Dimitry Donskoy; he was teacher and counselor of the prince. He is revered as a miracle worker and defender of the Russian land.

In the center of cross reverse St. bl. Matrona (1885 - May 2, 1952) is portrayed. Blind from birth, she was endowed with the spiritual vision since childhood. Blessed Matrona was able to read in the human heart and mind, as well as a prophetically see ahead. The Lord gave her strength to console sorrows, and to heal the sick; all her long life, full of bitter hardships and miseries she helped people gratuitously, refusing aid nobody. Even on her deathbed, the mother instructed: ""All of you, everyone come to me and tell me of your sorrows as if I were alive, and I will see you, and hear you, and help you.""

On both sides of St. Matrona of Moscow placed is the icon of St. Jonah of Moscow, who lived in the 15th century; and of St. Hilarion, the Palestinian hermit of 4th century. Thrones of the saints are in the Church of Intercession of the Convent. These are great healers and miracle workers, assistants to people and defenders of the faith.

At the bottom there is the icon of the holy marrieds Peter and Fevronia of Murom. Dedicated is to them one of the temples of the Convent, where the sacraments of Baptism and Nuptials are worked. The faithful saint spouses Peter and Fevronia of Murom reigned in the city at the beginning of the 13th century. The couple happily lived in love for God, people and each other, sharing both the joys and tribulations.

There are no religious acts or martyrdom in their Life of. However, the Church has glorified them as saints. Because it is very difficult to hold the purity of marriage, love for God and true to the commitments in persecutions, poverty, illnesses, temptations of wealth and power – and remain a perfect example of Christian marriage."