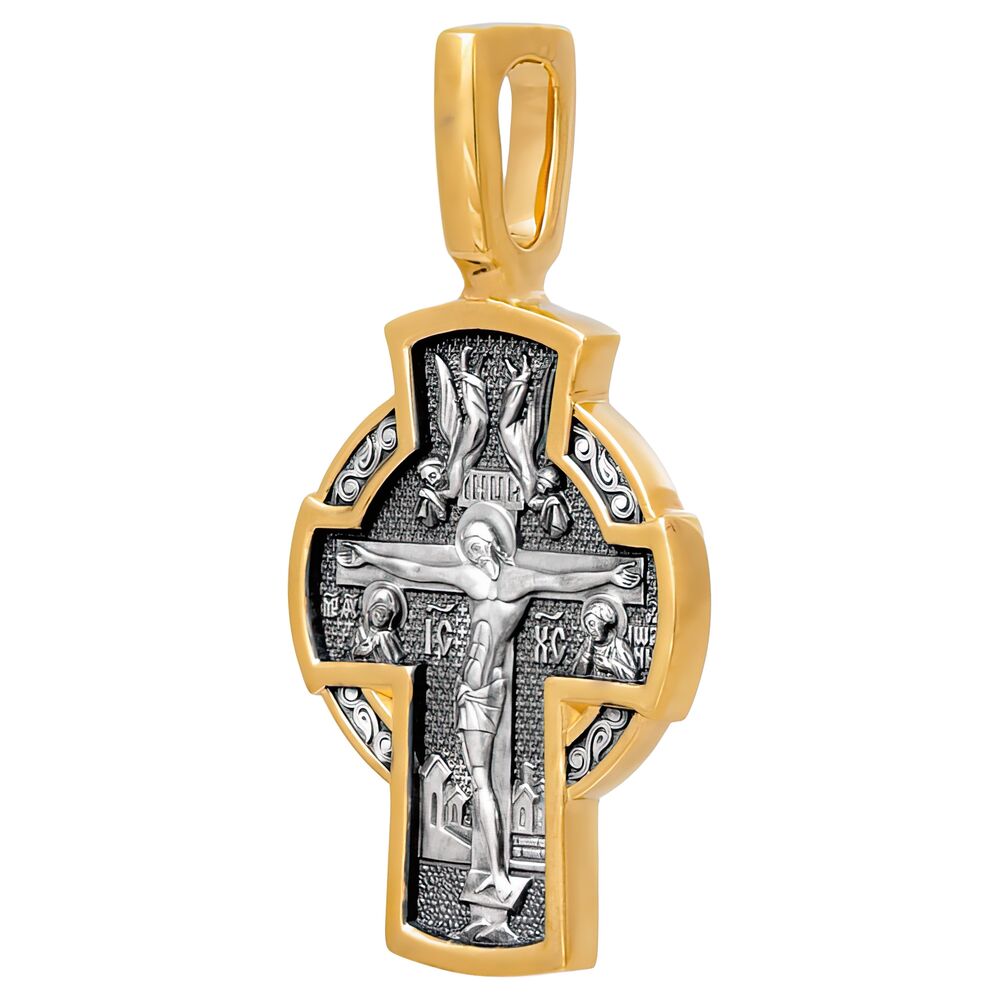 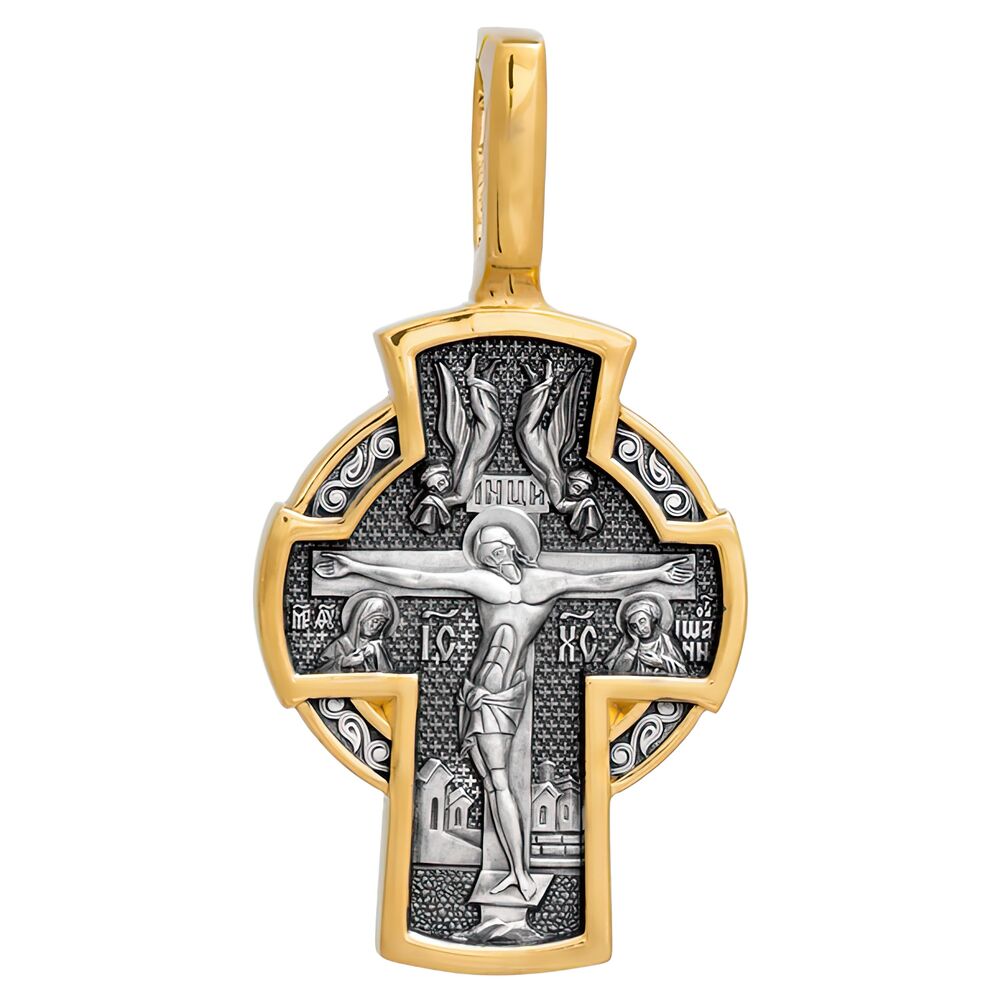 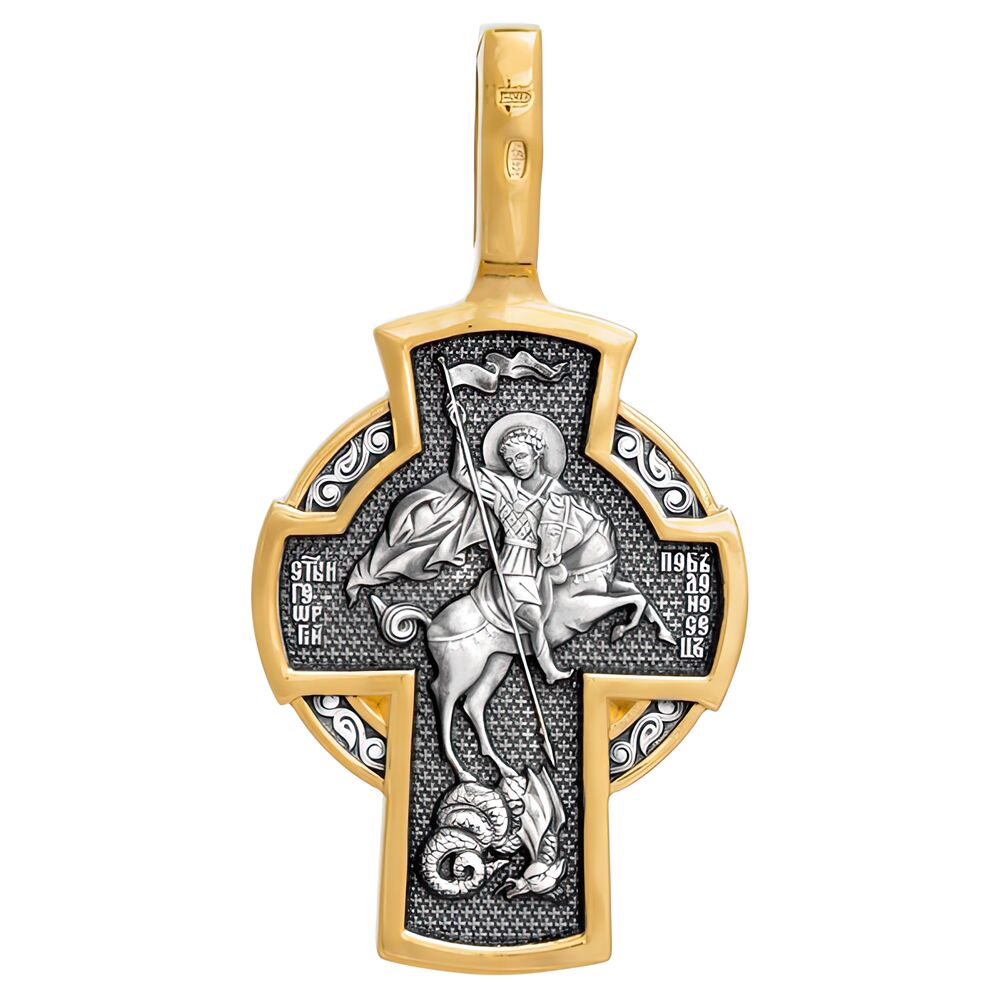 The large pectoral cross with the Crucifixion on the front side and the icon of St. George the Victorious on the back has an ancient form full of deep symbolism. It is made in the image of ancient Russian crosses, the crosshairs of which were often surrounded by a circle. The circle connected to the cross symbolically means eternity, given to the world through the sufferings of Christ. It is also an image of the fact that the Lord Savior is the Sun of Truth and the light of the world, who shone from the Cross and drove away the darkness.

In Ancient Russia, there was a widespread tradition of hoisting worship and mortgage crosses, which often had the same shape: stone crosses with a circle were installed when laying temples, monasteries and even cities. During construction, such a cross was then embedded in the wall of the building. Churches with similar crosses have been preserved in many ancient Russian cities. But most of them are in Veliky Novgorod.

In the Russian North, there was also a custom of erecting crosses in memory of some important event. So people wanted to thank the Lord for His help and miracles. Crosses erected in honor of military victories were called "nikitirions". The real cross also sends us to the ancient Russian victorious nikitirions.

The front side of the cross depicts the Crucifixion of Christ - a majestic, solemn image of Christianity, a sign of victory over death. Christ, offering Himself as a Sacrifice on the Cross, atoned for the sins of the whole world and made it possible for people to gain salvation. To the left and to the right of the Cross are the Mother of God and the Apostle John the Theologian. According to legend, it was they who did not leave the Savior in His sufferings until the very end, they were with Him until his death.

Angels hover above the Crucifixion. They are depicted flying down from Heaven to the Cross. The angels seem to support a tablet above the head of the Savior, on which is written INCI - "Jesus the Nazarene King of the Jews." This tablet - the title - was nailed by the Roman executioners as an indication of the "guilt" of Christ, that for which He was executed.

The reverse side is dedicated to the Great Martyr George the Victorious - one of the most revered Christian saints. The saint died during the terrible persecution of Christians by Emperor Diocletian at the beginning of the 4th century. In Russia, the warrior-martyr has always been especially revered in the form of the Victorious: striking a terrible serpent on a horse. This is the most common iconography of St. George, which appeared in Russian Orthodoxy already in the 12th century. A brave warrior saving a beautiful princess: this story has been living in the mythology of many peoples since ancient times. But in Christianity it has always been interpreted symbolically. The beautiful princess is a symbol of the human soul, which is meekly ready to be devoured by the devil. But the warrior of Christ will not allow this - he is the messenger of God, saving the pure souls of people from death. After all, the merciful Lord does not want anyone to perish.

George the Victorious became a symbol of the Russian state, the Russian army. The image of the defender and savior of the weak and disadvantaged, the Christian martyr, who is not afraid to lay down his life "for his friends", has always been close to the Russian people. Therefore, since the 17th century, this image has been in the coat of arms of Russia.

The artist Olga Pikovskaya and the creative team of the Akimov company worked on creating the image.