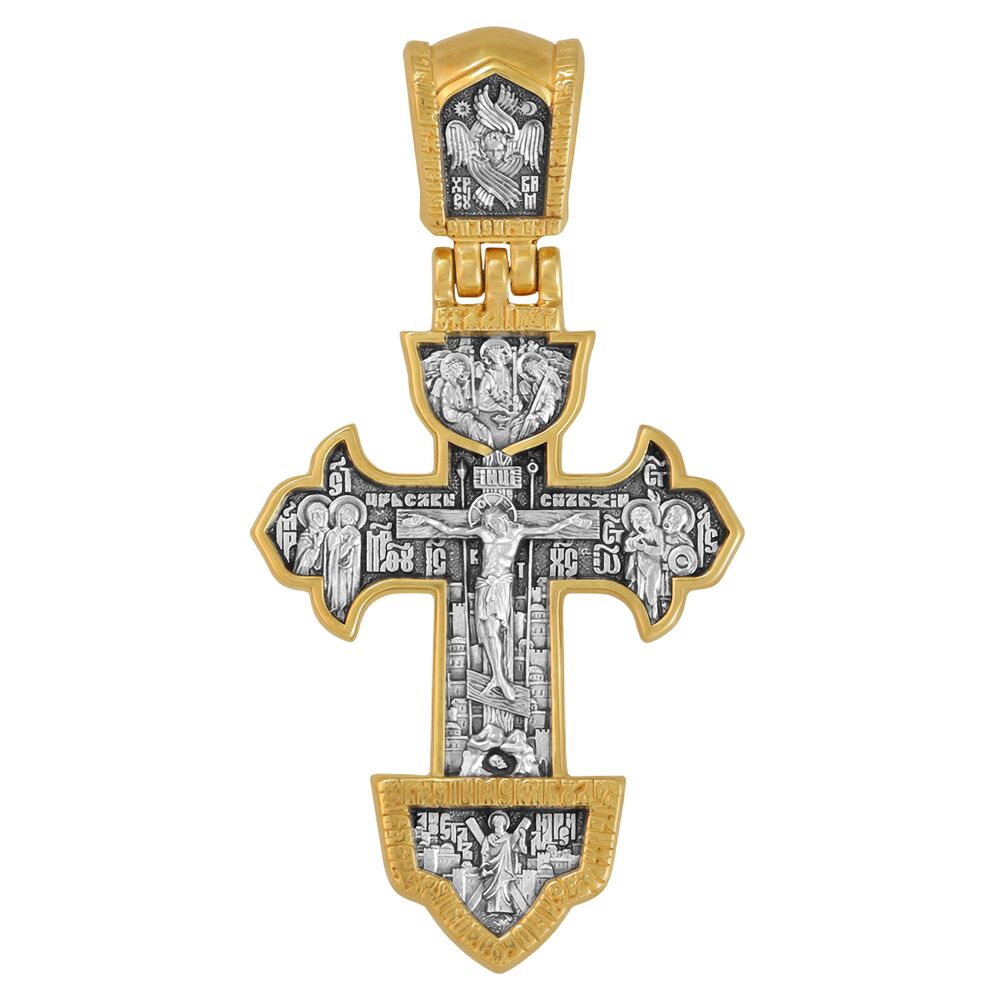 The cross of the traditional Old Russian "anchor" shape is also traditional in its figurative filling. In the center is the Crucifixion, on both sides of which are placed the figures of the Savior, the Most Holy Theotokos, Mary Kleopova, John the Theologian and Longinus the Sotnik who were present during the suffering of the Cross. The latter was one of the executioners, but believed at the Cross, and soon accepted a martyr's death for this. Above, above the cross, is the icon of the Holy Trinity, below - the Apostle Andrew the First-Called. He was the first to follow Christ, brought to Him his brother, the Apostle Peter. The Apostle Andrew was crucified on an oblique cross, which is often depicted in his icons. Around the image of the Apostle Andrew is written the prayer "Cross, wake me a fortress and power, shield and guardian, victory and my affirmation."

On the ear crowning the cross, around the six-winged seraphim, the troparion to the Lord's Cross is written "Save, Lord, Thy people and bless Thy property, granting victories to the opposite and preserving Thy residence with the Cross."

On the reverse, in the center, there is a stern figure of the Archangel Michael - the commander of all the angelic forces of the Lord. To the left and to the right of him are the icons of Russian saints who, not being soldiers, spiritually nourished the Russian army and showed extraordinary personal courage in their service to God. This is St. Sergius of Radonezh, St. Philip of Moscow, St. Peter and St. Luke Krymsky. Above is the image of Nicholas the Wonderworker, a beloved saint, the patron saint of sailors. Below is an icon of one of the miracles of St. Nicholas the Wonderworker - "The Miracle of the Three Shipwrights" The miracle tells of how merchants who perished in the sea, robbed by shipbuilders, turned to St. Nicholas and were miraculously saved by him. At first they were, like the prophet Jonah, swallowed by a fish, then "spit out" by it on a stone that rose from the depths of the sea, and then on a stone, like on a ship, they were delivered to the city. The ruler of the city, having learned about the villainy of the robbers-shipbuilders, punished them and returned the goods to the merchants.