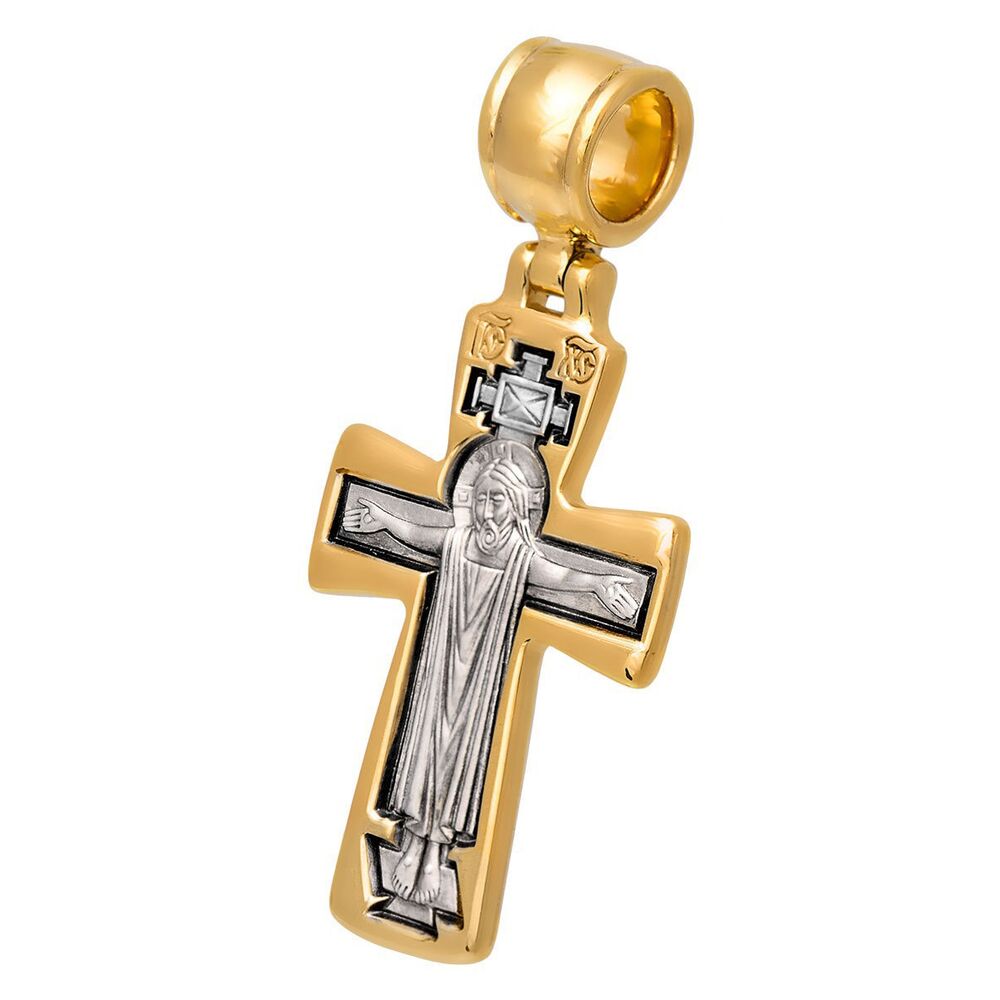 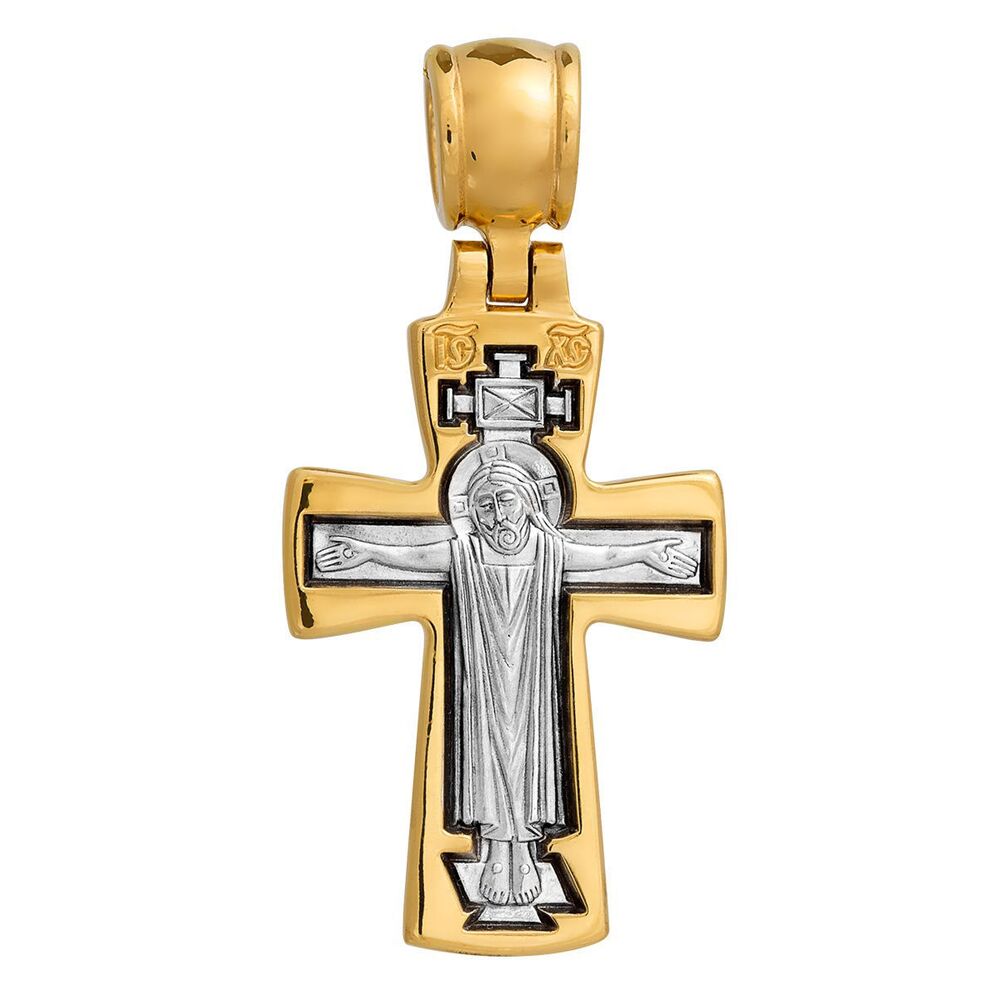 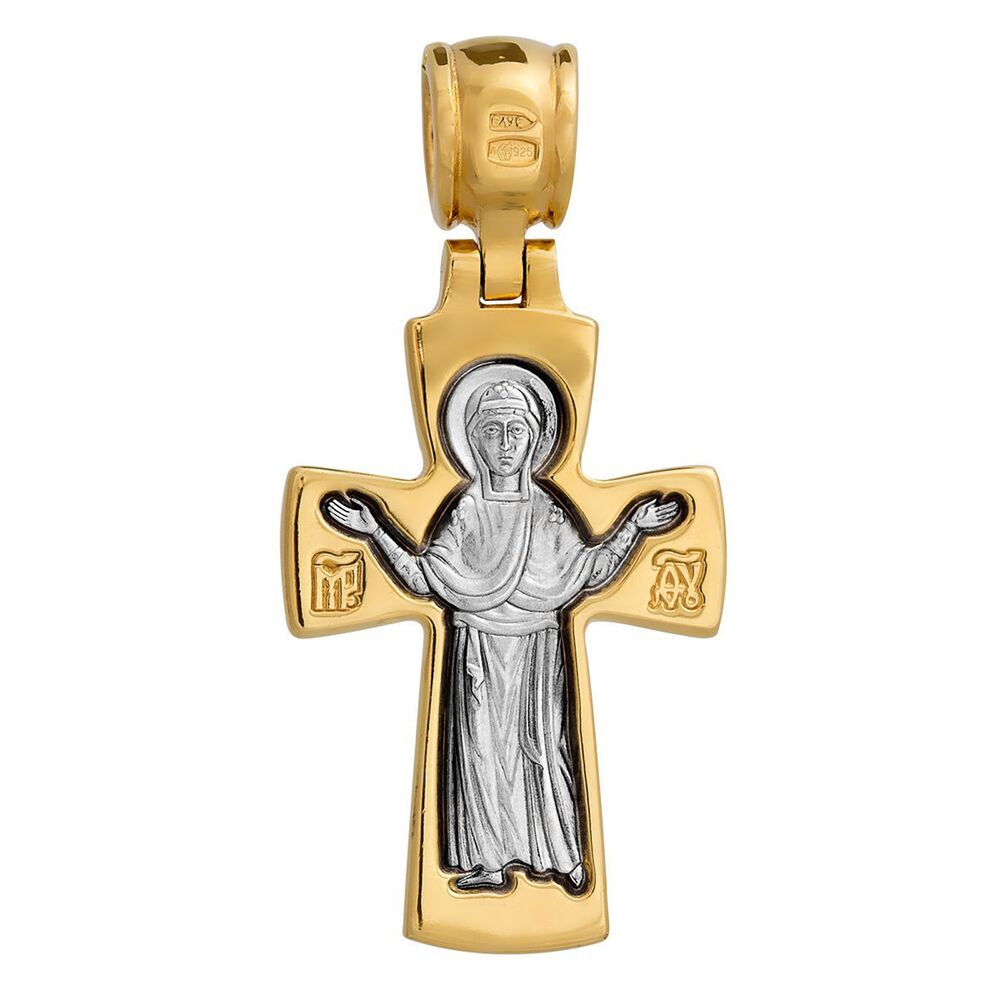 "This small next-to-the-skin cross with slightly widening ends is a replica of the most ancient crosses widespread all over the Eastern Church world. In its regular four-ended shape the Holy Fathers saw a symbolical image of God-created world. They compared those intersecting crossbars bound in the center with the Universe spreading in breadth and rising from the earth to heaven; the Universe bound and strengthened in its Creator.

Just the crosses of this simple kind, with the icons of Christ and the Mother of God, were most often worn Byzantium, and in Balkans, and in early Russia. They appeared in 6th-7th centuries, and had been very popular up to 13th century. Here Christ in a colobium (long garment) on Him stands upright, that being an iconographic peculiarity of these crosses. The Lord does not hang on the cross but stands before it with His hands spread out, as if He embraces the world, looking on it from above.

Thai image is deeply symbolic. Christ is shown as God the Almighty “trampling down death by death” and opening His arms to the world. His sufferings on the cross as a human being are not in any way reproduced in this image. They are indicated only with the Lord’s posture, and the cross behind Him.  That is the image of perfect triumph of Life over death, of Good over evil, of Light over dark… But in 10th century this image has been gradually substituted for another one, more realistic and customary for us, where Christ appears before us nailed to the Cross, with a sling on His hips. However in Orthodox tradition as opposed to Catholic one, the image of suffering Christ never came close to naturalism and death depiction. Ancient image of Easter joy, glory and Christ’s triumph over hell and death had always remained in it.

On the cross reverse we see the icon of praying Mother of God with Her hands lifted up in “orante” posture.

The Most Holy Mother of God in the Kingdom of Heaven is above all angels and archangels. She is entitled to solicit Her Divine Son for mercy for people. Therefore on the first icons already the Mother of God has been depicted in a devotional posture. The earliest of such images – “Orant” – has been met in catacombs of first Christians. The most famous of them is in the apse of the Cathedral of St. Sophia in Kiev (11th century). For its peculiar help and invincible protection against evil forces the image was named “Indestructible Wall”. The Orthodox Christians believe in that until the Mother of God hands are lifted up, the powers of darkness are unable to overcome the world and to override the mankind.

Icons of Christ, of the Mother of God, and of the saints are the shield and the sword protecting us against the effect of the powers of darkness. Cross is great and victorious weapon for our salvation, holy symbol of Christendom. Therefore the Church precept is to bear it perennially. “Neither for an hour, not for a single moment should we, Christians, leave it”, as St. Ephraem the Syrian (†373г.) says, “but carry it everywhere whatever doing. Whether sleeping or staying awake, or working, or eating, or drinking, or heading for, or sailing, or getting over river – should we embellish all our limbs with vivifying Cross”."