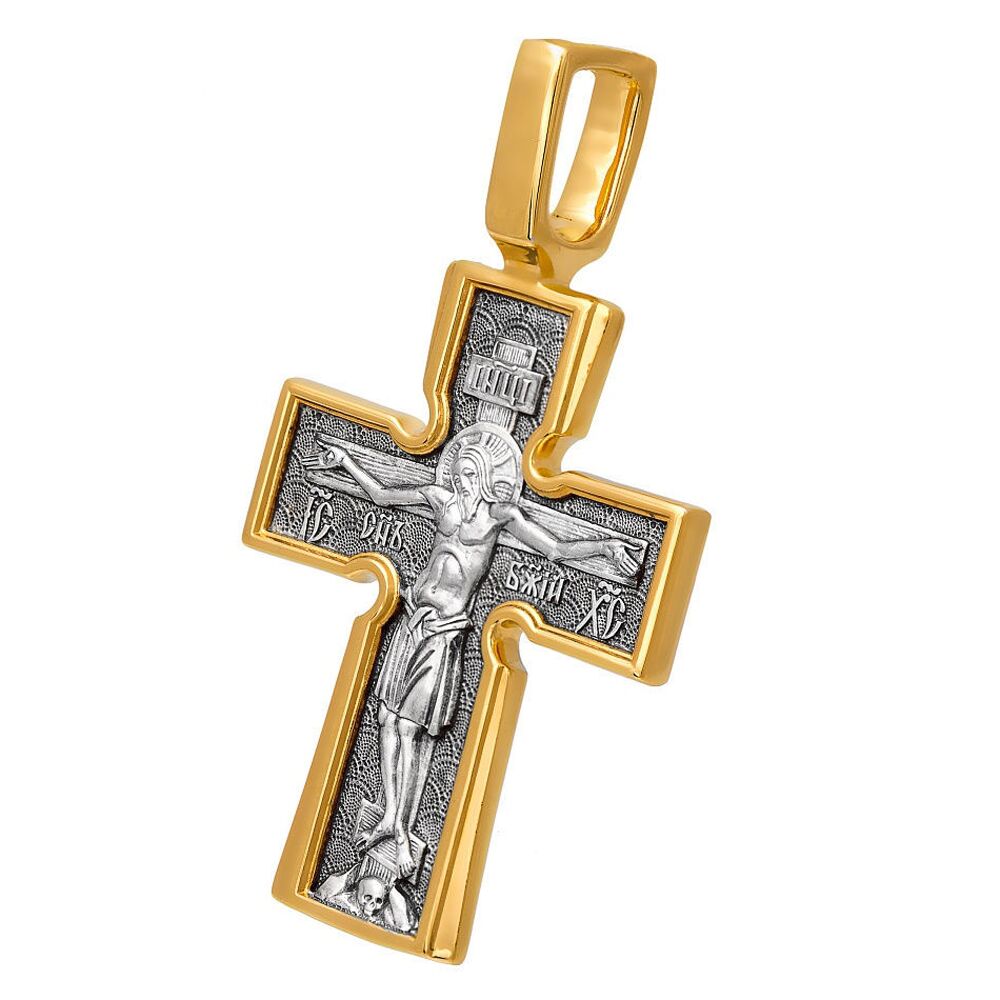 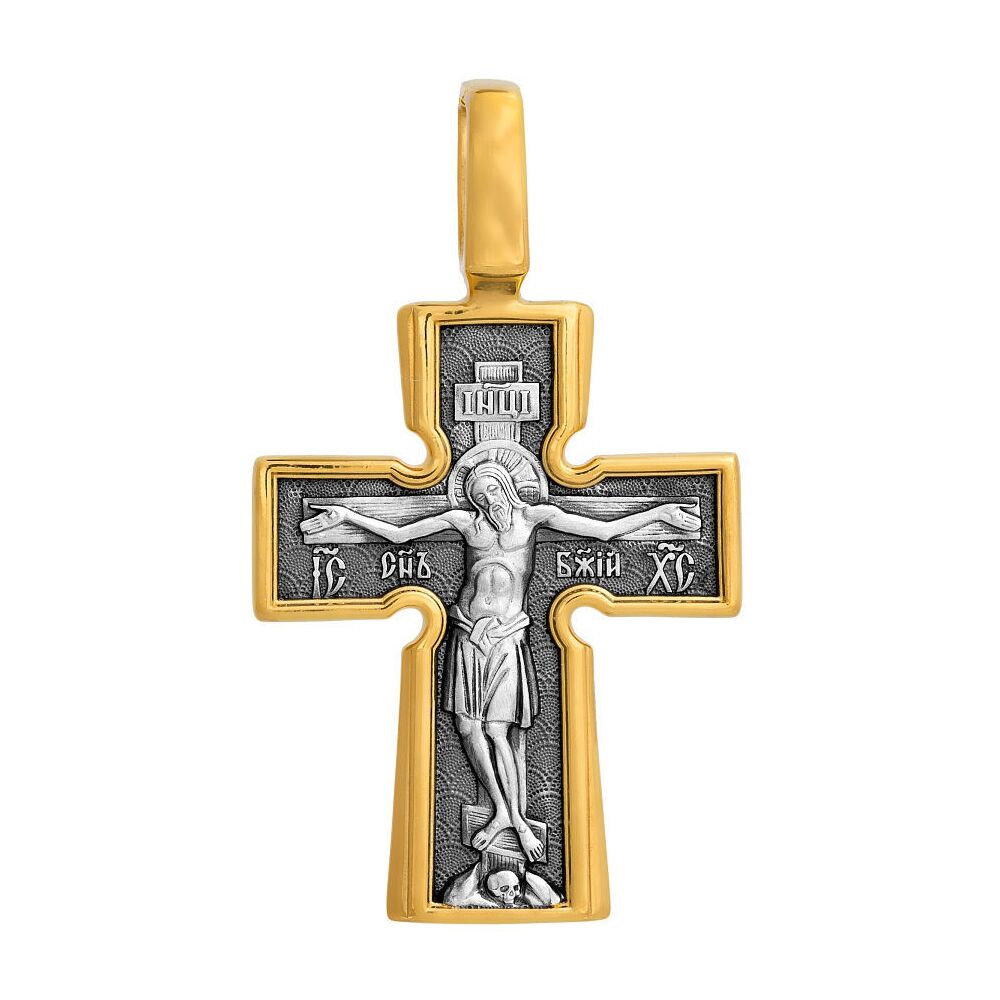 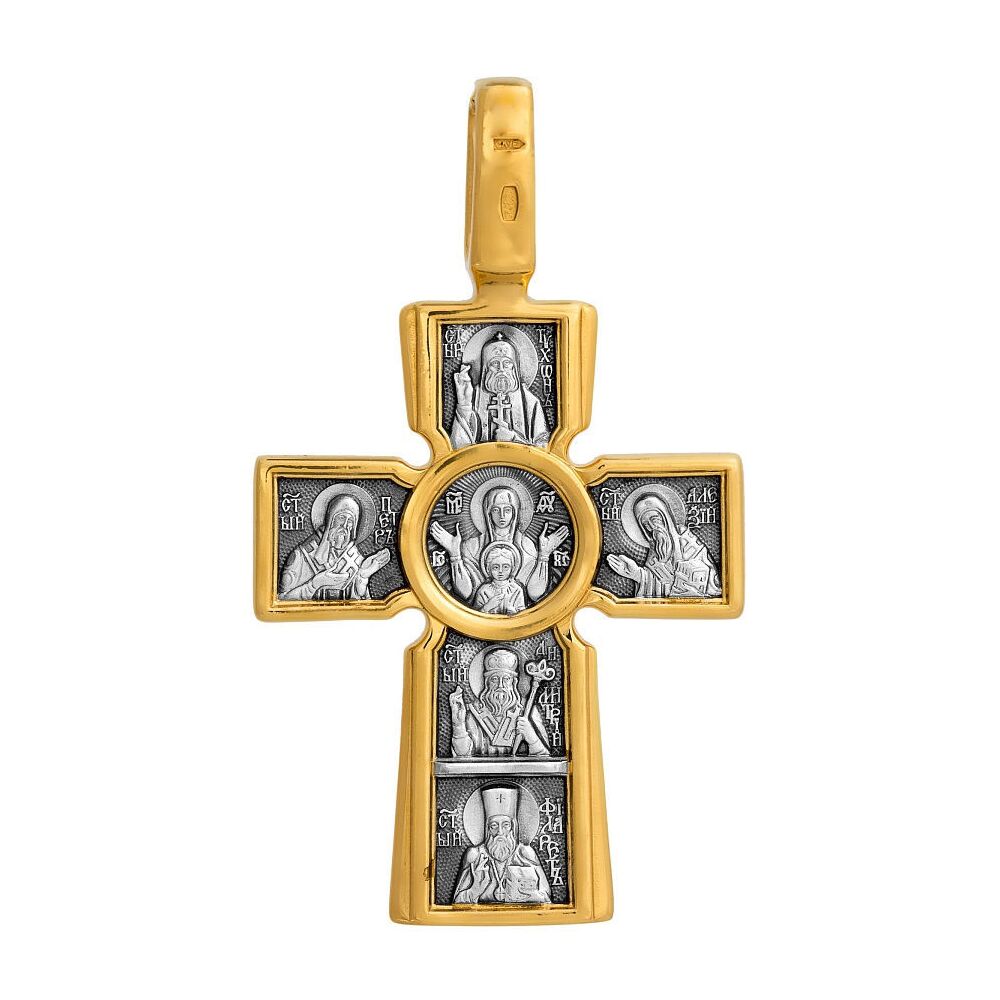 "Crucified Christ image on the cross obverse is imbued with paternal love. According to Orthodox tradition Christ on the cross is shown raised high above the earth, to repose freely upon the cross, and to extend his hands; as if embracing the entire Universe, and gazing lovingly at His creatures. This is the image of loving Heavenly Father and Saviour who is raised from the dead, trampling down death by death. He is invocatory for “all ends of the world” (Isaiah 45, 22).

The crucified Lord is always depicted on the eight-ended cross. Above His head there is a small crossbar with letters “INRI”, which means “Jesus the Nazarene, the King of the Jews”. According to Gospel this plate was nailed to the cross after the Crucifixion. By His sacrifice the Lord redeemed the original sin that has been separating mankind and God since Adam’s time, and smashed the death rule on the Earth. Adam’s skull is pictured in the cave at the cross foot as atonement symbol. The Lord was crucified near Jerusalem on Golgotha (skull, forehead, in Aramaic) hill whereat Adam had been buried by legend, and Christ’s blood trickled down washing his remains.

The Most Holy Mother of God and the saints are the helpers and intercessors for us in our life. On the reverse of the cross there are images of the Mother of God “Incarnation” as well as of five Holy Hierarchs. These images are inseparable spiritually. Dignity of a hierarch is a quite particular one. Those were the bishops who served Jesus Christ with the same self-sacrificing devotion, as the Mother of God did, and thus became like Him in their activities as pastors and illuminators.

Right above there is Tikhon (Belavin), the Holy Patriarch of Moscow and All Russia (January 19, 1865 — April 7, 1925). The Lord brought him to Patriarchal throne in the period of persecutions of Church, and made him the first Patriarch after interruption of three hundred years (the patriarchate was abolished by Peter I). He was persecuted on for years but kept on upholding Church interests and faith purity. He died in a hospital in unexplained circumstances. Commemorated is on April 7 (March 25), and October 9 (September 26).

On the left we side see the Metropolitan Peter. The saint lived in those days when the Russian Orthodox Church was subordinate to the Byzantine Patriarch, city of Vladimir being the Russian capital. Aged 12 he joined a cenobitic monastery, leaving for a hermitage when he became adult. There in seclusion he won great gifts of wonder making and love. After gaining the see of the Metropolitan of All Russia he ordered the seat to be removed to Moscow from Vladimir, having supported thereby the idea of unifying Russian lands around new capital. He deceased in 1326. Commemorated is on September 6 (August 24), October 18 (5), January 3 (December 21).

On the right side the Holy Mother of God is interceded with the Holy Hierarch Alexis, the Metropolitan of Moscow, and the nearest co-worker of St. Sergius of Radonezh; the teacher and the spiritual father of St. Demetrius Donskoy, the Great Prince. The Holy Hierarch became famous for his wisdom and wonders working. Healing of Taidula, the favorite wife of Janibek-khan is the most known one. It so happened that Taidula fell sick and grew blind, and khan required from the Holy Hierarch to heal her, since there remained no remedies. The Patriarch went to the Horde, officiated a service, and the wonder happened – the khan wife regained her sight. In that memory the Monastery of the Miracle (destroyed in 1929) was built in Moscow Kremlin. The Holy Hierarch is commemorated is on February 25 (12), June 2 (May 20), October 18 (5).

At the bottom of the cross there are icons of the Holy Hierarch Demetrius of Rostov (†1709), and of Filaret, the Metropolitan of Moscow (†1867). These saints are particularly famous for their literary heritage. The most sizeable and significant work by St. Demetrius is Menology. That is a multivolume set of Lives of Saints and of stories about wonder-making icons. The set is constructed in accordance to the Orthodox calendar, and remains so far the most complete and authoritative. But its main feature is the gracious personality of the saint himself, his God-inspired mind, which every line of the great work is suffused with. Commemorated is on October 4 (September 21), December 10 (November 28).

Russia owes St. Filaret (Drozdov) synodal translation of the Old and New Testaments into Russian. Enormous work of translating the Holy Scriptures was the cause of the entire of the saint. And only high spirituality, incessant praying, and surely being skilled at writing and having talent for languages allowed the Holy Hierarch to complete the work by the end of his long life. He is commemorated on December 2 (November 19)."