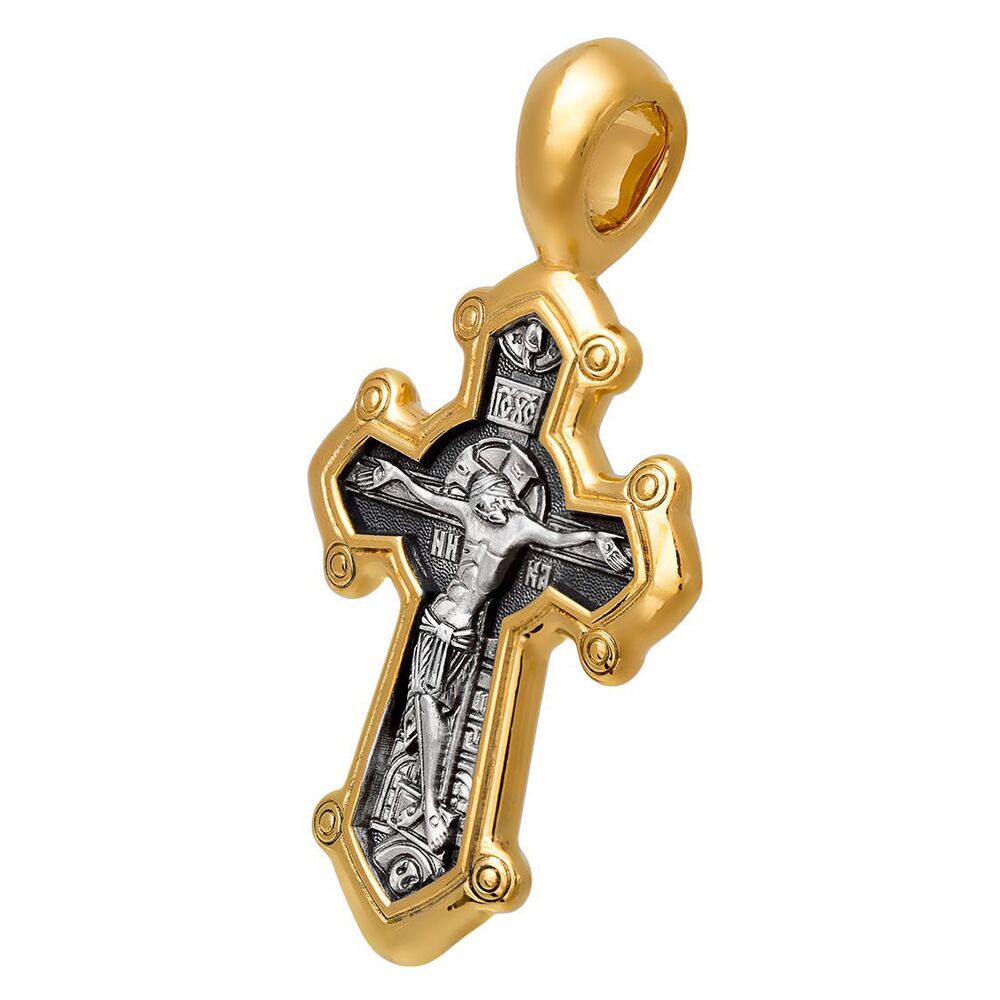 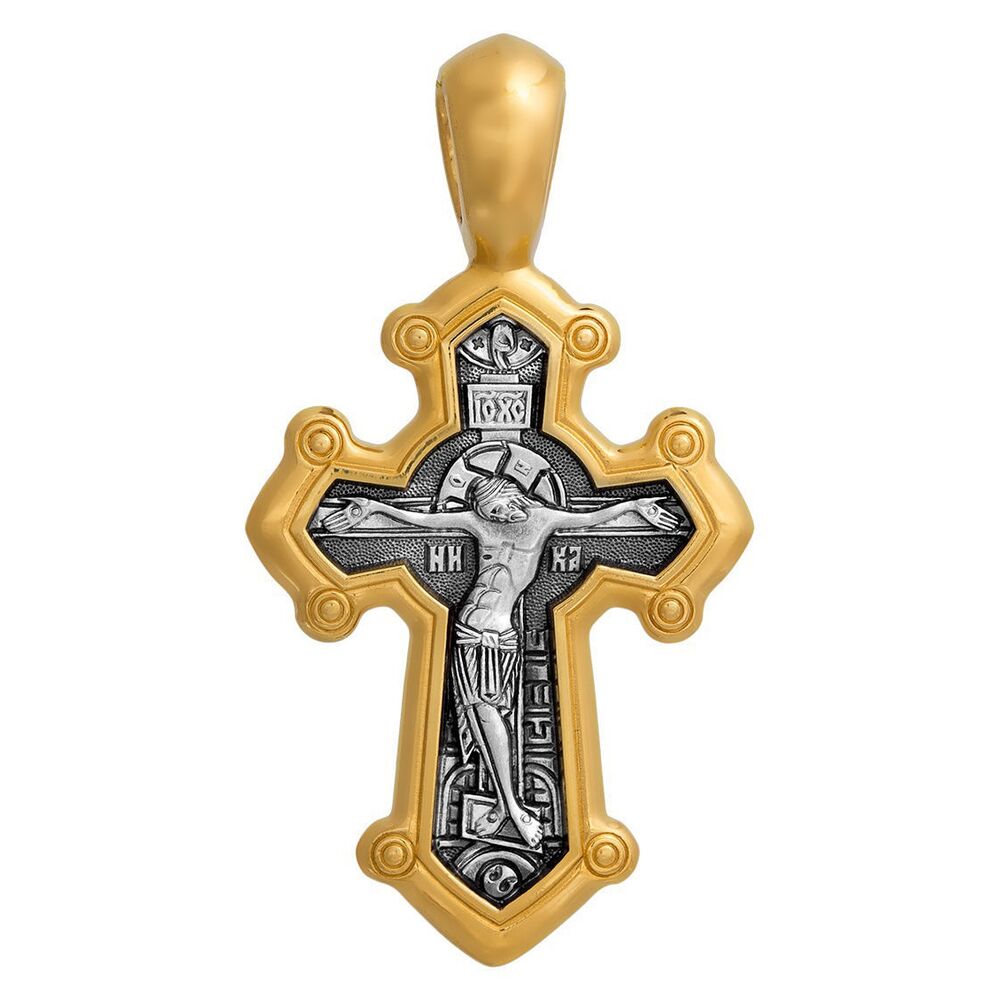 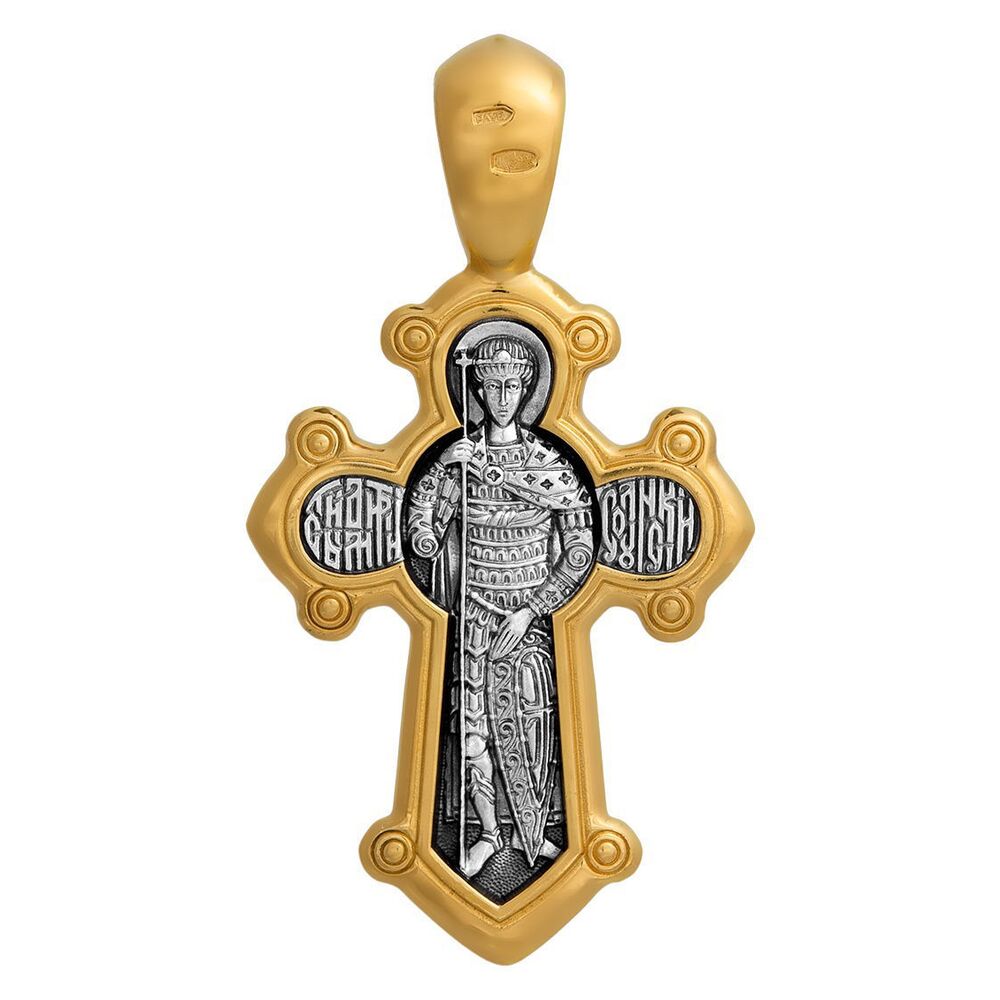 "This small сross having icons of Сrucifix and of St. and Glorius Demetrius of Thessalonica, the Great Martyr on its obverse is made according to traditions of Russian next-to-the skin crosses. In its artistry the main destination of such crosses is reflected — to be the sacral sign of the personal sacrament of baptism. Being christened the person is incarnated for the second time, spiritually. He is adopted by God, joins His Church and finds a hope for salvation and eternal existence, for the Lord said: “Except a man be born of water and of the Spirit, he cannot enter into the kingdom of God” (John. 3, 5).

Crucified Christ image on the cross obverse is imbued with paternal love. According to Orthodox tradition Christ on the cross is shown raised high above the earth, to repose freely upon the cross, and to extend his hands; as if embracing the entire Universe, and gazing lovingly at His creatures. This is the image of loving Heavenly Father and Saviour who is raised from the dead, trampling down death by death. He is invocatory for “all ends of the world” (Isaiah 45, 22). That is why “NICA” is scripted beside, which means “I overcame”. It was those words that the Lord applied to his disciples upon resurrection: «In the world you shall have distress: but have confidence, I have overcome the world» (John 16, 33).

Blessing Divine right hand is pictured over the Crucifix in heaven segment. It is sign of the Holy Trinity invisible presence at Golgotha, and of touch to the mystery of Divine Triunity. God appeared on the cross as making and concurrently being a sacrifice, blessing and simultaneously accepting it. By this sacrifice the Lord redeemed the original sin that has been separating mankind and God since Adam’s time, and smashed the death rule on the Earth. Adam’s skull is pictured in the cave at the cross foot as atonement symbol. The Lord was crucified near Jerusalem on Golgotha (skull, forehead, in Aramaic) hill whereat Adam had been buried by legend, and Christ’s blood trickled down washing his remains.

Due to purity and sanctity of their sacrifice martyrs become like the Lord Himself. Therefore these are their relics that are in Orthodoxy put into altar basement for consecration bloodless liturgical offering. On the reverse of this cross we see St. and Glorius Demetrius of Thessalonica, the Great Martyr, one of the most worshipped in Christendom. He was a proconsul of Greek city Thessalonica (Solun`). In 306 being an overt Christian himself he refused to carry out the Emperor order of Christians discovering and extermination, and was then imprisoned.  An angel appeared before him in dungeon and predicted being tormented to death. Soon the saint was thrust with pickets.

The great martyr is painted as a corslet with shield and lance. This is an image of Christ warrior who put on the whole armor of God for being able “to stand against the wiles of the devil” (Ephs. 6, 11). Truth serves as a belt for the Christ warrior, righteousness being his armor; and willingness to evangelize the world being his footwear. “Stand therefore, having the utility belt of truth buckled around your waist, and having put on the breastplate of righteousness, and having fitted your feet with the preparation of the Gospel of peace; above all, taking up the shield of faith, with which you will be able to quench all the fiery darts of the evil one. And take the helmet of salvation, and the sword of the Spirit, which is the word of God” (Ephs. 6, 14-17). On either side of the great martyr his holy name is scripted on the cross – “St. Demetrius of Thessalonica”.

In Russia on the nearest Saturday to November 8 – commemoration day of the saint – in all churches prayers are said for repose of warriors killed in actions for “belief and homeland”. This devout tradition was initiated in 1380 by St. Demetrius Donskoy after victory of Russian army over Golden Horde in the Field of Kulikovo.

According to Apostle Paul, each Christian is a warrior of invisible battle who has taken the weapon of God “to stand against the wiles of the devil” (Ephs. 6, 11), and to wage incessant   war against “principalities, against the powers, against the world's rulers of the darkness of this age, and against the spiritual hosts of wickedness in the heavenly places” (Ephs. 6, 12). The the Cross of Christ is his “great weapon” and his “double-edged sword” (Canon for Cross). Therefore the Church precept is of bearing it perennially. “Neither for an hour, not for a single moment should we, Christians, leave it”, as St. Ephraem the Syrian (†373г.) says, “but carry it everywhere whatever doing. Whether sleeping or staying awake, or working, or eating, or drinking, or heading for, or sailing, or getting over river – should we embellish all our limbs with vivifying Cross”."