Neck Cross Akimov 101.001 «The Vernicle Image of the Saviour. The Kazan icon of the Mother of God»

The Holy Fathers teach us to kiss our next-to-skin cross in the morning and in the evening with prayers for our nearest and dearest. It is sanctified protecting of our people that this shrine cross with holy patrons of family and marriage is designed for.

Shrine cross, or encolpion (in Greek) is a small reliquary. In ancient times they have often been cross-shaped and decorated with icons. This “domestic” shrine cross follows the tradition.

The family is our Church Minor. Wedlock is God’s institution; it is confirmed and blessed by the church sacramental; and it underlies all human life. The Apostle Paul compares the Christian marriage to a mysterious communication of Christ and Church, noting that “This mystery is great (Ephs. 5, 32). St. John Chrysostom tells: “the world consists of cities; cities consist of families; families consist of husband and wives. And when domestic disturbances start, cities will pervert, and then the entire world should be suffused with discords and wars”. Spiritual interpretation of human domesticity is the base of this shrine cross symbolism.

By its shape combining a cross, a square, and a circle the encolpion indicated unification of the earthly and the Heavenly things in human life. The square is an ancient symbol of the earth comprising four parts of the world and four elements. The circle is a symbol of Heaven and of Christ Himself Who is “an endless circle wherein all forces meet”. The Holy Fathers call an equilateral cross the image of Christ and the sign of His victory. They interpret it variously in spiritual sense. According to them the cross vertical line means sincere aspiration of a human soul for Heaven from the earth, the horizontal one indicating the earthly love for neighbors, for family. The true life of soul is in a harmony the earthly and Heavenly loves.

This harmony is impossible without our Lord Jesus Christ Who is the center of human spiritual life. Being its purport and goal He imbues and sanctifies it with His presence. He is also the Head of a Christian family as of the Church Minor. Therefore an icon of the Lord Almighty is in the cross center.

Being the Church Minor the family is a part of the Ecumenical Council, and unites in Christ with Church of the future. This perfect Heavenly Church is pictured as the saints interceding with the Lord Almighty. Such a composition (on the cross obverse) is called “deesis” where the Mother of God and John the Forerunner are always standing beside Christ in a pose of prayerful intercession.

Our first parents Adam and Eve, founders of any worldly family, are also part of the Heavenly Church. They stand below with their hands lifted up in prayer.

Above we see the prepared Throne (the Etimacia, in Greek). It is an image of the throne that Christ prepared for Himself by His sufferings, and whereon He will mount during His Second Advent.

The Most Holy Mother of God is the perfect image of Christ on the earth, His chief Helper. She is the Woman of prayer and Mediatrix for the world. It is She from Whom the Orthodox seek for help in organizing their worldly happiness. Therefore on the reverse there is an icon of Her whereon She is pictured praying for the world and stretching Her Protecting Veil over it.

The icons of Holy patrons of family and marriage surround the Mother of God. At the top there is the Archangel Gabriel, God’s messenger. It was he whom God sent to St. Zechariah for announcing of his great son John the Forerunner being born. He also was to announce the best tidings to the Virgin Mary about coming Nativity of Jesus Christ, the Savior.

At the cross foot we see the icon of Sts. Samonas and Gurias the Confessor-Martyrs († about 299–306), brothers from the city of Edessa; and of St. Abibas († 322). The peculiar ministry of those saints has been revealed in their posthumous wonders. They have become “punishers for non-compliance with mutual terms”. They saved a woman named Euphemia whom the husband buried alive; and that was their first wonder. The saints are commemorated on November 28.

To the right and to the left of the Most Holy Mother of God there are images of Sts. Adrian and Natalia, the Martyrs († 305–311) (commemorated are on September 8); and of Sts. Peter and Febronia of Murom († 1228) (commemorated are on July 8). These saints have preserved the sanctity of wedlock both in there lives, and in their deaths; and have set an example for Christian families, and become the Heavenly Patrons thereof.

Inside the shrine cross there is a pray glorifying God as the regulator of human worldly life: “O Lord our God, blessed are You being the Performer of the sacrament of mysterious and pure matrimony; and the bodily law Giver; and the Custodian of incorruption; and the Organizer of earthly blessings”. 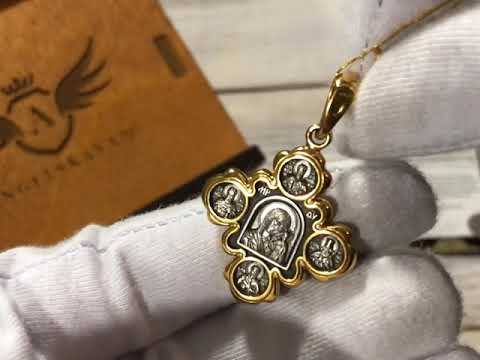