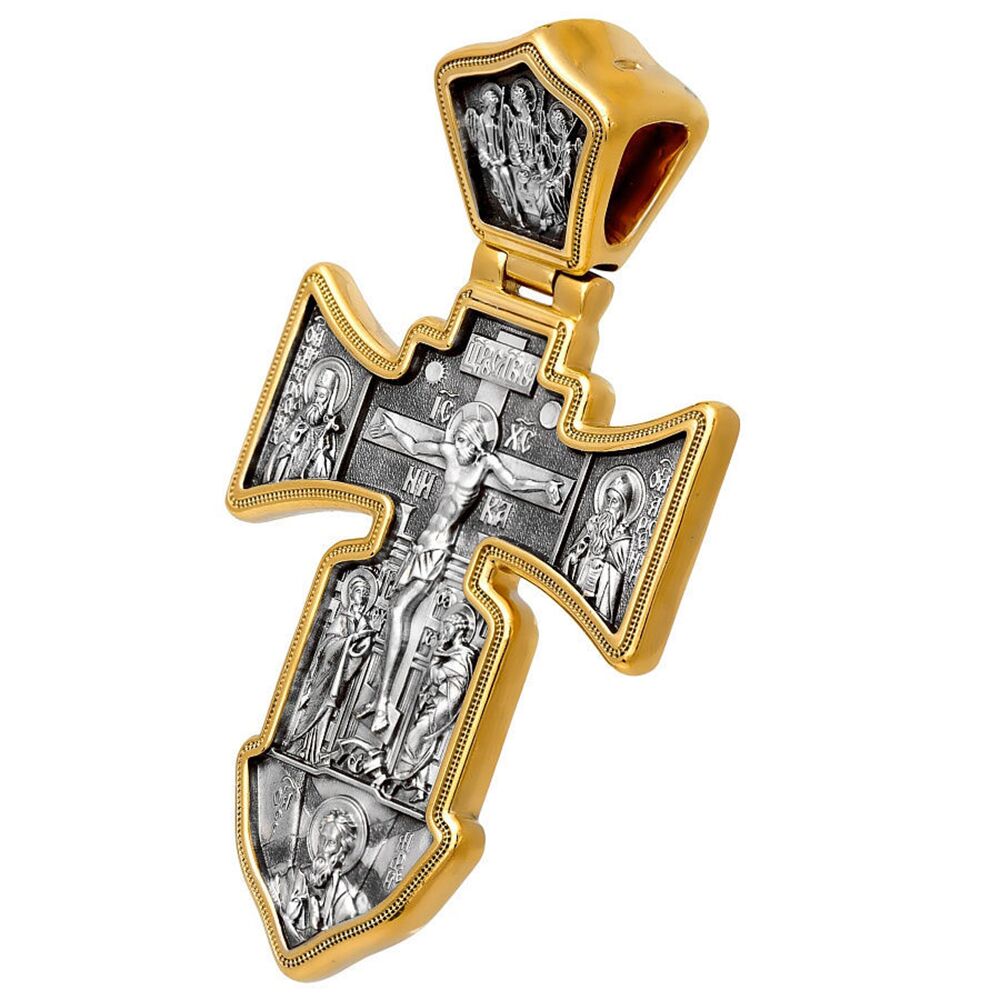 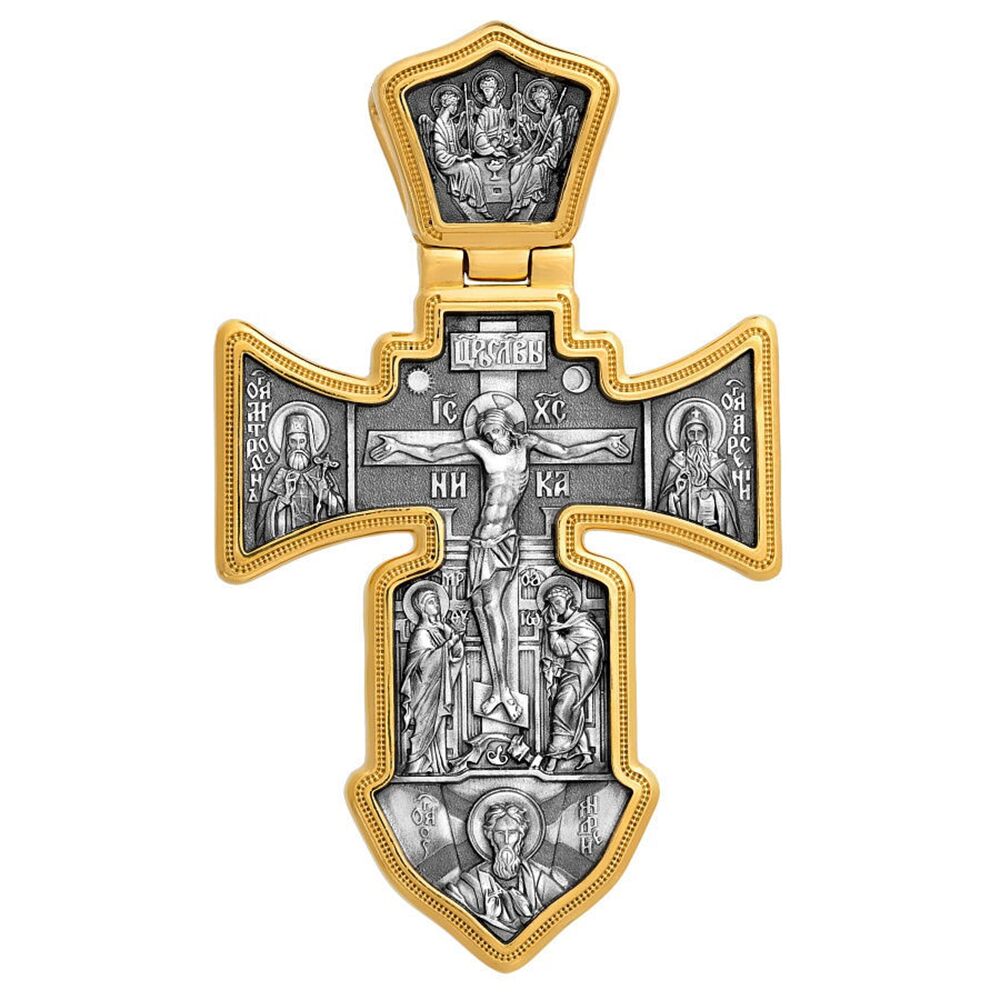 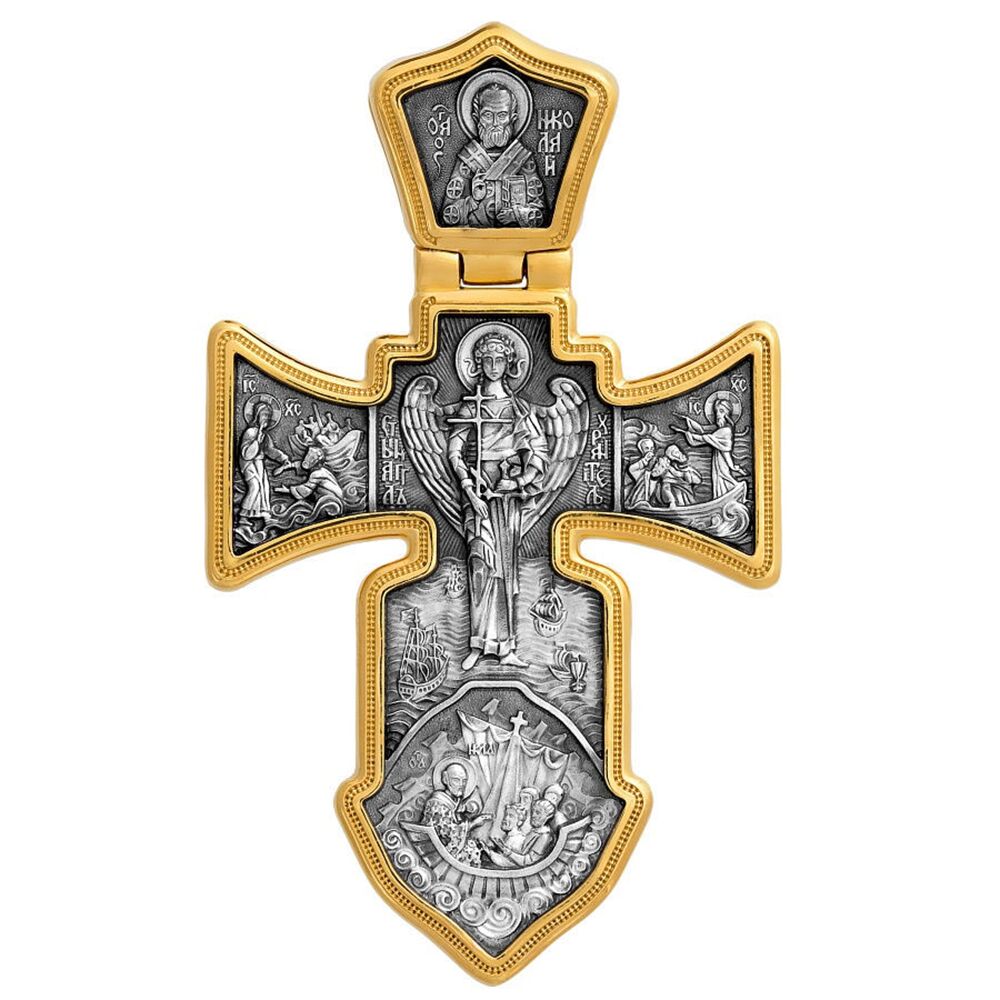 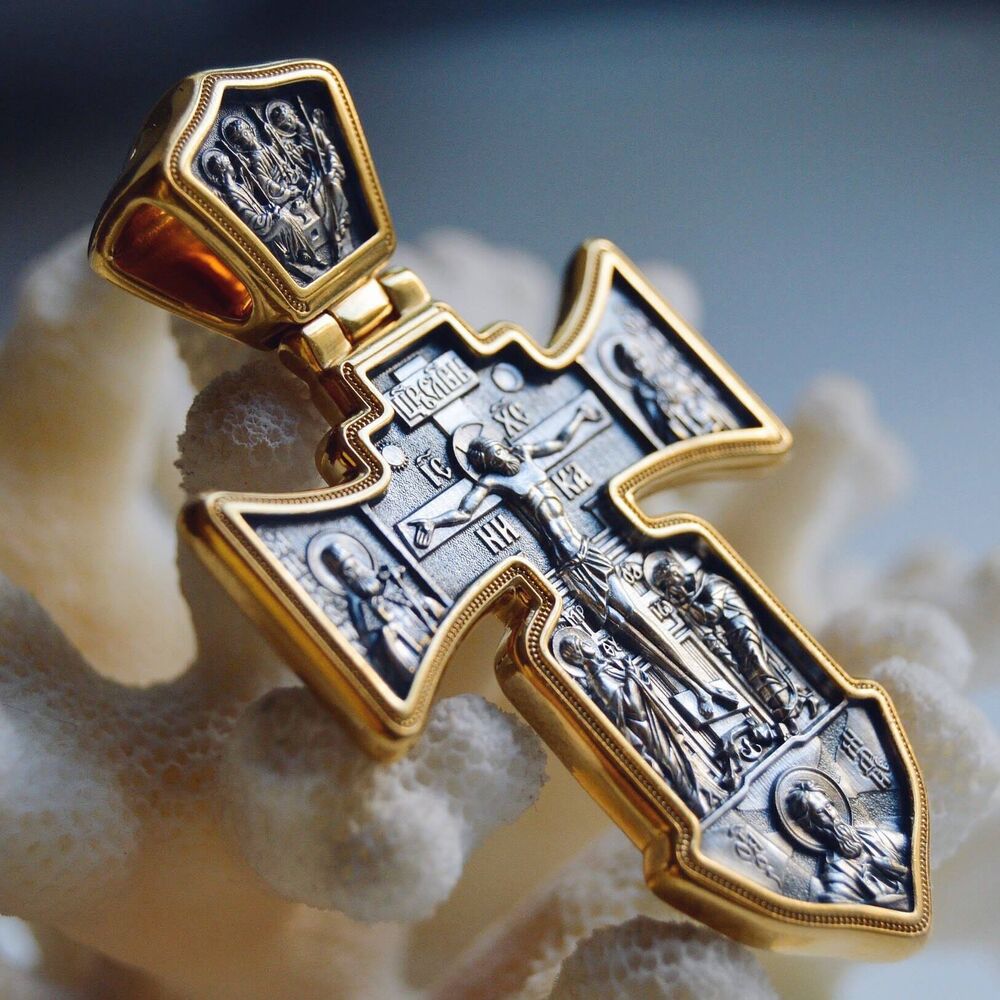 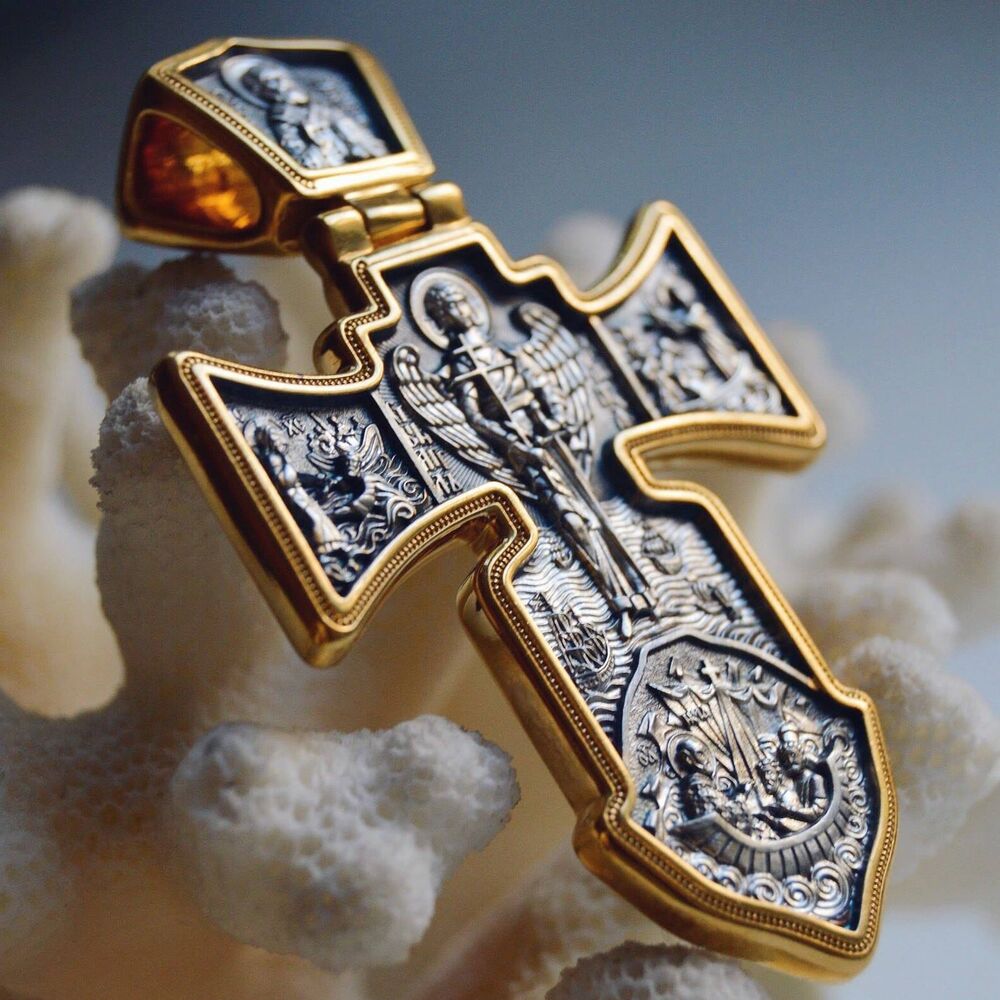 "The cross is devoted to Saint-Petersburg. It is made in traditions of Russian iconographic crosses whereon the Saviour image is supplemented by bossed icons of the Mother of God, angels, Apostles, and the saints. Usually these were of the most hallowed icons and the local saints of the production places. On the obverse we see The Vernicle (not-made–by-hands) Image of the Saviour with Sts. Peter; Andrew, the ""First-called"", the Apostles; and St. Tikhon of Zadonsk. On the reverse there are The Kazan icon of the Mother of God; St. Alexander Nevski; St. Ignatius Bryanchaninov; St. John of Kronstadt; and St. Xenia of Petersburg.

The Vernicle Image of the Saviour had been hallowed very much in Russian capital. Its wonder making copy painted by well-known Russian icon-painter, and owned by Peter I was here in St Isaac`c Cathedral. The holy altar tables of the Winter Palace and of chief state institutions were devoted to the Vernicle Image of the Saviour. In Christendom the image of Christ on the Vernicle was the object the greatest of worship. According to the Legend the Lord wiped His face with a towel whereon that image imprinted.

Above the icon of the Vernicle Image of the Saviour we see the Prepared Throne (the Etimacia, in Greek). That is the image of the Throne, which Christ prepared for Him be His sufferings and on which He would sit at the Second Advent for the Dread Judgment.

Holy patrons of Saint-Petersburg intercede with around the Saviour image in circles – signs of heaven and eternity. In lower part we see the image of St. Tikhon of Zadonsk. From 1761 till 1763 he was the Suffragan Bishop of Kœksholm and Ladoga, and for long periods lived in Saint-Petersburg at the court of Queen Elisabeth (daughter of Peter I) as her pastor and spiritual guide.

In the days of mass neglect of the Beatitudes, the Holy Hierarch Tikhon showed the perfect example of love, meekness, non-Possessing, and wisdom nourished not by mental pride, but by pure, lucid godly thoughts.

There on each side of Christ are icons of Apostle Peter (whose name Saint-Petersburg is named after); and of Andrew, the ""First-called"" (who according to the Legend reached the banks of Neva). The X-shaped cross whereon St. Andrew has been crucified is the symbol of Russian fleet.

In Russia they loved to devote reverse of next-to-skin crosses to the Mother of God. At Saint-Petersburg cross it is the Kazan icon of the Mother of God – the most worshipped one in our city. For the most wonder making copy of it the Kazan Cathedral was built for it as a majestic reliquary.

Below there is the image of St. Xenia of Petersburg. Xenia chose a very hard way of a consecrated life – behaving like a ""folly for Christ's sake"", and the Lord endowed her with extraordinary power of wonder-working. The grave of the saint as well as her images are hitherto inexhaustible source of wonders.

To the right of the Mother of God we see the icon of one more Petersburg great wonder maker – St. John of Kronstadt holding a cross and the Liturgical Vial in his hands. “All-Russian father (batiushka)”, as he was called in his lifetime, showed a new image of consecrated life – selfless devotion and ascesis not within monastery walls but in the world, in the thick of things of a huge city where he engaged in prayerful and apostolic services for the sake of redeeming millions of people.

To the left of the Mother of God there is the image of St. Ignatius Bryanchaninov, the founder of the Hermitage Monastery of the Trinity and St. Sergius. In the first half of 19th century he revived patristic theologics, leaving numerous volumes of doctrinal and ascetic works.

The Petersburg cross has a quatrefoil shape formed by a square with rounded corners and a rhomb whereon superposed. The rhomb corners are supplemented with lilies, symbols of purity and saintliness. In Russia the old quatrefoil shape has been used for making next-to-skin crosses (primarily of reliquaries) since 14th century. It increases and supplements the symbolic perception of equilateral cross as of the image of transfigured creation. In quatrefoil shape the square – the sign of ground – is intersected by a rhomb that signifies the Divine Glory and the Heavenly Jerusalem, thus creating an impressive image of combination of earthly and eternal being."