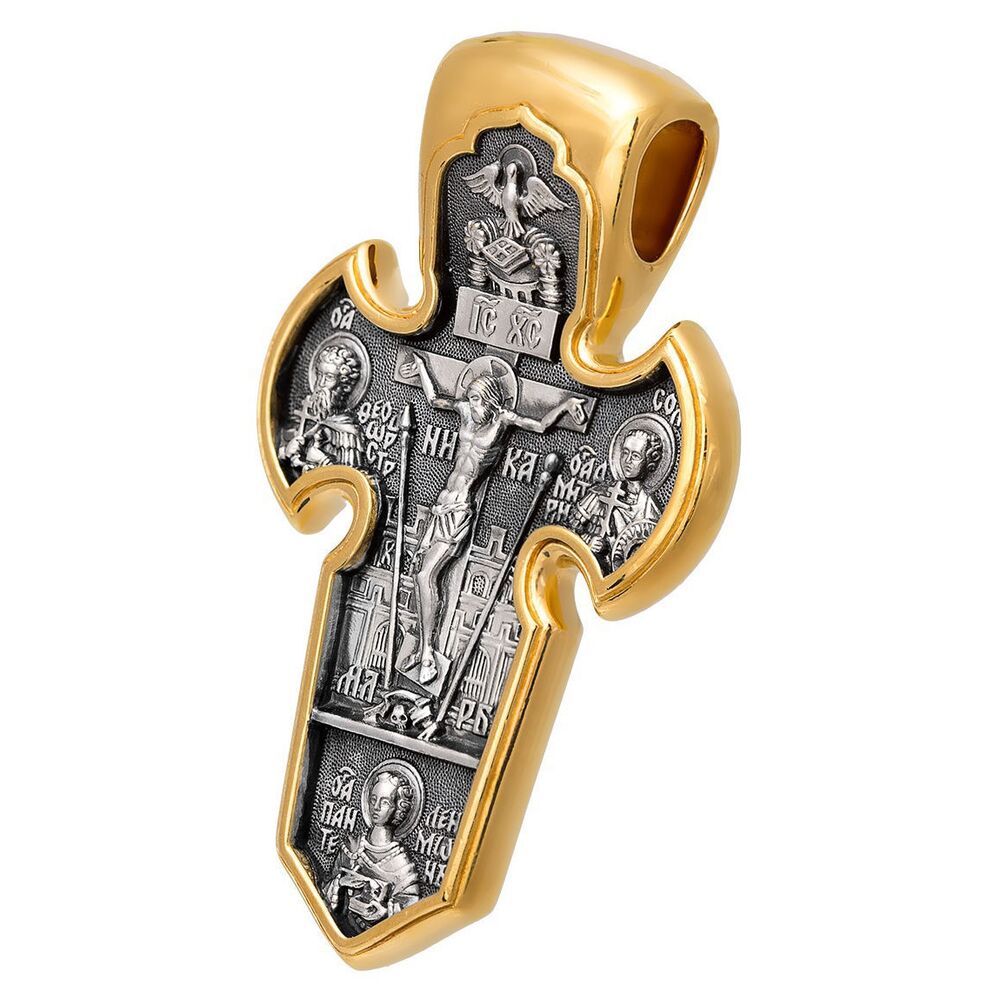 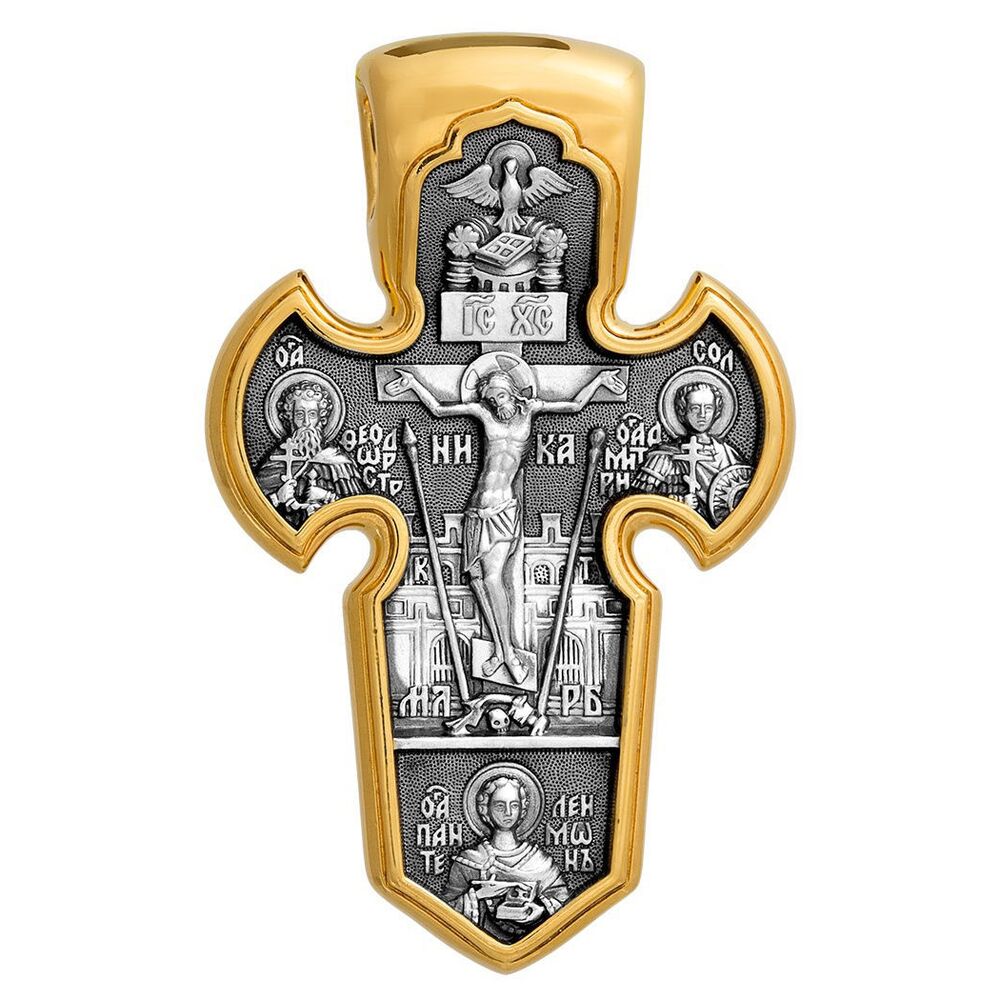 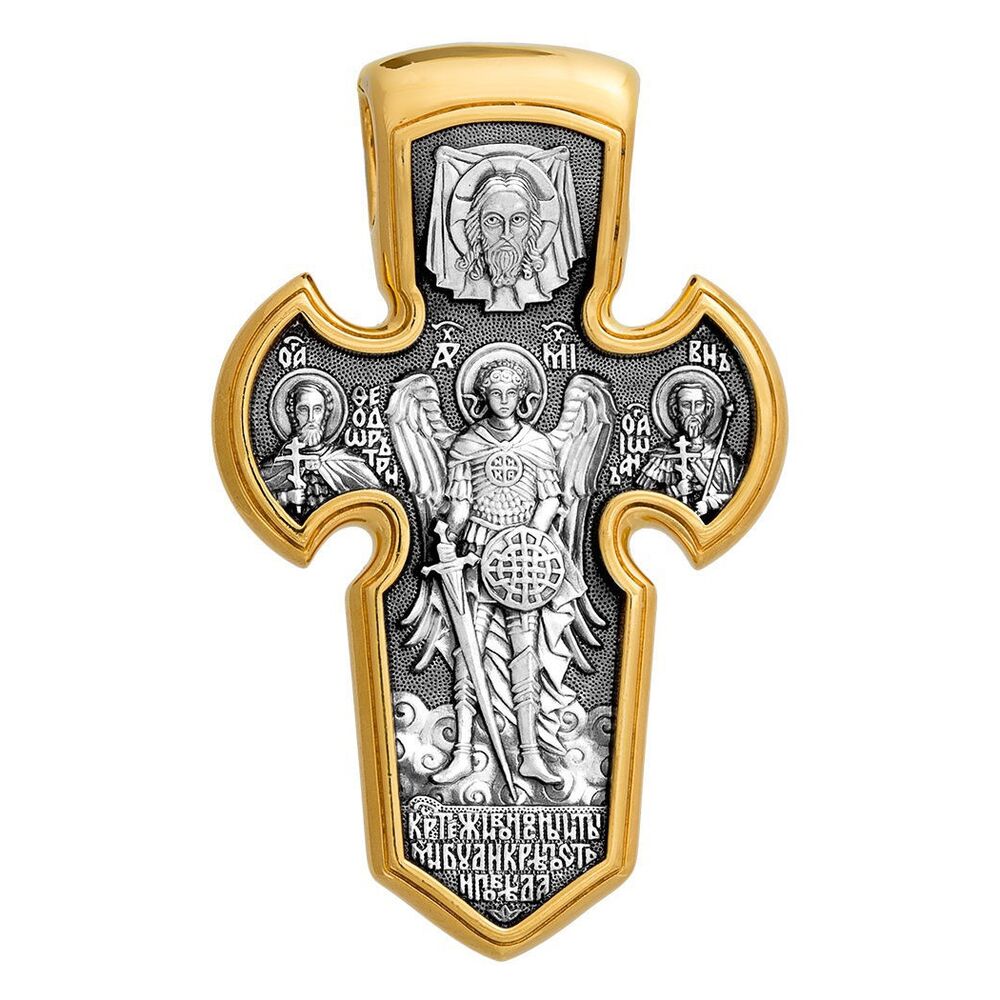 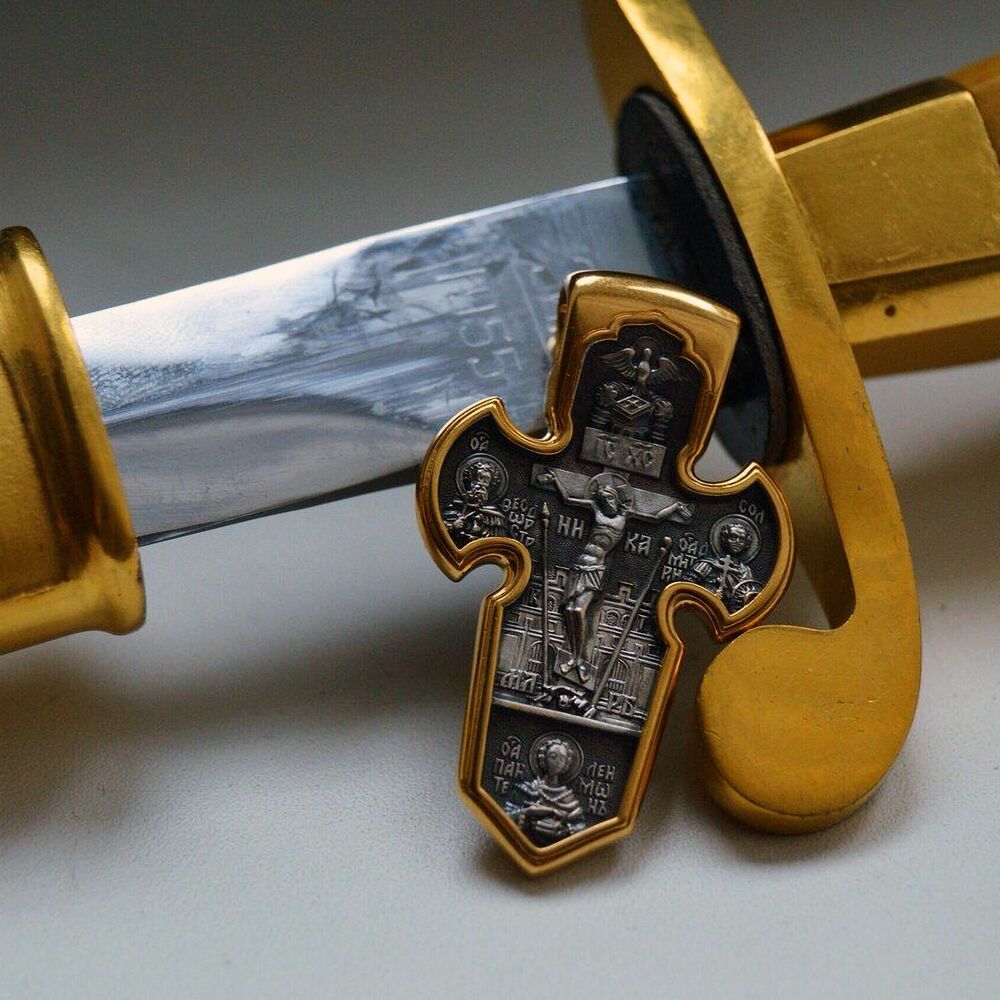 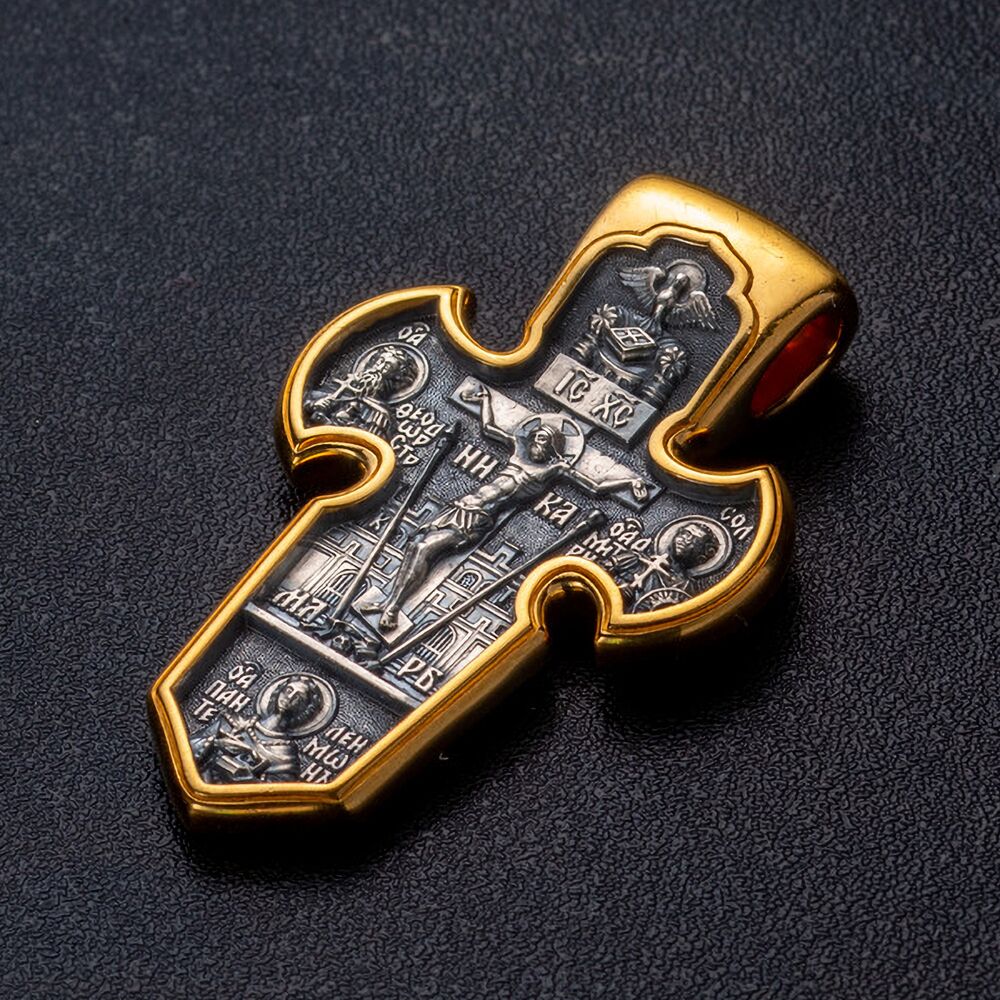 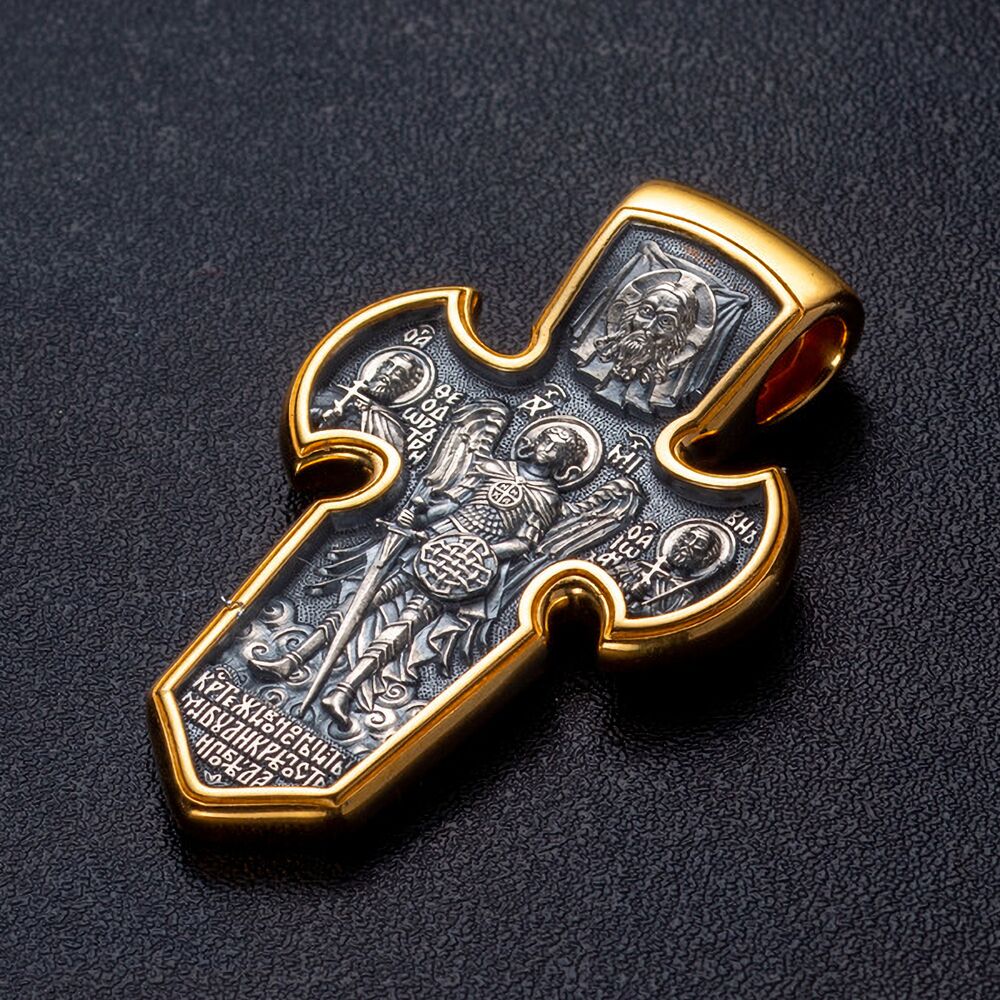 "This cross is made as a glory image of the Church Militant waging war against “the world's rulers of the darkness of this age, and against the spiritual hosts of wickedness in the heavenly places” (Eph. 6, 12).

According to the Apostle Paul each Christian is a warrior of invisible battle who takes Divine weapon in order “to stand against the wiles of the devil”.(Eph. 6, 11). “Stand therefore, having the utility belt of truth buckled around your waist, and having put on the breastplate of righteousness, and having fitted your feet with the preparation of the Gospel of peace; above all, taking up the shield of faith, with which you will be able to quench all the fiery darts of the evil one. And take the helmet of salvation, and the sword of the Spirit, which is the word of God” (Eph. 6, 14–17).

For Russians military valour and heroic deed had always been a visible image of spiritual battle, since “Greater love than this no man hath, that a man lay down his life for his friends” (John 15, 13). Warriors-martyrs were loved and worshipped in Russia, who combined feat of arms and act of faith. Four of such ones are depicted on the cross. On its obverse we see Sts. Theodore Stratelates and Demetrius of Thessalonica, St. Theodore Tyron and St. John being on the reverse.

The cross itself has a shape of sword that has been a symbol of spiritual struggle since Bible days. Angels and Apostle Peter appear the Scriptures with swords in their arms (John 18, 10). The Lord himself tells: “Do not think that I came to send peace upon earth: I came not to send peace, but the sword. (Matt. 10, 34). In Russia sword was traditionally identified with cross, being frequently used instead. Multitude of icons remained whereon the holy warriors-martyrs hold the sword with handle upwards instead of martyr cross. Widely worshipped is the icon “Nicola of Mozhai” whereon the saint holds a naked sword.

The crucifix is the center of the soldier cross. On either side of Christ shown are the Passion implements: lance and stick with sponge. Jerusalem wall is behind, which means that the Lord was crucified outside the town. But at the same time the wall signifies the Heavenly Jerusalem, the way to which was cleared for the mankind through Golgotha: “МЛРБ – Let be Elysium on the execution place”, is written at its foot.

Under the cross Adam’s skull stands. A legend exists that the Lord’s blood trickled down from his cross just on it. And it is quite providentially that Adam’s head appeared on Golgotha (Calvary is Latin version of this Aramaic word, meaning “head, skull, forehead”) as a testimony of Adam being purged from original sin through Christ’s blood and regaining lost Eden. The crucifix combines Adam’s skull with Etymasia – image of Throne that Christ prepared for himself through his suffering to occupy whereupon at His Second Advent for Last Judgment. “…for I came not to judge the world, says the Lord, but to save the world”. (John 12, 47).

In the lower part of the cross there is the sacred image of Panteleimon, the Great Martyr and the healer decapitated in 305. He is venerated by warriors not only for salving, but for a great help on the battlefield as well.

At the cross reverse there stands a stately figure of Archangel Michael (commemorated on November 21), the Archistratigus, i.e. high commander of Heavenly host. The name of him means “Who is like God?”, since he is the most mighty and redoubtable enemy of evil. He was the first to assail Lucifer who revolted against God, to subvert him down from Heaven and never to cease battling with evil hosts thereof. Ribbons twine around the Archangel Head, to symbolize his keen ear and eye to God.

In medieval Russia princes and warriors aspired to the Heavenly Voevode auspices and decorated their helmets with his winged figure.

In the upper part of the cross the Saviour Not-Made-by-Hands is located as a martial banner for invisible battle. Christ’s image on the towel had always been a supreme sacred thing of Christendom. By the legend it was miraculously imprinted on the towel, with which the Saviour wiped His face after ablution. In 944 the Saint Towel was brought into Constantinople and kept in the special shrine in the Temple of Pharos wherefrom disappeared in 1204 when Constantinople was looted by crusaders.

On both sides of The Archistratigus Michael two more warriors of Christ’s retinue intercede with – St.Theodor Tyron, Great Martyr (recruit, in Greek) (commemorated on March 2) who suffered for his faith in city Anasia; and St. John the Soldier, Martyr (commemorated on August 12) excruciated under Juliane Apostate in IV century. At the Cross heel there is prayerful appeal from Canon by St. Gregory, the Sinaite: “O, thy, Lifebringing Cross, would you be fortitude and overcoming for me”. That is the prayer of a warrior arising against evil with Charity for his neighbor, Faith in God and Hope of immutable help of His host of Heaven."