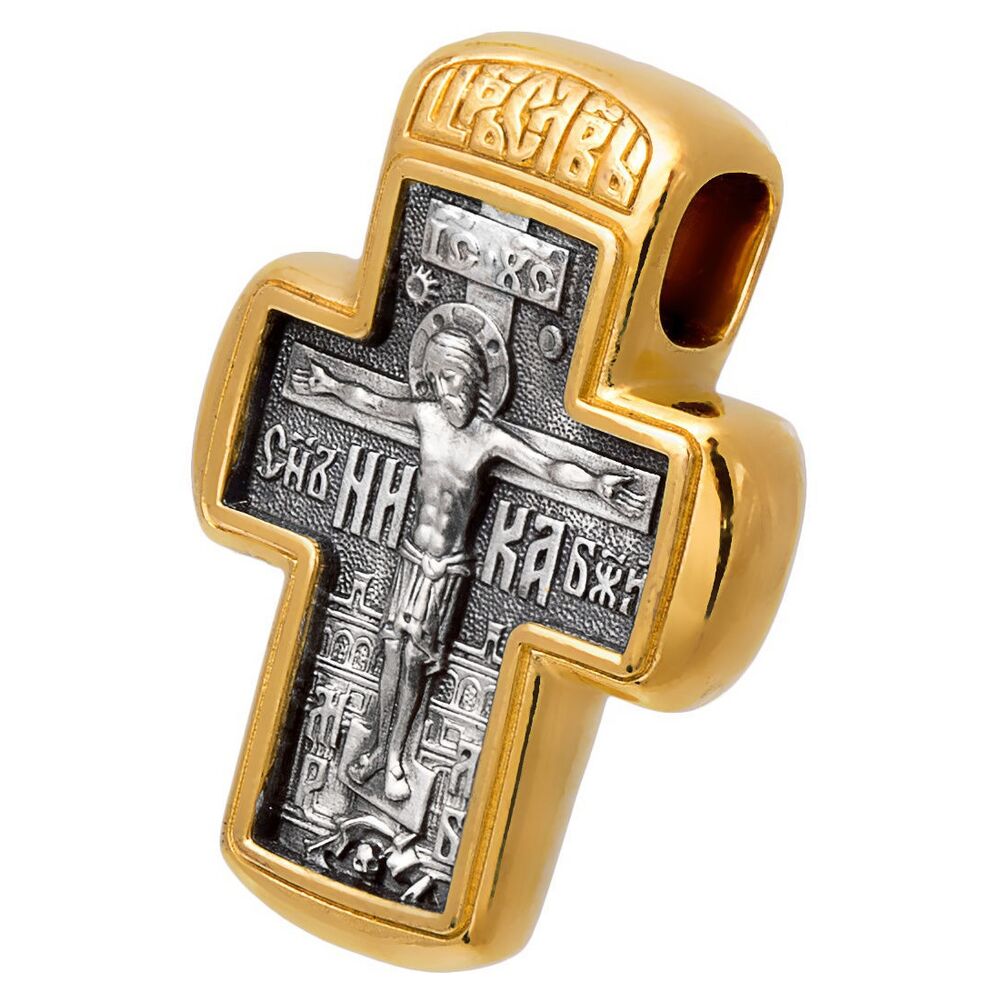 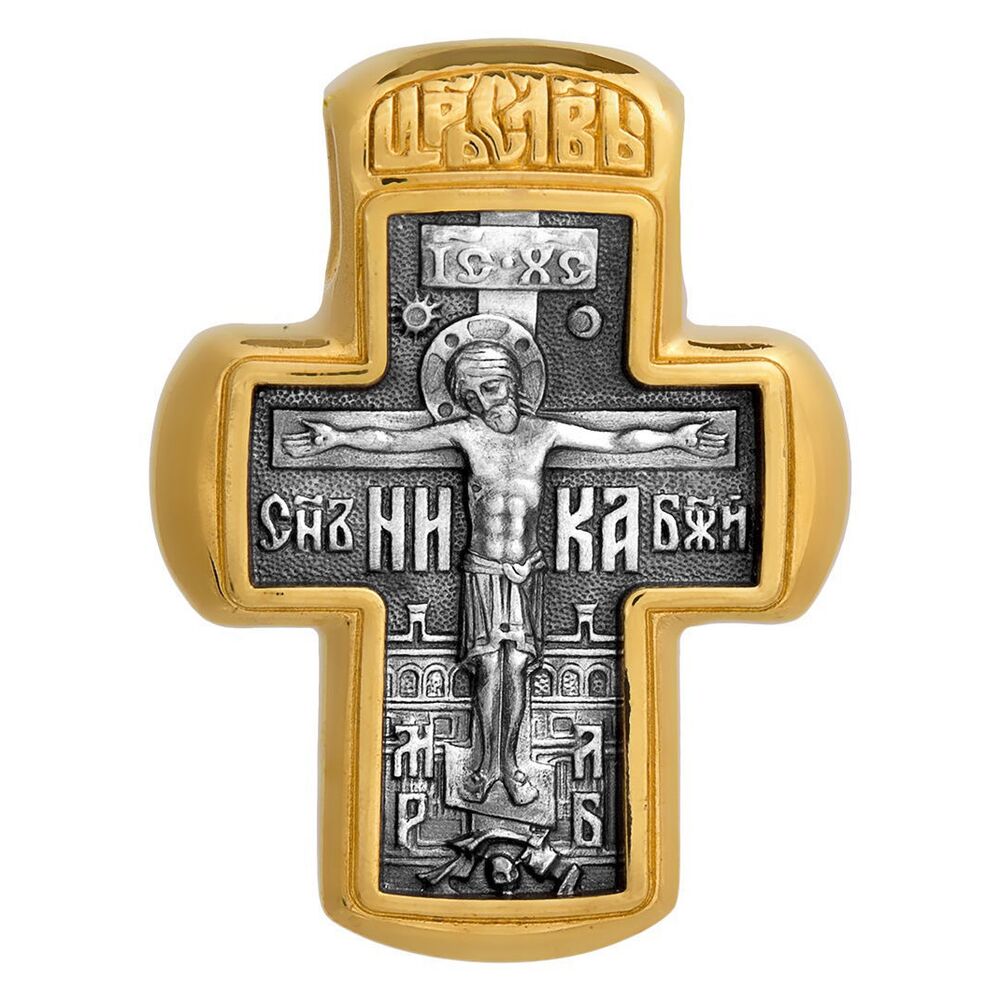 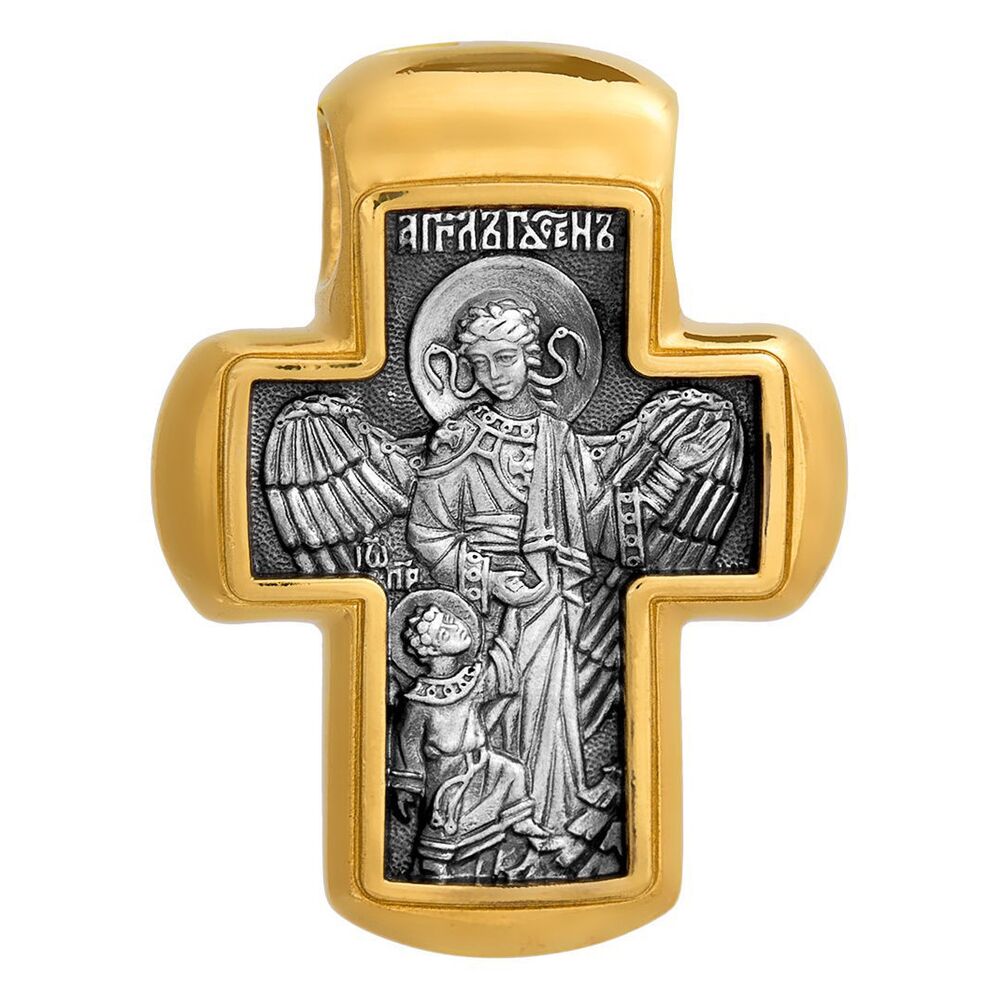 "A small cross with the Crucifix on its obverse and with Angel and the child John the Baptist on the reverse is made in traditions of Russian Next-to-the-Skin Crosses.

At cross obverses mostly Crucifix is depicted, since Jesus Christ turned His sufferings into the symbol of victory over sin and death. “NICA” is scripted beside the cross, which means “I overcame”. Upon resurrection the Lord applied to His disciples with those words: «In the world you shall have distress: but have confidence, I have overcome the world» (John 16, 33).

The Lord was crucified on the hill of Golgotha (""head, skull, forehead"" in Aramaic) that was outside of the town. The Jerusalem wall is usually depicted in token thereof. Together with it the wall symbolizes the Heavenly Jerusalem, the way that opened up before the mankind through Golgotha.The skull of Adam rests at the cross foot. A legend exists that the Lord's blood trickled down just to it from the cross. ""The head of Adam"" is a symbolic evidence of human absolution from original sin due to through the blood of Christ, and human finding of lost Paradise.

At the foot the cross Adam’s skull rests. A legend exists that the Lord’s blood trickled down from his cross just on it. And it is quite providentially that Adam’s head appeared on Golgotha (Calvary is Latin version of this Aramaic word, meaning “head, skull, forehead”) as a testimony of Adam being purged from original sin through Christ’s blood and regaining lost Eden. The crucifix combines Adam’s skull with Etymasia – image of Throne that Christ prepared for himself through his suffering to occupy whereupon at His Second Advent for Last Judgment. “…for I came not to judge the world, says the Lord, but to save the world”. (John 12, 47).

In Orthodoxy venerated are crosses of various shapes. Two of them are used in this one - four-ended and eight-ended. As the Gospel says, it was the four-ended cross that the Lord brought to the Place of Execution. But after Crucifying the heel and the board were nailed down with inscription: “JNRJ – Jesus Nazarethan, Rex Judaic”.

The shape and all the parts of the Cross are symbolical. The basic crossbar having width and length signifies the temporal, the vertical pointing out the nether world and Heavens, as well as aspiration of the earth up to the divine. The cross upper part symbolizes the area of Divine existence to be as if separated with a short upper bar. That is why above Christ short title “IС ХС” additional “King of Glory” is written. The inclined crossbar means the scale for human deeds measuring. Christ was crucified between two robbers. One of them reviled against God and the scale bent down of his wickedness burden as if sending him to hell.  The other repented of his sins and supplicated for divine mercy. And for him the scale showed the way to the Heavenly Kingdom.

“Just as the cross four edges are being held and united by its centre, so held are by the power of God the height and the depth, the longitude and the latitude, that is, all visible and invisible creation” – wrote St. John of Damascus, the great theologian and ascetic (8th century). This means that in each cross there are mystic images of the Lord and his Glory Realm as well as the image of the mundane transfigured by sanctity, in order that it «may be strengthened to comprehend with all the saints what is the breadth and length and height and depth» (Eph. 3, 18).

On the cross reverse there are the Divine Angel and John the Baptist in his infancy. John was the last prophet of Israel. He urged to general penance prognosticating the Heavenly Kingdom approach and was honored with the Lord baptizing. Christ tells of him: “This is he of whom it is written: Behold I send my angel before thy face, who shall prepare thy way before thee"" (Luke 7, 27), and: “Amongst those that are born of men, there is not a greater prophet than John the Baptist. But he that is the lesser in the kingdom of God is greater than he” (Luke 7, 28).

In Byzantine tradition infant John was sometimes depicted to be Angel guided, as since the very infancy he had been following the angelic way and being filled with sanctity became like angel. Christ’s Precursor and Baptist, John was the son of Elisabeth, Virgin’s cousin and was half a year older than Christ. After Annunciation and the Immaculate Conception Our Lady set off for Elisabeth. Unborn yet, John became aware of the Lord coming and stirred and “leaped” in his mother’s womb. So he was called upon to become Christ forerunner and having deceased stood before the Lord together with the Mother of God.

The Guardian Angel is given to everyone in christening and leads him (her) along the path of the righteous from little up. If you are able to hear him; if you comply with the voice of conscience you will be able to achieve top sanctity like John, the Lord Baptizer. So the symbolic program of this small cross meets the evangelic words of the Lord: “If any man would come after me, - the Lord said, - let him deny himself, and take up his cross, and follow me”. (Marc 8, 34).