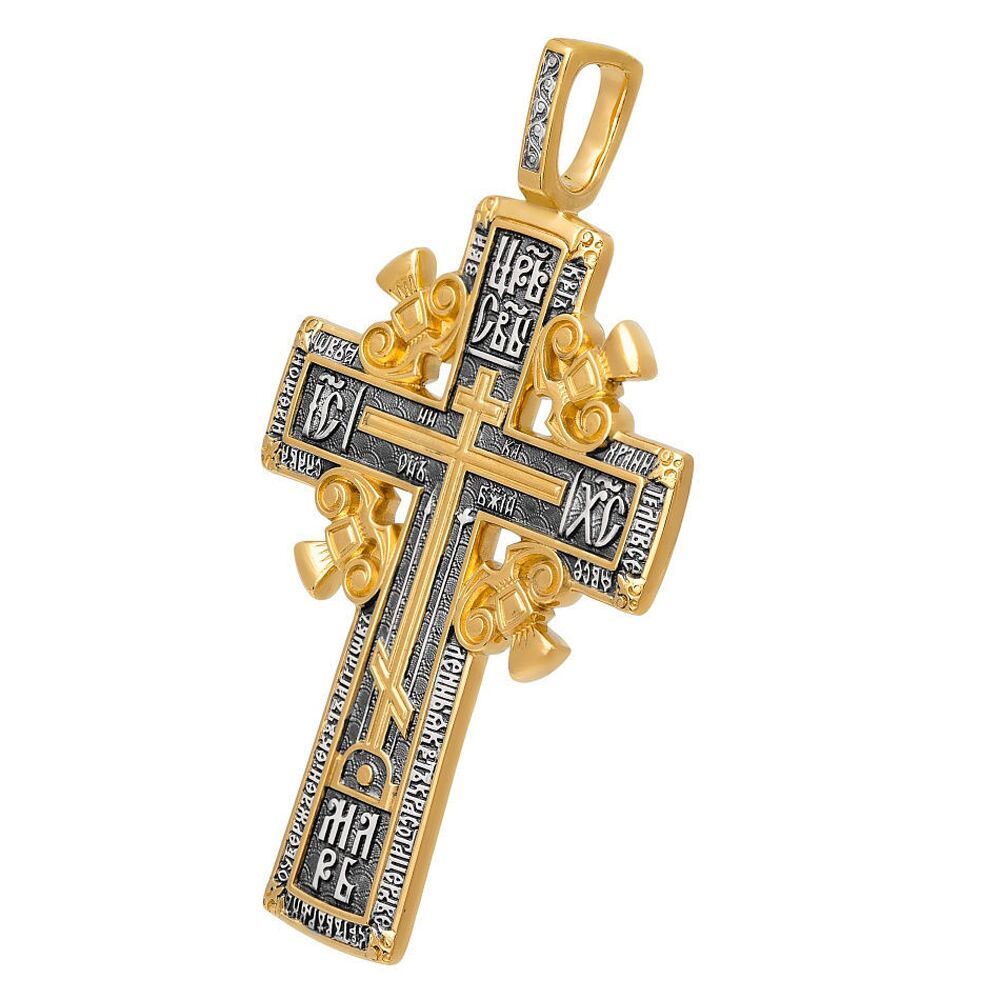 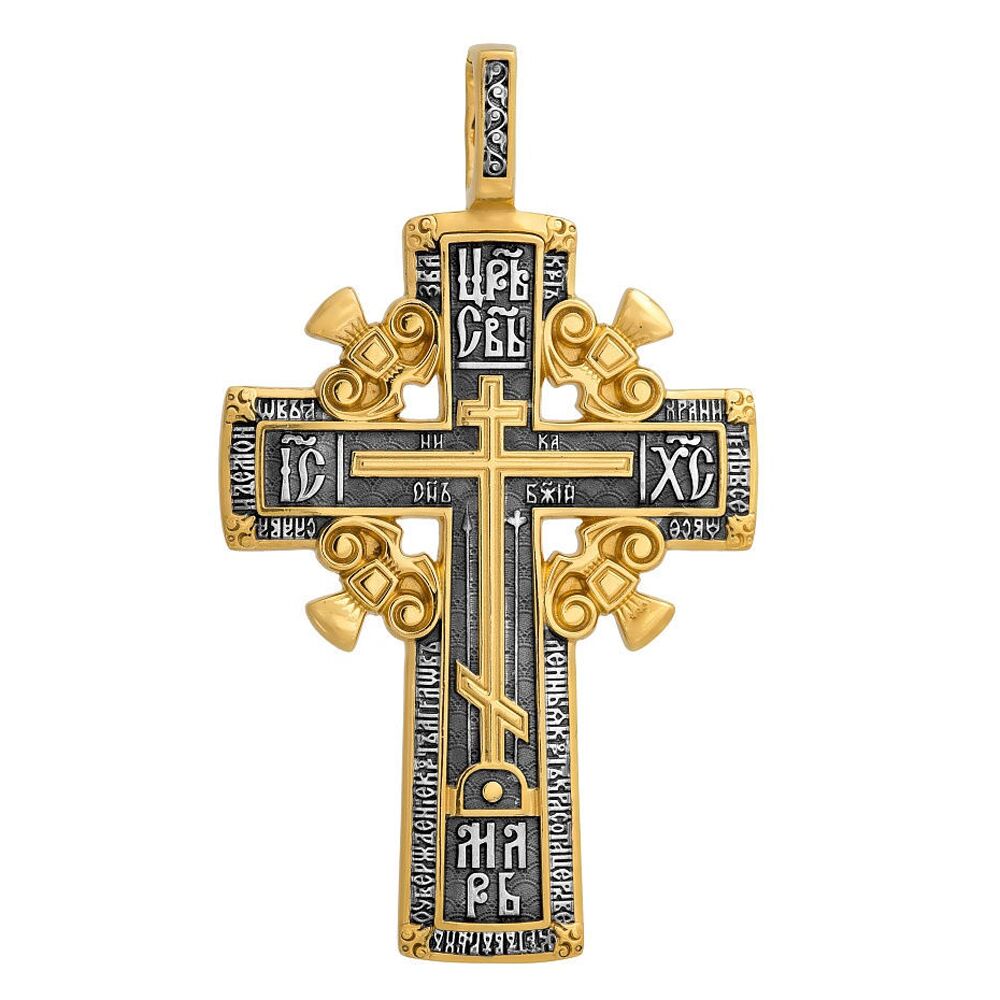 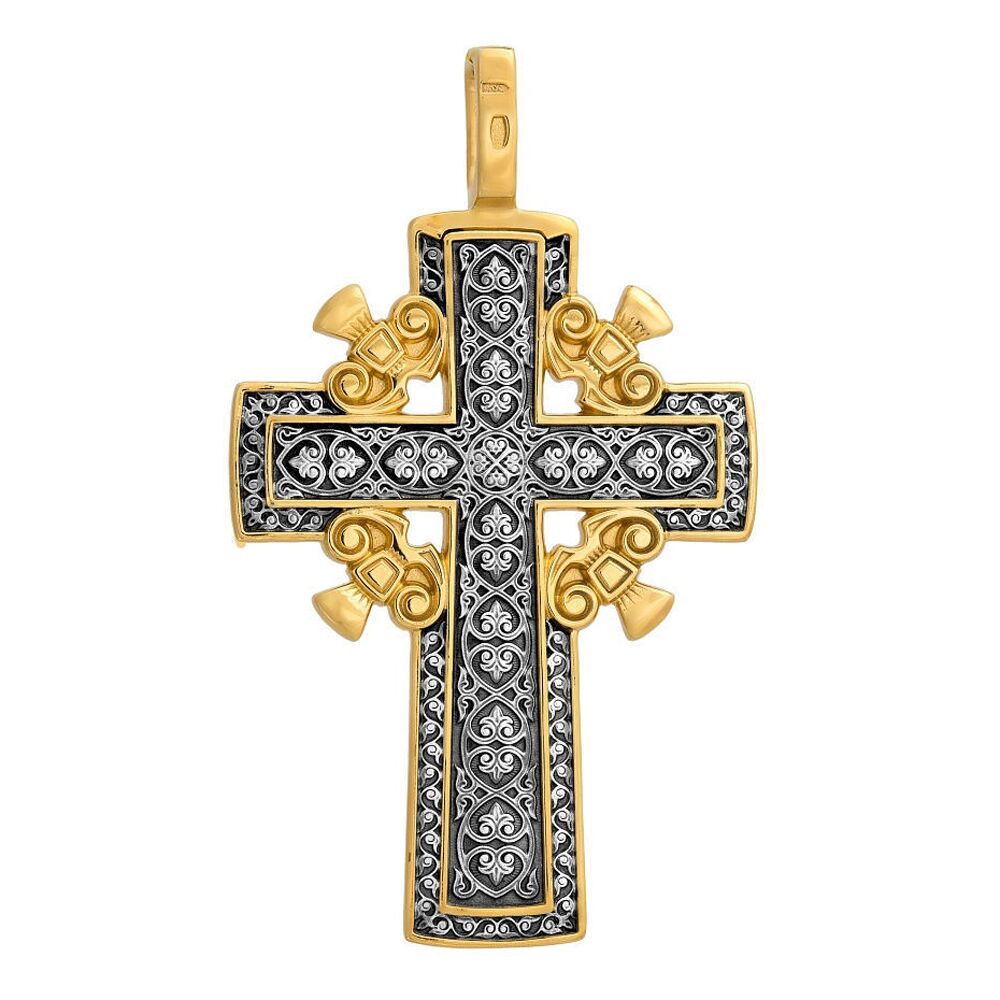 "A silver next-to-the-skin cross with Calvary and a prayer on its obverse, the reverse being floriated, is made in the style of Russian crosses of Peter I period. Those large crosses with embellishments and red or metal beads in the center appeared in Russia between the end of 17th and the beginning of 18th centuries. They combined two cross types: “in blossom” and “sun”.  The embellishments symbolize simultaneously the rayed sun, a berried branch twined around the cross, and the crown of thorns with blood drops. This is the symbol of glorifying of Christ, of righteous Offspring (Jerem. 23, 15), the Crown of truth (Tim. 4, 8), the Crown of glory (Peter 5, 4), Sun of truth правды (Mal. 4, 2); as well as of he Life-giving Cross of Lord the Savior, about which Church speaks that “erected in the middle of the Universe” and “instilled to the Place of a Skull” the Cross of the Lord “grew the bunch of life”; and “enlightened the Universe, dispersed the darkness, and announced the light”. By evangelic the promise it will be the first to appear in the sky before the Second Advent of Christ, “illuminating all the world to the ends of the earth much more than brightness of Sun, and announcing advent of Christ, the Lord of the world” (St. Ephraem the Syrian, †373).

In Orthodoxy there always existed next-to-the-skin crosses both with and without the Lord image, because the cross itself as the great and victorious Christ's weapon had been considered the principal sacramental symbol of Christendom since Apostles` time.

«Calvary Cross»This cross has no the Lord’s image as well. But on its obverse, on Golgotha indicated with a semicircle and lettered МЛРБ (Let be Eden on the Execution Place), there are bossed the eight-ended cross, the stick with a sponge, and the lance – the instruments of Christ's sufferings. On either side of the cross the Lord’s short title “Ис Хс”, and “NICA” are scripted, which means “I overcame”. Upon resurrection the Lord applied to His disciples with those words: «In the world you shall have distress: but have confidence, I have overcome the world» (John 16, 33).

The eight-ended cross shape that is the most commonly used in Orthodox tradition, being the only true according to the Old Believers.  It is in line with the evangelic description that says that after the Crucifixion two more crossbars were nailed to the four-ended cross: the foot and the nameboard “JNRJ (Jesus Nazarene Rex Judaic)”. The basic four-ended shape is full of symbolism as well. St. John Damascene wrote (7th century): “As four ends of the cross are held and joined by its centre, so by the Divine strength hold are height and depth, length and width, i.e. visible and invisible creatures”. In other words, each cross as well has a mystical image of the Lord, His Kingdom of Glory, and the image of sanctity transfigured mundane, for “may be strengthened to comprehend with all the saints what is the breadth and length and height and depth” (Ephs, 3, 18).

The transverse crossbar signifies the earthy, the vertical one indicating the earth aspiration for Heavens. The upper part of the cross belongs to the realm of Divine being that is if separated by the short upper crossbar. In Christian art both kingdoms – of mundane and of Heaven – were often depicted as trees or other plants. In mundane one they are symbols of spiritual renewal, rebirth and of the Mother of God; in the Kingdom of Heaven they symbolize Eden and Christ. The reverse is floriated as if showing the entire world, all its ends that are reaching for God, aspiring to unite in Christ who is symbolized by a fleuron in the center. Sprouts reaching for the center consist of twelve joints. That is the image of twelve Apostles, Christ’s disciples. They were called upon for bringing the world to God by world evangelism. The main artistic conception of the cross lies in glorifying of the Lord Life-giving Cross and its redeeming force for human beings. Such is the prayer on the obverse: “Oh, Cross, you are the guard of the entire Universe, the beauty for Church, the power for rulers, strengthening for the faithful, glory for angels, pest for demons”. (Prayer on the product is reduced). Cross is a symbol of faith and devotion to God, sacral sign of the sacrament of baptism wherewith one obtains the second, spiritual incarnation. Christian is adopted by God, is a member of His Church, and lives with a hope of salvation and futurity, since “Except a man be born of water and of the Spirit, he cannot enter into the kingdom of God”  (John 3, 5). Cross protects you against all sorts of evil, especially against invisible enemies, and helps to be closer to God.