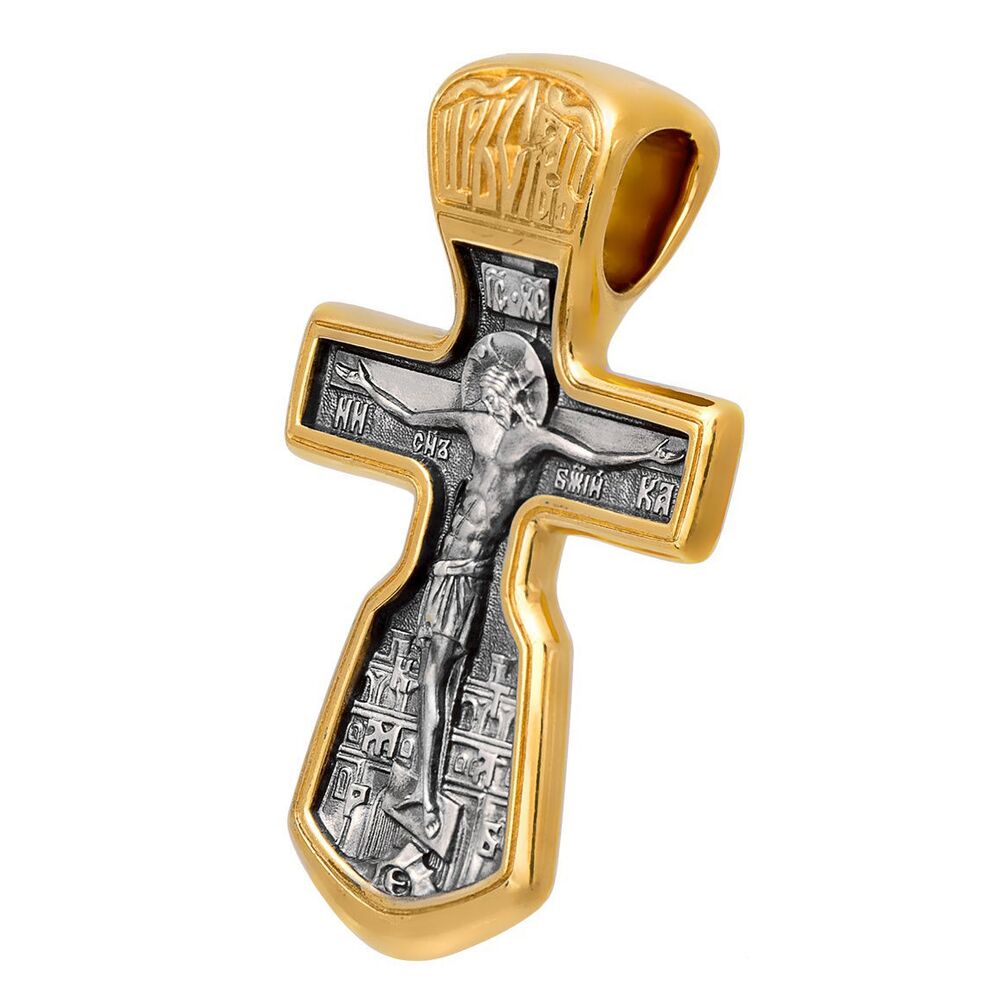 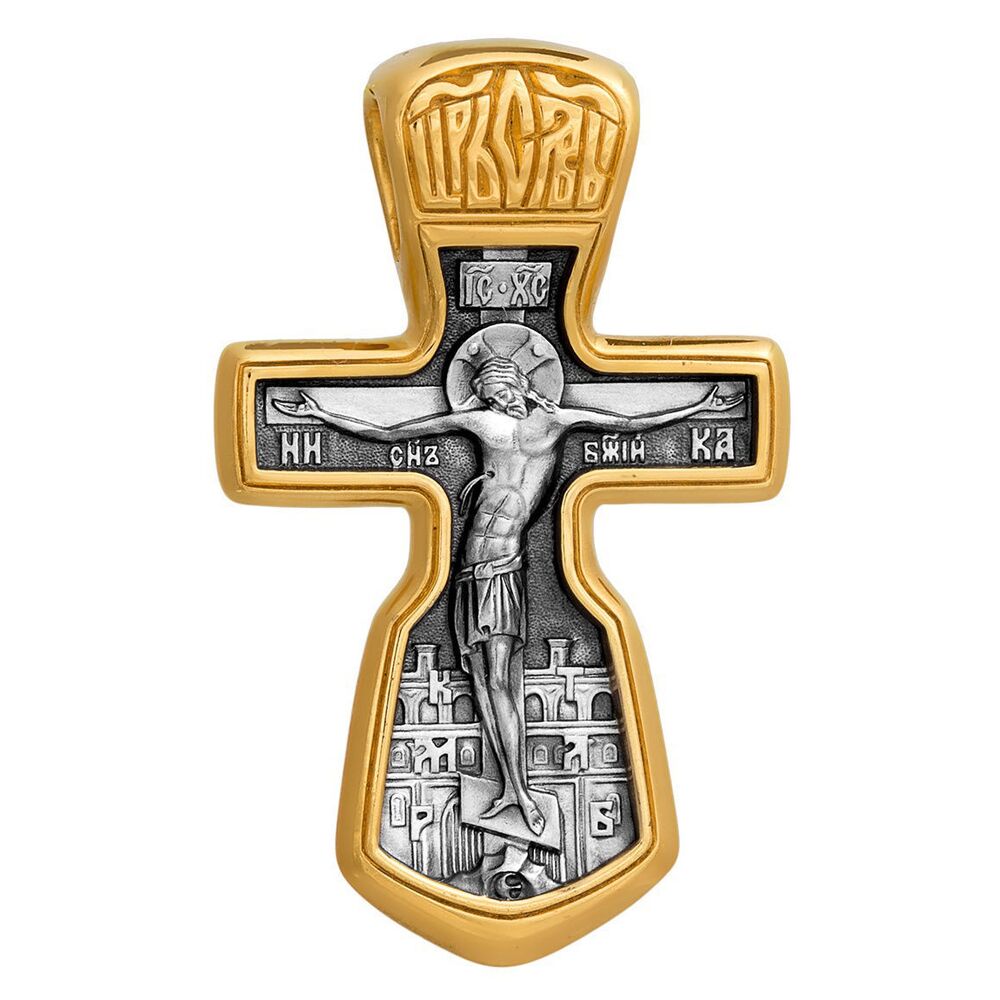 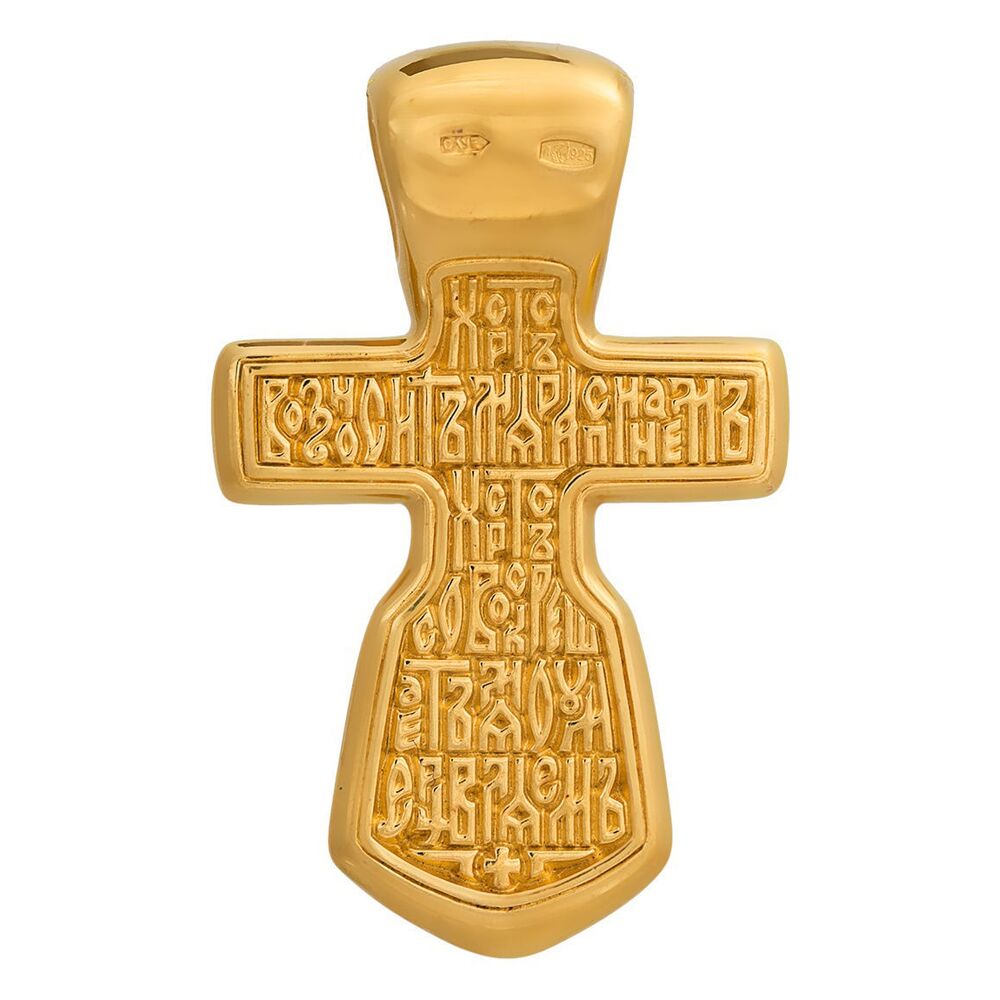 "A small cross with Crucifix and a prayer on its obverse is made in traditions of Russian next-to-the-skin crosses. Its artistic conception reproduces the principal mission of a cross – to be a personal sacral sign of the sacrament of baptism. Christian is adopted by God, is a member of His Church, and lives with a hope of salvation and futurity, since “Except a man be born of water and of the Spirit, he cannot enter into the kingdom of God” (John 3, 5).

On the obverse of the next-to-the-skin crosses Crucifix is most often depicted, since Jesus Christ turned this instrument of execution to that of victory over sin and death. Through His sufferings He expiated human sins; by His death and Descent into Hell He vanquished the Devil, exempted the souls of righteous persons from everlasting death, and opened the gates of heaven for them. Substitutionary death of Jesus Christ, His sacrifice allowed everyone to be redeemed. Therefore on the reverse a devotional doxology is written: “Crucified Christ raises me, killed Christ co-resurrects me”.

The Lord was crucified on the Golgotha (skull, forehead, in Aramaic) Mountain in the environs of Jerusalem, between two thieves.  According to the Legend, His cross was erected just on the burial place of Adam – the first man of the first sin. That is why at the cross foot the skull of Adam and his arm crossbones are often depicted, Golgotha being named Calvary (from late Latin calvaria ‘skull’, translation of Greek golgotha ‘place of a skull’ (Matt. 27:33)). Golgotha is also named the Execution Place, and letters МЛРБ (Let be Eden on the Execution Place) are written beside.

On the Orthodox crosses the Lord is depicted reposing on the cross, and extending his hands as if embracing the whole Universe that is symbolized by the Sun and the Moon; He is invocatory for “all ends of the world” (Isaiah 45, 22). He is the Saviour who flouted death by death, has “NICA” inscription beside, which means “I overcame”. It was this word that the Lord applied to his disciples upon resurrection: «In the world you shall have distress: but have confidence, I have overcome the world» (John 16, 33).

On either side there are the stick with a sponge, and the lance – the instruments of Christ's. The Jerusalem wall is behind. On icons it denotes the execution site, and symbolizes the Heavenly Jerusalem the way where was revealed through Golgotha.

Crosses of various shapes are worshipped in Orthodoxy. Each has symbolic peculiarities of its own, but all crosses direct us to the true Cross of the Lord; and disclose its meaning for mankind. The four-ended shape shows the interconnection of earthly and heavenly, of creaturely and Divine lives for “may be strengthened to comprehend with all the saints what is the breadth and length and height and depth” (Ephs, 3, 18). The transverse crossbar signifies the earthy, the vertical one indicating the earth aspiration for Heavens. The upper part of the cross belongs to the realm of Divine being that is if separated by the short upper crossbar. As St. John Damascene (7th century) wrote: “As four ends of the cross are held and joined by its centre, so by the Divine strength hold are height and depth, length and width, i.e. visible and invisible creatures”.

The eight-ended cross particularly worshipped in Orthodoxy supplements the four-ended symbolism.  The cross upper part symbolizing the sphere of Divine being is as if separated by a short upper bar, where usually “the King of Glory” is written. This bar represents the nameboard “JNRJ (Jesus Nazarene Rex Judaic)” that was nailed to the cross after the Crucifixion. Under Christ’s feet in the earthly part of the cross there is an inclined bar symbolizing the yardstick of human deeds, the scales where good and evil works will be put at the Doomsday. One of the thieves crucified together with Christ blasphemed against God, and the scales sank as if bring him down to hell. The other repented and invoked to God`s mercy. For him those scales indicated the Kingdom of Heaven.

The cross reminds an anchor by its outline. The eight-ended anchor shape was one of the first symbolic images of the cross. According to Apostle Paul, Christ’s Cross allowed people “to lay hold of the hope set before us: which we have as an anchor of the soul, a hope both sure and stedfast and entering into that which is within the veil” (Hebr.6, 18–19). The cross is a great and triumphant Christ’s weapon, the sacred Christian symbol. “Neither for an hour, not for a single moment should we, Christians, leave it”, as St. Ephraem the Syrian (†373г.) says, “but carry it everywhere whatever doing. Whether sleeping or staying awake, or working, or eating, or drinking, or heading for, or sailing, or getting over river – should we embellish all our limbs with vivifying Cross”.