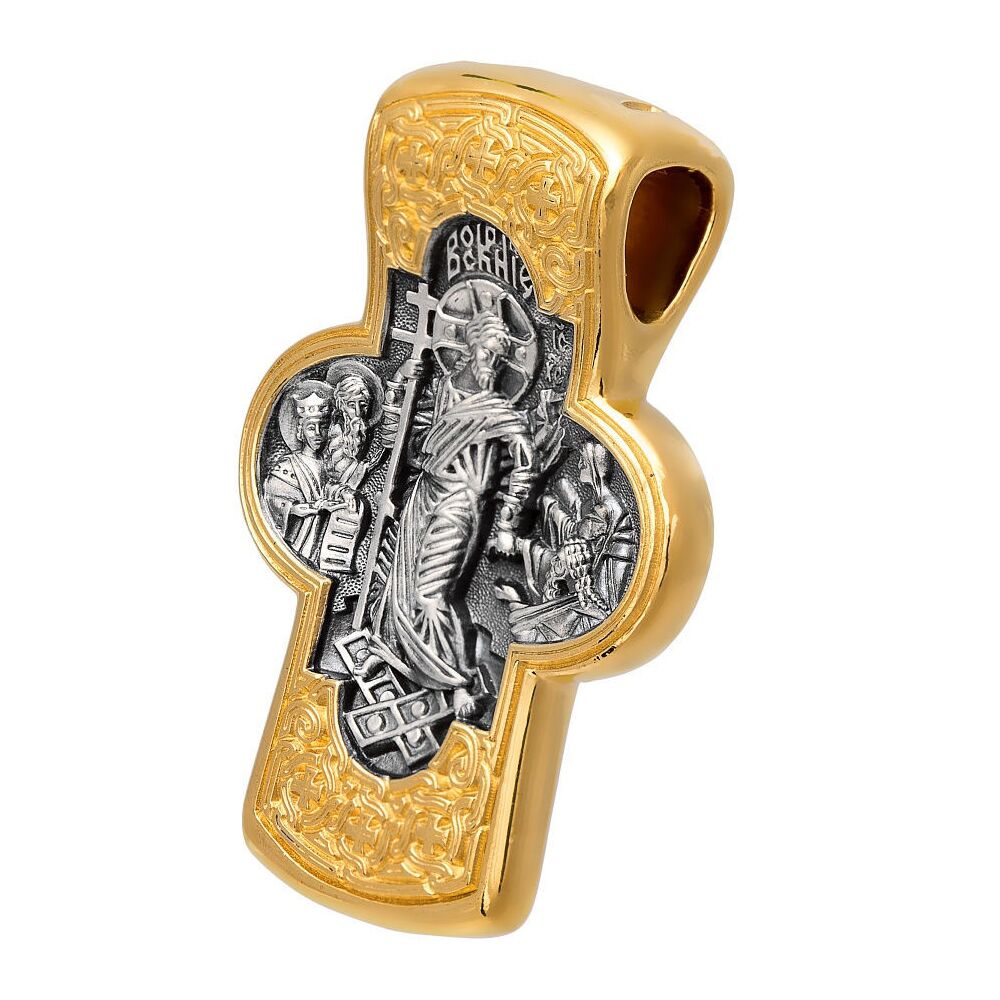 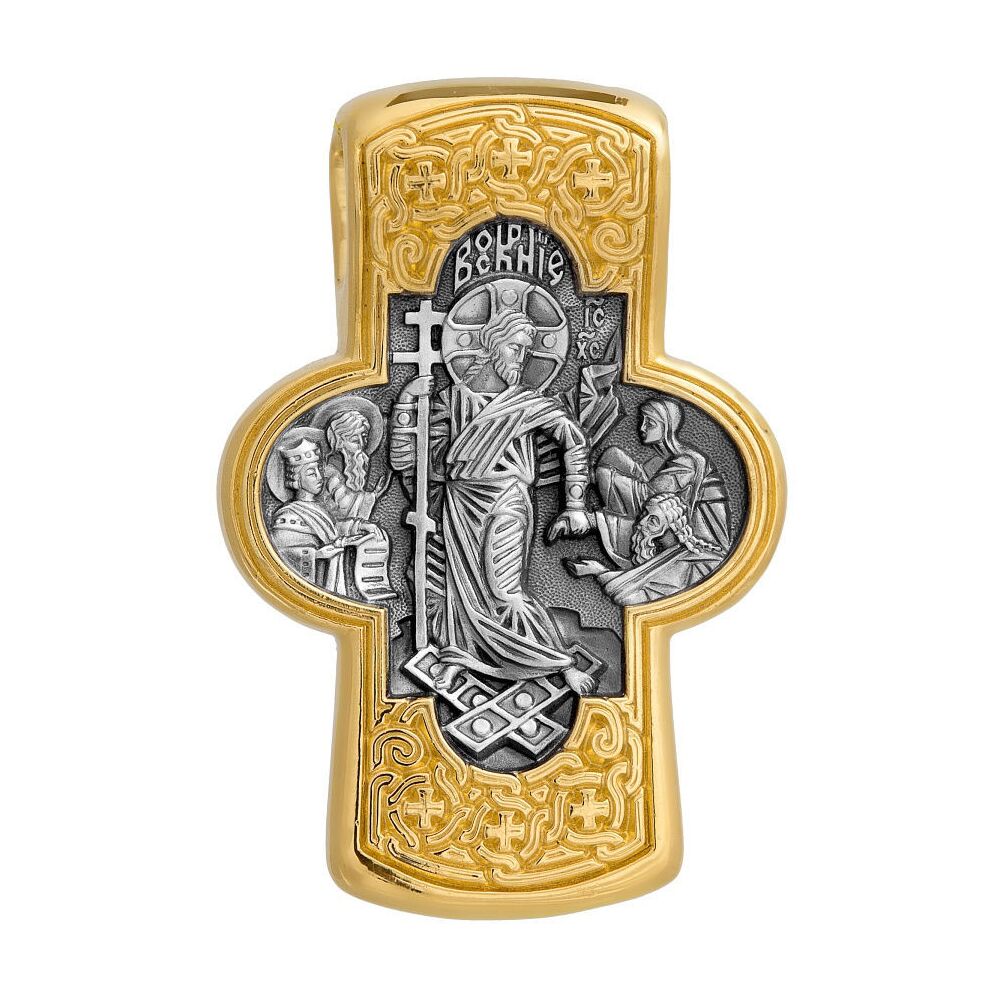 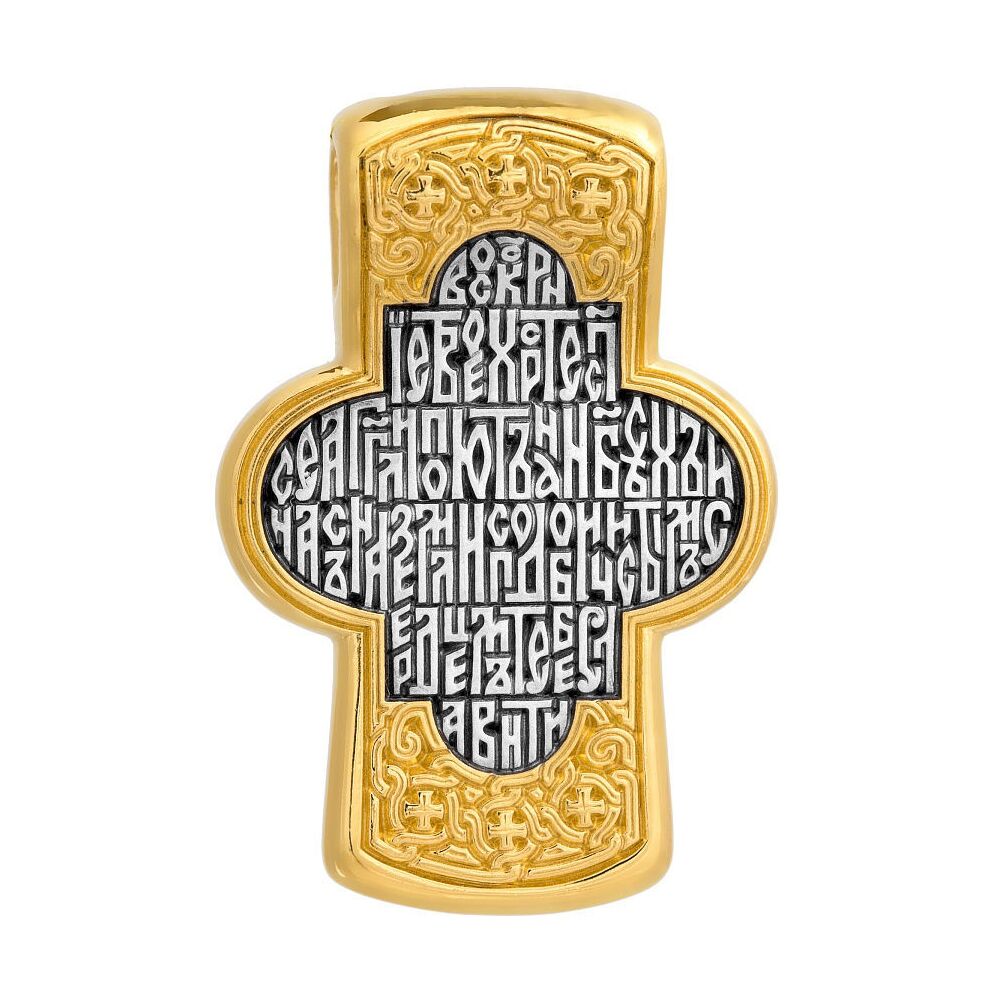 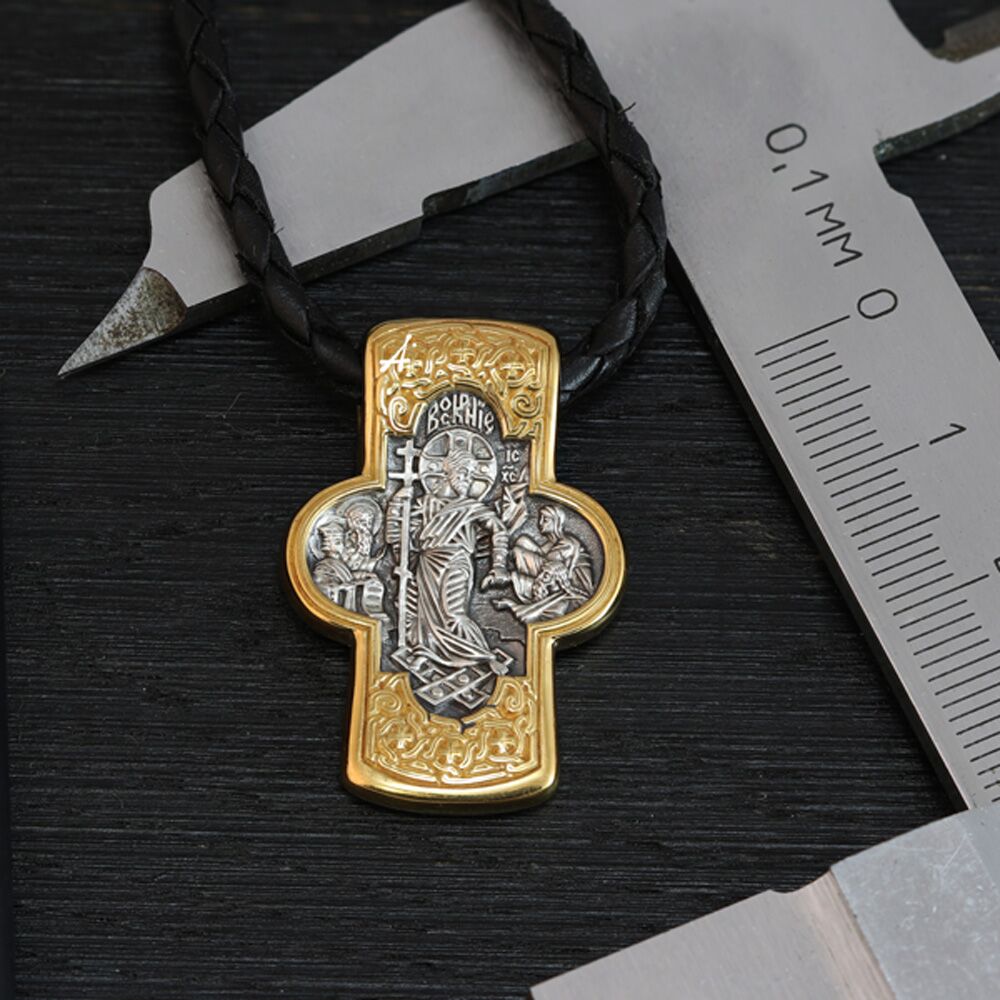 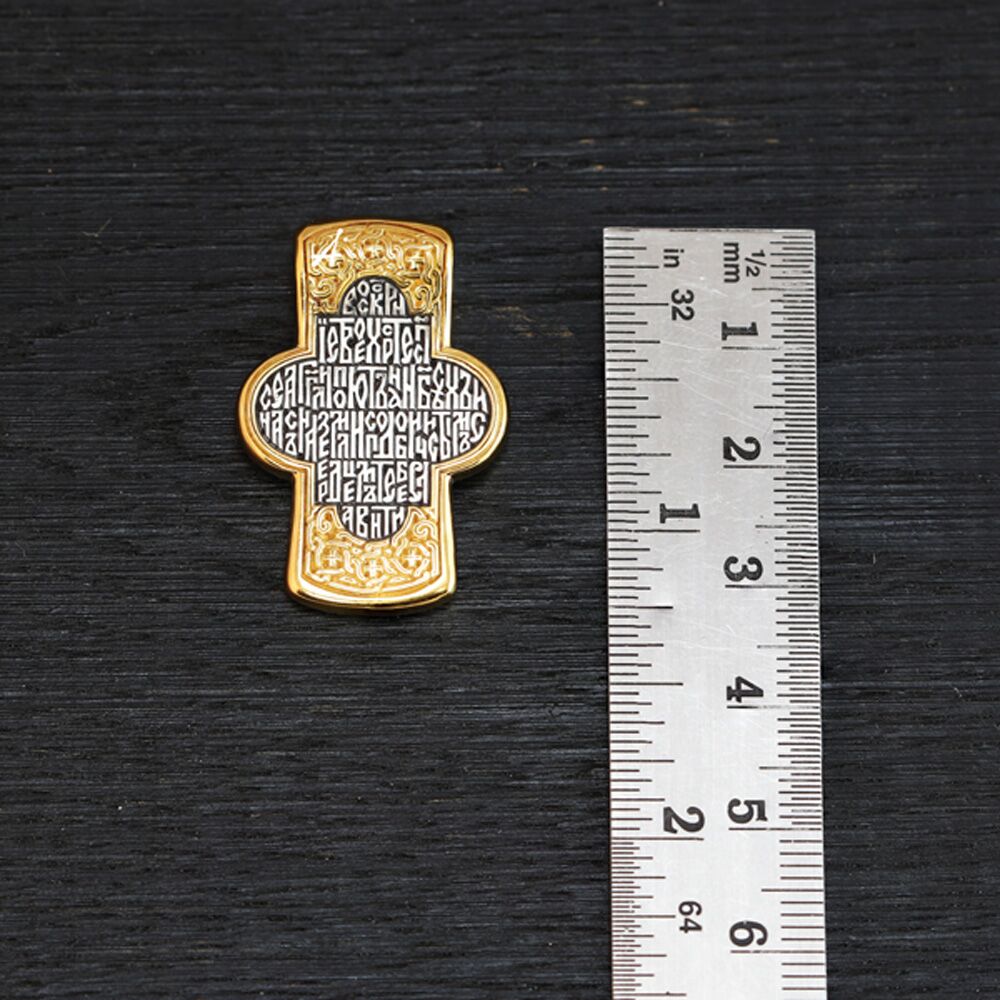 "The cross with icon “Resurrection of Christ” and Easter sticheron on the reverse is architected similar to ancient Russian miniatures wherein weaved ornament often creates one shape in the other, more complicated and symbolic. Here set off in a weaved way is a quatrefoil shape having been traditional for Russian next to the skin crosses and shrine crosses since the 14th century.

Quatrefoil (from Latin quadrifolium — having four leaves) is formed by two transverse quadrangles, one of them having rounded corners. On icons such a cross consisting of transverse quadrangles symbolizes Christ’s Glory, and nimbus in some iconographic versions. At the same time the square having oblong rounded corners is like cruciferous – a plant that symbolized Christ as far back as in the first Christians time. Being combined to quadrangle, this ancient token of ground, the cruciferous personifies Christ, unifying created and Divine in Him. Quatrefoil symbolizes Transfiguration of earth, therefore being so consonant with the Easter icons “Resurrection” or “Descent into Hell”.

None of the Gospel mentions the Lord descending to hell. But ever since the Apostles a legend has existed about Christ and angels assembly descending to the nether world for three days. On arrival to the Earth interior the Lord Himself illuminated it, broke infernal gate that formed into cross under His feet, and liberated righteous souls that languished in the hell. The Lord as well brought the first people – Adam and Eve – out of hell. Their original sin of arrogance, falsehood and disobedience of God initiated all kinds of sin on the Earth and built a barrier between mankind and God. But it was expiated by Christ’s death on the cross. Through His death He smashed the death rule on the Earth, through His resurrection having given hope of raising again from the dead and futurity to all the people. On the cross reverse there is written: “Resurrection of Thee, Christ the Saviour, is carolled by angels in Heavens; and vouchsafe us to glorify thou here on Earth in our pure hearts”.

Adam and Eve stand at the right on the cross, and according to the tradition Christ keeps Adam by hand. On icons “Descent into Hell” Christ holy ancestries are pictured as well, i.e. his genetic forefathers; and prophets – His spiritual predecessors. Presented are here King David Psalmist among whose offsprings the Most Holy Mother of God has been, as well as John the Forerunner who has baptized the Lord and has been the last and the greatest prophet of Christ. People languishing in the hell are pictured in caves at the foot of hills. The caves tightness is symbolized by small semicircular ends of transverse crossbar. Christ image greatness and strength are accentuated by the wide vertical.

The most widespread traditionally are equilateral crosses and crosses with down oblong vertical crossbar. It is attributable to general symbolism of cross shape that represents the universe image to stretch out to four parts of the world and extend both in breadth and upwards. The basic transverse crossbar marks earthy, the vertical denoting the Earth and Heaven tie. Equilateral cross is a symbol of absolute harmony of Divine and created worlds.

In this cross the vertical crossbar is much larger than the transverse one and has the same length below and on top. That is a visible image of “the Earth turning into Heavens” at Eastertide, for God resided inside the Earth. This is the day to unify the earth and heaven, all the ends of the world not to disperse but to aspire after Christ, and to be celebrated by the Orthodox Church as the most Holy Day.

At Eastertide every thing and one in the world thanks and glorifies God. This pure joy reveals symbolically in the cross as well as in the ornament that is braided around three crosses to show figuratively Holy Trinity presence both on the earth and in Heavens. Originating from Byzantium this complicatedly patterned ornament shows everything and everyone in the world to be interrelated. It s a tight knot wherein wreathed is the destiny of various persons, peoples and of the whole universe, God being the invariable centre of everything.

Cross is great and victorious weapon for our salvation, holy symbol of Christendom. “Neither for an hour, not for a single moment should we, Christians, leave it”, as St. Ephraem the Syrian (†373г.) says, “but carry it everywhere whatever doing. Whether sleeping or staying awake, or working, or eating, or drinking, or heading for, or sailing, or getting over river – should we embellish all our limbs with vivifying Cross”.