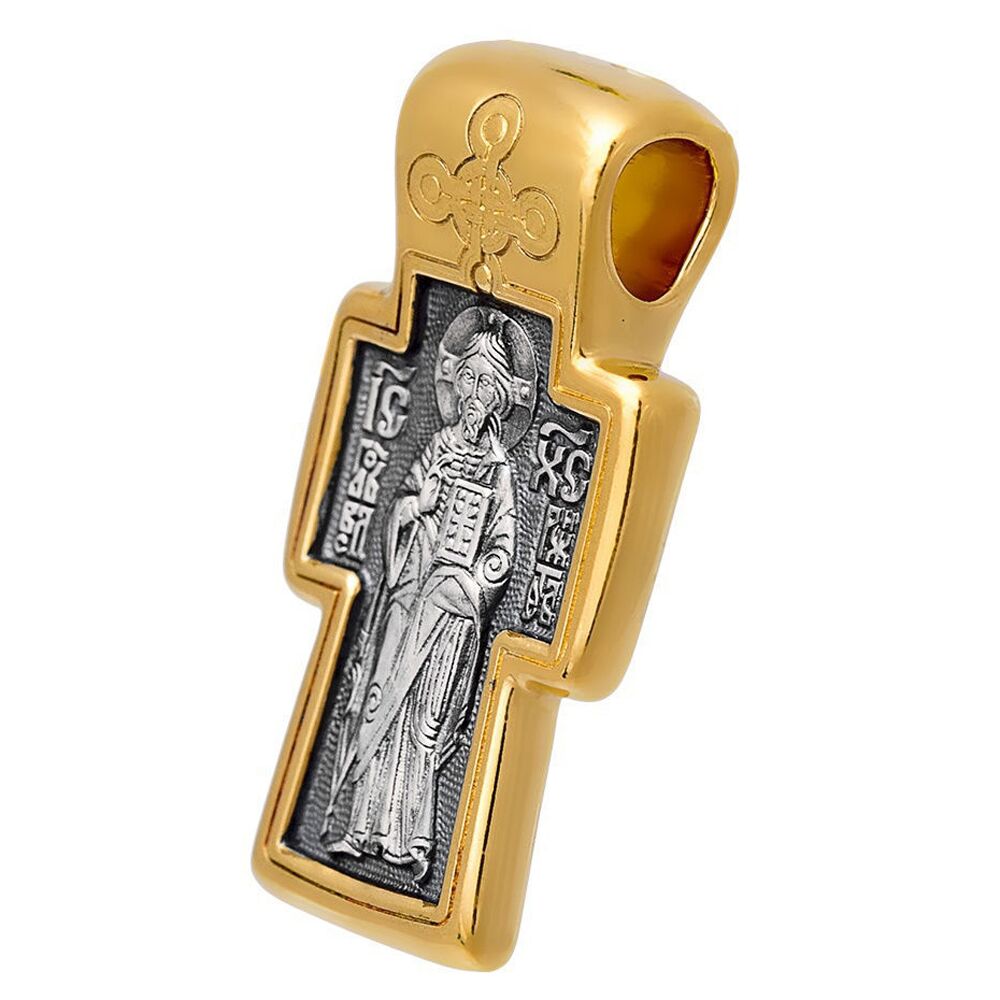 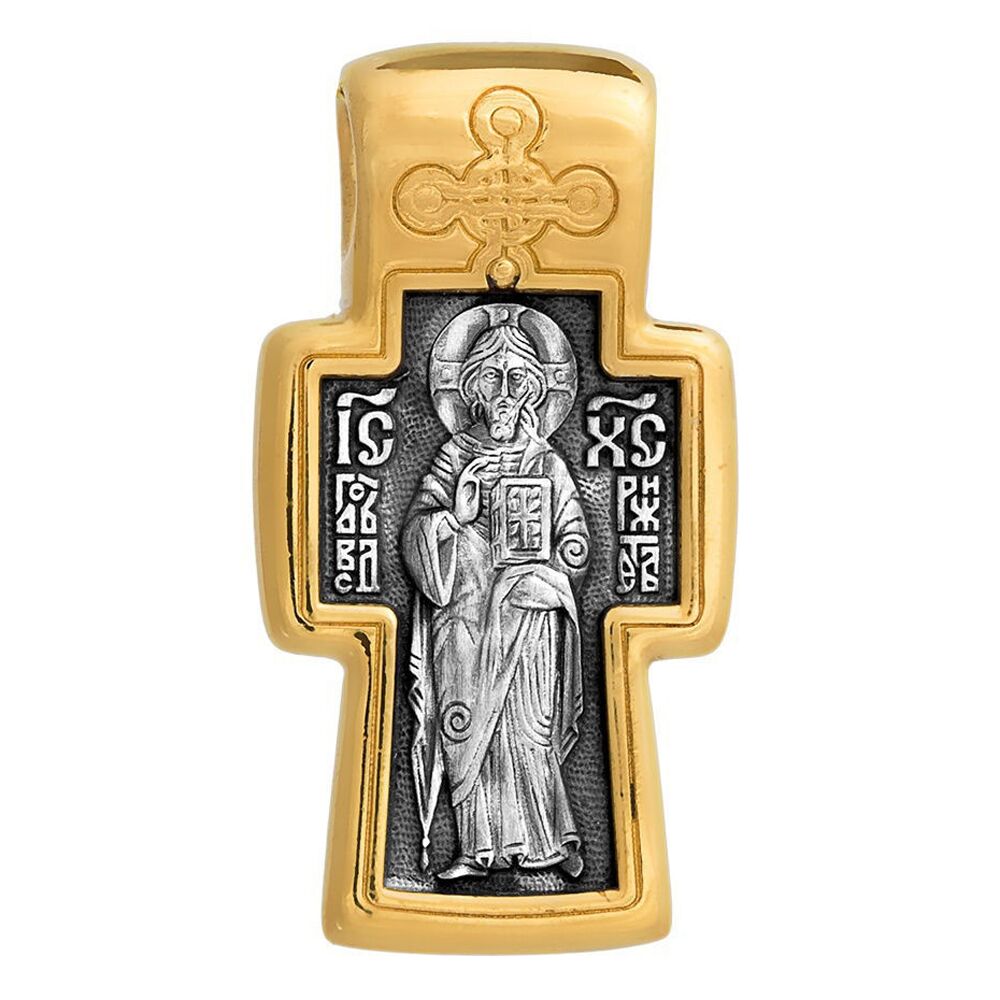 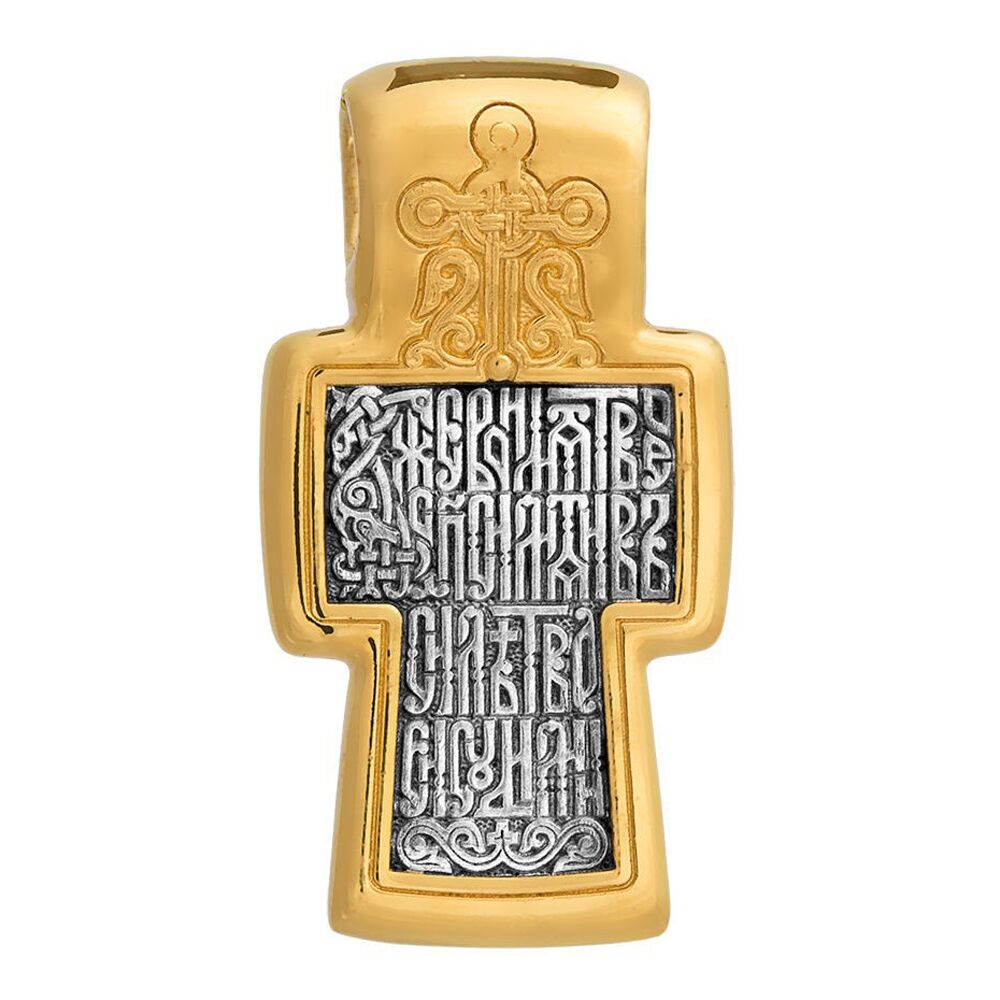 "A small cross with the image of the Lord Almighty on the obverse, and a prayer on the reverse originates from the source of Orthodox culture – from the art of ancient Byzantium wherefrom its simple laconic shape and iconography are borrowed. In Russia as opposed to Byzantium Christ was seldom portrayed full-length on the crosses and icons, but principal attributes and spiritual sense of Greek patterns were preserved thoroughly.

Here the Lord stands freely, with His right hand blessing a book that He holds with care in His left one. On either side of it His sacred name the short title is scripted “ИС ХС” as well as a caption “Almighty” (Pantocrator)”.

The book in Christ’s hand is one of the most diverse symbols in Christian art. In the first place it undoubtedly is the image of Gospel, of the good tidings that the Lord brought to the world when His first advent as a human being. Gospel is also named the New Testament, i.e. a new treaty, new agreement that was covenanted between God and people. In the Old Testament God gave people the Ten Commandments, in the New Testament giving only one that became the most important. It is the Love Commandment: “That you love one another, as I have loved you, that you also love one another”. (John 13; 34). The beloved disciple of Christ, St. John the Theologian, Apostle and Evangelist tells about this Commandment: “it should have been enough to fulfill only it”.

But the book in Christ’s hand symbolizes not only Gospel. In the Bible the entire Universe, the entire God created world is often likened to a book. God creates the world by His Word, and only the Lord Himself may open this book of the good word of God, therefore it is symbolically spoken that it is a sealed book (Apoc. 5; 9). The image of Christ with the book is called “Pantocrator”, i.e. ruling (allegorically, keeping in hand) the entire world.

But the Lord keeps in His hand not only the entire present-day world. The book symbolizes the future world that will be created after the Second Advent and Doomsday. The Lord Almighty, Pantocrator, master of human destinies holds the Book of Life. Woe is to those whose names lack therein – the Apostle John says – retribution of God will befall them. “Without are dogs and sorcerers and unchaste and murderers and servers of idols and every one that loveth and maketh a lie”. (Apoc. 22; 15).

On the cross reverse there is an ancient prayer, disclosing the profound meaning of the image of Christ Pantocrator placed on the obverse: “O Lord, save me by Your name, and judge me by Your power”. This prayer conveys confidence in God mercy, Who so fell in love with the world that sent the only begotten Son of Him to death on the cross for saving of sinful people; and Who is free either to show mercy to, or to punish them at  the Last Judgment.  Our Lord Jesus Christ Himself is God's power Himself, personification of Divine Love and Truth. Saying the prayer we ask God to save us from eternal punishment not because we deserve something different, but due to Christ; and make us joint-heirs with futurity by His everlasting love."