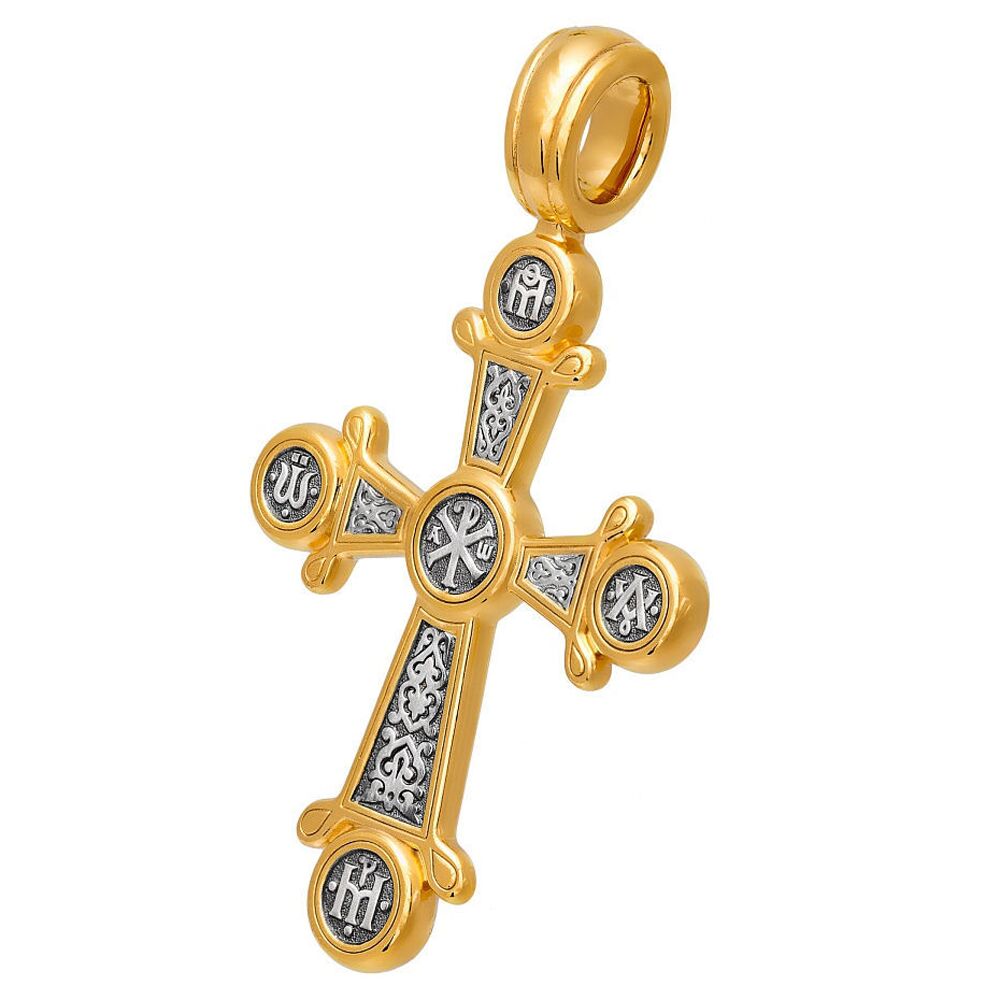 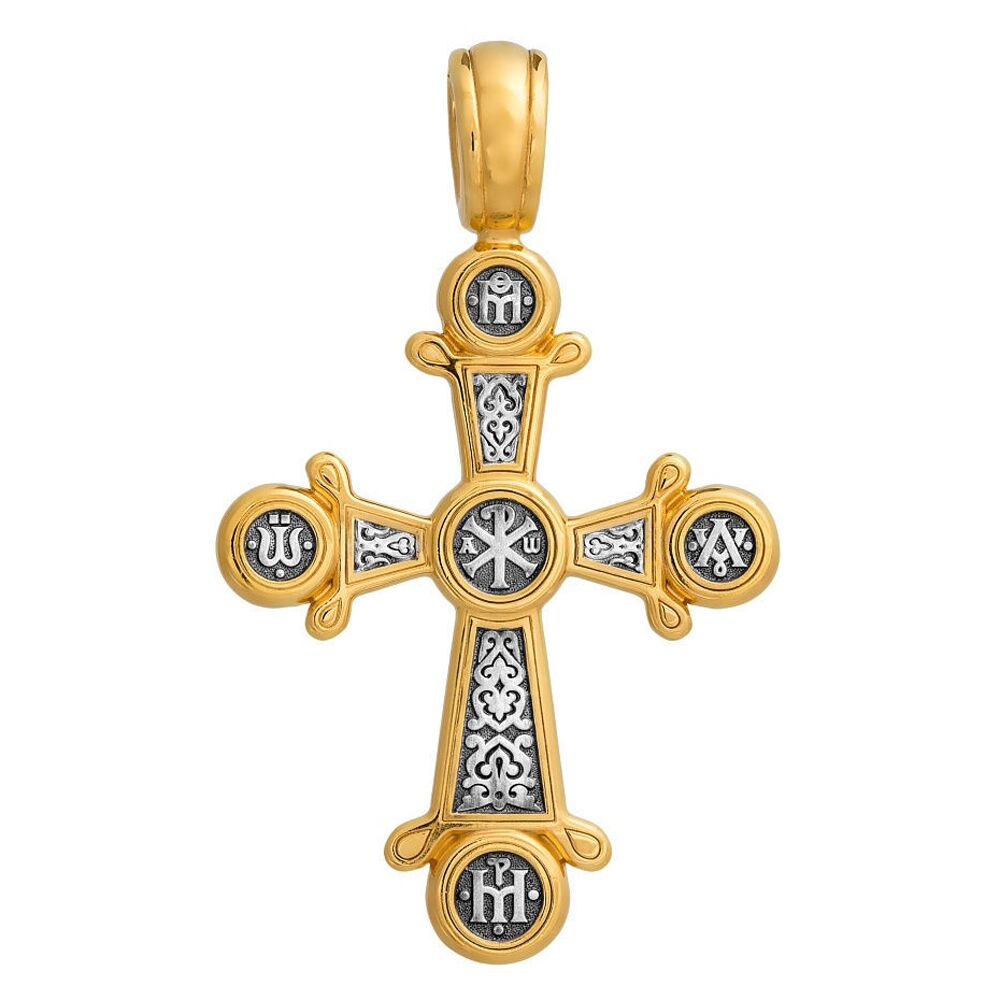 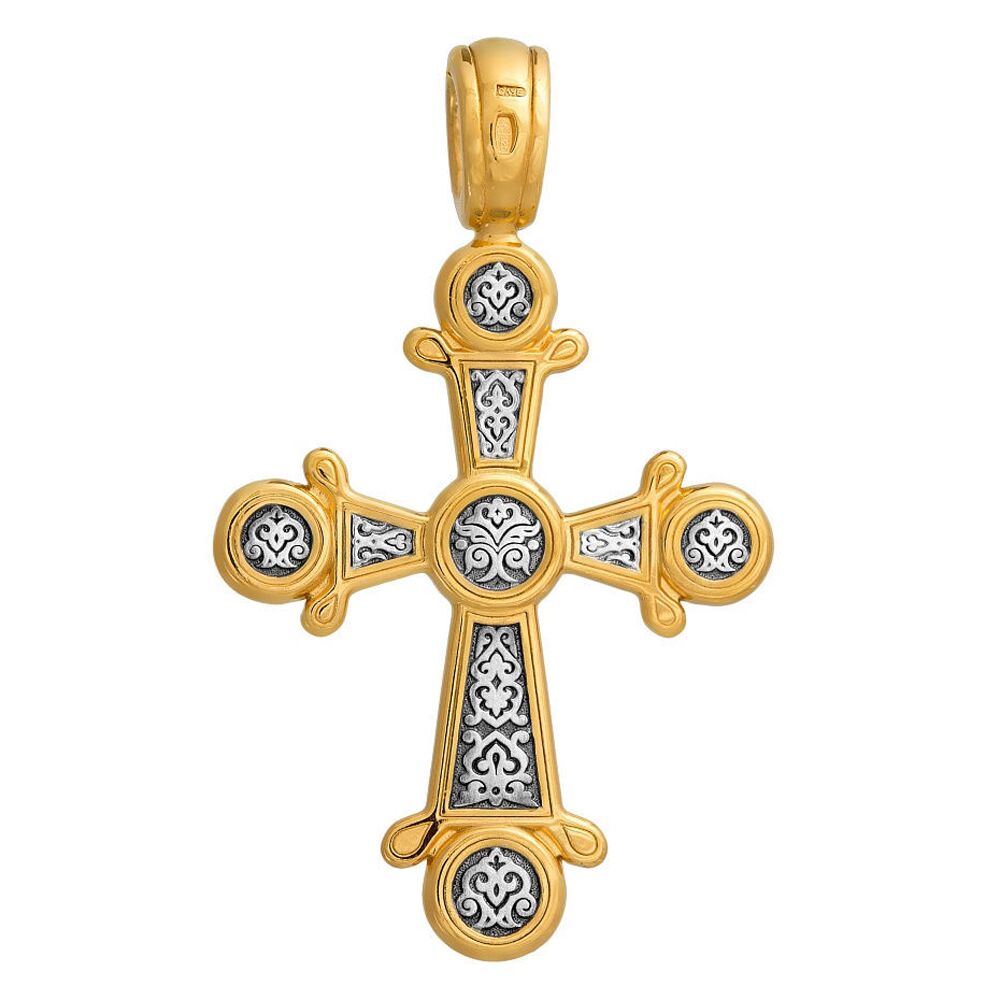 "The cross has the shape of rays radiating from a central circle, completed with four smaller circles. This shape is one of the most widespread in Bysantium and Old Russia, and symbolizes the world being enlightened by Christ doctrine. In the center of the obverse there is chrismon – the monogram made of two Greek letters Х and Р, or I and Х (initials of Christ name), and forming cross by their outline. Chrismon is a symbolical image of our Lord Jesus Christ Himself. The monogram is supplemented with Greek alpha and omega. These are the first and the last letters of the Greek ABC that symbolize the Lord significance for the Universe life. “I am Alpha and Omega, the beginning and the end, saith the Lord God, Who is and Who was and Who is to come, the Almighty”.

The crossbars both on the cross obverse and the reverse are ornamented with “hearts in blossom”, the favourite ornament in Christian art. It is composed of heart-shaped figures with stylized lilies inside. In Christianity lily symbolizes purity, sanctity and humbleness before God. In His sermon Christ indicated lilies as perfectly beautiful flowers. Those were lilies that He held up as an example for those people who in their concern about earthly wellbeing forgot God. “The lilies do not care about their garments, – the Lord said, – though they are dressed better than King Solomon – it is God who dresses them so well”. So a person who clothed in humility and won spiritual purity and love would receive everything from Him.

By its shape lily resembles the Holy Trinity, therefore a legend was composed in the old days that when Archangel Gabriel appeared before Virgin Mary to annunciate of Her giving birth to Divine Son, he had a lily in his hand. Lily also is a symbol of purification by baptism; and many researchers of Christian symbolism indicate that due to its shape it is symbolically related to chrismon, and is often pictured beside in old ornaments.

Due to rhythmic reiteration of the same elements any ornament sensifies the Universe order, harmony, and consistency. Static in outward appearance it always carries intrinsic motion. Being a symbol of four ends of the earth, of the entire Universe inwardly consolidated by Divine power, the cross as if “sprouts” by an ornament, being filled with believer hearts that are “in blossom” by devotion to God. The monogram of Christ on the obverse becomes the center of motion, on the reverse that becoming a symbolical tree.

It is the Tree of Life. This image should not be interpreted word for word, as a tree simply growing in the garden. In patristic legend of the Orthodox Church Christ Himself is called the Tree of Life, the latter being named Christ and Church. There was no neither evil, nor knowledge of evil, or fruit of evil whatever; neither sickness, nor death, or animosity in eternal Heavenly Church, in the Tree of Life because Love reigned everywhere. It served as an image of blissful life in our Lord Jesus Christ. Church teaches that person can have a spiritual life gracious in itself only through abiding in Christ and uniting with Him. But fruits of this wonderful Tree are unavailable to a person who has not communicated the Divine World through the sacrament of baptism."