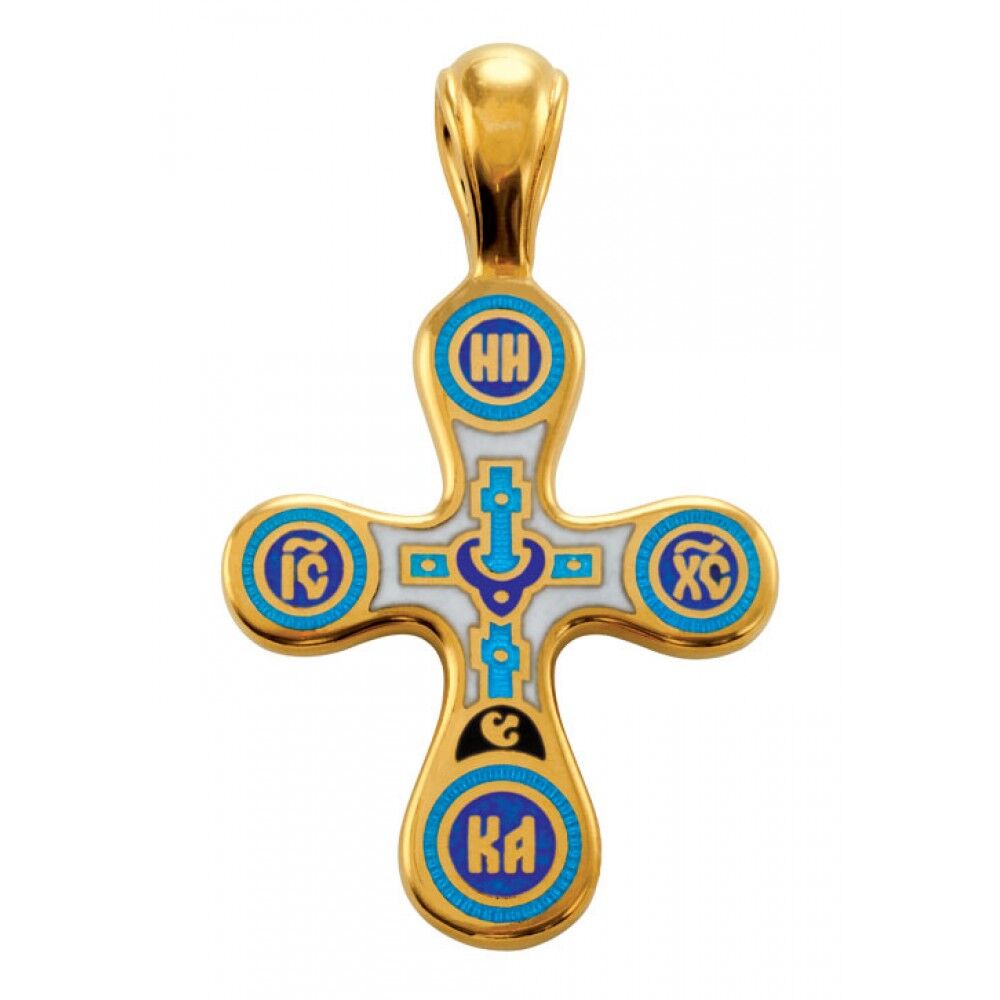 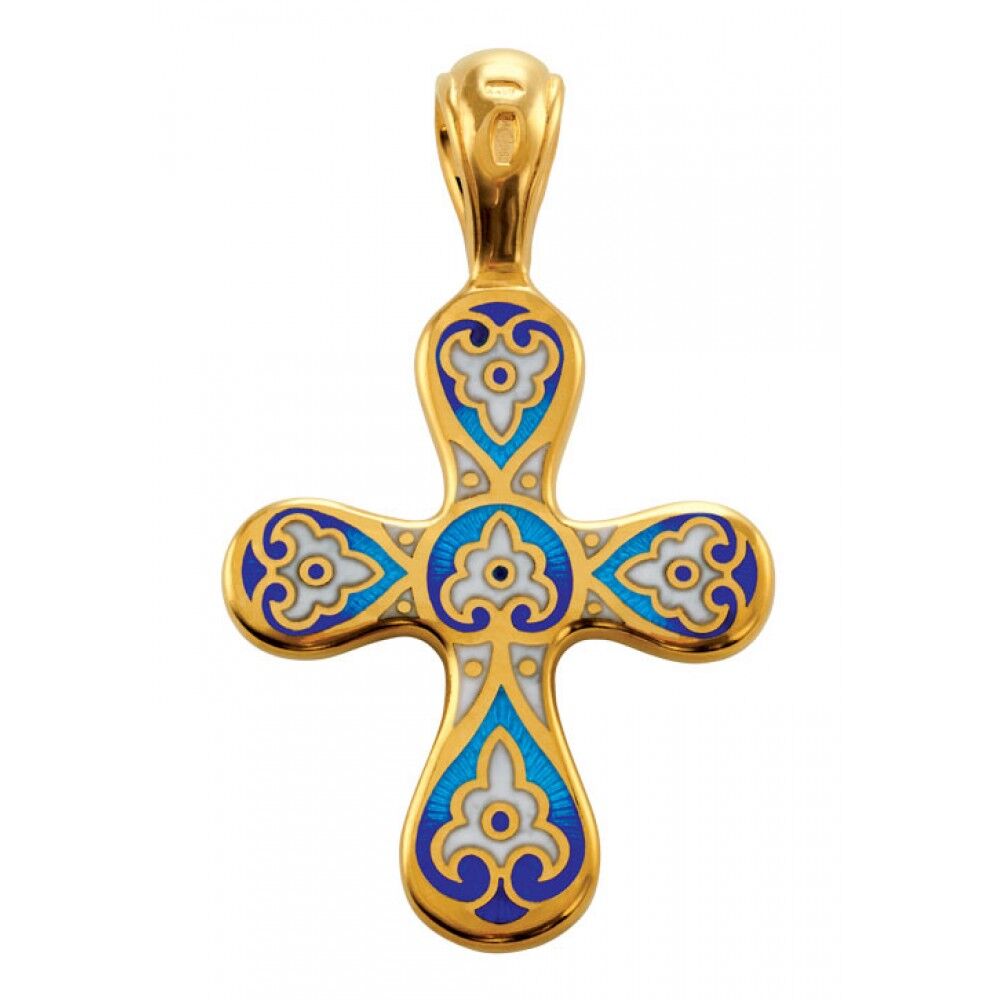 "A small enameled cross made in traditions of 19th century, period of renascence of Byzantine enameling techniques. On it obverse we see Calvary, eight-ended cross with a crescent collar (“zata”), and circles with horizontal short titles, and vertical “НИКА”. The reverse is floriated.

Since the cross itself is a sacral and deeply symbolical thing, everything pictured on it has inner meaning. Thus an eight-ended cross with a crescent collar is a symbolical image of the Crucifixion of Christ.

After the Crucifixion two more crossbars were nailed to the four-ended cross: a foot rest and a nameplate inscribed: “Jesus the Nazarene, the King of the Jews”, and as a blasphemy a crucifixion thorn instead of king’s crown was put on His head. The crescent signifies the King’s crown, that one of the King of kings, the thorn crown, and the crown of the Redeemer. Being put on the cross it symbolizes the image of Christ as a true King and Redeemer. Therefore on either side there are short titles of His Holy name “Jesus Christ”, “НИКА” being written top-down, which means “I overcame”. Those were the words said by the Lord to His disciples on Resurrection: “Have confidence, I have overcome the world” (John16, 33). Circles wherein the letters are inscribed symbolize Heaven and eternity – spatial and temporal spheres of Divine aseity.

St. John Damascene (7th century), Doctor of the Church, and ascetic wrote: “The four ends of the cross are kept and joined with its centre as well as height and depth, length and width, i.e. visible and invisible things are kept together by the Divine power”. In other words each cross has both mystical image of the Lord with His Kingdom of Glory, and the image of the world transform by sanctity in order “to comprehend with all the saints what is the breadth and length and height and depth” (Ephs. 3, 18).

The main transverse crossbar as having length and width signifies the earthly regions; the vertical one indicating the nether regions and Heavenly spheres as well as the earth rising to Heaven. The cross upper part as if separated by the short upper crossbar symbolizes the sphere of Divine aseity. The slanted foot rest is the symbol of a yardstick of human deeds. Christ was crucified between two thieves. One of them committed blasphemy against God, and the yardstick slanted under the weight of his sins as if bringing him down to hell. The other thief repented of his sins, and asked Jesus to be merciful to him and to remember him in his kingdom. For him the footrest indicated the Kingdom of Heaven.

The earthly and Heavenly Kingdoms in the Christian art were often portrayed as trees or other plants. In the earthly world they symbolized spiritual renewal, revival as well as the Mother of God; in the Kingdom of Heaven they were the symbols of the paradise and of Christ.  Floriated reverse symbolically portrays the entire world, all ends of the earth reaching for God, aspiring to unite in Christ. A tree in the central circle is as if Christ Himself, the Tree of Life, which is in the paradise of my God (Rev. 2, 7), a righteous Branch (Jer. 23, 15).

Color is as well of considerable importance in cross symbolism.

In the Christian art each color has a precise meaning of its own. Golden and silver ones are the main. White and yellow are their pictorial analogs. The Lord’s Glory, the Heavenly, and the Divine Throne are pictured in gold. White means grace, purity and sanctity. Farther on there are used dark blue (azure) and purple – the colors of the garments of Christ and of the Mother of God. Dark blue signifies the Heavenly Hierarchy, purple meaning regal title. The color of Christ’s blood, of His Nativity, and Redeeming Sacrifice is symbolized by red, near to purple. Sky blue is given to the Mother of God as well as to those ones who on winning of the Grace of God aspires for the Heavenly Country. Green – the color of youth and of nature's great awakening – reveals vivifying effect of the Holy Spirit. Black is kept aloof. It means death.  On icons it symbolizes hell; for monks it is a symbol of giving up the earthly life and of praying humbly in the hope of spiritual rebirth.

The basic idea of a cross artistic design is uniting with Christ and rebirth for futurity, which is obtained by a person only in the sacrament of baptism. Next-to-skin cross is a sacred sign of that sacrament, a symbol of devotion to God and the belief in Him. Getting baptized a person obtains the second – spiritual – birth. He is adopted by God; joins His Church and finds the hope of salvation and futurity according to God's Word: “Except a man be born of water and of the Spirit, he cannot enter into the kingdom of God” (John 3, 5). The cross protects one against all kind of evil and helps him (her) to become closer to God. “If any man will come after me, let him deny himself, and take up his cross, and follow me” (Math. 16, 24)."