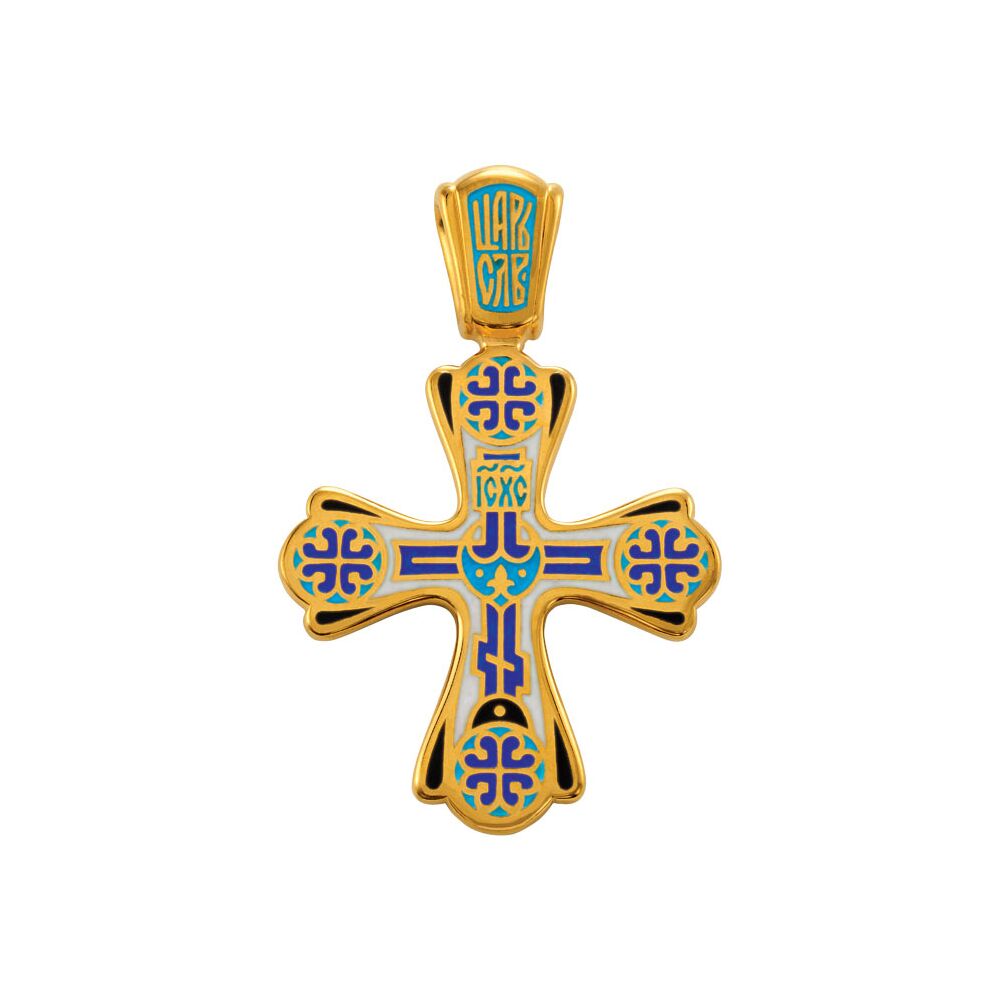 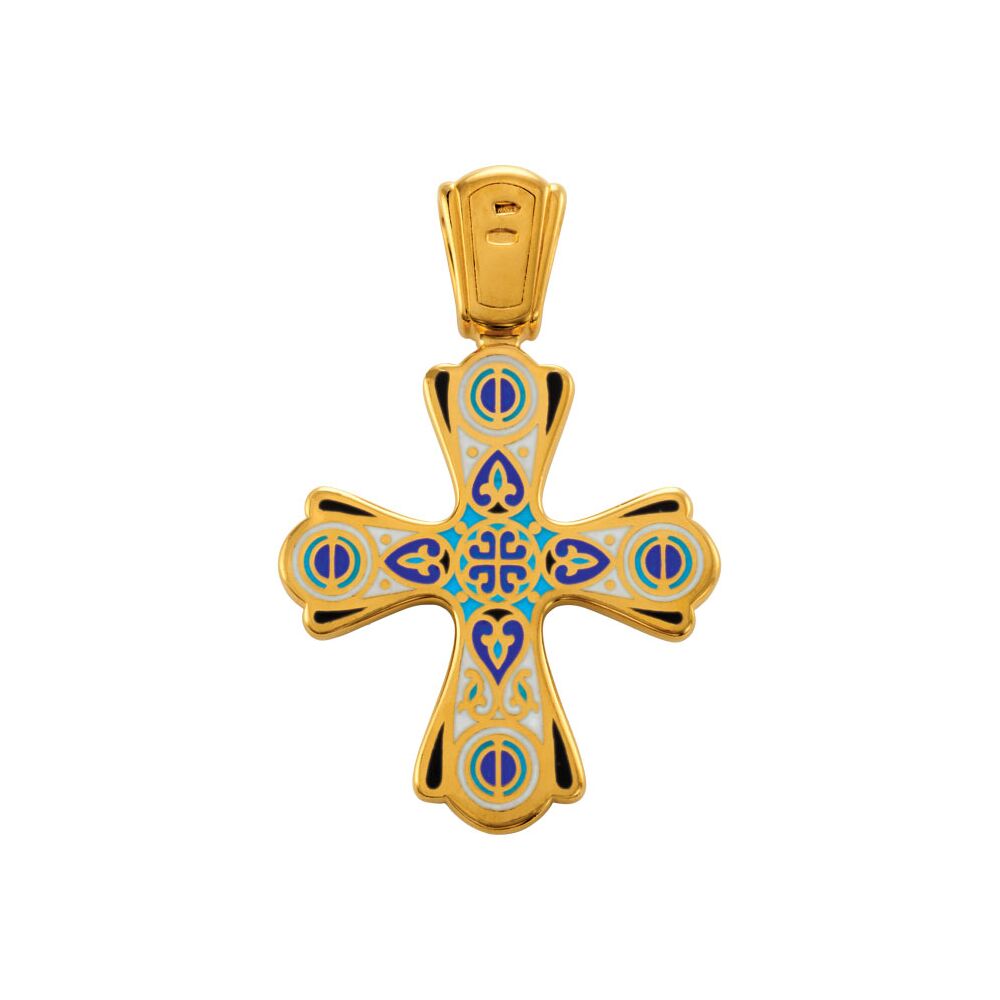 "The artistic design of the cross relies on the old traditions of Byzantine art. The tripetalous ends of the cross and hot enameling technique refer us to the great art of that Orthodox Empire.

The secret on pigmented glass and enameling had been discovered in Ancient Egypt. But in Byzantium in 10th century the artistic enamel flourished violently. Plique-a-jour and Champlevé started being used here for icons and small ecclesiastic jewelry. Bright tracery made of baked glass and gold framed was extremely durable. Therefore the enameling technique was widespread all over Christendom. Masters from Georgia, Russia and Limoges were particularly famous.

«Calvary. Marvel at the Divine Marvelous Miracle»It is this technique that the cross is made. Its obverse shows eight-ended cross with a crescent collar, the reverse being lettered and floriated.

Eight-ended cross with a small crescent collar (“zata”) in the center symbolizes Crucified Christ. Zata is a traditional Russian adornment used for decoration of icons of Christ and the Most Holy Mother of God; it was suspended about the neck. It symbolizes regal title reminding both king’s crown, and festal precious neckpieces that Byzantine emperors and Russian tsars wore on state occasions. Zata on this cross also symbolizes the thorn crown of the Savior.

At the cross foot there is a round cave with a point. That is a symbol of the Mount Golgotha whereon the Lord has been crucified, and wherein the skull of Adam has been found according to the legend in order to be cleansed of sins by Divine blood.

On the upper crossbar there are short titles of His Holy Name, above being written “the King of Glory”, since Church venerates the Cross of Christ as a Life-Giving one, as a place of Christ’s glory and of His victory over death.

The cross shape is symbolical as well. It is interpreted as the image of the world stretching for the four corners of the earth and rising from the earth to Heaven where God is in the center. In this cross the Divine eternal presence in the world is additionally symbolized by the crossbars tripetalous endings (crines), and by circles with inscribed crosses. Crines, or lilies are both the symbol of purity and grace, and the image of the Holy Trinity. Encircled cross is the symbol of Christ Himself Who is glorified as the Light of Truth and the Sun of the righteousness that enlighten everything by Its rays.

Colors are as well important for the cross symbolism, accentuating it additionally. Each color has a precise meaning of its own. Golden and silver ones are the main. White and yellow are their pictorial analogs. God Himself, His Glory, Divine and Uncreated Light of His Kingdom, and the Divine Throne are pictured in gold. The white symbolizes grace, purity and sanctity.

Christ and Our Lady are most often portrayed in dark blue and purple garments on the gold background (more rarely on a silver one). The dark blue (azure) signifies the Heavenly Hierarchy, the purple meaning regal dignity. Azure chiton and purple himation (cloak) of Christ; and purple kerchief and azure tunic of the Mother of God indicate that we see the King and the Queen of Heaven. Sky blue consisting of dark blue and white inheres in the Mother of God as well as in everyone who having gained grace aspires to the Heavenly Homeland. Green color – color of youth and spring awakening of nature – reveals vivifying effect of the Holy Spirit. Black has quite a separate sense. It means death. On icons it symbolizes the hell, and for monks it means giving the earthly life up and humble praying in the hope of revival of the soul.

Crosses made in azure and white colors carry an image of greatness of Christ and of the Most Holy and Immaculate Mother of Him. Crosses made in red and purple gamut are as if transubstantiated and sanctified by Christ’s blood, since in icon painting those colors symbolize Christ’s blood, His Nativity, and Redeeming Sacrifice. Green – the color of youth and of nature's great awakening – reveals vivifying effect of the Holy Spirit. Black is kept aloof. It means death.  On icons it symbolizes hell; for monks it is a symbol of giving up the earthly life and of praying humbly in the hope of spiritual rebirth. That is why only the grave of Adam is pictured in black on the cross. In artistic image there is disclosed the joy of the knowledge of God– a pure and clear feeling receivable only in the sacramental of baptism. Next to skin cross is a sacral sign of this Sacramental, symbol of person communion with God and belief in Him."