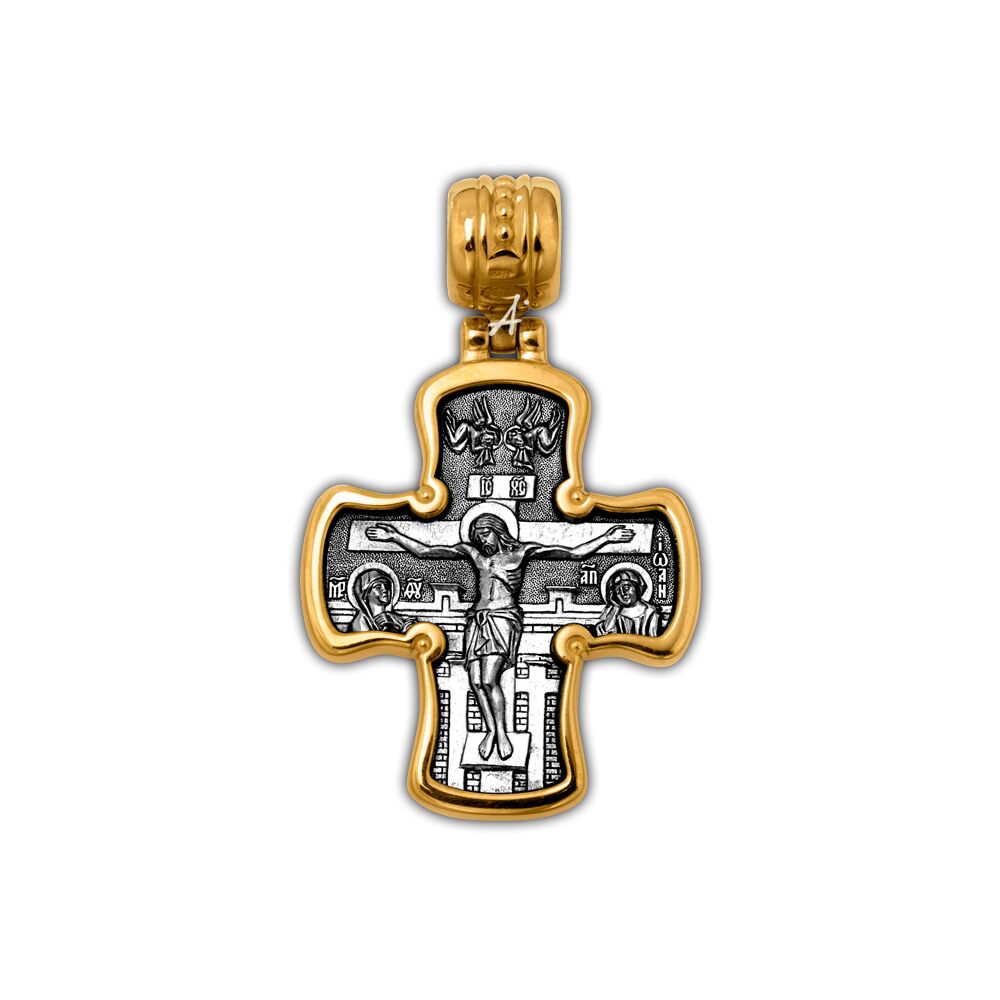 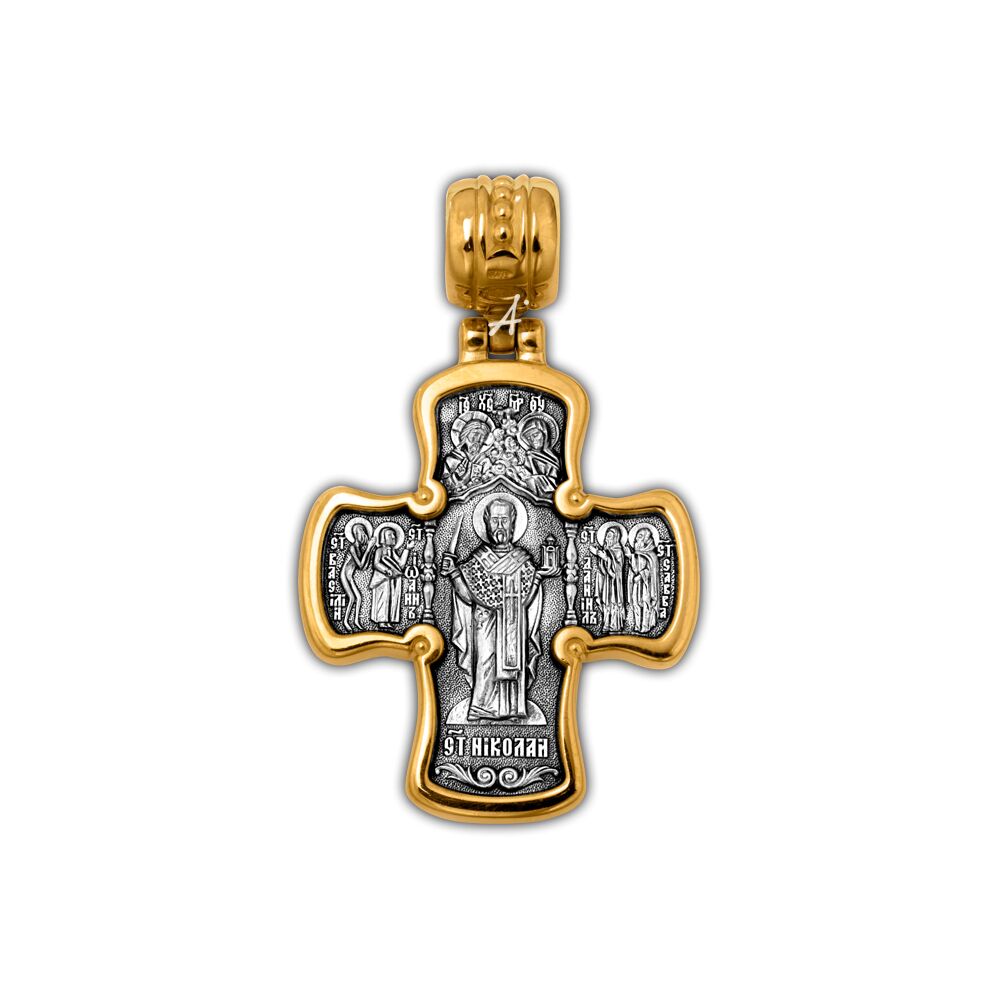 "According the canon he cross obverse is dedicated to our Lord Jesus Christ. On next-to-the-skin crosses the Crucifixion is mostly depicted symbolizing victory over sin and death. By His sufferings the Lord had redeemed human sins: through His descent into hell after decease He defeated the devil, delivered righteous souls from eternal death and opened the gates of Heaven for them. Christ's sacrifice made the salvation of every human being possible. Therefore, on the Orthodox crosses the Lord is portrayed not suffering, but as if enheavening and embracing the whole world. He is the Savior of mankind who trampled down death by death, and calling to himself ""all corners of the earth"" (Is. 45, 22.). On both sides of Christ shown are His Mother, the Most Holy Virgin Mary, and His beloved disciple the Apostle John the Theologian. They has stood beside the Cross all the time until the end, until the Lord gave up His spirit to His Heavenly Father. Behind we see the wall of Jerusalem. On icons it represents the place of execution and symbolizes New Jerusalem, the way to which opened for human beings through Calvary.

On the cross reverse there is the icon of the most venerated Russian saint – St. Nicholas the Wonderworker (latter part of the 3d century). He was the bishop of Myra, a city in a Roman province Lycia in Asia Minor. He became famous for great wonders and deeds of mercy that he keeps making even in the next world. St. Nicholas is invoked for intercession by the needy, the distressed, and the convicted guiltlessly. He helps everyone who appeals to him with faith and prayer – to students, travelers, sailors and merchants; he heals the sick, harmonizes conflicting parties, find the lost, and even raises the dead.

The image of the saint is represented in the well-known iconography of ""Nikola of Mozhaisk."" On the icon St. Nicholas holds a sword in one hand and a miniature image of the temple in the other. The appearance of the icon is attributed to miraculous protection of the city Mozhaisk by St. Nicholas. According to legend, when the city was besieged by the Tartars St. Nicholas appeared in the air above the temple with a sword in one hand and a walled church in the other. The enemy frightened of the vision fled away, and citizens ""in grateful memory of the powerful intercession of St. Nicholas, soon has image of his miraculous appearance carved of wood."" This wooden sculpture of the 16th century remained up to now. Being the visible embodiment of effective assistance of the saint, it had become one of the most revered images of him.

On both sides of St. Nicholas there are placed the images of the great Moscow saints nationwide celebrated for their wonders. On the right fools-for-Christ of 16th century stand: Basil the Blessed, in whose honor the most famous Russian cathedral on the Red Square in Moscow is named; and John Big-Cap, a Blessed Fool-for-Christ, who is buried in this church together with the Basil the Blessed. On the left Venerable miracle-workers – Daniel of Moscow, the youngest son of Alexander Nevsky; and St. Sabbas of Storozhi. Both saints were the founders of great Russian monasteries of the 14th century – of the Holy Danilov (the first) Monastery in Moscow, and of the Savvino-Storozhevsky (the latter) Monastery in Zvenigorod."