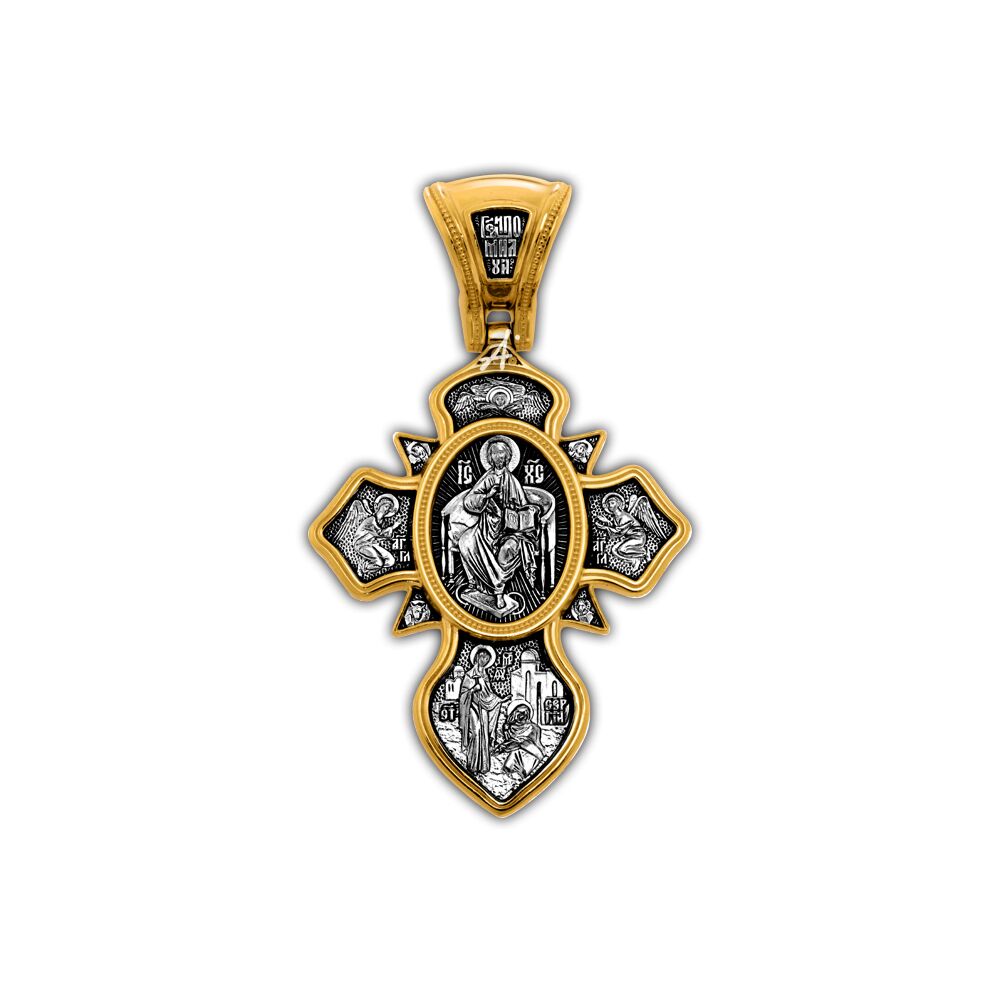 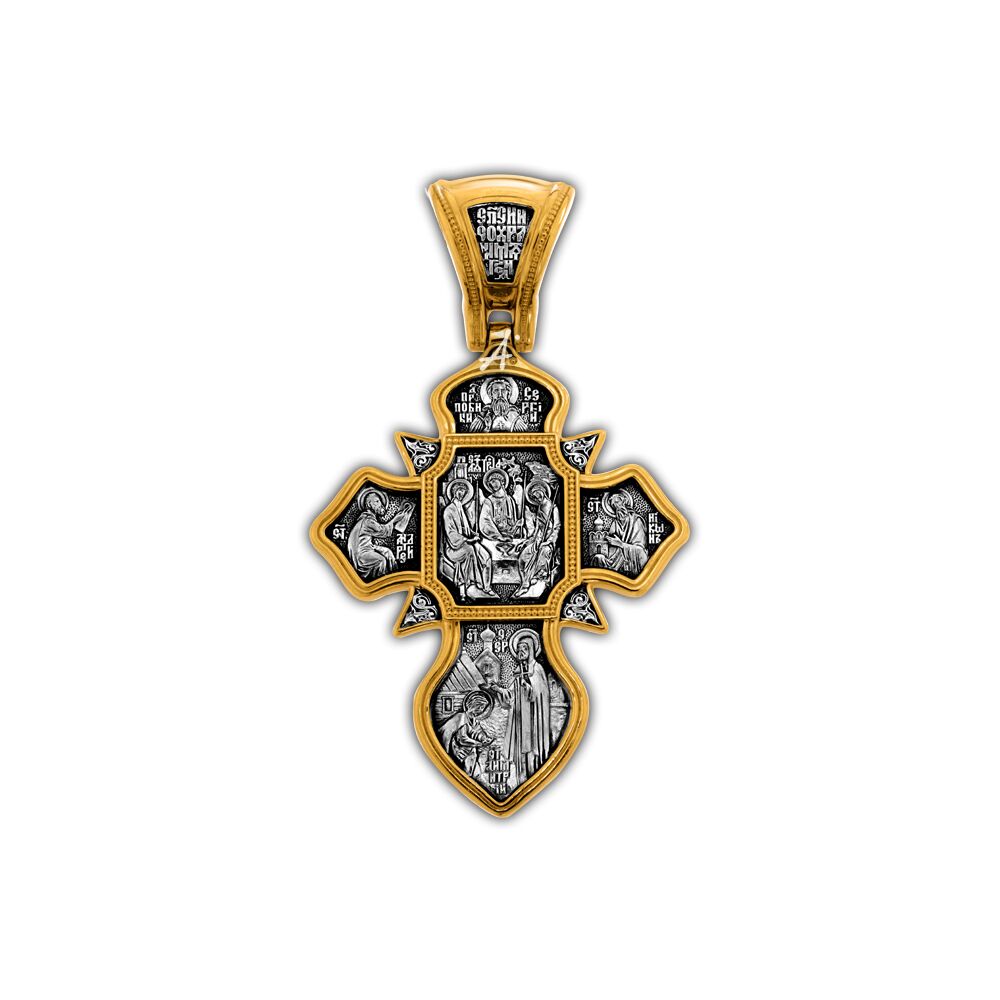 "Two-sided next-to-the-skin cross is dedicated to the Trinity Lavra of St. Sergius, the spiritual center of the Russian Orthodox Church and to its founder – St. Sergius of Radonezh. None of the cross sides can be called ""reverse"" because each has the image of Lord God in the center. On one side He is represented as the Holy Trinity that appeared to the forefather Abraham, the other showing Him as the Lord Almighty. God is beforestood by St. Sergius of Radonezh and the saints that have become His spiritual heirs.

Russia's largest monastery grew from a tiny wooden church built in the name of the Holy Trinity by St. Sergius and his brother Ven. Stephen in the impenetrable forest of Radonezh in 1337. But it burned down and in 1422 through the efforts of Ven. Nikon of Radonezh, the pupil of St. Sergius, the old wooden church was replaced by a new stone one. It was for the iconostasis of this new cathedral that Ven. Andrei Rublev painted the icon of the Most Holy Trinity – the supreme work of Russian spirituality and a masterpiece of world art. The central image on one side of the cross replicates the iconography of the great shrine. The icon painter also celebrated among the saints is himself portrayed to the right of his icon.

Placed is at the top the icon of St. Sergius of Radonezh. It was in ""praise"" to him that Ven. Andrei Rublev painted this great image as an embodiment of his spiritual testament. St. Sergius taught that the holy image of Triune God includes ineffable goodness and a model for human life, the spiritual ideal, toward which one should strive. By ""gazing at"" the loving manner that connects the Divine Faces ""fear of hate discord of this world"" is overcome, and rancor and pride are mollified. To the left of the Trinity image we see Ven. Nikon of Radonezh – the beloved disciple of St. Sergius. It was he whom the saint left his monastery and his disciples for spiritual guidance, and commanded the word of the Triune God as the image of perfect love to be carried to the world.

The teachings of St. Sergius changed ancient Rus’, helped to overcome feudal disunity that had been destroying the country. According to contemporaries, St. Sergius in ""quiet and gentle words"" could affect the most coarsened and hardened heart, and accommodate the warring princes with each other. In 1356 he visited princes of Rostov and Nizhny Novgorod, then St. Blessed Oleg of Ryazan; and many other local princes of unconsolidated Rus’. Due to his activities many Russian princes made terms with the Moscow Grand Prince Dmitry Donskoy and acknowledged his supremacy by 1380 – the time of the Battle of Kulikovo. For this activity, historians have called St. Sergius spiritual gatherer of Rus’. At the foot of the Trinity icon we see St. Sergius of Radonezh blessing St. Prince Dmitry Donskoy for fight with Mamai in the Battle of Kulikovo.

St. Sergius (Bartholomew by secular name) was born on May 16 (3), 1314 to a noble boyar family. Already in his childhood godliness of parents; the boy’s own faith and purity of heart; a sincere love for God and zeal in prayer revealed for him the holy joy and the beauty of the spiritual life. For that God gave him the gift of wonder working and discovered Himself in miraculous apparitions. The image of one of such events is placed on the other side of the cross, at the bottom, under the majestic image of Christ Pantocrator. That is the Apparition of the Most Holy Mother of God accompanied by St. Peter and St. John the Evangelist to St. Sergius of Radonezh. Disciples of St. Sergius held the memory of the Mother of God visit to the Holy Trinity Monastery sacred, as well as Her promise. The icon of Mother of God Apparition was put on the tomb of St. Sergius and was venerated as a great shrine.

By means of multiple of his disciples, who dispersed throughout Russian land, St. Sergius showed an example of holy love to the world. St. Sergius reposed on September 25, 1392. Before his death, he commanded the brethren strict keeping most notably the purity of the Orthodox faith and love."