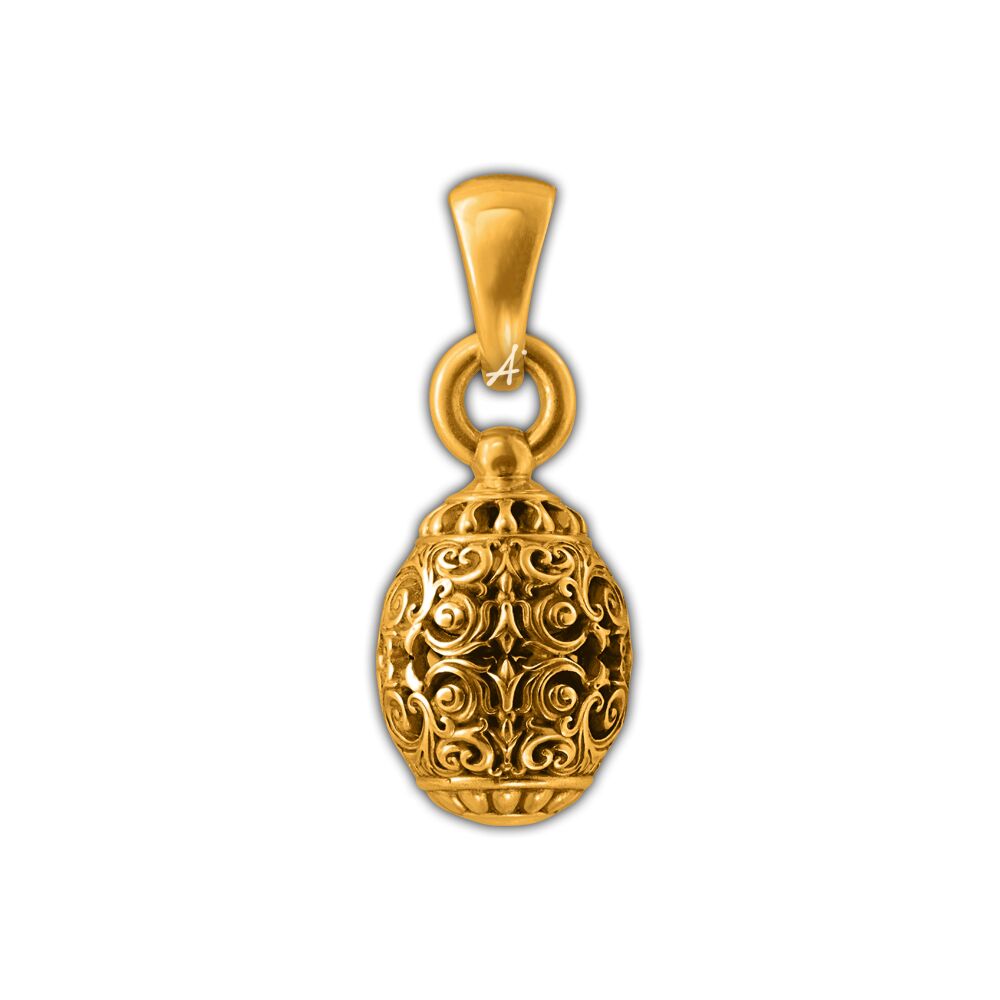 "Since apostolic times colored or painted egg has been the main symbol of the Christian Easter. According to the Tradition, it was Mary Magdalene who for the first time presented it as an Easter gift. She handed an egg to the Roman Emperor Tiberius with the words: ""Christ is Risen!"". Emperor doubted her words, professing that rather a white egg white would become red, than a human being rise from the dead. And on the instant the egg in the emperor’s hands changed the color.

The first record of colored eggs for Holy Easter is found in a Greek manuscript of the 10th century from the library of the monastery of St. Anastasia in Thessaloniki. After Easter prayers there is written a prayer of blessing eggs and cheese with an explanation: kissing the brethren, the abbot should give them eggs with the words ""Christ is Risen!"". In another Greek manuscript of the 13th century ""Nomocanon of Photius"" there is an annex: the abbot may even punish a monk who does not eat red eggs at Easter, since that is an opposition to the apostolic tradition.

Up to now, as many centuries ago, in all Christian countries the egg is a ritual Easter treat. The first thing eaten by the Orthodox Christians after forty days of Lent is a painted Easter egg consecrated on Holy Saturday. On the Eastertime the egg becomes a center of games and entertainment. People roll eggs from a hill or on the grass; bonk them together against sharp and blunt ends; compete in the beauty of paintings.

In Russia, decorating Easter eggs was a real art. Several techniques have existed since ancient times. The simplest was egg hard boiled in a color (Krashenka), i.e. egg entirely painted in one color. Dutch ethnographer and writer Cornelius de Bruin wrote in his ""Travel to Muscovia"": ""The most common color for painting these eggs is the color of blue plums, but there are green, even white, and painted very well."" The same writer tells us that before Easter hard boiled painted eggs (Pysanka) were as well sold in the markets. Those were eggs painted very artfully; on many of them ""Christ is risen!"" was written. They were decorated with bright ornamental patterns or genre paintings, ""colored grasses"", ""and birds, and animals, and people being in those grasses."" The technique of ""scratched"" picture was the most sophisticated. On red eggs, real or made of wax and wood, true icons were scratched with sharp knife. A very subtle picture was obtained, the technique being similar to eau-forte and valued very highly.

The ornamental decorating was the most ancient tradition. In ornaments of painted Easter eggs the researchers of Russian antiquities are seeking archaic pre-Christian representations of the universe of the Slavs. Since an ornament is the art reflecting the world harmony that is manifested not in the subject, but in the very structure of the figure. Ornament brings a sense of orderliness, propriety, and regularity of all that exists in the world. Therefore, ornamental patterns are present in all Christian decorations. They symbolize the fact that there is nothing accidental in God created world.

In 19th century in Russia not only natural eggs – of chicken, goose, duck, swan, turkey, pigeon – were used for coloring at Easter, but they were made of every conceivable material: of chiseled, carved and painted wood; of clay, bone, and wax; with the development of a variety of crafts and fashion of new materials they started making eggs from ornamental stone, marble, precious and semi-precious stones, precious metals; sewed from silk and velvet; from riband and threads; with gold embroidery; from seed beads; later – cast and blown from colored and colorless glass, painted and engraved; from porcelain with painting and embossing; enameled, majolica; papier-mache, cardboard; straw inlaid and finally, from sugar, chocolate, caramel. In the late 1800s – the early 1900s Easter eggs were produced already on a commercial scale.

Carl Faberge was among the first to integrate an Easter egg with jewelry. And now, his name stands for the brilliant art of Easter eggs decoration. It is due to Faberge that egg shape became widely used in jewelry. The fashion of egg-shaped ornaments remains unchanged already for more than a hundred years. Our company has also made a small collection of pendant-eggs. It includes several kinds of smaller solid-cast eggs and larger cut worked silver gilt eggs. Eggs are ornamented with a traditional pattern, some being decorated with plique-a-jour and champlevé hot enamels. Some eggs have traditional letters XB – abbreviated Paschal greeting ""Christ is risen!"", some being decorated with a short prayer: ""O Lord, save and protect me"".

The image was belabored by the artist German Pozharsky together with the team of the “Akimov” Company."