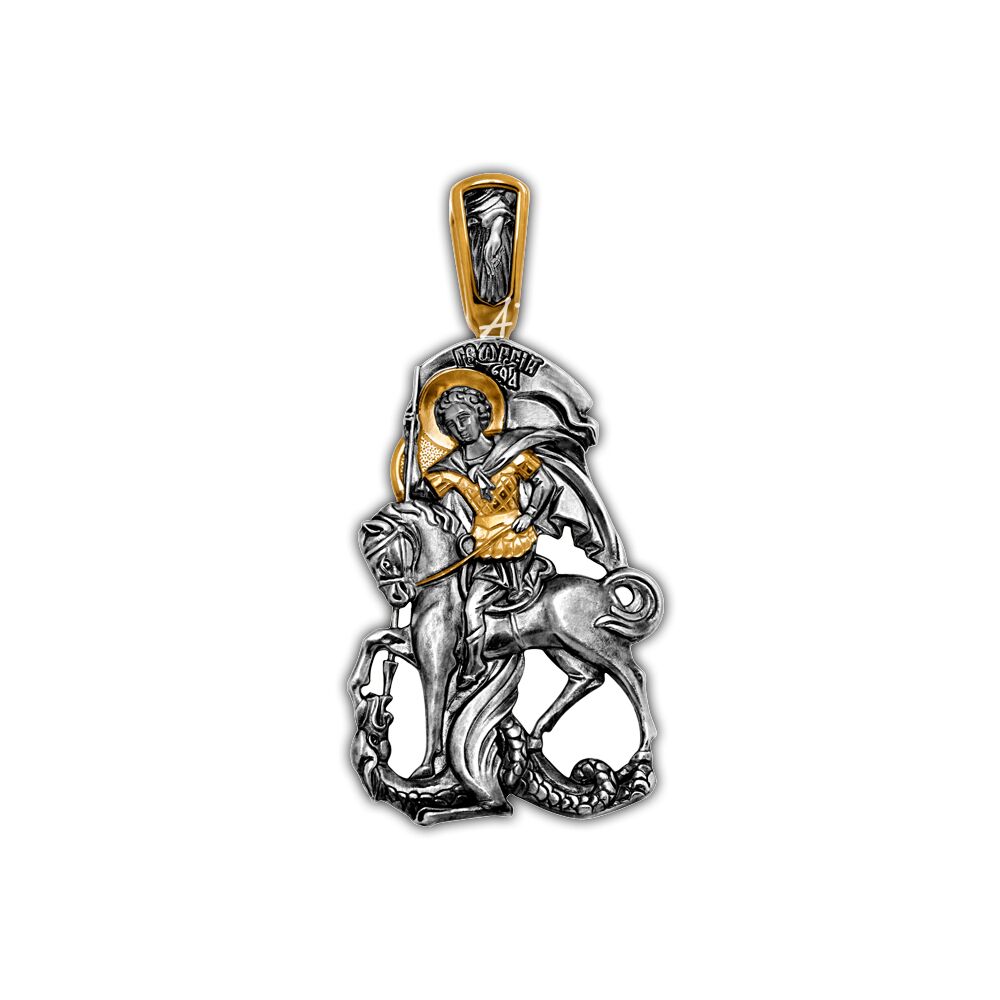 "Uncluttered and expressive silhouette of a rider slaying a dragon (serpent) and striking in its jaws with a thin spear – that is a recognizable image of St. George, the gallant and noble soldier of Christ, one of the most popular saints in the Christendom. For many nations St. George embodies the ideal defender. Epic hero fighting with a monster, global evil incorruptible vanquisher who lives in the legends and tales of any country, in the minds of the faithful has concurred with the image of the Great Martyr St. George. The saint has personified the struggle between good and evil, the triumph of God's righteousness over villainy and injustice.

St. George († 303) was born in Cappadocia to a Christian family. Noble by birth and talented young man quickly made a good military career as an officer (the high captain) in the army of the emperor Diocletian. But when Diocletian mercilessly decreed the complete extermination of Christians, George voluntarily came to the governor and made a stand for his coreligionists. Persuasion torments and long imprisonment did not break the warrior, and he was decapitated.

The earliest evidence of St. George was found in the Greek text of 368 discovered in the Syrian city of Sciacca. Here as well survived the first temples in the Great Martyr’s honor. In Asia Minor in the 5th century the first legend was composed, telling about the martyrdom of the saint.

The veneration of St. George came to Rus’ immediately upon the Baptism from Byzantium. We started naming the saint Yegory the Brave – the establisher of Russian Lands. God's messenger who carried the bright Christian ideals, who was tormented by evil Pagans became the personification of Russian nation and destiny of Russian land that threw itself in the way of the hordes of pagan steppe-dwellers who were eager to conquer, plunder and impose a tax on “rich West”.

In the 12th century there appeared the most famous iconography of the saint as a rider striking a dragon (serpent). It was in this image that St. George was referred to as the Victorious and was placed on Russian coat of arms. The name of the gallant defender of the Orthodox Church became patronymic for Russian princes who wanted to have him as a powerful patron, and also saw a sample of Christian virtue. Princes revered St. George as the patron saint of soldiers, peasants praying him of their cattle. Martyr’s name was modified in Russian manner: princes called him Yuri, peasants naming Yegor. St. George was commemorated thrice a year: on November 16, on December 9, and on May 6. Day of his repose, May 6, was called Yuri’s (Yuri’ev) and since ancient times had been celebrated with great solemnity.

There remained a lot of jewelry handiworks with an image of the saint, especially as the Victorious. George was often placed on wearable miniature icons, crosses, folding icons. A tradition of figurative and carved (here – enclosed in an lightsome frame) casting of icons had existed as early as since pre-Mongolian times. And for certain the better part of carved cast icons that have come down to us are with the image of the saint rider – George the Victorous.