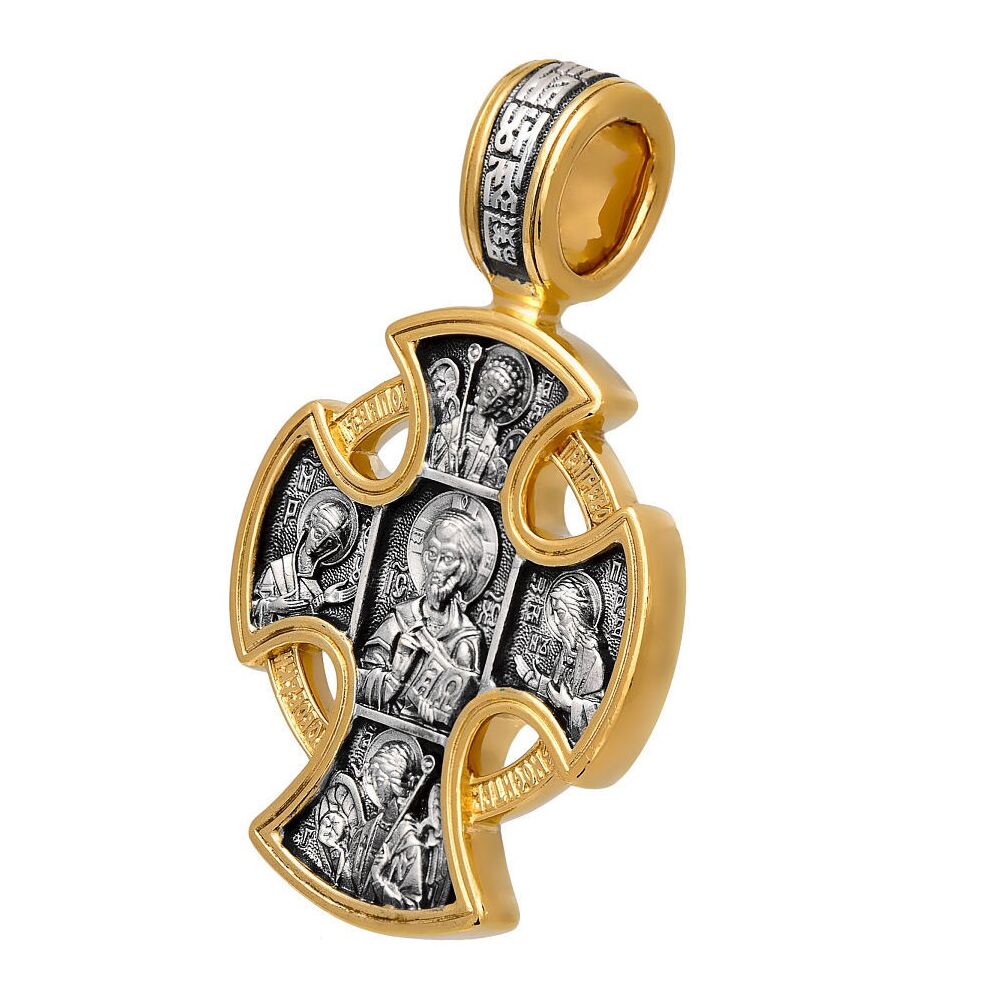 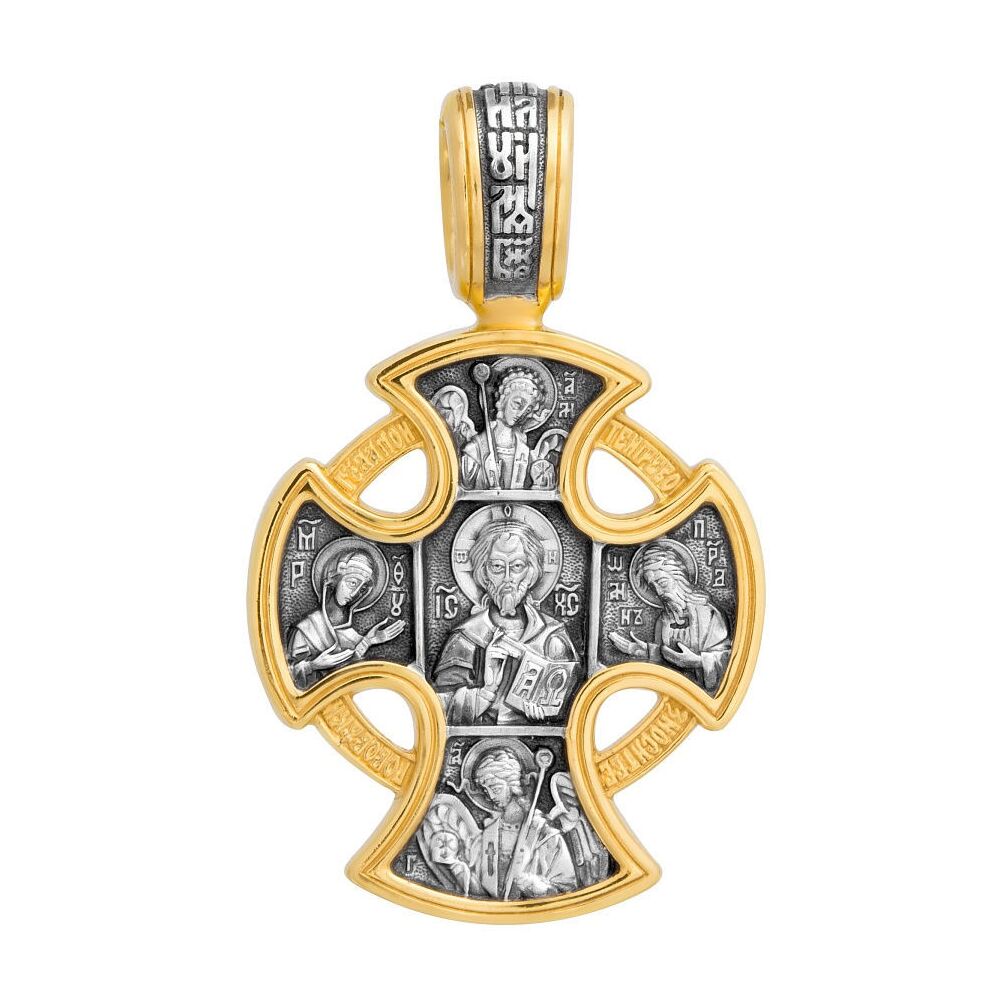 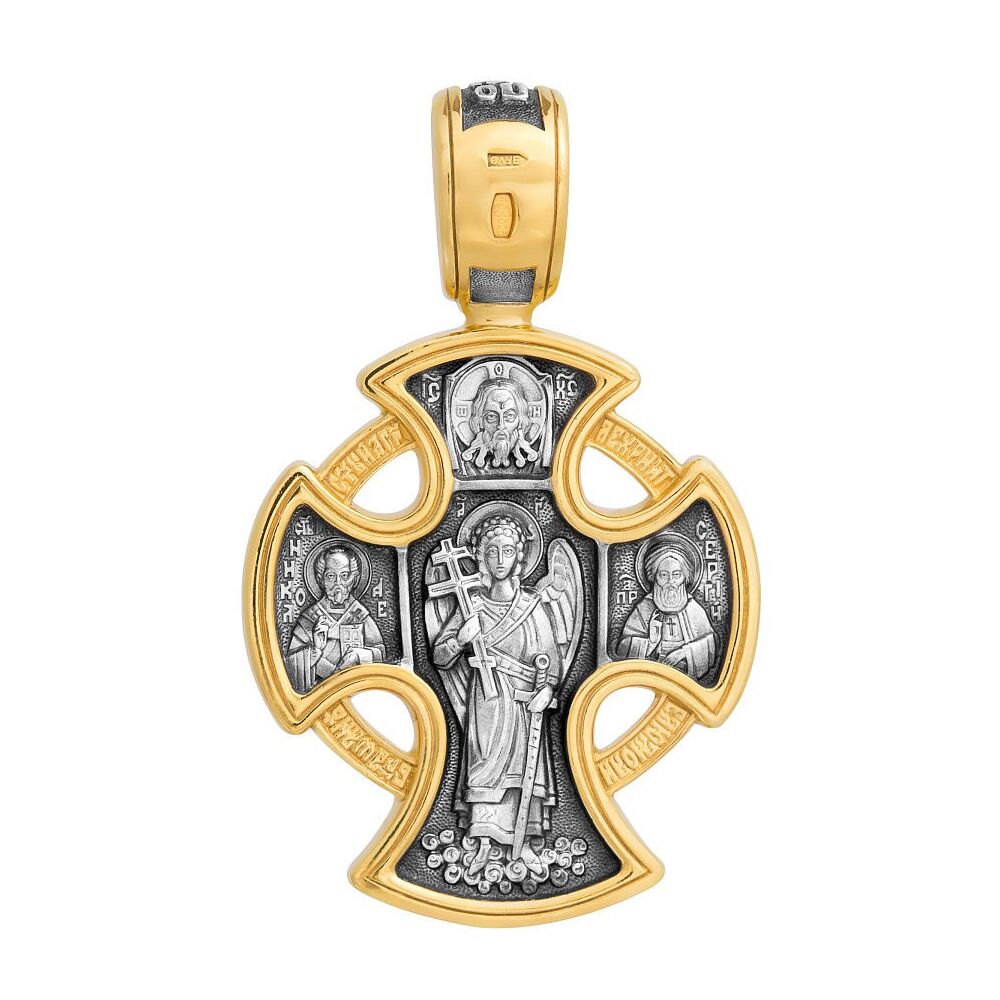 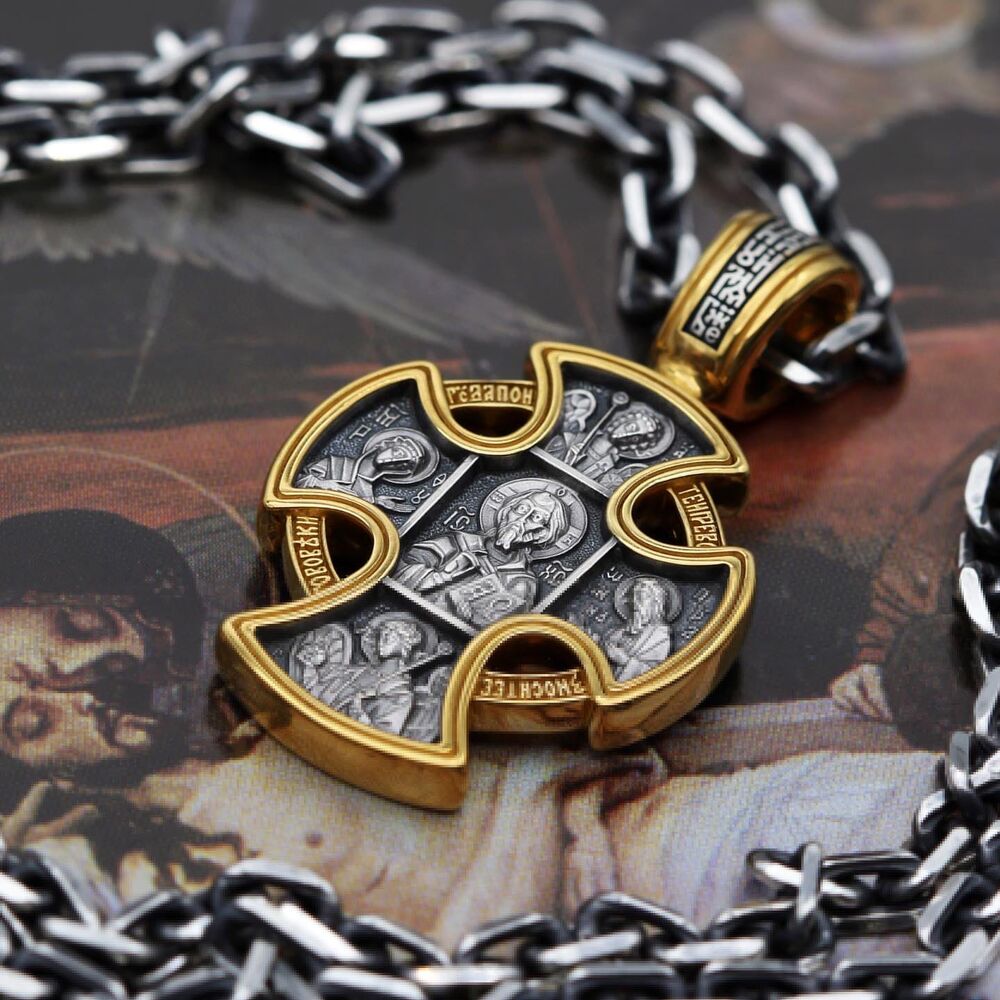 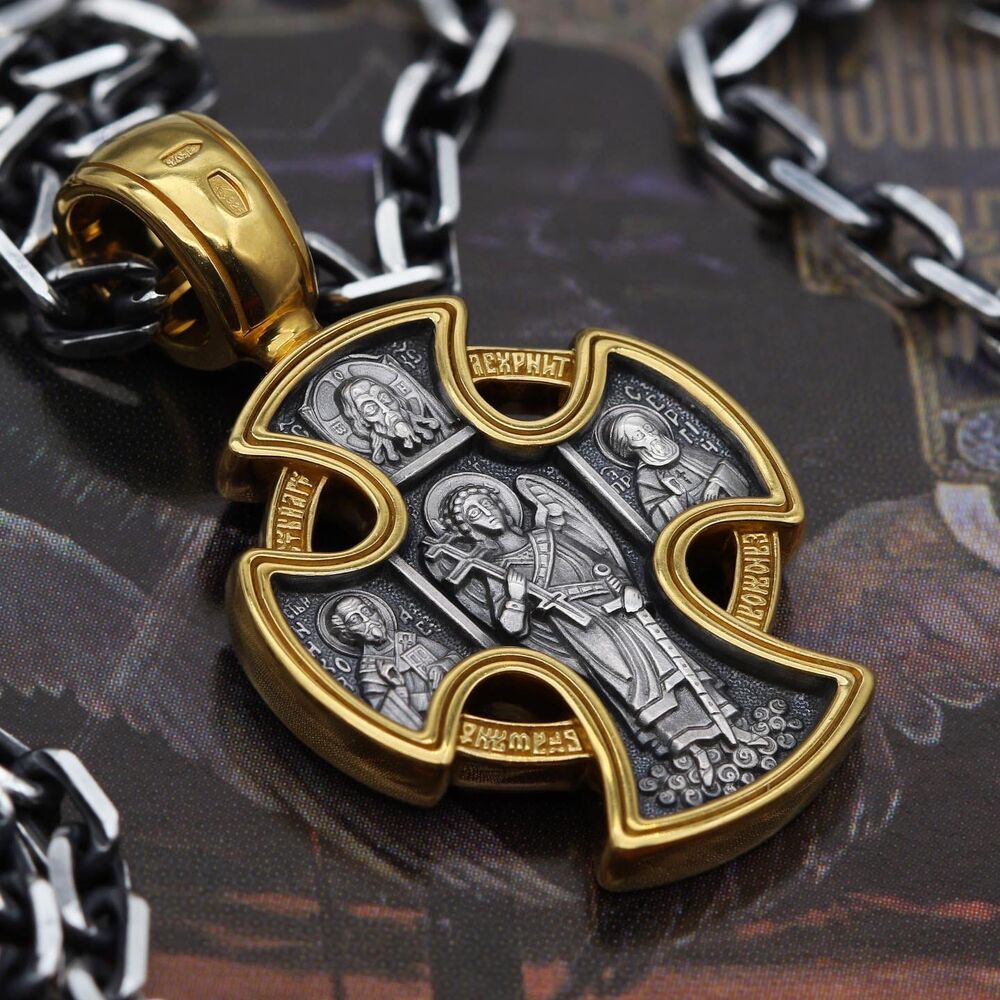 "The Cross with images of Christ Pantocrator and Guardian Angel repeats the shape of ancient crosses widespread in the North of Russia since 17th century. Simple laconic shape unites two divine signs – circle and cross. The cross signifies Christ who has been incarnated and crucified for humane sins, the circle being the symbol of God existing in Heavens, unoriginated and infinite. Such crosses are often called Novgorodian, or Celtic, since similar crosses has been brought to Russia by Celts who has adopted Christianity long before Russians. The most ancient of “round” crosses remained in Ireland. It was created in 8th century, four centuries after Irishmen got baptized by St. Patrick, and was called the cross of St. Jonas. The most ancient Russian cross of such a shape has been found in the environs of Novgorod, in Borovichi settlement.

On the cross obverse we see the Lord Almighty to whom the Mother of God, John the Baptist, archangels Michael and Gabriel bow to. The Mother of God and John the Forerunner are “above all angels and archangels” and stand nearest to God. Their icons are placed to the left and to the right of Christ icon. Archangels` images are above and below, as if following them. According to tradition the Archangel Michael is behind the Mother of God (below), the archangel Gabriel being behind John the Forerunner (above). The hands of all the saints are outstretched to God in a pleading gesture. Such a composition is called “deesis”. i.e. “supplication”. Deesis put on the next-to-the-skin cross symbolizes the prayer of the saints in heaven for the person wearing this cross. “O bless the Lord. To Him be highest glory and praise for ever” – is written circle-wise. This solemn doxology for God from the Book of Daniel (Dn. 3: 52-90) expresses the power of a creature love for Creator, joy of intimacy with Him.

Guardian Angel pictured on the cross reverse helps one to overcome ones inner sin and to follow God's Commandments. Guardian Angel is attached to the person upon christening and cares for him all his life: guards from Devil’s plots and tries to protect against sudden death for the person not to pass away unrepentant to demons` joy. In the course of one’s life Guardian Angel defends the person against malicious spirits, after his death becoming the guide in the other world. Guardian Angel image is put on the-next-to-skin cross for the person to remember of, to love and to pray to him all the time. The prayer words are written around: “Oh, Divine Angel, invoke God's mercy for me!”

In spiritual battles one is as well helped by God's saints. Two of them – St. Nicholas the Wonderworker (to the left) and St. Sergius of Radonezh – are pictured on the cross.

St. Nicholas († 342), diocesan of the city Myra in Asia Minor, is worshipped in Russia more than other saints. During his life the Saint subdued storms, healed invalids, prophesied future, and time and again relieved the destitute miles away. He cared diligently of the spiritual development of congregation that God entrusted to him. He supported people with his prayers, helped, saved and bestowed great charities. Able he was to stop executioner hand, to give gold to an indigent father for daughters` wedding, to heal a moribund with his prayer. (Сommemorated is on May 22 and December 19).

Beside him on the cross St. Sergius of Radonezh stands († 1422). The saint started his way to God as an anchorite in impenetrable forest of Radonezh not far from Moscow. He founded a monastery that became the spiritual center of Russia, wherefrom the great elder preached the love commandment as the basis of church unanimity and universe integrity. He said that mundane Church is God arranged in His own image: like the Holy Trinity is unified in Unity by perfect Divine Love, so should the peoples on the earth live in love like one person. But such love does not spring up in one’s heart by itself: it is inflamed by God, that is, in church. (Commemorated is on October 8 and July 18).Next-to-skin cross is not only a person robust guard in the world full of evil and falsehood, but it is also a sign of his baptismal vow to God of avoidance of all kinds of evil and living in accordance to Christ commandment of love. The Lord says «If any man will come after me, let him deny himself, and take up his cross, and follow me”. (Matt. 16, 24). Cross is great and victorious weapon for our salvation, holy symbol of Christendom. “Neither for an hour, not for a single moment should we, Christians, leave it”, as St. Ephraem the Syrian (†373г.) says, “but carry it everywhere whatever doing. Whether sleeping or staying awake, or working, or eating, or drinking, or heading for, or sailing, or getting over river – should we embellish all our limbs with vivifying Cross”."