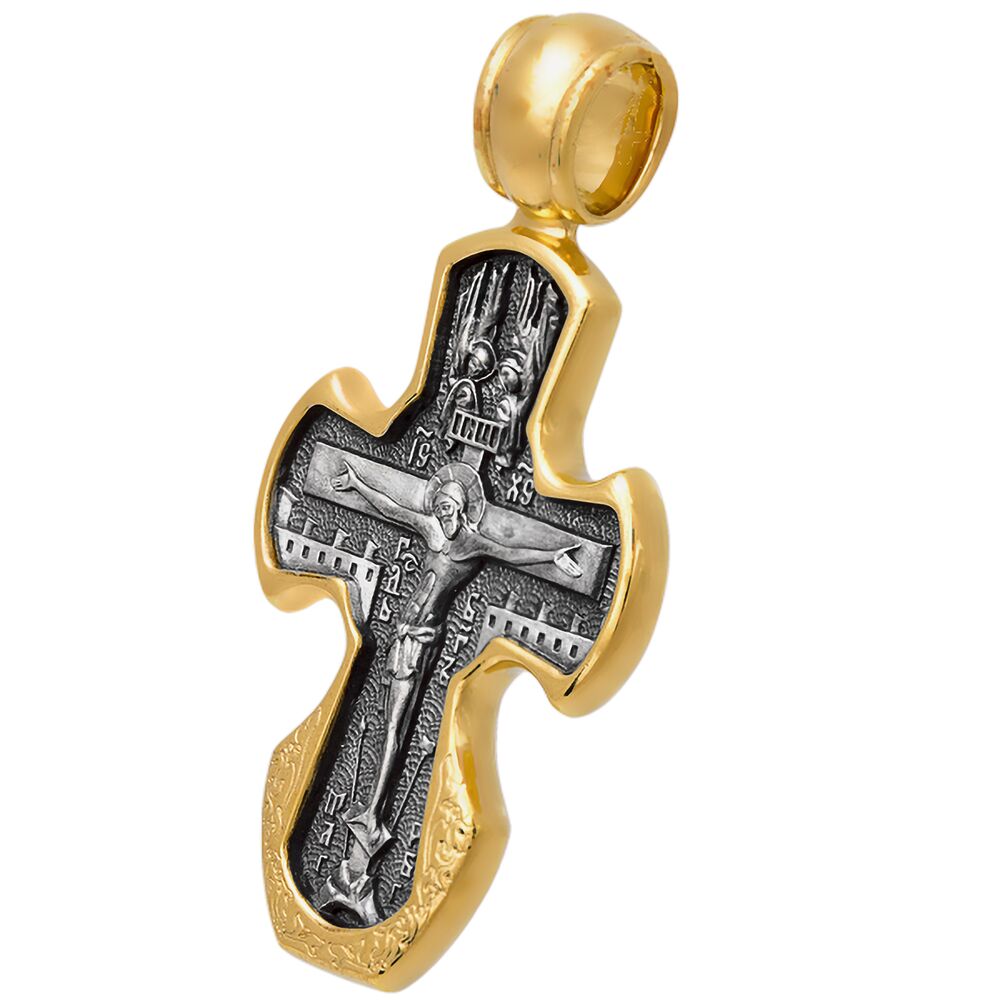 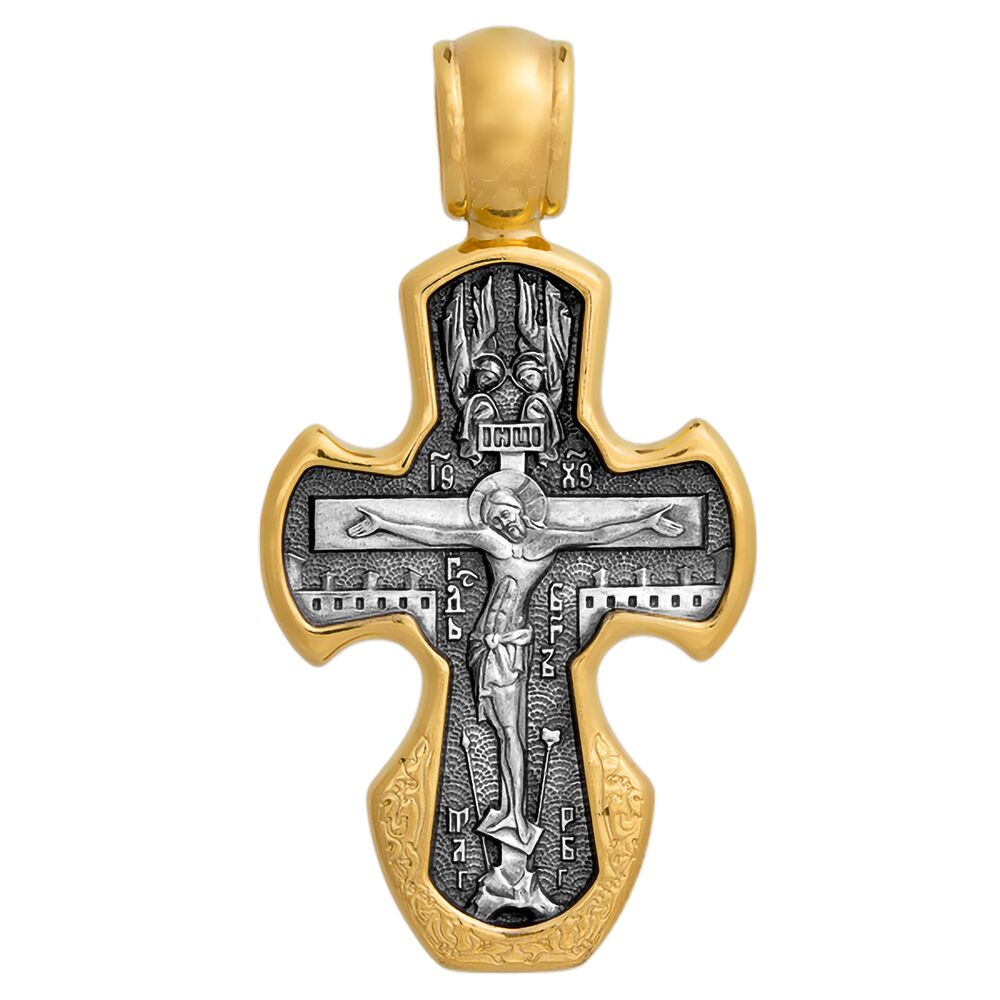 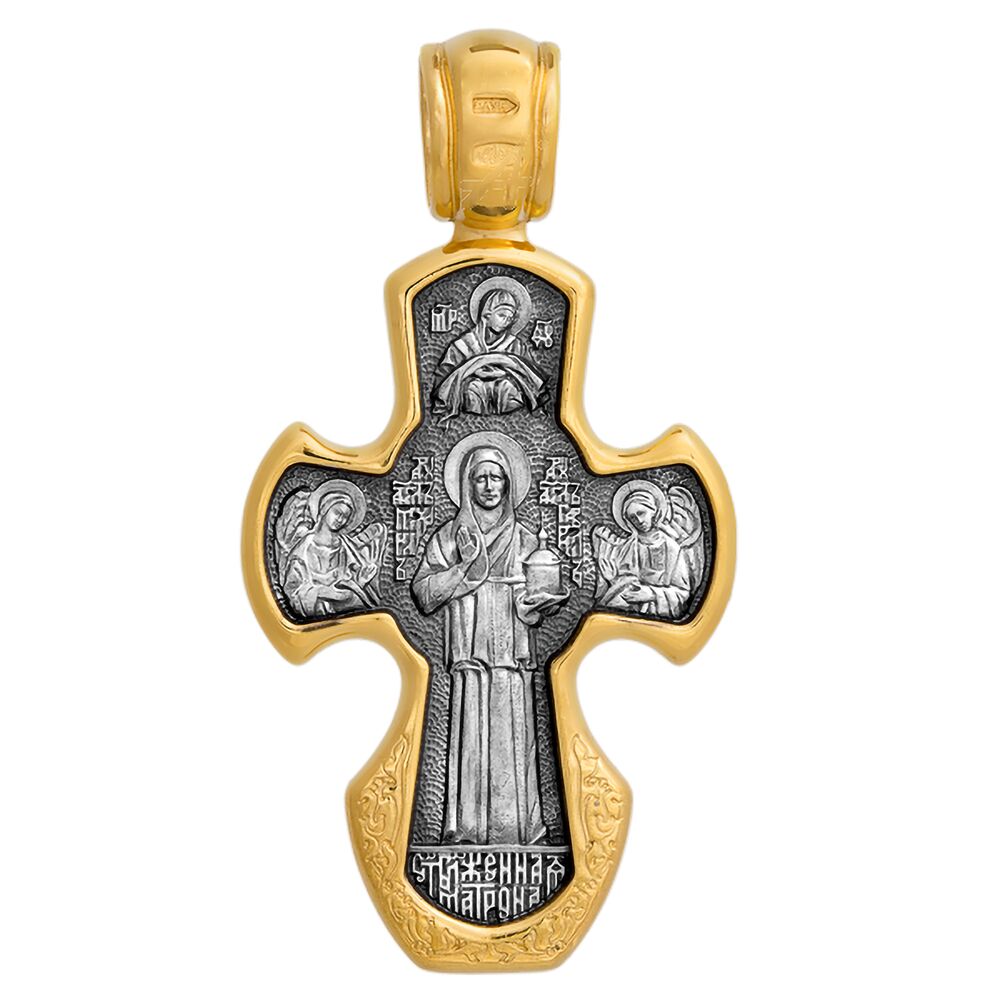 "The obverse of any next-to-skin cross is always devoted to our Lord Jesus Christ. Most often that is the image of crucifixion of the Lord. The given cross as well shows us the crucified Saviour. On the reverse we see the image of one of the most revered Russian saints – Matrona, the Blessed Eldress of Moscow.

The Crucifix presents the image of the Lord lifted up to the cross. The Son of God, Eternal and Omnipotent by nature, human being, became impotent, liable to sicknesses and death. Being unsinful He took all sins of all mankind upon Himself, and expiated them through terrible torment on the cross. Not only the Lord suffered, but also did God the Father, Who sent His only-begotten Son to torture and doom, all angelic hosts weeping by the cross. Crying angels flying from heavens are often imaged near the Crucifix. But the Orthodox Crucifix never shows Christ feeble, abased, bleeding profusely. The Lord, crucified and demised, is in a remarkable manner alive in the death itself. Christ’s body does not hang down from, but solemnly rests upon the cross. The Saviour is as if gazing at His creatures from a height and embracing them with love. Looking at the Orthodox Crucifix we always know Christ not only to die for human’s sins, but to arise, granting eternal life to everyone who loves Him! God arose, and death had been trampled down. Therefore, near Christ’s initials on the cross there’s written “NIKA”, which means “victorious”, and at the cross foot we see four letters МЛРБ – Лобное Место Рай Бысть (Calvary is Kingdom of heaven now).

No adversity or sicknesses that human being is faced with can demolish joy of living in unity with God. Life is gift of God, and afflictions are sent to people God's will for one’s soul to be raised for eternal life. The saints, especially the Blessed Matrona, Matronushka (1885 – May 2, 1952), had a good knowledge of that. She was congenitally blind, and at her seventeen all of a sudden lost the use of her legs.  But Matrona never repined at her ailments accepting adversity with humility. From a girl she loved divine service and brought light and joy to the world. In return the Lord bestowed the girl a gift of seeing human hearts and thoughts, of prophesying, and healing. At age of seven her talent came to light and Matronushka in all humility started bearing new burden, seemingly intolerable for a child: she started receiving the afflicted and sick persons. By the prayer of the Blessed Eldress some of them were healed, the others being comforted in affliction.

After the revolution of 1917 the saint became persecuted. In the course of thirty years the Blessed Matrona was moved from one address to another, being hidden from authorities. Often she resided at malignant conditions, without space heating and even water. But having no eyes, legs and home, she always possessed joy and love in her heart and went on receiving suppliants. People went to her from everywhere with their troubles, mental and bodily pain.  She refused aid nobody, and never took any fee, demanding only faith in God and correction of sinful life.

The Blessed Eldress found her last earth-house at the station Skhodnya near Moscow. On May 2, 1952 she fell asleep in the Lord. In her deathbed the Mother said: “Everyone, everybody come to me and tell of your troubles, as if I were alive. I shall see and hear and help you.”