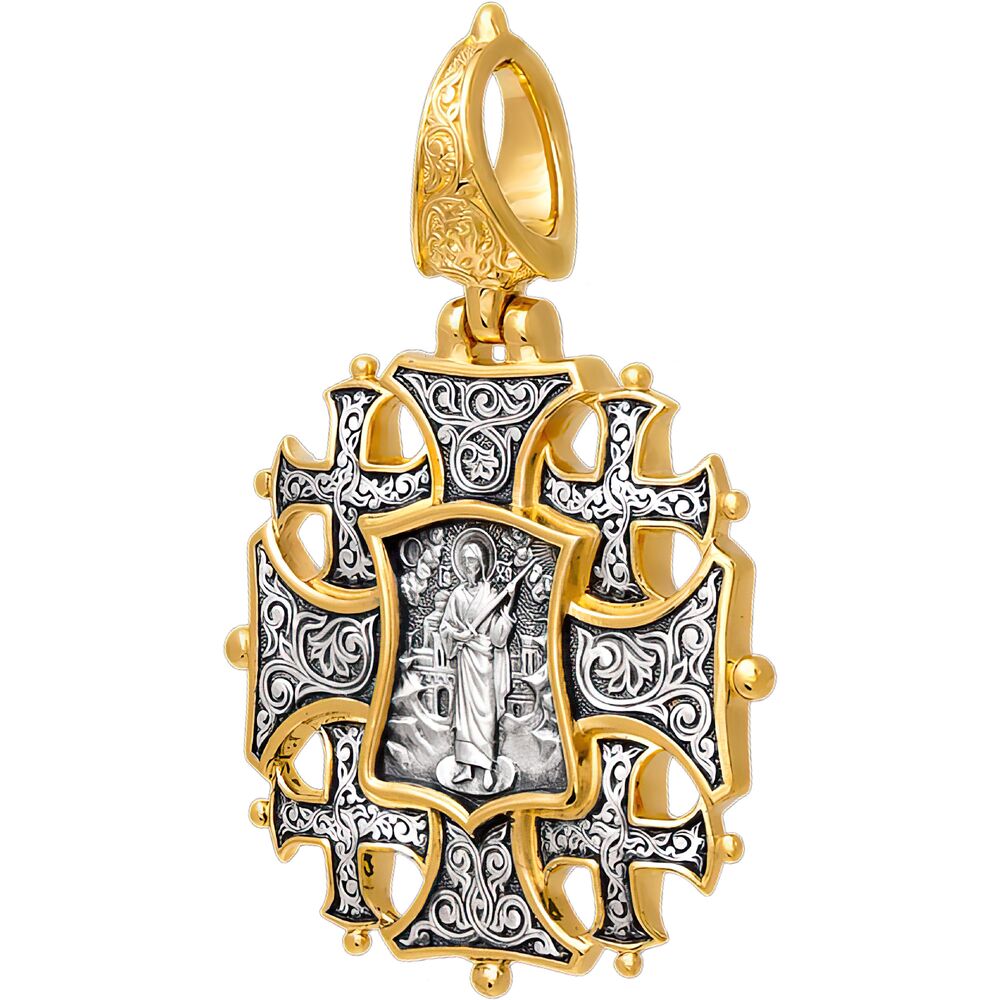 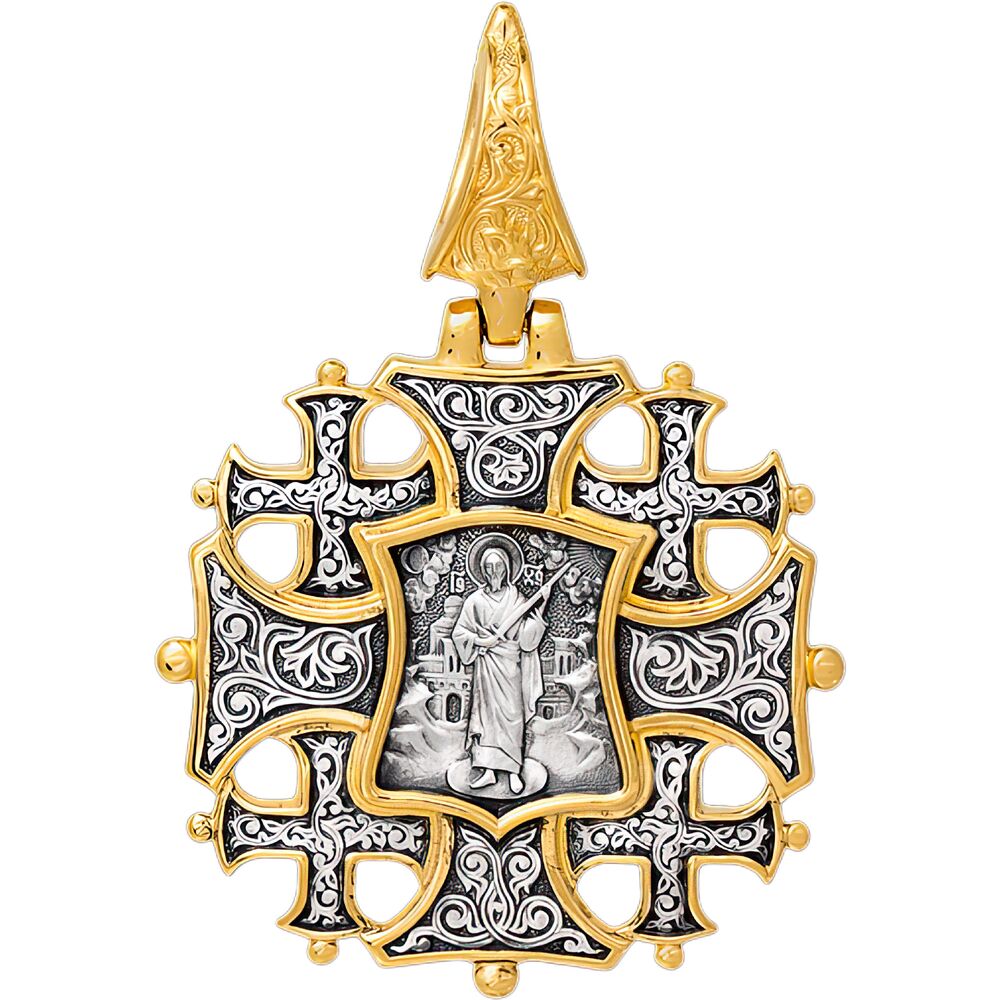 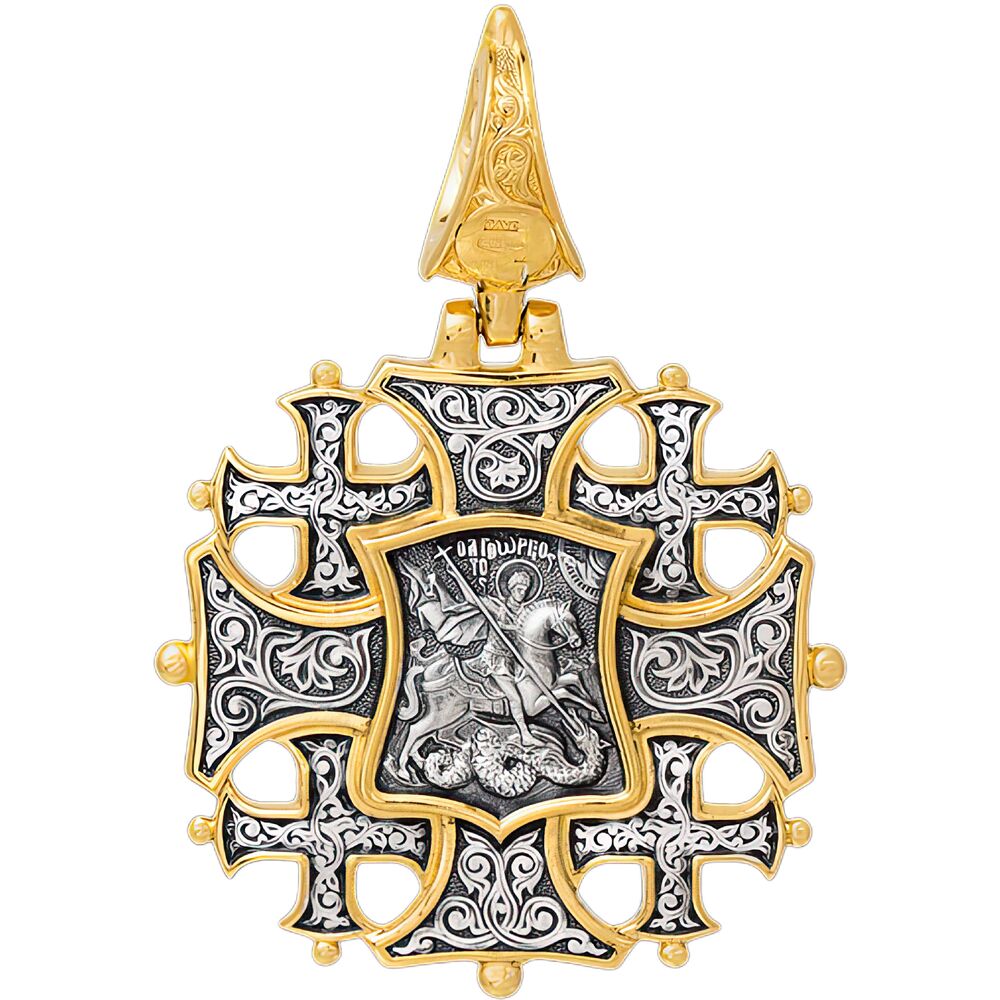 "The cross obverse shows the icon ""Christ with the sword."" Full name of the image is ""The Savior Pantocrator with a sword truncating sins."" The earliest image of the kind was preserved in Serbian monastery of 15th century Visoki Dečani in Kosovo. The image was created to the Gospel words: ""Do not think that I came to bring peace on earth; I did not come to bring peace, but a sword (Matt. 10. 34-39)."" St. Nicholas of Serbia (Nikolaj Velimirović) explains this gospel metaphor in that way: ""I came not for reconciling truth and falsehood; wisdom and stupidity; good and evil; truth and violence; morality and bestiality; chastity and depravity; God and mammon. No, I brought the sword to cut and separate one from the other for avoiding confusion."" This separation can be done only by the Sword of Truth, which is God’s word – in the Scriptures it is named square-on a good many time.

«Savior with Sword. St. George the Victorious, the Great Martyr»The cross reverse shows St. George the Victorious, the Great Martyr († 303) – one of the most venerated saints of the Christendom. He has hailed from the Palestinian town Lydda (now it is Lod between Tel Aviv and Jerusalem. Here the tomb of the saint is located, above which the church has been built. Inside the church the martyr fetters are fastened to one of the columns.

St. George, the Great Martyr was a military commander in Rome. In the years of Diocletian’s persecution against Christians he declared himself to be a Christian and voluntarily took incredible torments. In dungeon the Lord Himself came to the martyr, put a crown on his head, and heralded his earthly sufferings to be completed. The next day the martyr was decapitated. But wonders continued. The most renowned posthumous wonder by him was to save Libyan princess Elizabeth from dragon.

Since antiquity this wonder is interpreted in Orthodoxy in symbolical way. All the narrated has inner spiritual meaning. The lake and the dragon mean the Underworld and the devil, the princess being a human soul, the citizens representing miserable sinners that destroy it voluntarily. Not by accident St. George does not kill the dragon but strikes its tongue: it is by oily tongue, blandiloquences and spurious fears, that demons catch one’s attention, creep into one’s soul and destroy it. These are we who should ourselves triumph over our sin and get our soul liberated from it.

The saint helps you to struggle temptations, he overcomes demons but does not exterminate them. Therefore St. George orders the princess to tie the dragon herself, to lead it to the town and to kill it their together with the inhabitants. It is only you who must fight off your sin and free of it.

The cross has a Jerusalem iconography, pentanomiality being its hallmark: large central cross potent is surrounded by four smaller plain crosses, one in each quadrant. On each potent there is written the name of the Holy Jerusalem. Such cross symbolizes the Holy Land. In pilgrimages to Jerusalem there exists a tradition of apposing crosses to the Holy Sepulchre. Such a cross may also be sanctified in New Jerusalem monastery near Moscow, being apposed to the local shrines.

Being the symbol of the Holy Land the Jerusalem cross is venerated both by Catholic and Orthodox Christians. Catholic Church honors it as the symbol of victories if first Crusades. In Orthodoxy it is hollowed as the ancient symbol dating back to the cross of St. Constantine the Great that appeared before him in the sky. Jerusalem cross looks like the Constantinian cross but is complemented by four smaller crosses. That likens it with the Orthodox five domes and conveys the same spiritual meaning. That is the image of Christ surrounded by four Evangelists as well as the symbol of synodical unity of the Orthodox Church, since according to the canon the Ecumenical Council of Orthodox Churches should include not less than five patriarchates.

In ancient times Jerusalem Cross was very often represented on flags. It had decorated flags of Byzantium, Armenia, Russia, of the Christian peoples of the Caucasus and Northern Anatolia. Jerusalem Cross can still be seen now on the national flag of Georgia, as well as on annalistic pictures of banners of the first regular regiments of medieval Russia."