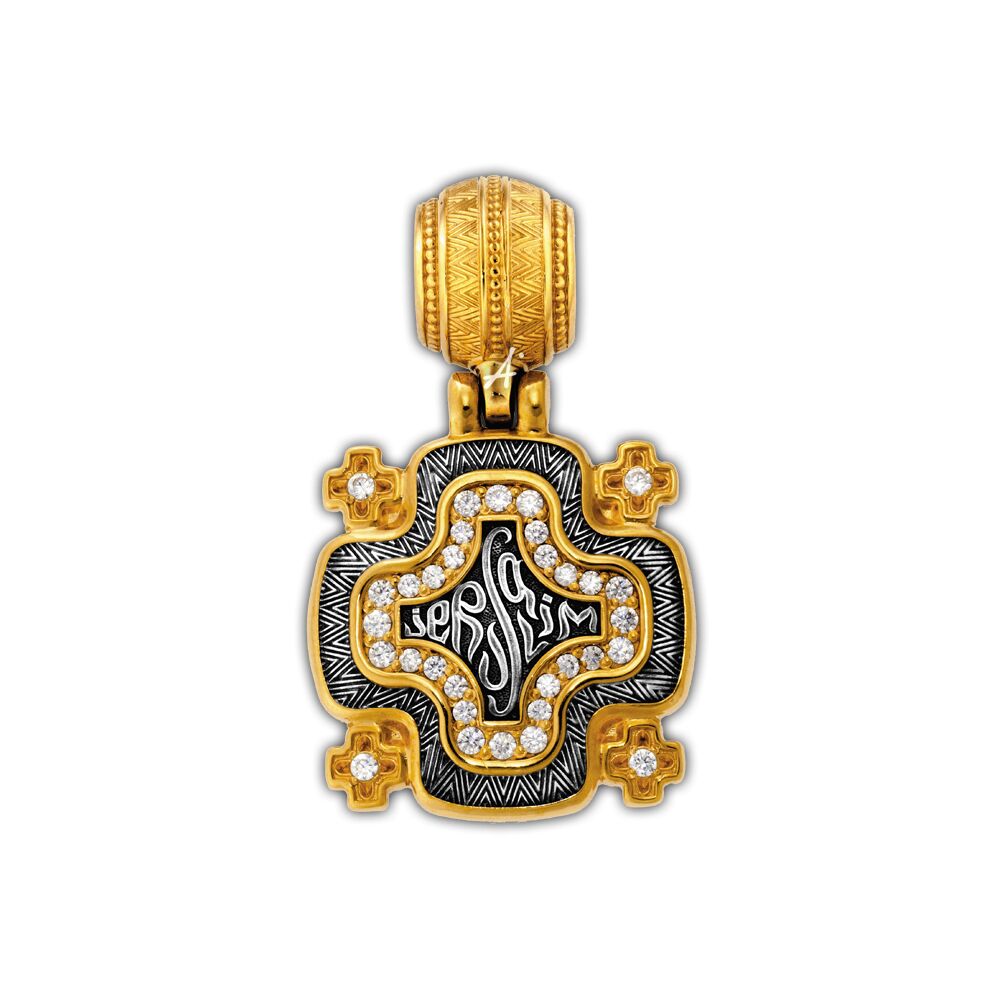 "Ornamental Jerusalem Cross, on either side of which there is written JERUSALEM – the name of city holy for every Christian – is a festal cross usually wearable over dress. The cross obverse is decorated with 32 brilliants. Tradition of wearing festal crosses (in contrast to next-to-skin ones) not under but over dress is of very ancient heritage. Such crosses put over national garments can be seen on pictures of Russian peasants in the beginning of 20th century. The tradition was broken only in Soviet times in the context of persecution against the Church.

The iconographic hallmark of the Jerusalem cross is its pentanomiality: large central equilateral cross is surrounded by four smaller ones. Such cross shape is a symbol of the Holy Land. This Cross is thought strange for the Orthodox Christians. It is called the ""Crusaders' Cross"" and is attributed just as an emblem of the Catholic military Order of the Holy Sepulchre. However, this point of view is incorrect. Five-fold composition of the Cross appeared in the East long before the Crusades, and was one of the most important symbols of the Eastern Christian civilization.

For centuries two cross images were venerated in the Christian world – the True Cross of Christ, which the Savior had been crucified on; and the cross, which miraculously appeared in the sky to St. Constantine the Great, Equal-to-the-Apostles, before the Battle of the Mulvian Bridge in 312 where he won a decisive victory. The Constantinian cross had a regular equilateral shape and was a symbol of protection and victory. Additional signs were often placed between the beams of the Constantinian cross in the illuminations of sacred books, in the church embellishments, and in color cloths. Those were Evangelists’ symbols, Christ’s initials, and symbolic cuts or just crosses, rays or stars. Such characters completed the meaning of the image, assigned new aspects of perception, permitted sacred shape to be interpreted deeper, not only as a historical relic, but as having deep and sacred meaning. For example, the Constantinian cross complemented with four smaller crosses represents the projection of a cross-in-square Orthodox Church. Like a five-domed Orthodox Church it symbolizes Christ and the four Evangelists, as well as the spiritual unity of all Christians of the four corners of the earth.

All countries of Eastern Christianity belonged to the Byzantine world, i.e. their churches, being independent, recognized the primacy of the Patriarch of Constantinople and the Byzantine Emperor. According to the canon the Ecumenical Council of Orthodox Churches should include not less than five patriarchates. Therefore four smaller crosses around the larger central on the flags of the Eastern Christian states symbolized the synodical unity of the Orthodox Church, rallied round Constantinople.

Jerusalem Cross was very often represented on flags. Since ancient times, it had decorated flags of Byzantium, Armenia, Russia, of the Christian peoples of the Caucasus and Northern Anatolia. Jerusalem Cross can still be seen now on the national flag of Georgia, as well as on annalistic pictures of banners of the first regular regiments of medieval Russia."