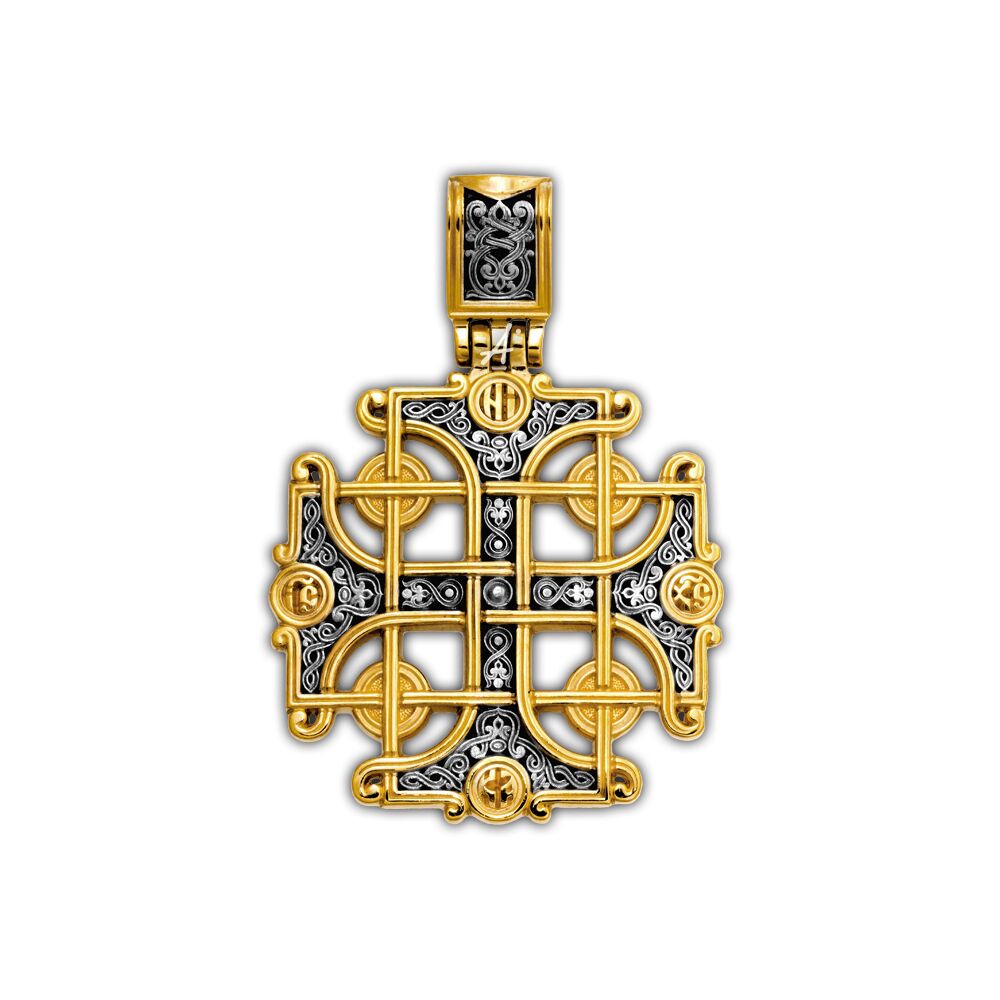 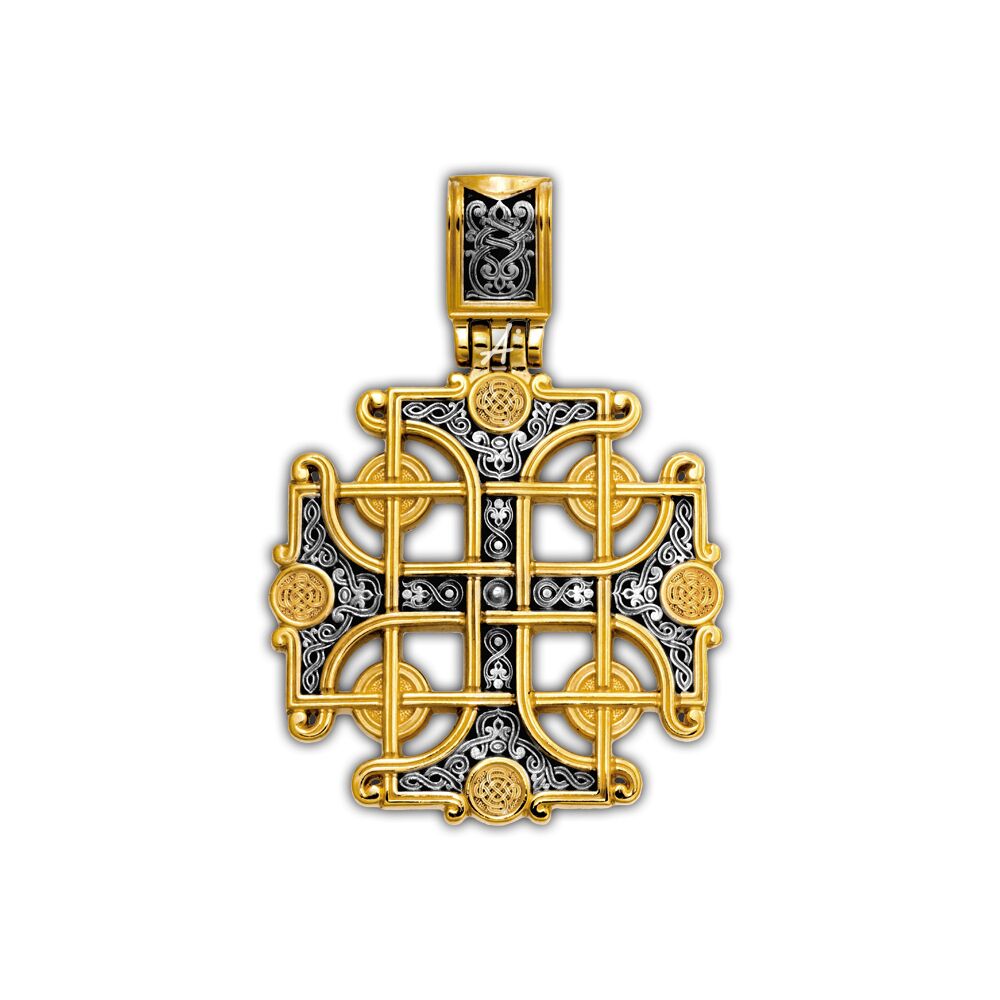 "Equilateral cross with circles between bars wherein written are the initials of Christ’s holy name “ИС ХС” and Greek word  “НIКА” (overcome), in its iconography dates back to the victorious symbol of Christianity  — to the cross of St. Constantine, Emperor Equal-to-the-Apostles.

«Constantinian Cross»For centuries two cross images were venerated in the Christian world – the True Cross of Christ, which the Savior had been crucified on, and the cross, which appeared miraculously to St. Constantine the Great, Emperor Equal-to-the-Apostles in the sky before the Battle of the Mulvian Bridge. The True, or Calvary Cross was elongated and had two or three cross bars. This shape carried the symbolism associated with the propitiation and Christ’s sufferings. The Constantinian cross had a regular equilateral shape and was a symbol of protection and victory. These both crosses became available to Christendom much at the same time, but the Constantinian one that is associated to the evangelization of the world was the first.

After Crucifixion, Resurrection and Ascension, Christ’s followers were chased and persecuted for three centuries throughout the vast territory of the Roman Empire: in Europe, Asia Minor and North Africa. Christians were cruelly tortured and killed, and under the Emperor Diocletian, who reigned from 284 to 305, they were at all started being orderly exterminated, which was aimed to sweep Christianity away. Diocletian’s mantle fell on his successors – two co-regents, whom the emperor left the huge country. And unknown it is how that genocide monstrous in its scope would have turned out, if at 306 Constantine I nicknamed the Great by the descendants, did not become the co-regent of the emperor Maxentius. Like all Roman emperors, Constantine was a pagan. But unlike the others, he was tolerant, thought it unnecessary to be rendered divine honors, and was not eager to kill those who refused to do so.

Two rulers made war. The decisive battle took place at Mulvian Bridge in 312 and was won by Constantine. On battle eve Constantine and his warriors saw a sign on the sun – crossed initials of Jesus Christ (chrism), next to which there shined an equilateral cross and an inscription ""with it you overcome."" In the dream, the vision was repeated, but this time, the emperor saw only the cross. He ordered this cross to be placed on the banners of his troops and won the battle. Having come to power Constantine declared Christianity an official religion, and was baptized before death.

The Constantinian cross was placed on standards, used as church decorations, and worn as next-to-skin crosses.  Cross bars mostly had extending ends or small potents. Between them there were often placed additional signs – Evangelists’ symbols, Christ’s initials, and symbolic cuts or just crosses, rays or stars. Equilateral crosses with circles, the word ""NIKA"" and Christ’s initials were the most common. They are preserved on the vaults of ancient temples, on coins, jewelry, stamps. Such compositions had been especially common in Palestine, and they provided the basis of the heraldic symbol of Jerusalem after it was captured by Crusaders. Much about the 13th century there appeared the Jerusalem cross: it consisted of one larger and four smaller equilateral crosses, and was placed on the coat of arms of the Knights of the Holy Sepulcher and the gonfalon of the Kingdom of Jerusalem.

Now the cross including five ones – a larger in the centre and four smaller in the corners – is as before named Jerusalem cross, and is equally venerated both by Catholic and Orthodox Christians.  These are such crosses that in pilgrimage to the Holy Land are traditionally apposed to the Holy Sepulcher for sanctifying."