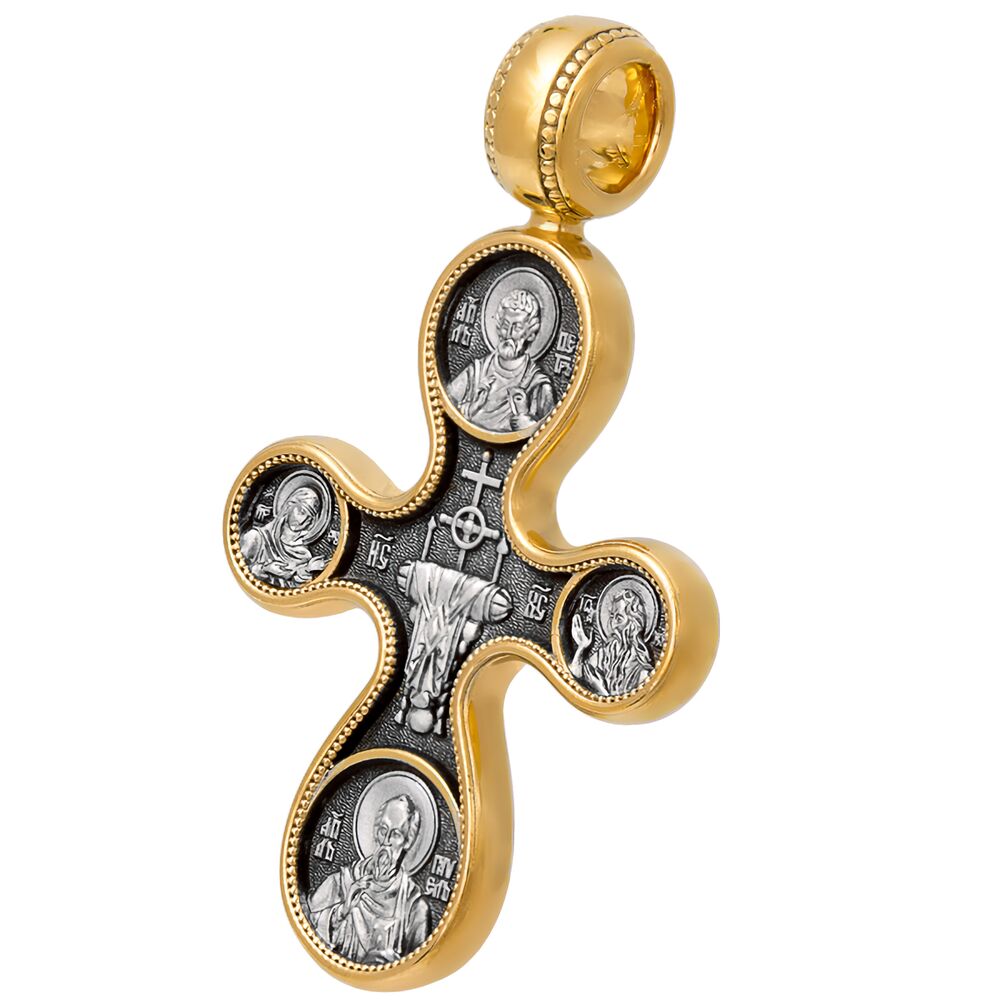 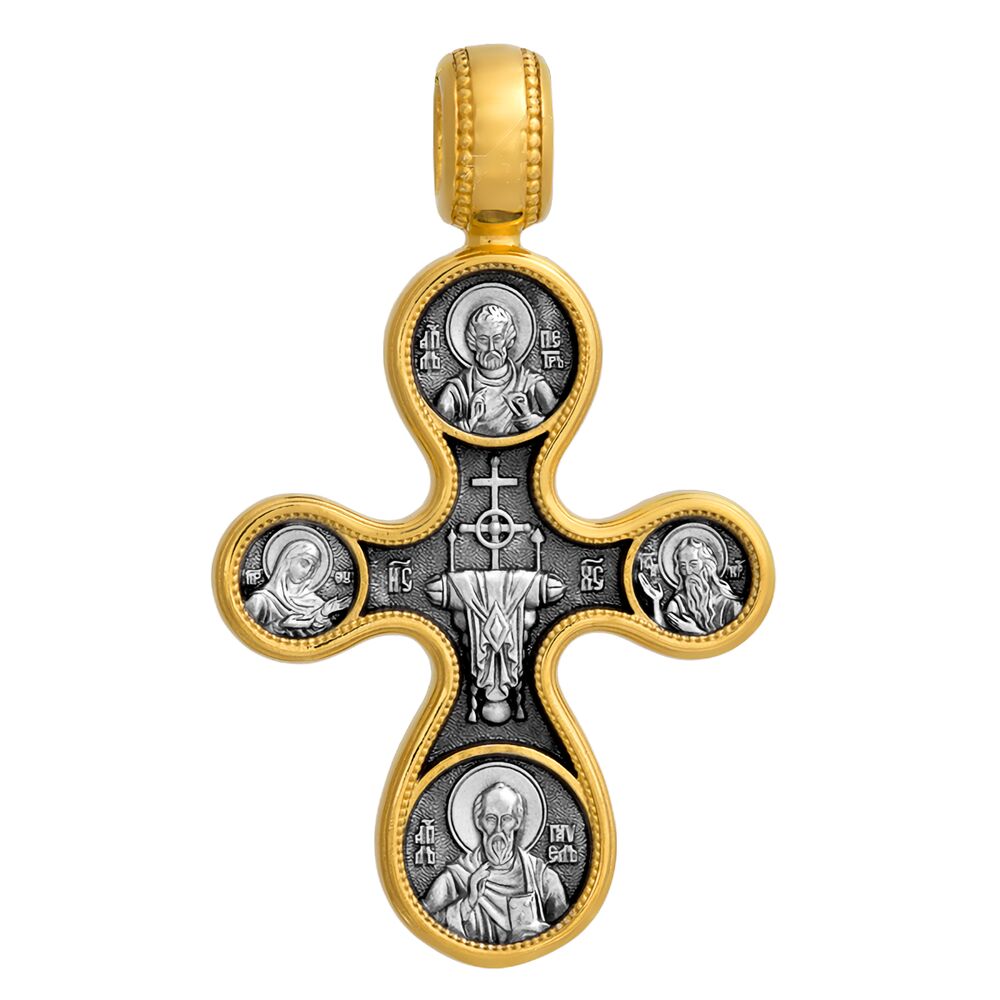 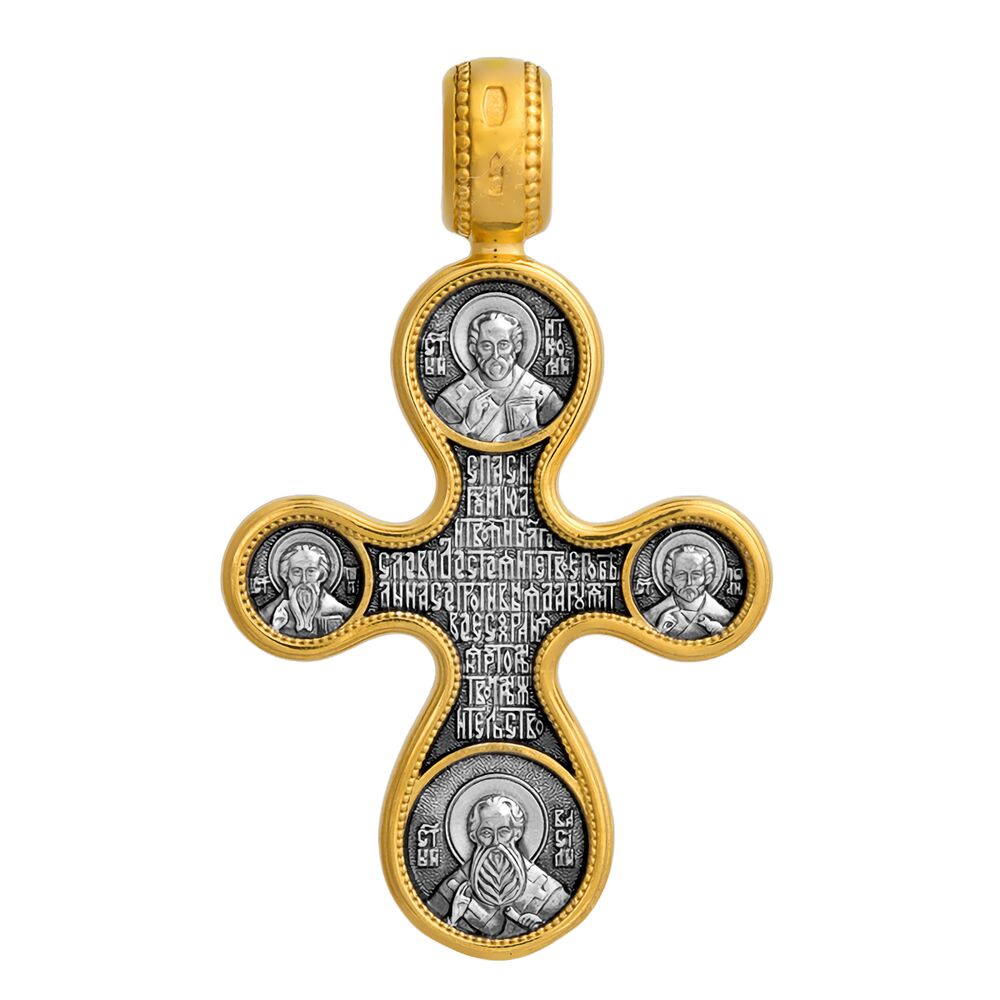 "A next-to-skin cross with rounded ends of crossbeams, having circles with icons of eight saints. Such a cross is traditional for Russian Orthodoxy. In 15th – 16th centuries this type of cross was of one the most widespread. Etimasia – a symbolic image of Christ Pantocrator sitting down on the Prepared Throne – was often located in the center instead of crucifix.

Etimasia is readiness in Greek. Etimasia is usually put to the center of compositions devoted to the Doomsday, often on the icons upper field and on the next-to-skin crosses; representing God’s Throne prepared by the Lord for the Dread Judgement when He would mount thereto, open the Book of Lives and start judging the quick and the dead.

On both sides of the Throne the Most Holy Mother of God and John the Baptist intercede, with their arms lifted up in prayerful reference. According to the Church legend they will advocate people before God at the Doomsday. Above and below there are icons of prime Apostles Peter and Paul.

According to evangelic Legend Jesus Christ called Simon to be His disciple, and named him Peter (stone, in Greek) for his strong belief in Jesus being the Son of God. Gospel tells that it was Peter to whom Christ entrusted key to paradise. Apostle Peter became a symbol of faithfulness, Apostle Paul being a symbol of faith. Paul first named Saul, was a cruel persecutor of Christians, and was always present at executions thereof. But once on his way to Damascus he was all of a sudden blinded by Divine Light, and heard a voice: ""Saul! Saul! Why are persecuting me?” Saul asked: ""Who are you, Lord?” The voice replied: “I am Jesus persecuted by you” (Acts 26:13-18). Those words changed the life of Apostle. He adopted Christianity, and took a new name of Paul. During his life Apostle Paul wrote multitude of epistles, visited dozens of cities, and converted thousands of people to Christianity. By one version both Apostles were killed the same day – Peter was crucified head foremost, Paul being beheaded. By the other both saints were killed on July 12, but one a year later than the other.

In the reverse center there is the prayer: “O Lord, save thy people, and bless thine inheritance. Grant victory over their enemies to Orthodox Christians, and protect Thy people with Thy Cross”. On either side of the prayer images of the greatest Holy Hierarchs are located in circles, symbols of eternity.

Above we see the icon of St. Nicholas, the Wonder maker. The Holy Hierarch Nicholas (second half of 3d century) is the greatest and the most worshipped saint in Russia. He is invoked for protection by all who are in need and in affliction, and those who are condemned innocent. He helps students and travelers, sailors and merchants, he heals the sick persons, pacifies the enmity, finds the missed and even raises from the dead. He is commemorated twice: on December 19 (6) – the day of his passing away; and on May 22 (9) – on the day of his relics` transportation from Asia Minor to Bari (Italy) where they rest now.

The Universal Church venerates the Holy Hierarchs St. John Chrysostom (on the left), St. Basil the Great (below), and St. Gregory the Theologian (on the right) together, as Sts. Peter and Paul, the Apostles. Three great saints are worshipped as creators of Liturgy that is being officiated at all the Orthodox churches, and are in a grand manner named Three Cappadocian Fathers.

St. Basil the Great (330-379) was famous for his scholarship, deep knowledge of the Holy Scripture, and labors for the benefit of the Church peace and solidarity. For his labors in spiritual construction of Church, and development of theology he was named the Great.

His bosom friend St. Gregory the Theologian (326-389) was named so for за outstanding works, for ability of getting to the bottom of the most deep mysteries of belief, and putting incomprehensible truths into quite clear and exact words. In one of prayers Church calls him the man of the highest sense.

St. John Chrysostom (347-407) got his nickname for uncommon gift of God-inspired eloquence. For twelve years the saint daily preached in church, shaking the hearts of listeners. He wrote the commentaries on many books of the Holy Scripture, numerous conversations and lessons that were the first of the Holy Fathers` works to be translated into Slavonic.

In ancient times multitude of controversies about who of three Holy Hierarchs should be given preference took place in Constantinople. Strife even occured among Christians: one called themselves the Basilians, the others were the Gregorians, the third being the Johannites.

By the will of God in 1084 three Holy Hierarchs appeared before John Mauropous (lit. “Blackfoot”), the Metropolitan, announced that all three of them are   equal before God; and commanded stopping controversies, and establishing common commemoration day that is solemnized on February 12 (January 30)."