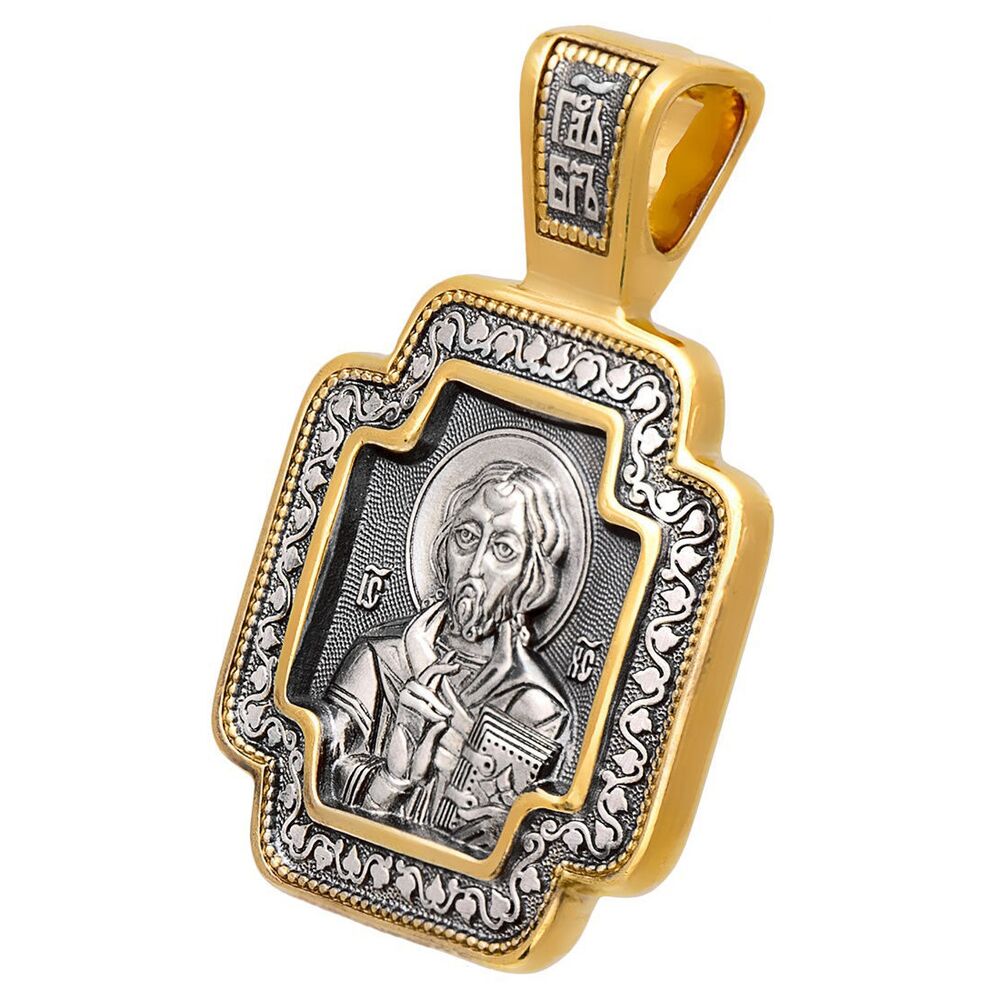 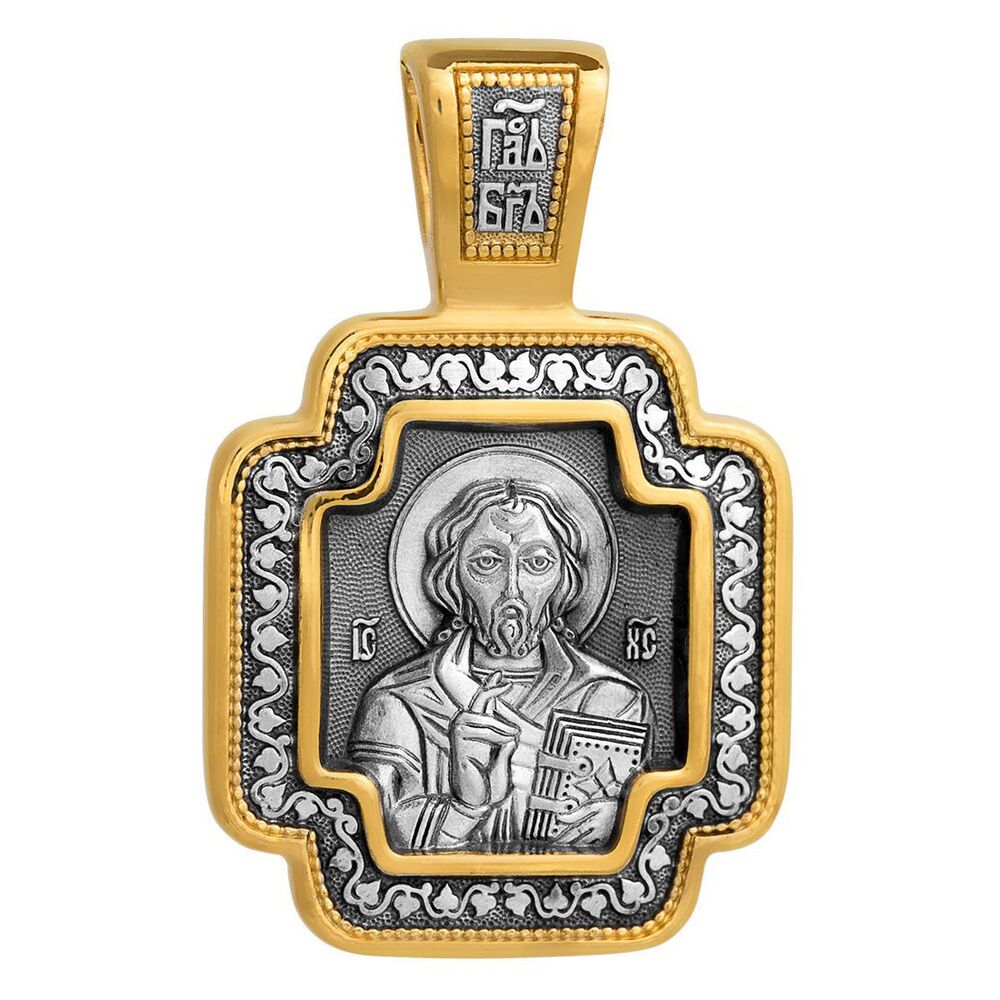 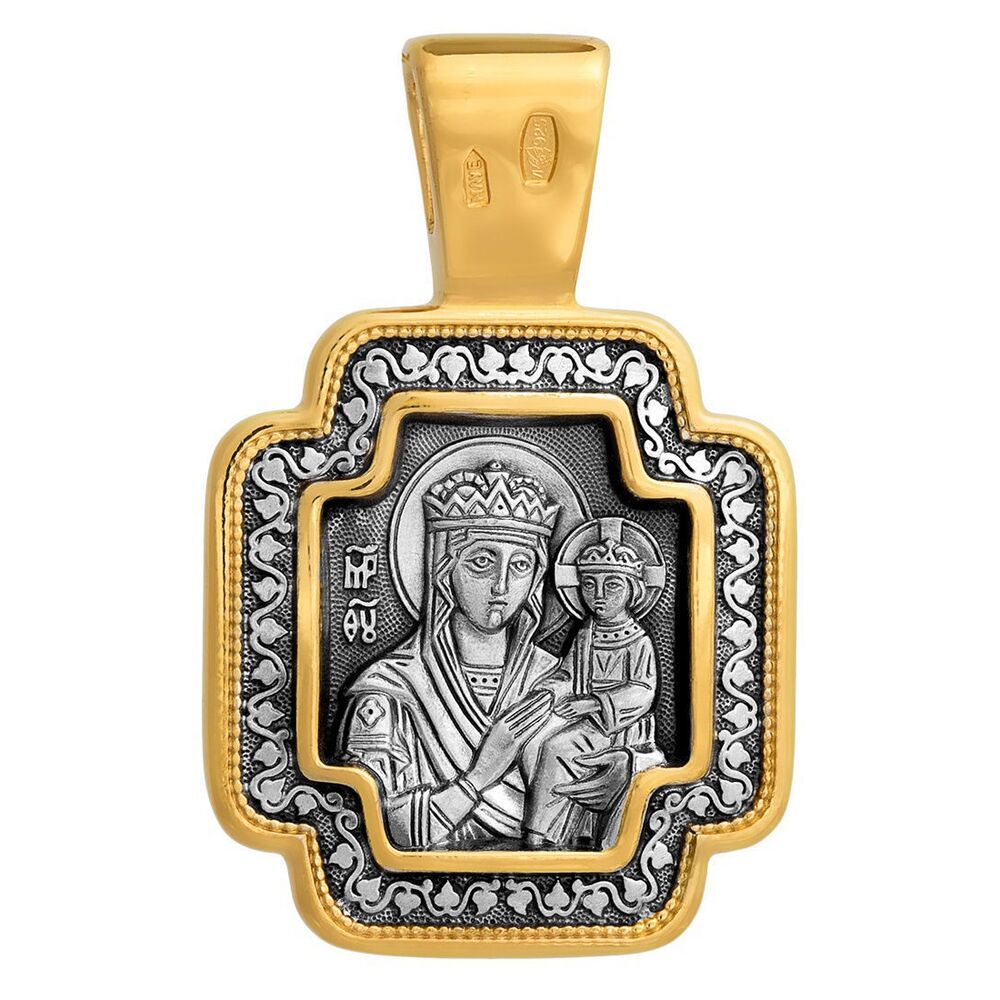 "On the obverse of a small equilateral cross Jesus Christ is depicted as The Lord Almighty. The reverse is decorated with the icon of the Most Holy Mother of God – “the Intercessoress of the Sinful”. Crosses of such regular “quadratic” shape were called Greek in Russia, and were particularly widespread in 11th – 12th centuries. At those times they were usually carved of stone or wood, and worn on a string.

The Lord image on the obverse is made according to the old iconographic tradition that had been already formed by 6th century. In His left hand Christ holds the book that symbolizes Genesis, i.e. the whole God-created world, with the right hand giving His blessing to the book. It often called the Book of Life, because all human deeds are written down to it as well as the names of people selected for eternal life. As Apostle John says, woe is them, whose name is absent in it: God's wages will befall them. But the Most Holy Mother of God is the Intercessor of all the sinners.  Her image just called “Surety of Sinners” is placed on the cross reverse.

The icon was named by the inscription surrounding the “prototype” of the Mother of God image: “I am the “Surety of Sinners”, the intercessor with My Son: He has given His hand to me in hearing my prayers for invokers”. It means that the Lord promises her (“gives His hand”) to be attentive to Her supplications and protection. The Mother of God “Surety” – that is the guarantor, incessantly advocating and praying for those who committed a sin. On the icon the Most Holy Mother is crowned and has the Infant God on Her left hand. Both hands of the Infant Christ touch Her right hand in token of Her prayer being heard.

The image was first famous for its wonder making in the Odrinsky Monastery of St. Nicholas in 1843. Paralyzed two-year-old son of merchant's wife was healed. In 1846 a copy of the icon was sent to Moscow to the lieutenant-colonel Dmitry Boncheskul.  In 1847 another merchant's wife Scherbakova, the priest’s sister went to see the lieutenant-colonel. She had a disease of spinal cord, and was healed after praying before that icon. In 1848 at Eastertide Mr. Boncheskul noticed the icon to shimmer, and drops of holy oil appeared on it.  Realizing that a wonder making sacred object is in his house, the lieutenant-colonel took it to the parish church dedicated to St. Nicholas in Khamovniki (wherein it had stayed to this day).  In the church the icon kept on holy ointment shedding, and started emitting extraordinary shine, the flashes thereof eyewitnesses compared to the shine of stars. Police took measures to ascertain the light source, assuming probable trickery, “but came to no conclusion: shine phenomena stopped by itself on June 10”.  Holy ointment shedding went on for a long time.  The deacon standing by the icon wiped the drops that stood out on it, and handed out those pieces of paper to people. Many were healed by that myrrh. Then a “Book of the Icon Wonder Making” had been commenced, and was being conducted during six years. By 1850 the icon “Surety of Sinners” had worked not less than 115 authenticated wonders of healing of illnesses, including cholera, paralysis and epileptic seizures.

Copies of the wonder making icon spread all over Russia, multitude of them were as well famous four wonders. Considered is that by a prayer to this image the Mother of God not only heals, but exempts from morbid passion, and can bring a sinner to repentance, even he does not think of a recovery not in the very least. The icon observance is kept on March 20(7) and June 11 (May 29)."