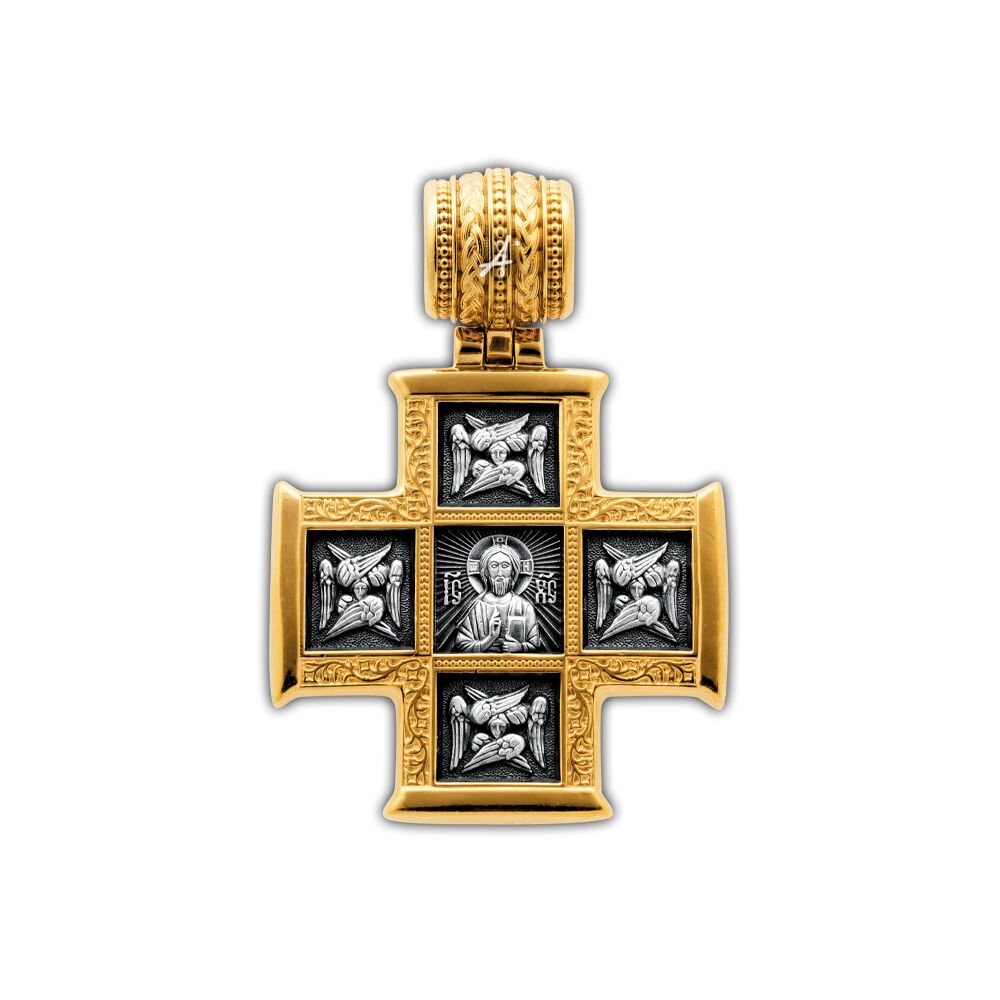 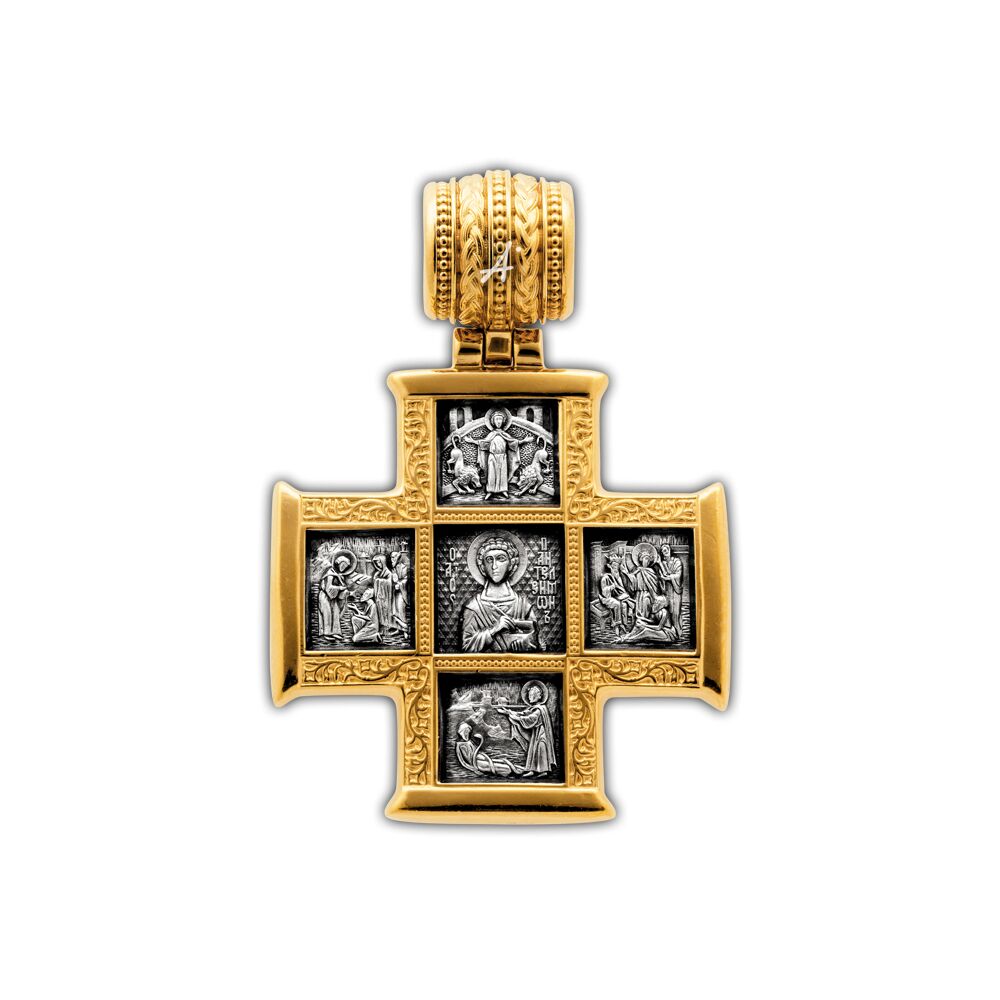 "In the center of the cross obverse Jesus Christ is shown as the Lord Pantocrator. He is surrounded by seraphs – superior angels, the closest ones to God. In the Pantocrator iconography Jesus Christ is revealed as omnipotent God holding world's fate in His right hand. Book in His hand is the Book of Life – the symbolic image of the Universe. The God-created world is finite, mankind saving for the everlasting life after the end of the age being the primary goal of divine direction. Devil also fights for human souls, tempting persons with various sins. Throughout life a person stands at the parting of the ways to God or to devil; to good or to evil. For a person to turn his/her back on Devil God sends adversity, diseases being one of the most common. Gospel many a time speaks of bodily diseases to be directly connected to and depend on mental disorders. When healing a sick person Jesus Christ firstly forgives his/her sin. At first He doctors a soul for sins and then – a body for diseases. It is soul that governs body (and not vice versa), and that is spoken by hagiographies of great healers and wonder makers, the Gr. M. Panteleimon († 305) being one of them. The cross reverse is devoted to this great saint. St. Panteleimon is painted the same way as on the Sinaic icon of 13th century. Martyrdom cross in the right hand and a box for medicaments in the left one are indicative of the saint’s belonging to the rank of both of great martyrs and saints.

The Great Martyr and Healer Panteleimon was born in Nicomedia (Turkish Izmir now) at the time of the Emperor Maximian governing (284-305) into the noble but heathen family, and named Pantaleon, which means “like a lion”. He got a new name Panteleimon (meaning «all-merciful”) just before his martyrly death. Panteleimon wanted to help people and therefore started learning medicine, but only in the teaching of Christ he found an opportunity to deliver people from sufferings. The first wonder he made in Christ’s name even without being baptized was vivification of a child struck by a snake. The miracle is shown at the foot of the cross reverse. Panteleimon stands before the lying child embraced by a giant snake and says a prayer. The child came back to life, the snake dying. After that miracle Panteleimon was baptized and started heal sick persons gratis in Christ’s name. Fineless love for people and God and steadfast faith were his main tools. He became famous. Many patients having left other physicians preferred being treated only by him, and many of them accepted to Christ. To the left of the central image we see the wonder of miraculous healing of a blind man. Out through envy the physicians of Nicomedia have delated to the Emperor Maximian that Panteleimon heals gratis in Christ’s name. Maximian persuaded the saint to prove the delation wrong and to offer sacrifice to idols, but St. Panteleimon professed himself a Christian and before Emperor's very eyes healed a paralytic in Christ’s name. That wonder is shown to the cross right. The cured glorified Christ and the frenzied Emperor put him to death, delivering St. Panteleimon to the cruelest tortures.

The youth was put on the rack; he was rent by iron hooks, burnt by candles, stretched upon the wheel, thrown into boiling stannary, immersed to sea with a millstone around neck. They tried to make him withdraw from Christ.

But the martyr remained steadfast and was wonderfully healed of the wounds. Then, as a magician he was condemned to be torn to pieces by wild lions in the circus. But the beasts lied down at the saint’s feet and started licking them, competing. Audiences get up crying: “Great is the God of Christians”! The wonder with lions is shown at the top.

Fierced Maximian ordered warriors to slash everyone who glorified Christ’s name and to decapitate the Gr. M. Panteleimon. The saint was fastened to an old olive tree, and a warrior hacked him at with sword. But the martyr did not finish saying his prayer, therefore the sword flexed like wax at his neck. The same moment the voice sounded from the sky, calling for the saint and naming him in a new way. The warriors fell to the martyr’s feet and refuse to execute him. But Panteleimon told them to do their duty. When he was decapitated milk flew from the wound, the old olive tree became heavy with fruits. Nowadays the Honourable Head of the Gr. M. Panteleimon is kept in a special shrine in the Holy Mt. Athos in the Russian monastery named after him."