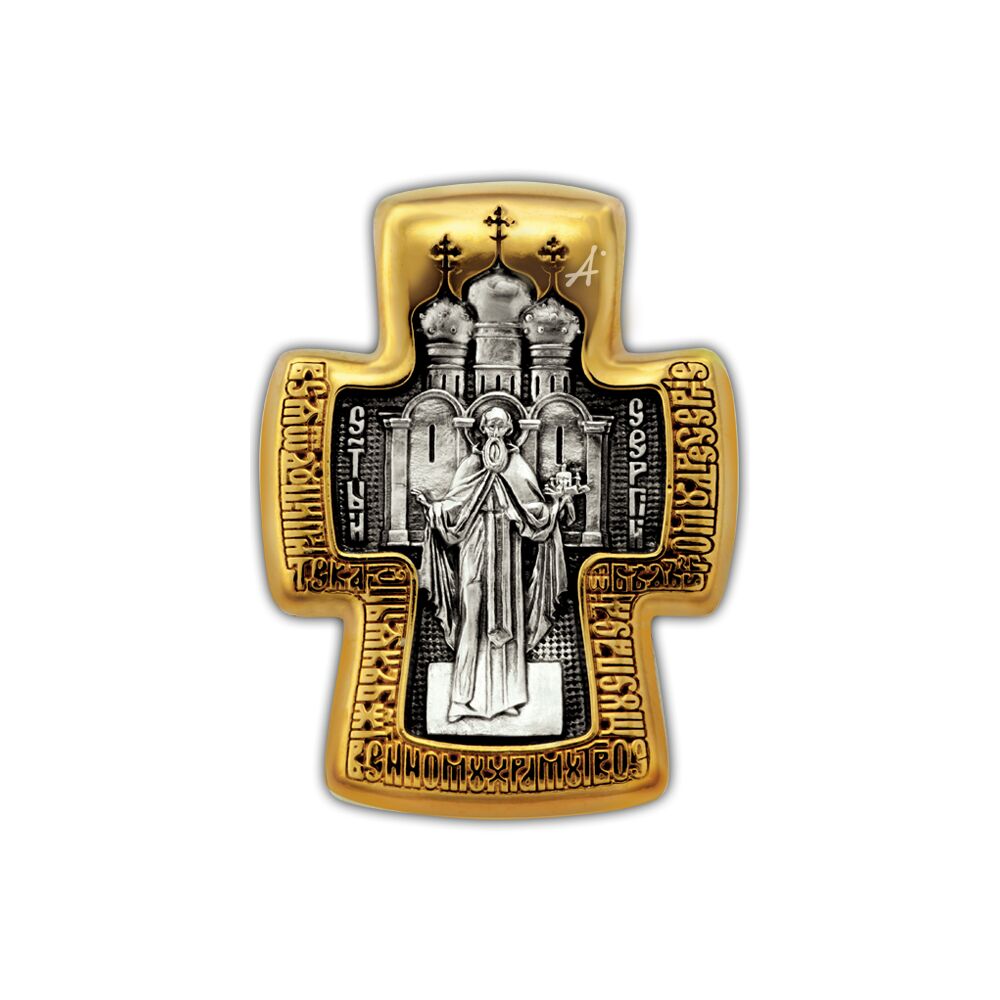 "This small close-to-skin cross is dedicated to the Trinity Lavra of St. Sergius, spiritual center of Russian Orthodoxy, and to its founder – Blessed Sergius of Radonezh. The Russia biggest monastery grew from a tiny wooden Trinity church cut by Blessed Sergius and his brother Stephan in the passless Radonezh forest in 1337. The old church burnt away and in 1422 Blessed Nikon of Radonezh, a disciple of St. Sergius, built a new – stone – one. It was for the iconostasis of the new Trinity Cathedral that Blessed Andrei Rublev painted the icon of Life-giving All-Holy Trinity – the greatest handiwork of Russian spirituality and the masterpiece of the world art.

«Holy Trinity. Blessed Sergius of Radonezh»The cross obverse shows us the lines of the Trinity temple of the Trinity Lavra of St. Sergius, three angels sitting inside around the refectory table. The prayer “Trisagion” is scripted at the foot: ""Holy God, Holy and Mighty, Holy and Immortal, have mercy on us""! Along the gold side the cross there go the words of devotional oration to each face of Triune God: “O Lord, cleanse away our sins; O Master, forgive us our iniquities; O Holy One, visit us and heal our infirmities”. That is a part of the prayer to All-Holy Trinity, one of the basic prayers starting any divine service.

During the Trinity Cathedral construction the relics of St. Sergius were invented that became the cardinal sanctuary of the new temple. The wooden coffin having held his holy body from 1392 till 1422 was removed to the new five-domed Assumption Cathedral of the Lavra in the end of 16th century. On the cross reverse Blessed Sergius is depicted against the temple background.

Blessed Sergius was a great wonder maker and a Teacher of the Church, a spiritual guide of medieval Russia. His legend speaks of his being God chosen before arrival: during a liturgy he shrilled out thrice in his mother’s womb. Due to devoutness of parents, his own belief and spiritual purity; whole-hearted love to God and prayer zeal unearthly spiritual world opened to Blessed Sergius as early as in his childhood. In adulthood he became “the monks’ guide and angels’ talker”. Cenobites of the monastery that he founded witnessed many miraculous appearances to the blessed man. Once during a liturgy they saw an angel of the Lord concelebrating to St. Sergius; another time his lay-brother Blessed Micah was present at appearance of the Most Holy Mother of God accompanied by the Apostles Peter and John the Theologian. By power of his prayer St. Sergius opened sources of water, augmented bread and butter, healed maladies and even raised the dead. Great Teacher of the Church Blessed Sergius of Radonezh instructed people looking to All-Holy Trinity should practice overcoming “discord and hatred of this world”, increasing mutual love and seeking after proper unity. Through crowd of his disciples who dispersed Russia-wide he demonstrated a pattern of such holy love. Blessed Sergius went to heaven on September 25, 1392. Before decease he commanded brethren to keep purity of the Orthodox belief. Along the gold side the cross reverse a prayer surrounds his image: “Save of calamities everyone wholeheartedly coming to the divine temple of yours, God-wised Sergius”."