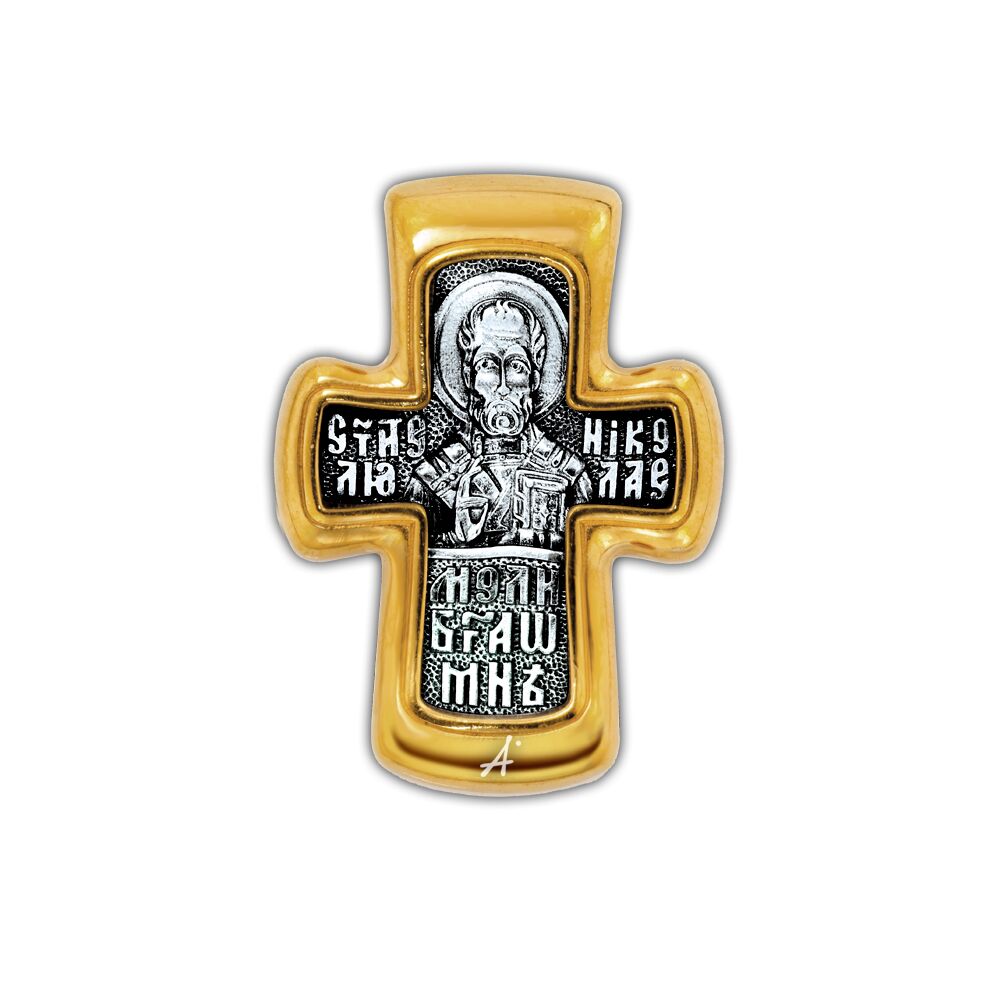 "The cross obverse is canonically devoted to our Lord Jesus Christ. The Savior is shown crucified on the cross, however we see Him not dying but triumphant. Jesus Christ turned the cross — the instrument of His capital punishment — into the instrument of victory over sin and death. Through His suffering He made satisfaction for mankind sins; through His death and descent in hell He overcame Satan, liberated souls of the righteous from eternal death, and opened heaven-gate for them. Christ’s sacrifice made it possible for everyone to be saved. Therefore on the Orthodox crosses Christ is shown not suffering but as if enheavening and embracing the entire world. He is the Savior trampling down death by death and calling to Him “all ends of the earth” (Is.45, 22). Therefore alongside the cross there is written “НИКА”, which means “I have overcome”. The Lord said these words upon resurrection have confidence, addressing to His disciples: “…but have confidence, I have overcome the world” (Jn. 16, 33). On both sides of Christ shown are the instruments His sufferings: stick and sponge; and lance. Behind we see wall of Jerusalem. On icons it symbolizes both execution yard and New Jerusalem the way in which was opened through Golgotha.

On the cross obverse we see the most revered Russian saint — Nicholas the Wonder Maker (second half of 3d century). He has been bishop of Myra in the Lycia city of the Roman province in Asia Minor and became famous through great miracles and works of charity that that he keeps making and doing beyond the grave. St. Nicholas is prayed for the intercession by all the resentful, persecuted and innocently convicted, by those in needs or in distresses. He helps everyone who calls upon him with faith and prayer: to students, travelers, sailors and traders; he heals the sick, pacificates those quarrelling, finds those misplaced, and even raises the dead.

Here are the most well known facts of his life. Once the holy archbishop heard about a father who being on his bones decided on trading in his daughters. Three times he went up to the poor man house at nights and slipped small bags with gold; thus every daughter got her dowry and married happily. In West Europe that history became a legend about St. Nicholaus (Santa Claus) who at Christmas Eve threw into stove pipes (variant: put into stocking or sock) presents for kind and docile children.

Many times St. Nicholas pacified storm while voyaging; healed mutilated sailors and passengers and even raised them from the dead. That is why already in his lifetime a great number of travelers prayed to him in calamity time.

When famine blew up in Lycia St. Nicholas made another wonder. There was a grain merchant who was next day going to sail forth away with bulk. St. Nicholas appeared in merchant dream and ordered to sail to Lycia. In advance Holy Hierarch left three gold coins that the merchant found gripped in his hand in the morning. The merchant brought grain to Lycia, sold it to advantage and saved starving people. St. Nicholas is since venerated both as the intercessor of those who is needy, and as the helper in commerce.

The Holy God-Pleaser is as well honored as a peaceMaker for antagonists, protector of innocently convicted, and savior from vain death. Once in his absence three citizens were innocently condemned to death by Myra governor. Holy Hierarch returned to Myra just before the execution and was in time for stopping the executioner hand. Another time Byzantian emperor condemned three generals to death by a slander. The convicts started praying to God passionately invoking St. Nicholas.  That very night the Holy God-Pleaser appeared before the emperor and the mayor of the town in their dreams, threatened to deprive them of their power, and demanded to release prisoners. “But who are you to dare demand and threaten, what is more? – The emperor asked. “I am Nicholas, Archbishop of Myra in Lycia!”. The ruler ordered to retry the generals` case and, ascertained that they are innocent, released them.

The Holy God-Pleaser Nicholas lived up to extreme old age and fell peacefully asleep in the Lord on December 19, 342. His incorruptible relics in 1087 were transported to Bari (Italy) staying there hitherto. He is commemorated on December 19 (6) and May 22 (9) (in the day of relics’ transportation). Beside his image on the cross short pray is written: O, St. Nicholas, pray unto God for me!"