Neck Cross Akimov 101.050 «Cricifix. The Entry of the Mother of God into the Temple» 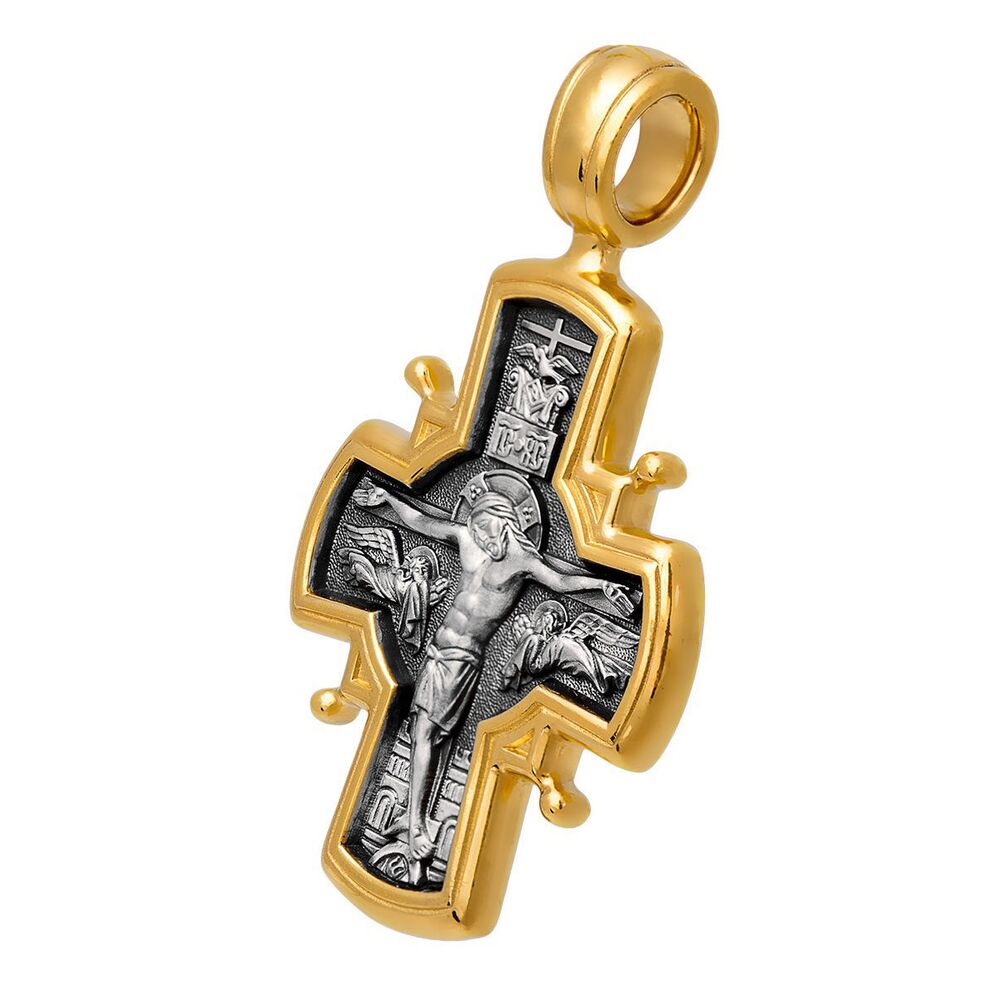 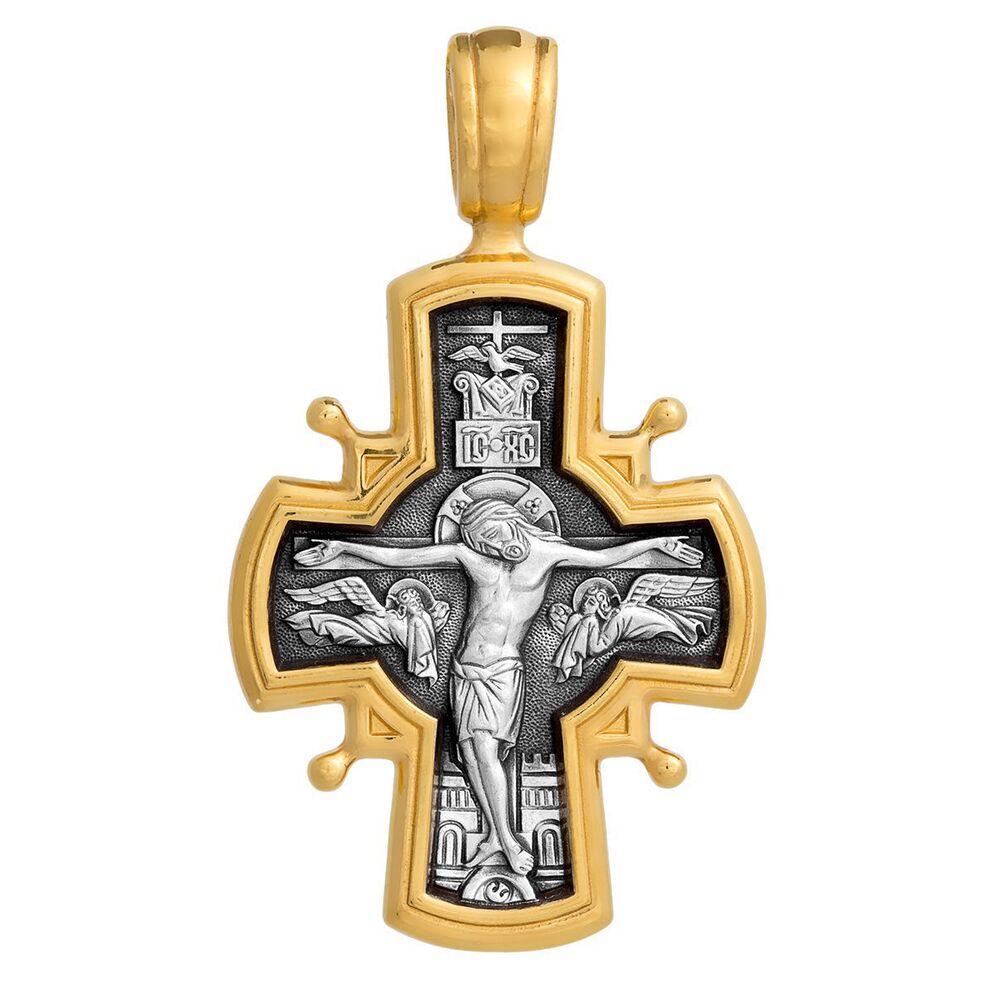 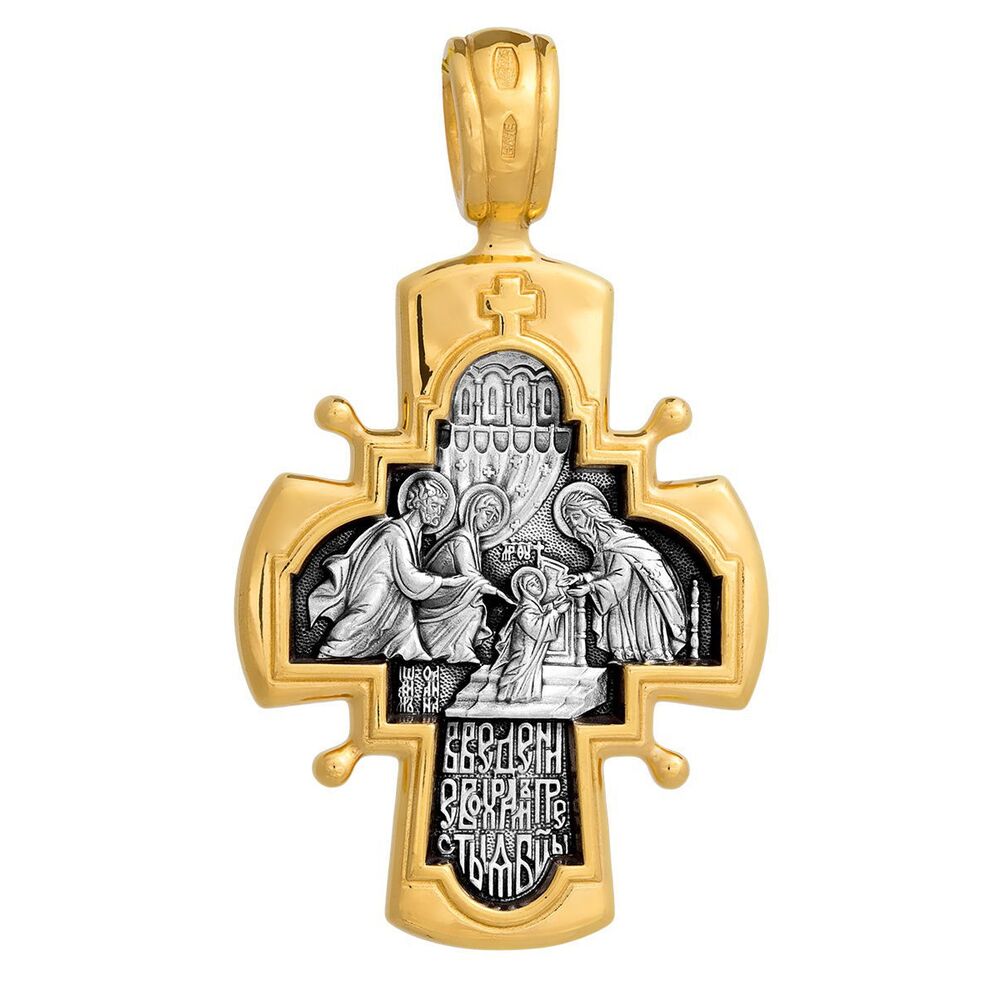 "According to the canons of Church on the obverse of the cross there is portrayed Our Lord Jesus  Christ. The reverse is devoted to the Most Holy Mother of God, to feast of Her Entry into the Temple.

The Crucifix has been always put on cross obverses most often. In Orthodox tradition this image depicts not so much Chris suffering as His greatness and victory over death. Jesus Christ is as if not hanging on the cross but rising over the earth, with His arms spread embracing the entire mankind, and looking at it with paternal love.

The Lord was crucified near Jerusalem on the Golgotha (skull, forehead, in Aramaic). By the Legend His Cross was erected at the very burial place of Adam – the earliest sinner in the world. Therefore Adam’s skull and his crossed arm bones are pictured at the cross foot as an evident image of a propitiatory sacrifice of Christ.

Golgotha was outside the city; therefore we see the Jerusalem wall behind Christ. The wall symbolizes as well the wall of the Heavenly Jerusalem that was inaccessible to people at the Old Testament times as a result of the original sin. Jesus Christ took the human sins on Him and expiated them by His blood on the Cross, thus becoming the door to the Kingdom of Heaven. Guiltless sufferings of the Lord are bemoaned by angels flying to the Cross.

Above the cross we see the prepared Throne – Etimasia, in Greek. The Lord prepared this Throne for Himself by His sufferings. He will mount it at the end of times for Judging the living and the dead.

On the cross reverse there is the icon of the Entry of the Mother of God into the Temple – one of the most worshipped Twelve Great Feasts in Orthodoxy. The event is narrated in the Scripture and Legend as follows.

Virgin Mary’s parents, the righteous Joachim and Anne, prayed for a child, since they were already not young but remained childless, and grieved for that heavily as they believed that childless couples were not blessed by God. They took the sacrament to devote the child to God if it came. So, when the Holy Virgin was 3 they kept their promise. The Holy parents dressed Her in royal garments, adorned Her, gathered relatives and acquaintances, and provided Her with an escort of maidens carrying lighted candles and singing sacred hymns. Upon arriving at the temple, She was met by the First priest with multitude of priests. A ladder led to the temple, and the 3-year-old Infant Mary had to make an effort to ascend 15 high steps in order to enter It. It seemed difficult for the baby to climb the ladder, but the Holy Virgin went up the steps by Herself, without any help from others, but with the miraculous help of God. Then the First Priest met Virgin Mary at the entrance and, on the guidance of the Holy Spirit, led Her into the holiest of the holy, where he himself could enter only once a year.

The Most Blessed Virgin Mary remained to live at the temple in the housing for virgins. According to the Scripture (Exod. 38; 1; Kings 1, 28; Luke 2, 37) and to Joseph Flavius, there were numerous living quarters around the temple, where those devoted to serving God lived.

The earthly life of the Most Holy Mother of God from the infancy to Her rapture to heaven is lost in mystery. Her life in the Jerusalem Temple was concealed as well. “If anybody asked me, – Blessed Jerome said, – how the Holy Virgin spent Her time in youth, I would have asked: only God Himself knows that, and Archangel Gabriel, Her persistent guard”. Only stories remained in Church Legends that abiding in the Jerusalem Temple She spent most of the time in praying and reading holy books, rose in Her devotion to God, and went in for fancywork.

Holy Church has since olden times established a solemnity in commemoration of the Entry of the Mother of God into the Jerusalem Temple. Evidence of the feast celebrating has been already found in legends of the Palestinian Christians in the first centuries of Christianity. It is also told there that the first church of the Presentation of the Mother of God has been built by the order of the Holy Zarina Helena (about †327). In 6th century the feast was mentioned by St. Gregory of Nyssa.

The Feast of the Entry of the Mother of God into the Temple is a sermon of saving and the promise of Christ advent. In the church each soul can find the same beatitude, as the Holy Virgin did in Jerusalem Temple. The Mother of God loving Church helps everyone coming to it for praying, with joy.

The Feast of the Entry of the Mother of God into the Temple is celebrated on December 4 (November 21)."