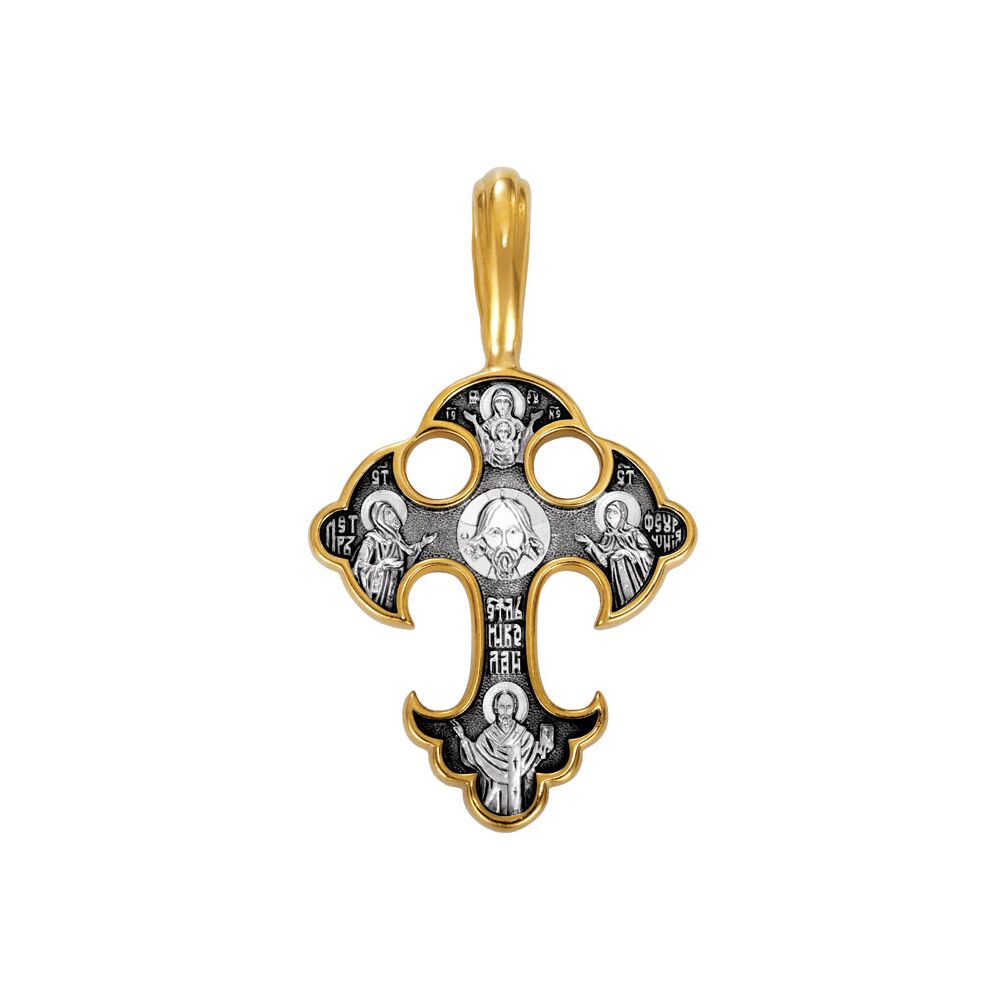 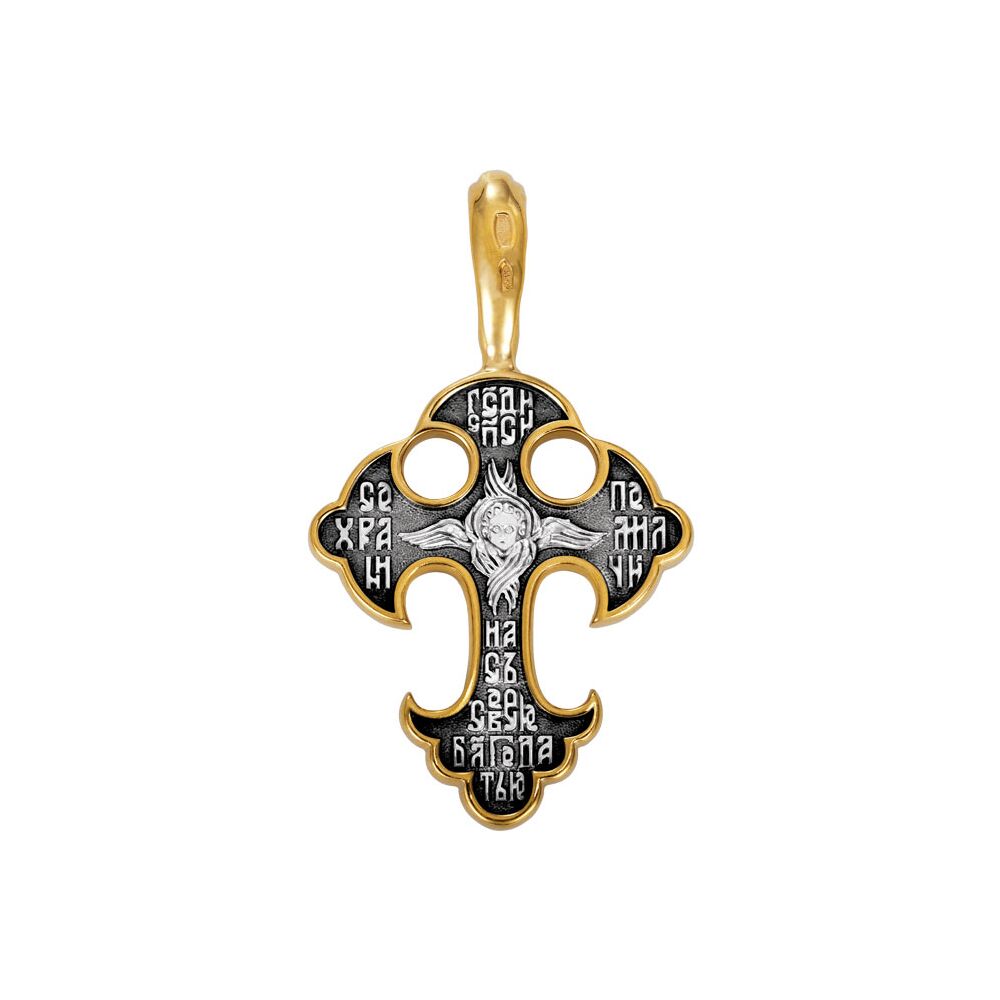 "The Cross in Blossom shape that this small cross worn on one’s neck has, originates in traditions of Russian crosses of 14th century. Its beam ends “blossom” in three-leaved lily buds symbolizing purity sanctity and love. Since ancient time the lily had been also considered as a symbol of peace and God's blessing. According to legend it was lily that Archangel Gabriel gave to the Most-Holy Virgin Mary when announcing that She will gave birth to the Divine Son.

The birth of Messias had been foretold by prophets long before the Annunciation. The words of Isaiah became the climax of predictive promises: “Behold, a virgin shall conceive, and bear a son, and shall call his name Immanuel” (Isa. 7:14). An iconic embodiment of that prophecy is the icon of the Most-Holy Mother of God of the Sign. Its place is at the top of the cross, just like in Russian high iconostasis. Below there is the image of the Savior Himself.  That is the most hallowed image of Him – the Vernicle Image of the Savior. According to legend, the image was miraculously imprinted upon a linen towel that the Lord wiped His face on after washing. The Vernicle Image is in the cross center. Holy spouses Peter and Febronia of Murom intercede with it on either side. According to the teaching of the Church, the Lord Jesus Christ is the head of a Christian family as of a small Church. Therefore on the cross Christ’s image does not divide but unite the images of right-believing couple images.

Family concordance is impossible without God – the center of human spiritual life. God fills and sanctifies it with His presence, strengthens in misfortunes and hardships, and blesses in joy. We are taught it by example of Sts. Peter and Febronia, right-believing married couple who reigned in Murom in the beginning of 13th century. The spouses spent a long and happy life in devotion to God, in love to people and to each other, sharing sorrows and joy. There were no ascetic labors or sufferings for belief in their life. But Church glorified them as the saints because it is very difficult to keep one’s devotion and fidelity to God and to each other in purity, to carry those feelings without besmirching for the rest of one’s life through various ordeals – persecution, penury, maladies, and wealth and power temptations – and to give an ideal example of Christian matrimony.

In old age the prince took the monastic vows under the name of David, his wife taking the veil as Euphrosyne. Having lived apart for some time they died in one day and hour.  The holy couple prepared a common coffin beforehand and were buried therein on July 8 (June 25), 1228. A festival was established on their death day – the Day of family, love and fidelity.

At the foot of the cross we see the image of the Church most hallowed saint of the Christendom – St. Nicholas the Wonderworker, Archbishop of Lycia in Asia Minor in 3d century. During his ministry the Holy Hierarch became famous for numerous wonders and works of mercy. He is still appealed to for help in commerce and in learning, for quarrelling settlement, and for convincing powers that be. The saint is also hallowed as the healer; the defender of the offended, the persecuted, and indigent, as well as the patron of honest marriage, and of travellers.

Among all good causes by St. Nicholas the story about three sisters is most widely known. The girls’ father being in dire need and having no money for their dowries brought himself to sell them into concubines – an extreme step. Getting to know that, St. Nicholas three times went up to the house of the poor man in secret and threw small sacks of gold under it. Owing to that each daughter got her dowry, escaped ignominy and married happily. In West Europe the story has grew into the legend about Santa Claus who throws presents for kind and docile children into chimney on Christmas Eve. St. Nicholas is commemorated on the day of his eternal rest, December 6 (19), and on the day of relics removal, May 9 (22).

A prayer to Christ is written on the cross reverse around extended wings of Seraph: “O Lord, save and preserve me, and have mercy upon me through thy grace”."