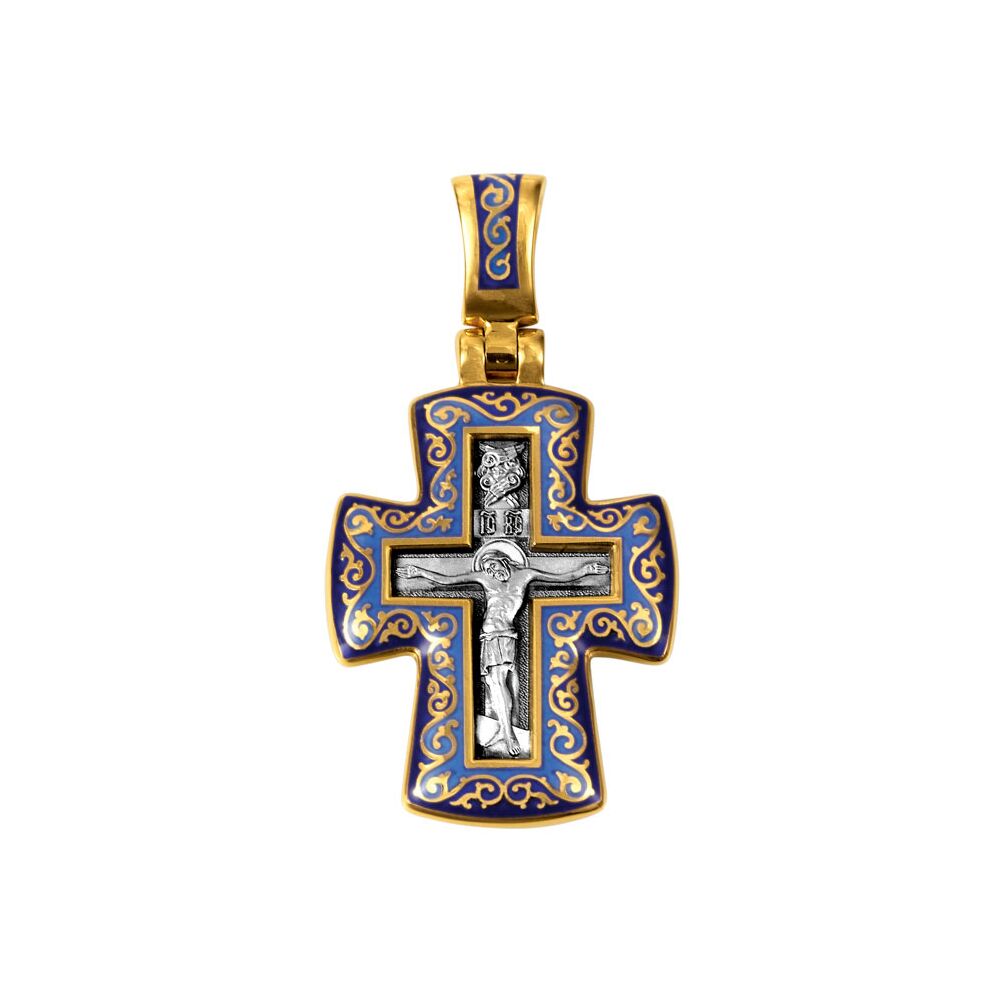 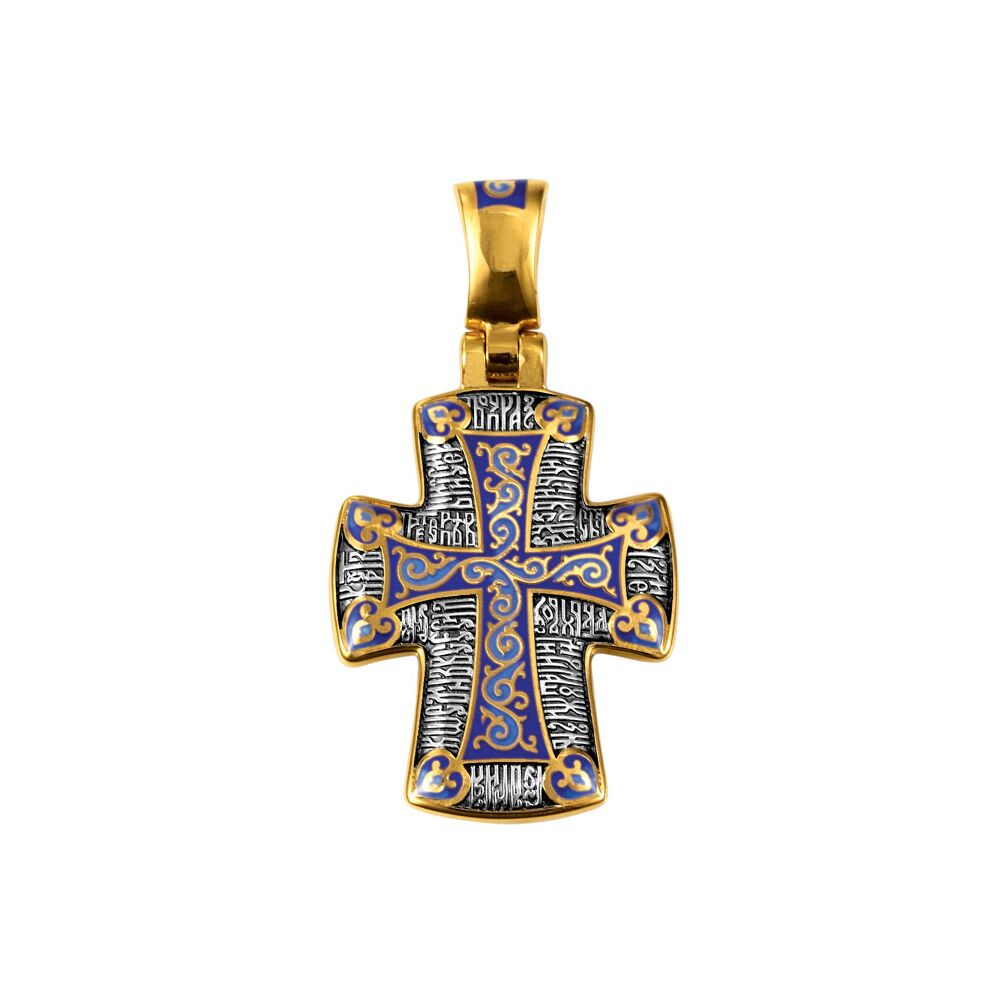 "According to the tradition the obverse of a next-to-skin cross most often shows the Crucifixion. This is because any next-to-skin cross symbolizes first of all the Passion of Christ, His death, and Resurrection. Two opposites — death and raising from the dead; sufferings and Paschal joy – are combined in the same image. Therefore we see the Son of God not simply nailed to the cross but as if spreading His arms and inviting the entire world to his embrace. Such an appearance of the Crucifixion preserves the image of Christ’s sufferings, and yet renders exactly its spiritual sense and theological profundity.

According to the Orthodox tradition the Lord’s body does not hang loosely on the Cross, but solemnly reposes upon it. Crucified and deceased Christ is pictured alive in His death. With His arms splayed out Christ embraces the entire Universe, including not only people but angels as well. The angelic world is symbolized by a six-winged seraph that is cuddling up to the upper crossbar whereon His Holy initials are written – ИС ХС.

The austere inner shape of the cross outlining the raised Crucifix is emphasized with outer wider space enamel decorated with spun gold ornament. That plain four-ended shape is rich of numerous spiritual senses. The vertical crossbar rushing upwards symbolizes correctness and indisputability of God's laws, straightforwardness of Divine righteousness and truth excluding any violations. This straightforwardness is crossed by transverse bar that symbolizes God's love and mercy for sinful mankind. For the sake of that love the Lord was sacrificed and undertook sins of humanity.

In one’s spiritual life the cross spirit of verticality means sincere aspiration of human soul for God from the earth. This aspiration is crossed by love for people; by charity that prevents one from fulfilling one’s high aspiration, but without which human life is impossible quite like impossible is the cross without transverse arm.

The Holy Fathers interpreted the spiritual senses of the Cross of the Lord finely and multiply. ""God has created this visible world in the likeness of cross, - the Holy Hierarch Dimitry of Rostov (17th century) writes – “since He has departed it into four ends: East, West, midday (South) and midnight (North); and a human being has been God created in the likeness of cross as well, since a man his arms splayed out resembles a four-ended cross "". And according to St. Basil the Great (6th century) “all parts of the world has been saved through the cross parts”. The Metropolitan Platon who lived in 18th century compared the Cross to the key to the Kingdom of Heaven: “There is no other key that might open the gates of the Kingdom of God but the Cross of Christ”.

St. John Chrysostom (4th century) preached about the Cross: “the Devil overcame, and Christ beat the Devil with his own weapon; and listen how it went. A virgin, a tree and death has been the signs of our being defeated: Eve has been the girl; tree has been the tree of paradise; punishment of Adam has been death. And again we have a girl, a tree and death, but this time the same signs mean our victory. There is Mary instead of Eve; there is the tree of Cross instead of the Tree of Knowledge; Christ’s death instead of that of Adam. We have become ever-living trough death <…> Now when we decease (by temporal death – dormition) we do not move away from God but approach Him”. Therefore Christ’s sufferings present in every cross along with Paschal joy. We rejoice because the Lord destroyed hell with His Cross, and trampled death by His death. That triumph of life over death is revealed in the pray written on the cross reverse: “O Lord, You, Who suffered on the Cross; and abrogated death; and was raised from the dead; appease our life as being the only omnipotent!”"