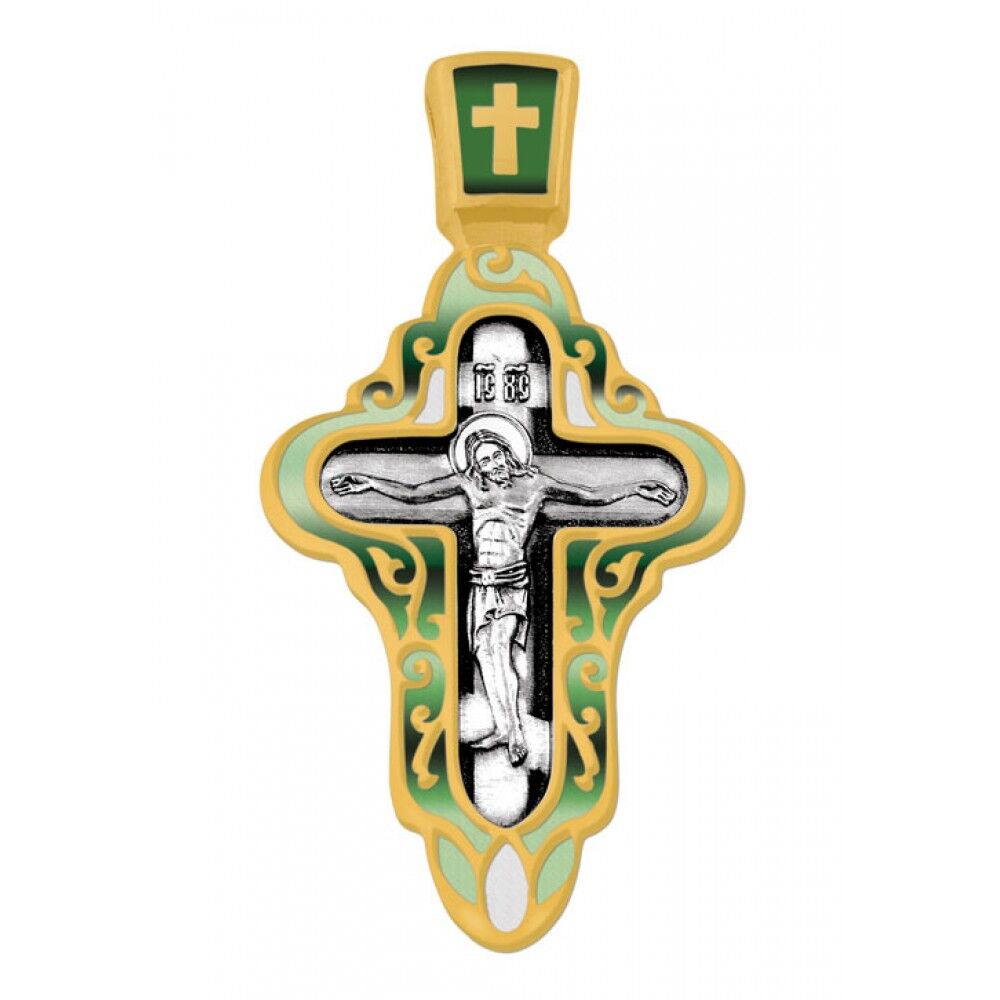 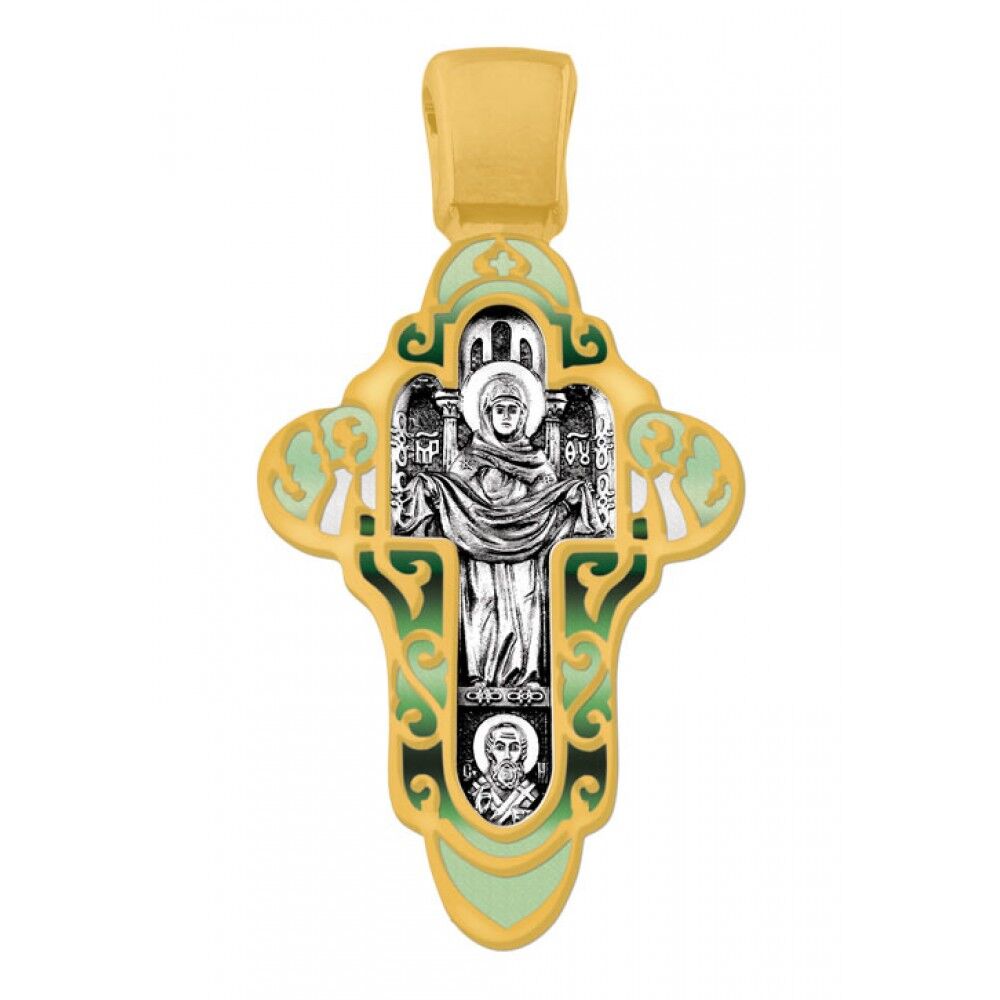 "A small cross with the image of the Crucifixion on its obverse; and with the icon of Protecting Veil of the Mother of God on its reverse is made in the oldest traditions of the Orthodox Church. Silver embossed work is bordered on either side by golden frame with enameled tracery. Plastic art combining with enamel ornaments is traditional for the Orthodox art but is seldom used in modern pieces due to processing complexity. This art has attained astounding growth in medieval Byzantium and Georgia. Tabernacles, reliquaries, shrine crosses, icons metal mounting has been decorated there. Colorful enamels and raised miniatures of delicate and laborious work created images lofty and stately images, but cheerful and festive too. In every piece of such kind there presents joy at the appearance of God and communion with Him that has first rung in the Angelic Salutation for the Virgin Mary: “Hail! Mary, Mother of God, Virgin full of grace!”, присутствует в каждом таком произведении.

The image of the Crucifixion on the obverse traditionally tells not only about sufferings and death but also about the Resurrection and victory over death. The Lord is not hanging on the cross loosely but as if standing before it with His arms spread wide, and inviting all His children. This image of patronage and protection is compositionally evolving in the images of the reverse where we see the miracle of The Appearance of Protecting Veil of the Mother of God, and the icon of St. Nicholas the Wonderworker.

Gospel tells that when suffering on the cross the Lord addressed to His Mother with words: “Woman, behold thy son!” (John 19, 26), and turned His eyes to the Apostle John who stood beside. The Holy Fathers has since ancient times interpreted those words as adoption of the sons of men by the Mother of God, which gave Her a peculiar spiritual patronage and the God-given right of mediation and intercession with God for all the people.

Since then the world has been filled with numerous apparition of the patronage by the Mother of God – signs of Her maternal love. The feast of the Protecting Veil (Intercession) of the Mother of God is one of the most well known and memorable examples.

The Russian word Pokrov, like the Greek Skepê has a complex meaning. First of all, it refers to a cloak or shroud, but it also means protection or intercession. For this reason, the name of the feast is variously translated as the Veil of Our Lady, the Protecting Veil of the Mother of God, the Protection of the Theotokos, or the Intercession of the Mother of God. It is often translated as Feast of the Intercession. A miraculous apparition of the Mother of God occurred in the middle of 10th century at the Blachernae Church in Constantinople where several of her relics (her robe, veil, and part of her belt) were kept. On Sunday, October 1 at four in the morning, St. Andrew the Blessed Fool of Christ (a Slav by birth), who prayed in the church together with his disciple St. Epiphanius, saw the dome of the church open and the Virgin Mary enter, moving in the air above him, glowing and surrounded by angels and saints. She knelt and prayed with tears for all faithful Christians in the world. The Virgin Mary asked Her Son to accept the prayers of all the people entreating Him and looking for Her protection. Once Her prayer was completed, She walked to the altar and continued to pray. Afterwards, She spread Her veil over all the people in the church as a protection against visible and invisible enemies. Our Lady shined with Divine glory, and Her veil glared brighter than sunbeams.

In the Blachernae Church there retained the memory of the miraculous apparition of the Mother of God. In the 14th century, a Russian pilgrim and scribe by the name of Alexander saw in the church an icon of the Mother of God praying for the world, that reproduced the events as St Andrew saw them that day. According to the Primary Chronicle of St. Nestor the Chronicler, the inhabitants of Constantinople called upon the intercession of the Mother of God to protect them from an attack by a large Russian fleet (Russia was still heathen at the time). According to Nestor, the feast celebrates the destruction of this fleet sometime in the ninth century. But now the Greek Church does not know such a feast.  And in Russia the feast of Protecting Veil of the Mother of God was instituted about 1164 by the efforts of St. Andrew, the Prince of Bogolyubovo. Next year the world-known Church of Intercession of the Holy Virgin on the river Nerl was built. The famous St. Basil’s Cathedral in the Red Square in Moscow is as well named for the feast day, and is officially entitled ""the Church of Intercession of Our Lady that Is on the Moat”.

Below the icon of Intercession there is the image of St. Nicholas the Wonderworker, the kindest and the most worshipped Christian saint, European Christmas Santa Claus. And though St. Nicholas the Holy God-pleaser has lived long ago and far from Russia – in 6th century in Asia Minor – he has been for many centuries remaining the closest and the most beloved saint, a quick helper in all kinds of trouble and need. He is invoked by students and tradespeople, wealthy business owners and beggarly cripples, childless women and attentive mothers; and all of them are granted help from his hand that never grows scanty."