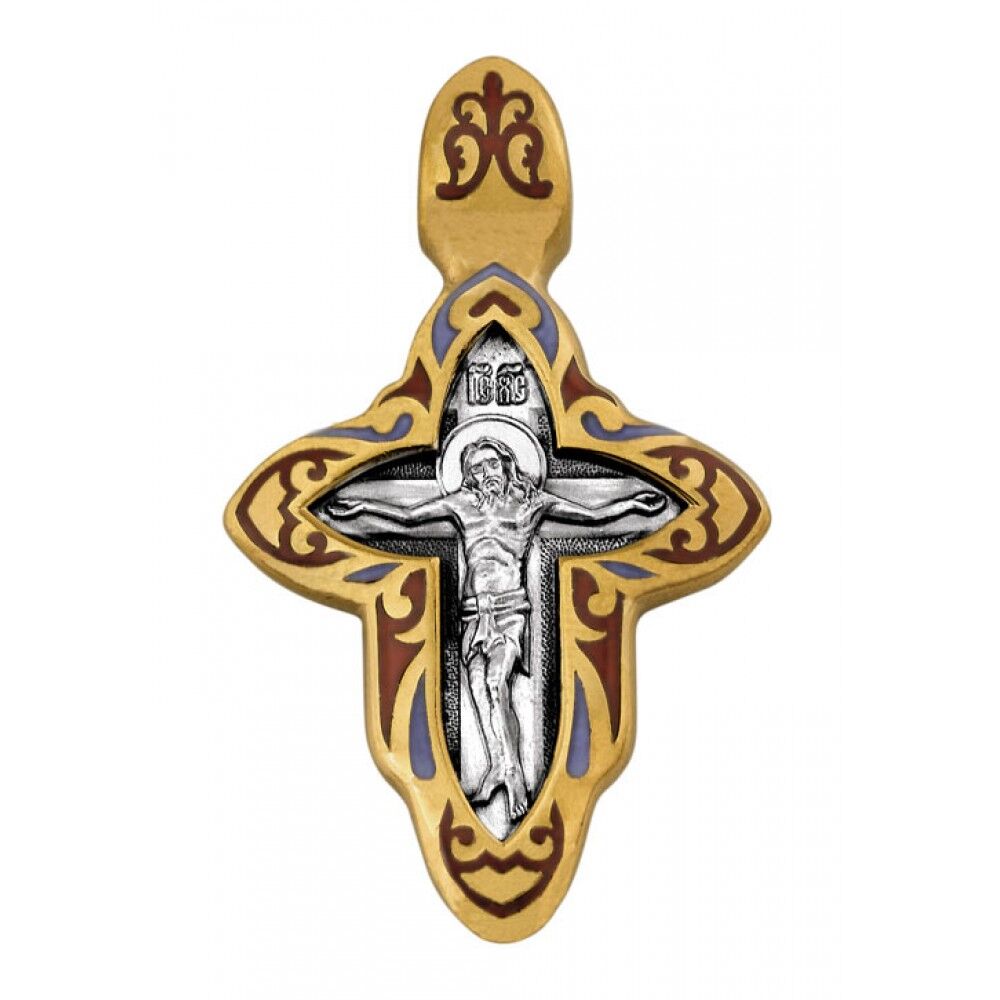 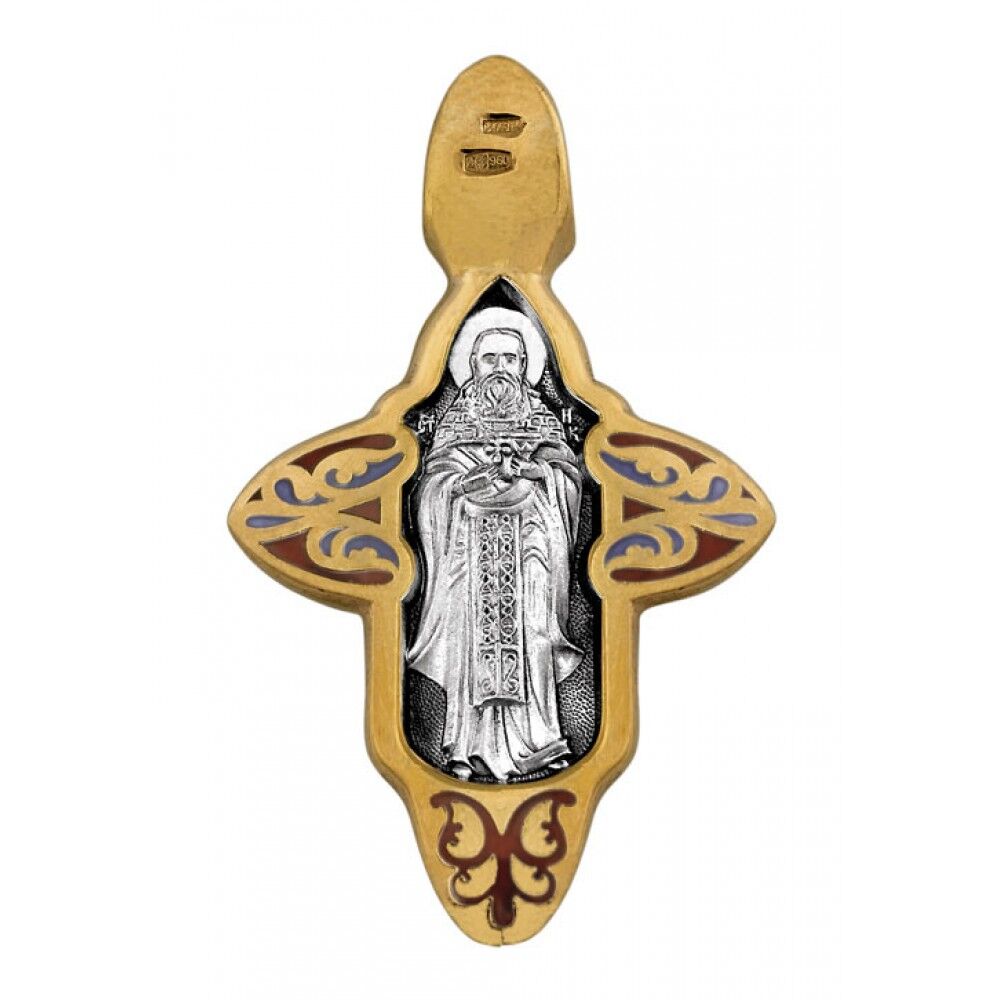 "A small cross with rounded crossbeams enamel ornamented along the edges is devoted to the greatest Russian saint – St. John of Kronstadt (October 19/ September 31, 1829 — January 2, 1909/December 20, 1908). The icon of him is on the cross reverse. The shape and the enamel ornament of the cross indicate his life and service interval: the second half of 19th century.

The cross obverse according to the Orthodox canon is sanctified by the image of the Christ Crucifixion.  It represents suffering of our Lord that He endured on the cross for sins of mankind. Jesus Christ, veritable God, omnipotent Creator of the entire Universe, the great King of Angels and human beings, the powerful Lord of every living thing, the ferocious Judge of the quick and the dead was born as a common human being for the love of His creatures, and died the most fearful and agonizing death the human cruel hearts were capable of.

The Divine Liturgy reminds us of the Savior’s great deed of love. The Liturgy is the most important Divine Service wherein performed is the Mystery of the Eucharist established by Jesus Christ in the Last Supper. St. John of Kronstadt believed that even the sun is shining and the ground is bearing for the sake of that Mystery: “But except the Liturgy celebrated, the sun will grow dark, and the ground will stop bearing”. Therefore St. John of Kronstadt is often portrayed with the Liturgical chalice in his hands.

When a child the saint has been notable for peculiar responsiveness to manifestations of spiritual world: aged six John was vouchsafed to see his Guardian Angel. Literacy troubled him considerably, like St. Sergius of Radonezh; and quite like St. Sergius he acquired the ability for learning by pleading prayers.

In 1855 St. John graduated magna cum laude from the Saint-Petersburg ecclesiastical academy, and soon was ordained the priest of the St. Andrew's Cathedral in Kronstadt. Since then and till the end of his life Father John had daily serviced the Liturgy. Believers from all over Russia came there for his services. Thousands of people gathered in the cathedral square to confess their sins, and to listen to the ardent sermon of the saint. St. John of Kronstadt was called “the all-Russian father (batiushka) for it.  At the same time the saint administered charity, taught in a gymnasium, established House of Love of Labor, founded several monastic communities, and traveled a lot about the country visiting the most remote corners of it.

St. John was the greatest ascetic but concealed his asceticism carefully from people. Incessant praying and fasting underlay his asceticism. Daily servicing of the Divine Liturgy demanded rigorous fast as well.  His Christian experience is recounted in a remarkable diary book ""My Life in Christ"".

Kronstadt was a place whereto the minor criminals and vicious persons were exiled. Besides, there were multiple of unskilled laborers who worked mainly in the seaport. All of them lived in wretched hovels and dugouts; panhandled and drank heavily. It was those persons seeming morally lost, and disdained by everyone, that the great spiritual overseer paid his attention to. Everyday he visited them in their mean abodes, conversed with and consoled them, nursed the sick ones, and supported with money, handing round everything he had, and quite often returned home undressed and even barefoot. ""A human being should be loved in his any state, both in his sin, and in his shame, – Father John said. – A man who is God’s image should not be confused with evil that is in him…"" Father John returned the lost human make-up to many of Kronstadt ""tramps"", ""riff-raffs"" through the power of his compassionate pastoral love; and it was they who first “discovered” his sanctity.

Astonishing gift of wonder working made Father John famous all over Russia and far beyond its borders. It is impossible to enumerate all wonders worked by the saint. Numerous wonders have been and keep being worked by his prayers. By laying on the hands and by praying St. John healed the most dangerous illnesses no matter privately, or in crowd, and often eve in absence of the patient. At times it was enough to write a letter or to send a telegram to him, and the wonder of healing occurred. St. John healed not the Orthodox, but Moslemin, Hebrews, Lutherans, and foreigners that applied to him from abroad. Father John was endowed with that gift of wonder working for his great deeds - prayerful labor, rigorous fasting, and selfless devotion to God and love for neighbors."