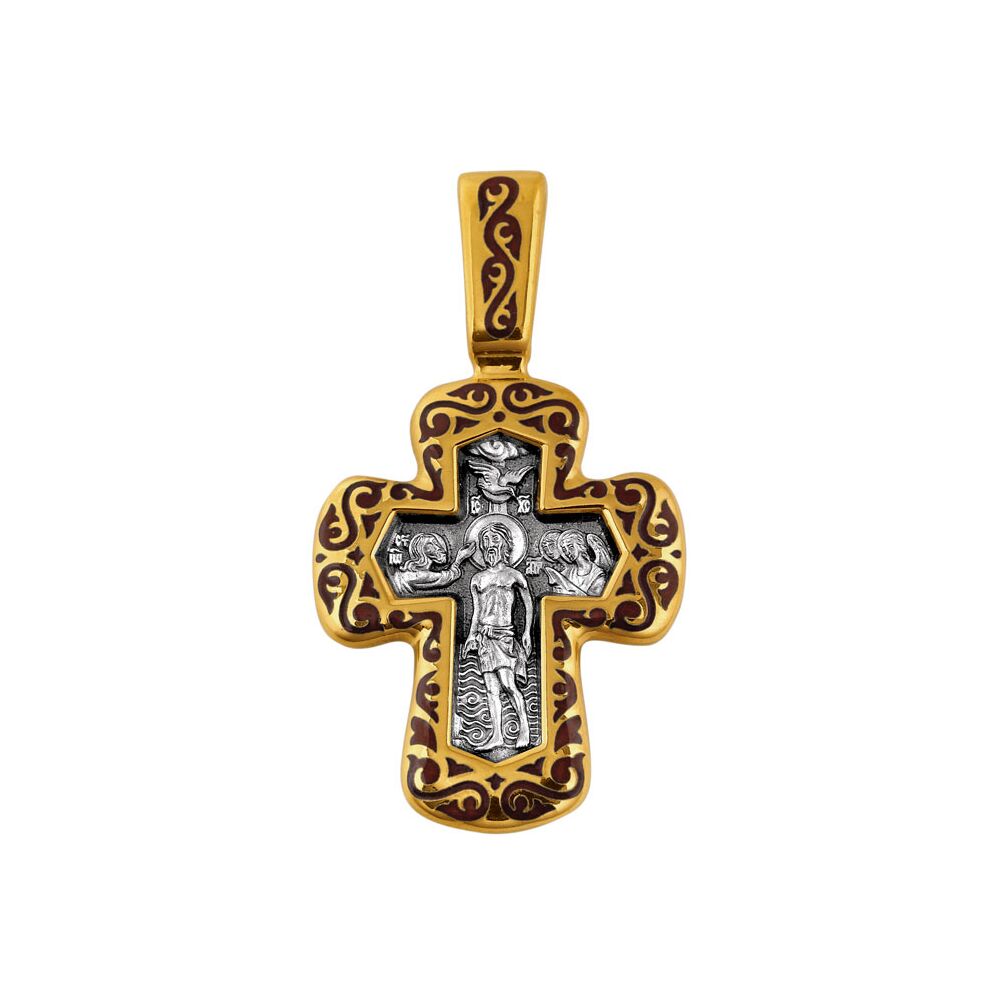 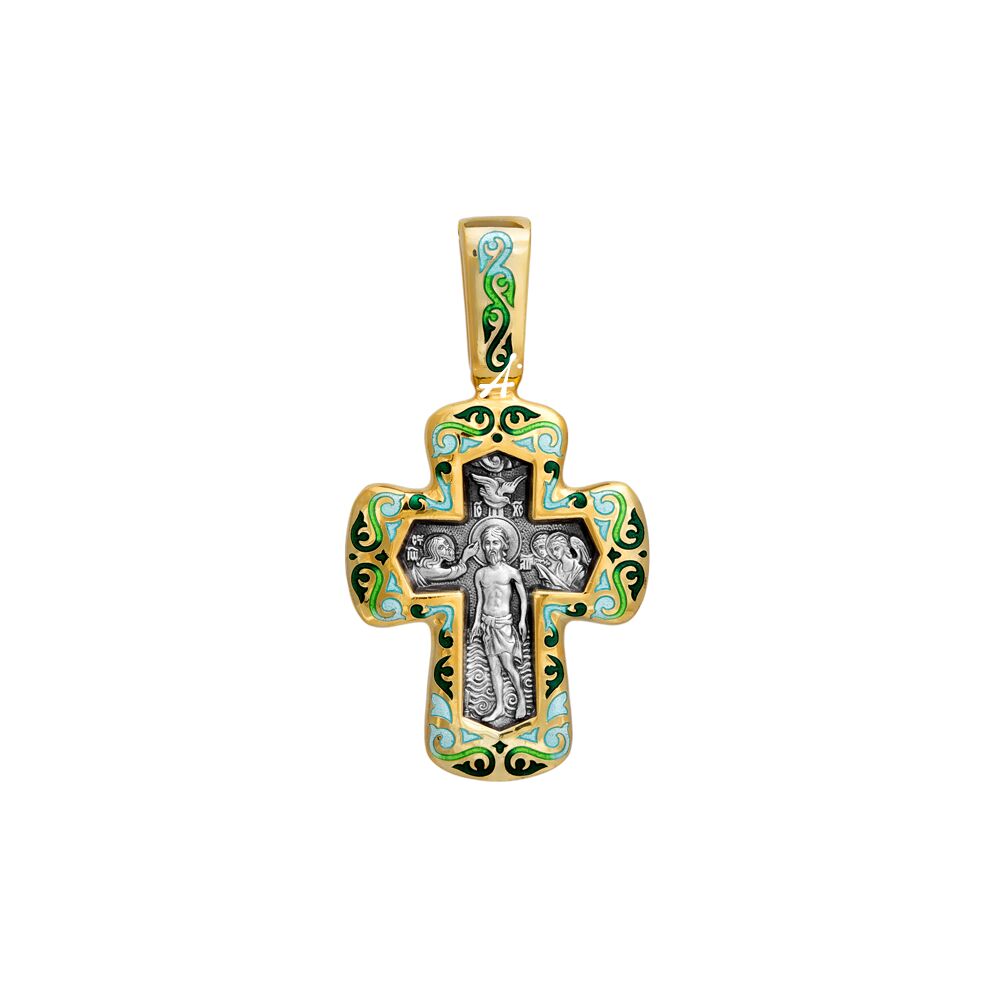 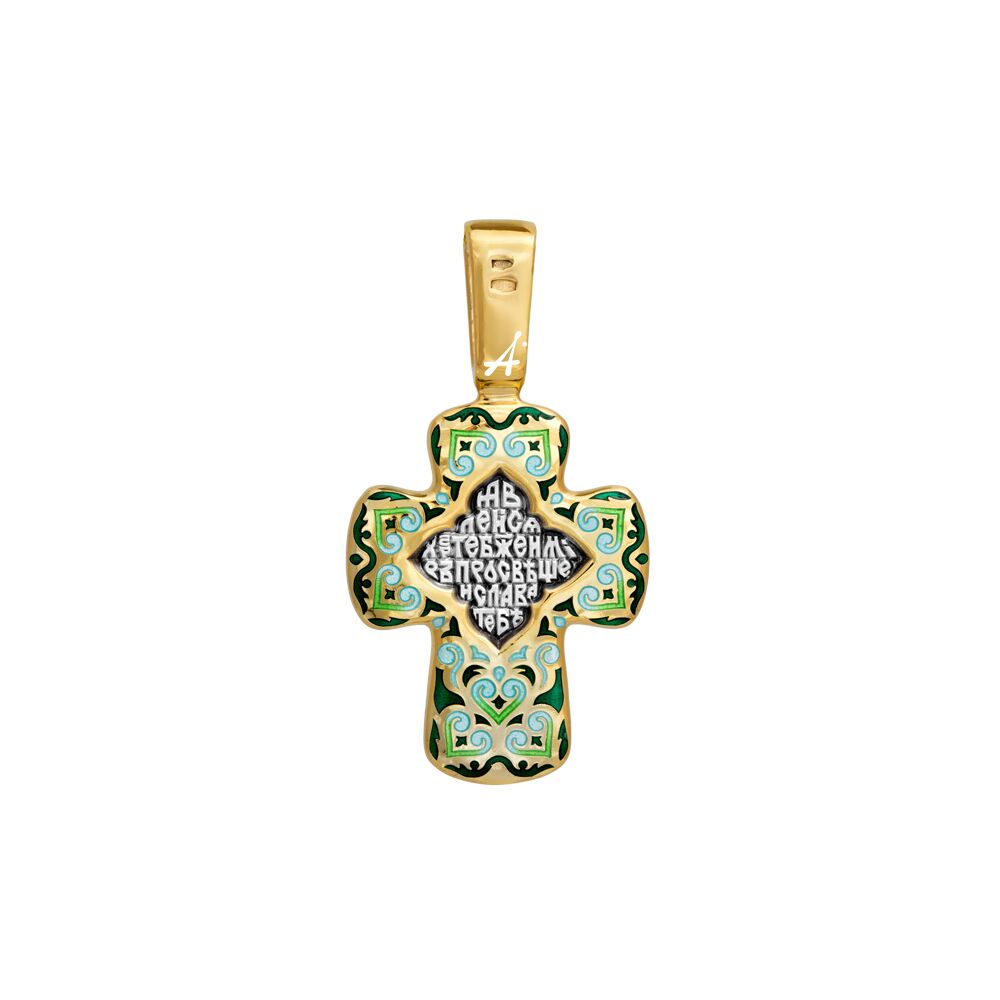 "A smart, enamel-decorated festive cross with an embossed icon of “The Baptism (Epiphany) of Our Lord” traces us back to the Old Russian tradition of festive crosses.

The Baptism (Epiphany, Theophany) of Our Lord is one of the Orthodox Great feasts that has been celebrated since the apostolic age and is regarded as one of the most remarkable events of the human history. “Let the day when the Lord revealed Himself as the Deity be held in high respect among you” – the Apostles Rule says. The Epiphany feast is celebrated in the same grand way as the Nativity of Christ whereto it is attached by Christmastide (from January 7 (December 25) till January 19 (6)), and presents as if one festival.  как и Рождество Христово, с которым он соединен Святки (с 7 января (25 декабря) по 19 (6) января), и составляет как бы одно торжество.  It was on the Eve of the Theophany that in old times the sacramental of baptism was held most often.

The festive icon of the Theophany depicts Jesus Christ standing in Jordan water. To the right of Him we see John the Baptist, Prophet, to His left being angels whose hands are covered with cloth as a sign of reverence for what is going on. Overhead there is the Dove descending from Heaven.

The Gospel tells that John the Forerunner was a great prophet who preached repenting and cleansing of sins by baptism. And many people came to him to the Jordan River for getting baptized. When Jesus Christ came to him, the Forerunner had been preaching and baptizing people in the crowd. The Prophet immediately spotted Him for and pointed to as Messiah who is the Savior, and said: “I ought to be baptized by Thee, and comest Thou to me?” (Mat. 3, 14). But Jesus replied that “For so it becometh us to fulfill all justice” (i.e. commitment and obeyance to God’s laws (Mat. 3, 15). And when Jesus was coming up out of the water, “the heavens rent asunder, and the Spirit as a dove descending upon him. And a voice came out of the heavens saying, Thou art my beloved Son, in thee I am well pleased” (Mc. 1, 10-11).

God the Father spoke from Heaven about the Son, the Son got baptized in Jordan water, and the Holy Spirit descended upon Him as a dove. Thereby during the Baptism of our Lord all Three Faces of the Holy Trinity, therefore the feast is called also the Theophany. Since early times the Baptism has been also called the Day of Enlightenment, since God is Light; and came to enlighten «them that sat in the region of the shadow of death» (Мф. 4, 16), and to save the fallen human family by His grace.

The Baptism of our Lord Jesus Christ is in extremely close connection with His whole theanthropic deed of humanity salvation, and is the beginning of this service. The Baptism of Christ in Jordan water is not only a symbol of purification, but has a renewal effect on all mankind.

The significance of Great feast of the Baptism of our Lord is revealed in the text of troparion, i. e. festal prayer, the final words of which are written on the cross reverse: “When Thou, O Lord, wast baptized in the Jordan, the worship of the Trinity was made manifest. For the voice of the Father bore witness to Thee, calling Thee the beloved Son. And the Spirit, in the form of a dove, confirmed the truthfulness of His word. O Christ our God, Who hast revealed Thyself and hast enlightened the world, glory to Thee!”

Having dipped into the water the Lord cleansed and sanctified it by His Grace, therefore since the early Christian ages it has been the rule to bless the water. According to a legend the office of blessing of waters has been composed by St. Matthew, Apostle and Evangelist.

The Epiphany blessed water in Orthodoxy is called the Hagia – a Great object of worship. Since the early ages Christians has had the deepest reverence before it. The sanctity of the water blessed on this day reveals also in the fact that it remains fresh and clean over a long period of time. A tradition has formed in Orthodoxy – never to mix the Hagia with any other water, and to take it on an empty stomach. But according to Church rules “those who have already partaken of something may also drink the Hagia according to needs”, since “dirtiness is inside us not as a result of eating, but as a result of our nasty deeds”.

Orthodox take the Hagia “for healing of soul and body”, and revere for its healing properties, therefore they cherish it throughout the year."